Had the opportunity to fish The San Diego yesterday!

Always seem to find yourself on a fish on that boat no matter what the conditions throw at ya.

Grab a seat while I relive the glory.

Left the harbor with bait loaded, well wait almost. Literally as we were about to clear the jettys Captain turns us around and says we left some people at the dock. We get back and there are 3 dudes waiting at the dock for the boat to come back and pick them up. (I will leave this part open for discussion as I know this will be a good one.)

Anyway, about a 3 hour trip to where we were headed, SW of coronado islands. Once we started looking for fish you could see the fleet on each side a good 5 miles from us but the captain must have been marking fish as he was zigging and zagging, probably chasing down a school of shy bluefin or who knows what. We started driving straight and the troller went off. Small 12lb hit the deck(0830), Captain announced to give it a shot here but did not sound very confident and really neither did I but its fishing and this could be wide open for all I know.

It wasn't, no action.

We get back to looking, spotted couple boils turned on it but never threw bait at it. Searched around that area while and see the dolphin stop close to us and they are on(0930). Not sure if it was the school we were looking for or what but we were out to find our own that wanted to play.

The second I realized I was getting frustrated, which is 100% against my whole code of fishing. I went back tied my 15lb back on, smaller #4 mustad hook, and it wasnt maybe 2 or 3 baits til i had another one on. And it kicked my butt. It took maybe a little longer than it should have, even on 15lb but i got it in and it was a nice grade, about 30lber 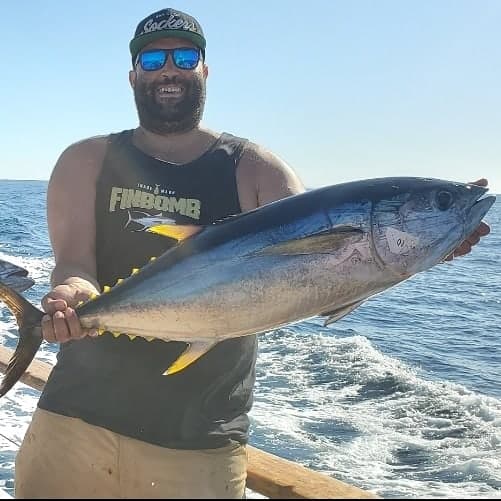 After that confidence was up and was able to pick 2 more off the next couple of hours.

The casualty rate was high for me and a lot of people on board. Me personally was 6 fish lost but did finish with limits.

This was a 1 stop shop for the boat, other than the troll fish, we stayed on this drift all day.

The bite was tough, I know this picture doesnt represent that, but only me and a couple other guys had self caught limits and other good anglers went home with 1 or 2. Most of the boat count, is the crew busting their tail and hooking and handing fish for their passengers which is awesome to see (especially the little kids fighting a tuna)

10/10 fishing operation, for real.
Super stoked to have this boat in our backyard. 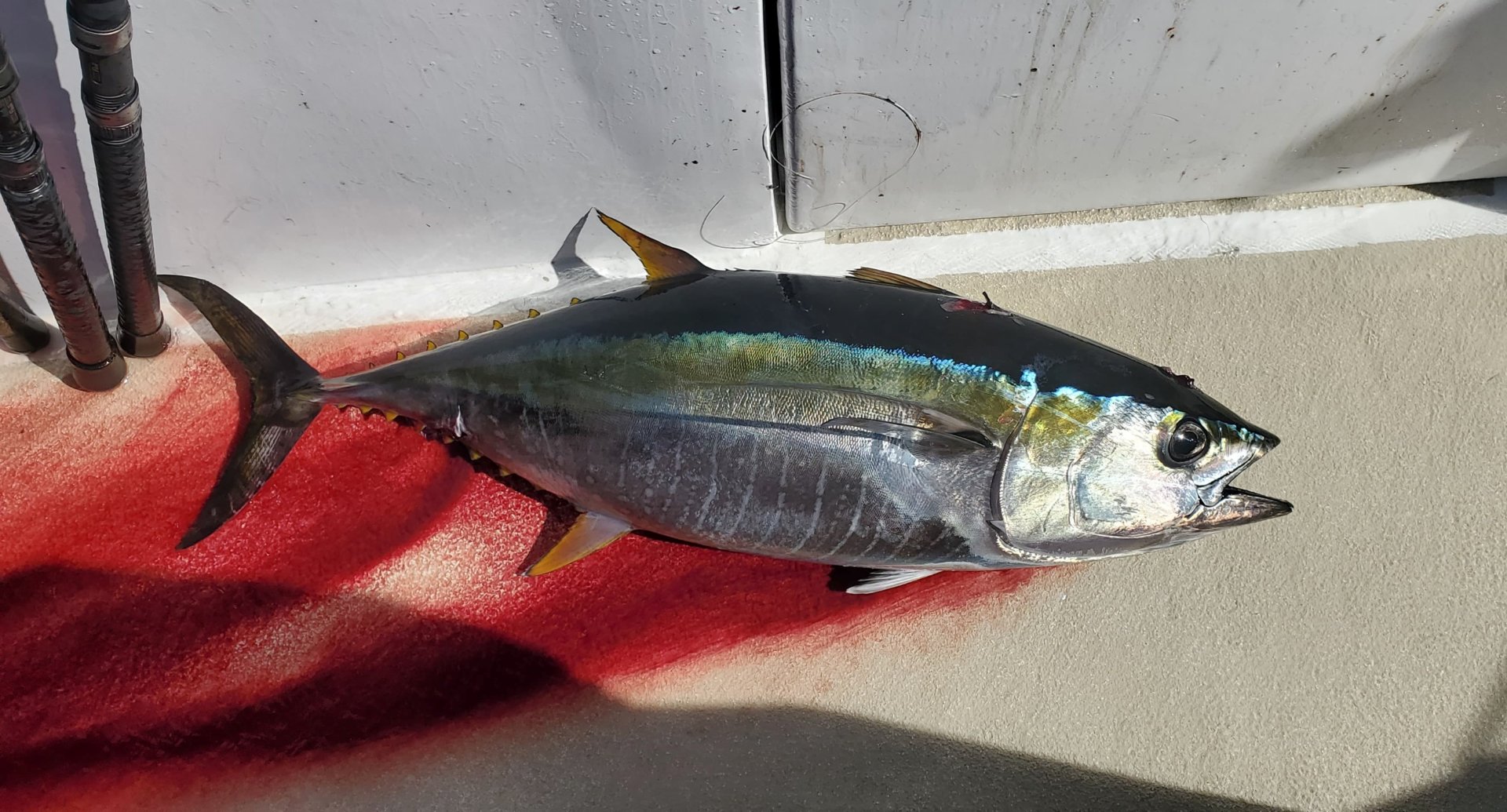 Thanks for reading, good luck out there!!! 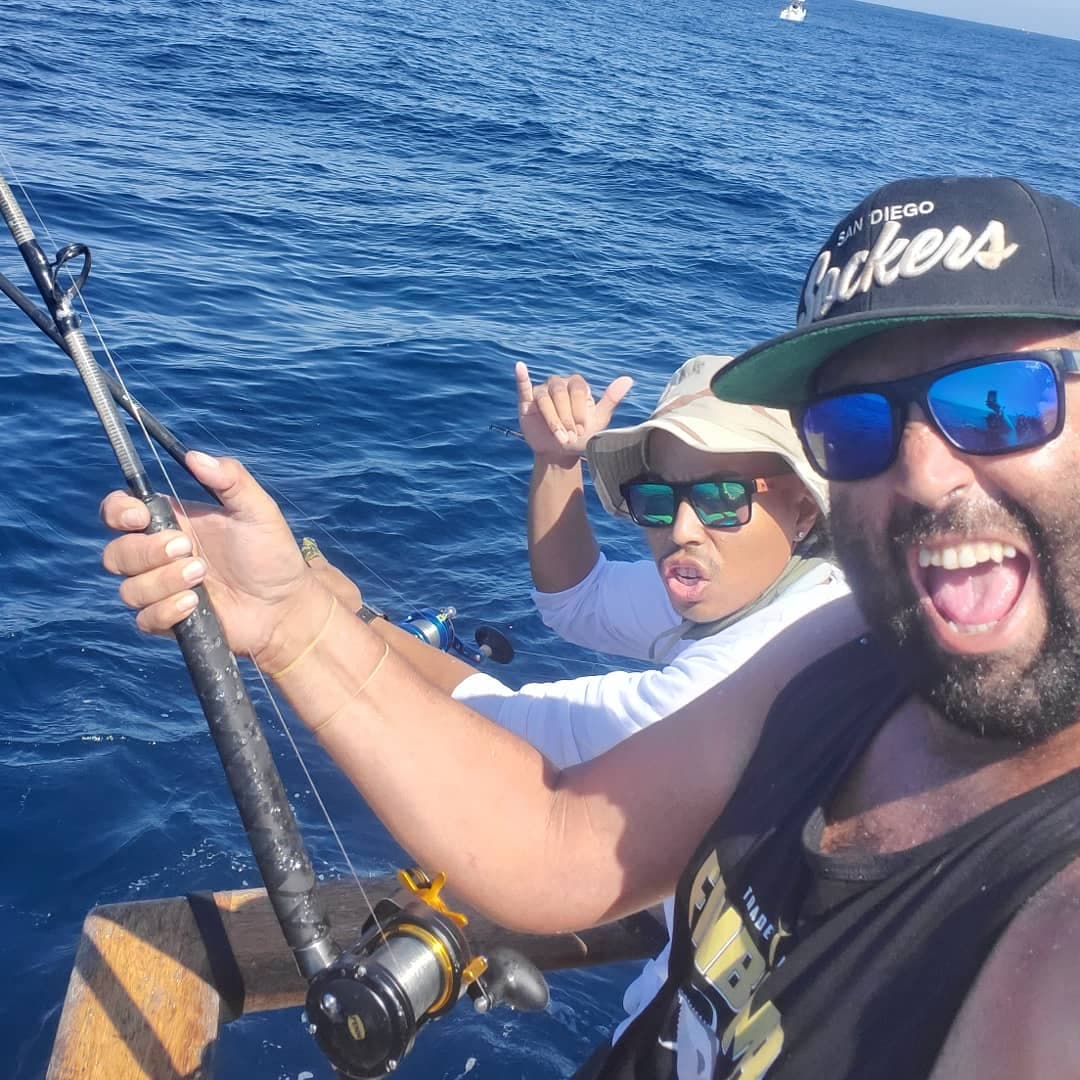 Thanks for the report, glad that you had a great day! I've caught a lot of tuna on 15# while on 6-pack runs, but every time that I get hooked up on 15# on a sportboat with a couple of dozen people I get burned off five times out of six because 15# line stretched tight just has no abrasion resistance, if it touches another line it pops. I'm glad that it worked out for you!
Reactions: zam

Limits and plenty to eat. Congrats and thanks for the good read.
Reactions: zam

Way to go !!! I fished the same boat Friday and couldn’t agree more, the crew and Captain are top notch.
Light line is the way to go, but ur gonna get your ass kicked before tiring out a 25 to 30 Lb Yellow Fin.
“I know I did”
I share your pain and frustration as well
cuz I had to one of last few people to land one on my trip.

awesome report. I was on the same trip and by no means was it easy. Hooking on 15 or 20 meant you were in for a 20 to 30 min battle. A minority caught limits, a majority caught 2 to 3, and small number caught 0 to 1. Crew was fantastic and hooked and handed plenty of fish. I tried fishing 15 but got broken off quick so I moved up to 20. We did well considering half the boat were new to offshore fishing. After catching limits I tried going for BF via rubberband sinker. I got bit 200 ft down but never saw color as the hook pulled out. I assumed it was BF. Seems we do well each time we fish together on the same trip. Let me know when you going out again! 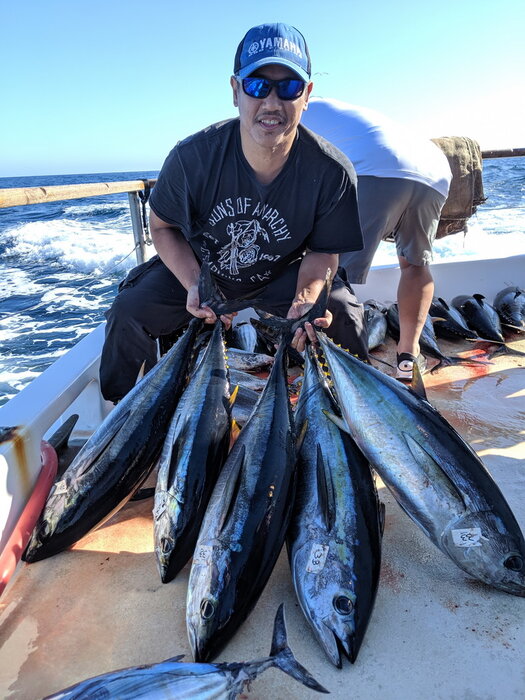 BTW we're still waiting for a round of drinks from the dudes who we had to come back and get at the dock. I overheard one of them say it was never announced to board. Uh, how do you explain the 42 other anglers on the boat knew when to get on? Captain did them a huge favor and I don't think the gratitude was ever returned. I might have been more pissed off if I didn't catch many fish, as that cut into our fishing time by 30 mins. Multiple that by 42 anglers.
Reactions: zam

Never heard of a boat turning back to pick up stragglers. Those knuckleheads were very fortunate recipients of a kindhearted captain. Very bad form if they did not show the proper degree of gratitude on top of their ineptitude. What comes around, goes around...
Reactions: zam

reggbruin13 said:
Seems we do well each time we fish together on the same trip. Let me know when you going out again!
Click to expand...

Haha that is for sure, definitely some great trips!!

I am booked again on the 19th hope to see you on it again for another round!

That day would have been much different if that school didnt stick around lol, not sure the guys who made us turn around would have gotten away so easily!

My arm is just recovering, was pretty sore from getting beat up on 15lb!!

Good fishing with you, see you soon!!!

Cheeseburger Killer said:
Never heard of a boat turning back to pick up stragglers. Those knuckleheads were very fortunate recipients of a kindhearted captain. Very bad form if they did not show the proper degree of gratitude on top of their ineptitude. What comes around, goes around...
Click to expand...

Honestly this is what makes the boat so successful. They fish very hard when the opportunity presents itself. But getting fish on the boat while managing 45 passengers, is an extremely tough task. They always seem to do it in a manner where they run a tight ship but will leave no passenger behind (literally in this case) when it comes to catching a fish or making the angler better from when they step on the boat to when they get off.