We left the docks around 7:30pm 06/24. Got bait and Capt. Gavin did his usual safety briefing, his plan was to go where others have not. Being that it was the weekend it was going to be a parking lot so he made the call and headed south, passed Ensenada. We fished the lower500 & 1140 Finger all day.

During our ride out the boat didn’t make any stops so no one got to do any night fishing. I was in bed but not deep asleep so I could hear the engine when it idled down and rev’d up. I assumed we got to the fishing grounds sooner but as I mentioned, I didn’t hear any announcement over the loudspeaker so I didn’t bother to get up. I finally needed to use the head so I got up around 5:30, had my coffee then 30mins afterwards the crew put out three trolling rods, doing the standard rotation. Caught bonitas on the troll and few on flyline. Stopped on a few small kelp patties and few anglers pulled 2-3 small (roughly between 5-10lb) YT at each stop. All morning the boat searched and searched and searched. Did not see any BFT. Before noon we pulled up to a decent size patty which held a good amount of YT. Capt. Gavin hooked one and handed the rod off. I’m estimating that YT to be around 15lb, which ended up being the biggest one caught. This was probably our best stop of the day, we managed to pull in at least 6-7 YT and a few bonitas, then off we went again.

While driving, Capt. announced that the water was green and he was not seeing anything so his plan was to head slowly back up towards home to see if he can get us into blue waters. As we got into bluer water, off in the distance I can see land (still no boat in sight), we saw a school of birds diving and Capt. announced to get ready. We slowly pulled up, Capt. announced these BFT ranged from 40-80lbs, deckhand managed to toss a stick bait and hooked one. Got that 40-50lb tuna on deck and then the BFT dove and was gone.

Continued searching and sonar picked up decent school that was down 150-250ft deep. We tried everything, from lures, knife jigs, colt snipers, fly line, sinker rig but no one got bit. By this time it was around 7-8pm. Around 8:30 I had called it a day and went inside the bunk, not asleep, just resting. Capt announced that he was marking a small school of BFT and he was going to give it a shot. I stayed in bed and didn’t get up. 5mins later and captain calls it. We have a long way home so we will be ending the trip here. Ended the trip with 1 BFT and 14YT and few bonitas.

The entire time, it was windy and waves were in the 3-5ft swells with 5-10sec breaks in between. White caps all day. I wouldn’t say it was calm nor crazy but for a small craft, it can be dicey. All in all, the crew worked hard getting a few tangles. One older gentleman was holding his colt sniper by the lure and while the wave was rocking the boat, another angler bumped him from behind, you can guess what happened next! The treble hook jammed into his hand.

Here's a picture I captured while aboard the PQ. lol 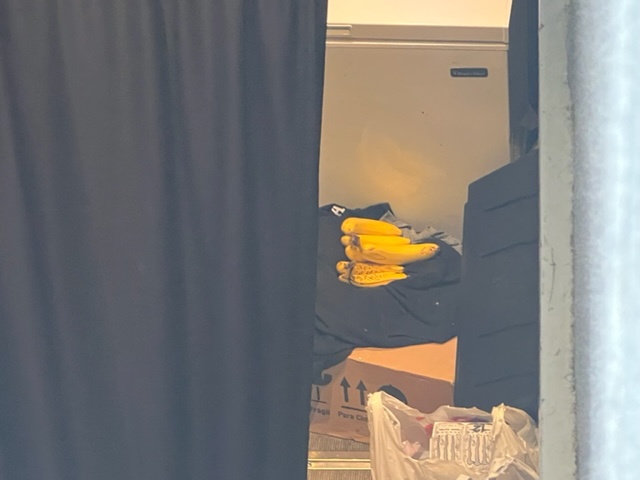 Not cool, did you figure out who it was
Upvote 0
S

No. I never mentioned it to any of the deckhands because that was the crews quarters. Their bunk room. So it was one of theirs.
Upvote 1

You should have fished SMB
Reactions: slixx1320
Upvote 0
M

aounds like people are done eating tuna hearts, next thing the boat needs to start serving bannas with breakfast and snacks. Both are bs and mean nothing anyway
Reactions: Richie030587, Salmon slut, short-range and 3 others
Upvote 0
S

MikeC. said:
aounds like people are done eating tuna hearts, next thing the boat needs to start serving bannas with breakfast and snacks. Both are bs and mean nothing anyway
Click to expand...

Actually, with the energy that fighting these big bluefin takes, a banana snack is an excellent way to recharge the lost potassium and other vital elements that your body uses in a long fight. Way better for you than a victory beer.
Reactions: Killerskiff, fishin_kid, slixx1320 and 4 others
Upvote 0

Thanks for the report I have been on countless trips like that, we can never guess when they want to bite thats for sure.
Toggle signature
JC
Reactions: Richie030587, terryc. and slixx1320
Upvote 0

Boat Name
Wish I Had One

Searcher has bananas for snacks and Banana Foster for desert on two trips with them. Great fishing in early June but last week was tough though there were numerous fish boated. The tiny size of the fish in bait schools seems to be the issue. We saw so many foamers over two days and the bft just would not consistently bite.
Reactions: Rich Fagner and slixx1320
Upvote 1

surfgoose said:
Actually, with the energy that fighting these big bluefin takes, a banana snack is an excellent way to recharge the lost potassium and other vital elements that your body uses in a long fight. Way better for you than a victory beer.
Click to expand...

Banana Beer... best of both worlds!

Toggle signature
"The path to your destiny lies in allowing the discipline of your dreams."
Reactions: Hntnhrd, short-range and slixx1320
Upvote 0

Man, I’m going out tonight on the PQ on a 1.5 day. Hopefully things turn around.
Upvote 0
S

GL!! Just go and have a good time is all I can say. I didn’t get anything but as long as I’m on the waters, that’s good enough for me!
Last edited: Jun 26, 2022
Reactions: Leo Montana, jer dog and tunacraze
Upvote 0

slixx1320 said:
GL!! Just go and have a good time is all I can say. I didn’t get anything but as long as I’m on the waters, that’s good enough for me!
Click to expand...

I was out this weekend on the pacific lslander .Saw an incredible amount of foamers. Swam sardines and chovie thru them for no love. Only 2 fish caught on poppers. Fish were keyed on micro baits. Tuna watching trip.
Reactions: slixx1320 and tunakillerjoe1
Upvote 0

slixx1320 said:
GL!! Just go and have a good time is all I can say. I didn’t get anything but as long as I’m on the waters, that’s good enough for me!
Click to expand...

Thanks. I got three fishing buddies I’m going with so should be good regardless.
Reactions: slixx1320
Upvote 0

Boat Name
Wish I Had One

Try swim baits. Deck hand on Searcher hooked a #50 model on what looked like a 3oz. with five inch tail.
Upvote 0

I can personally vouch for this.

Accurately written. I was on that same ride. Newly remodeled staterooms are super nice!

Hard to chase any foamers in that chop. BFT were deep, tough to corral up, they would not come up for chum. I did not even get any swings, zero bites. Boat Crew and Capt. worked their tails off the entire time.

That's why you schedule other trips. Now Mother Nature got in the way of this one. She will tire soon and give it all up.

That's right! I'm on the tribute in 2 weeks for their 1.5 day. Hopefully things will change by then, if not I have another trip on the Pacifica in Aug too. The only thing that sucked most about this entire trip wasn't even that I got skunked, but it was the expensive bill for the parking. $72!!!! Makes me wish the PQ was from Seaforth Landing.
Reactions: Yolo
Upvote 0

IC PQ got 1 bluefin. That Banana stuff is pure bullshit. Sailing banana boats often had Taratulas bite sailors onboard. How it got to sportfishing boats eons later is unknown. ONE TIME on PacStar we ran to the Dumper, hit the Motherlode of Albacore...caught 350 in less than an hour. Filled both holds and the slammer. To die for. When done I opened my backpack and boss who came along and I enjoyed 2 bananas. Potassium!!! Most/many times on longer trips, bananas are common in a big fruit bowl on 1 of the tables. Good for ya!
Trust me, fish don't give a shit about bananas when hungry.

I agree w/ you on the banana BS.. I don't eat them so it never crosses my mind as to whether or not I should bring some.
Reactions: Tunahead
Upvote 0

It has to be one of the lamest excuses for not catching fish I've ever seen in over 60 years.

slixx1320 said:
I agree w/ you on the banana BS.. I don't eat them so it never crosses my mind as to whether or not I should bring some.
Click to expand...

Trust me. If you're on the deck/rail a good 12hr day, some POTASSIUM helps keep cramps and other aches and pains away at night.

Many people have jinxes. Baseball players jumping over the foul lines inning over. Football
players with rituals in the end zones....

. I've seem so pretty intense but stupid arguments
over bananas on Sportboats a few times. Can only laugh.

In my younger days, early teens, I played basketball a lot, when we join tournaments, bananas was always something we brought with us so I know about the muscle cramps! lol
Reactions: Tunahead
Upvote 0
Show hidden low quality content

Offshore Relentless 1.5 day trip, Limit of YT, no BFT at all