I know its a late report but I had to share because I figured some of you would get a laugh.


We (Me Russell and Jason) left Dana Landing at 5AM on Wednesday 9/8 morning on Jason's 23 ft parker. Plan was to go straight to the Tanner Bank and find some good signs of the right kind and deploy the kite. Ride out was smooth and we start metering fish shortly before arriving. Water temp was 69 degrees and wind was less than 5 knots with no wind at all at times.

We deployed the kite and had our 1st hookup at 2:30PM. We battled that fish until just after 6:30PM when we lost her at gaff (more on that later). Seriously think we could have been close to the 400# mark with this one. As heart break and disappointment set in so did the thunder and lightning and NW wind at 20 knots. 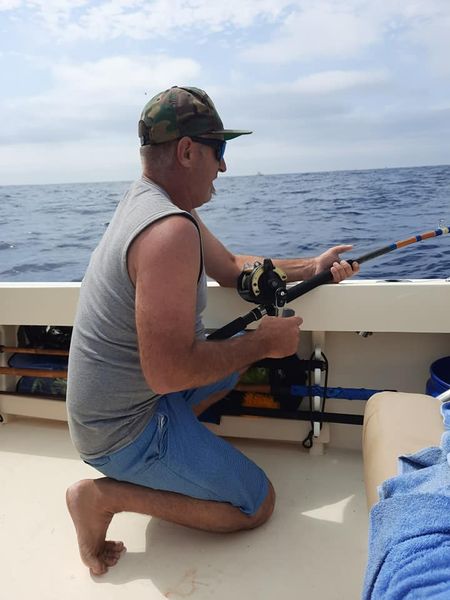 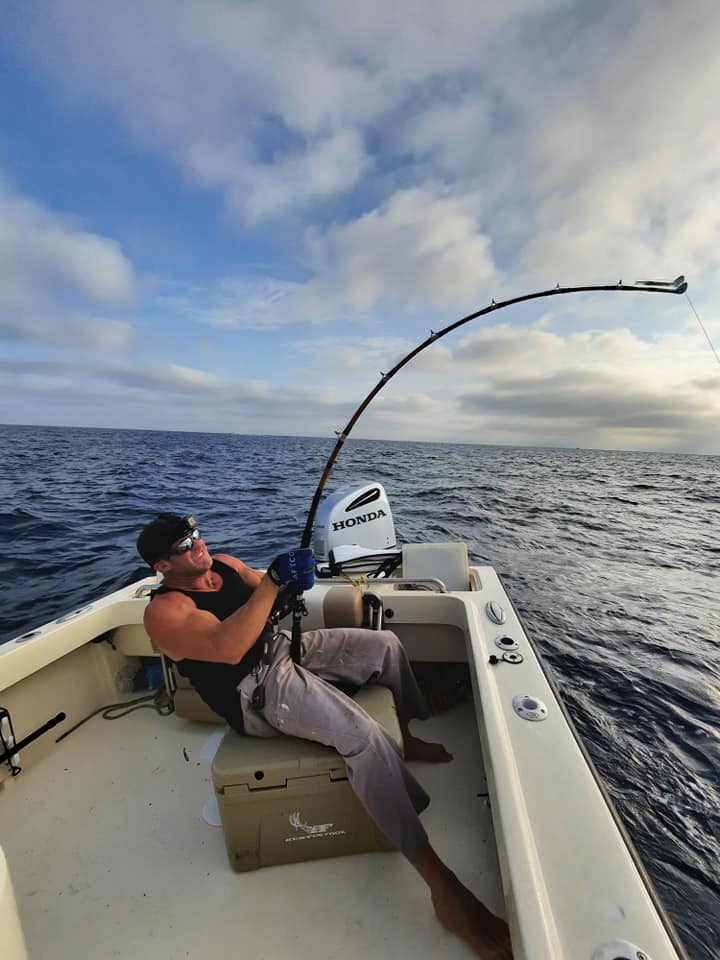 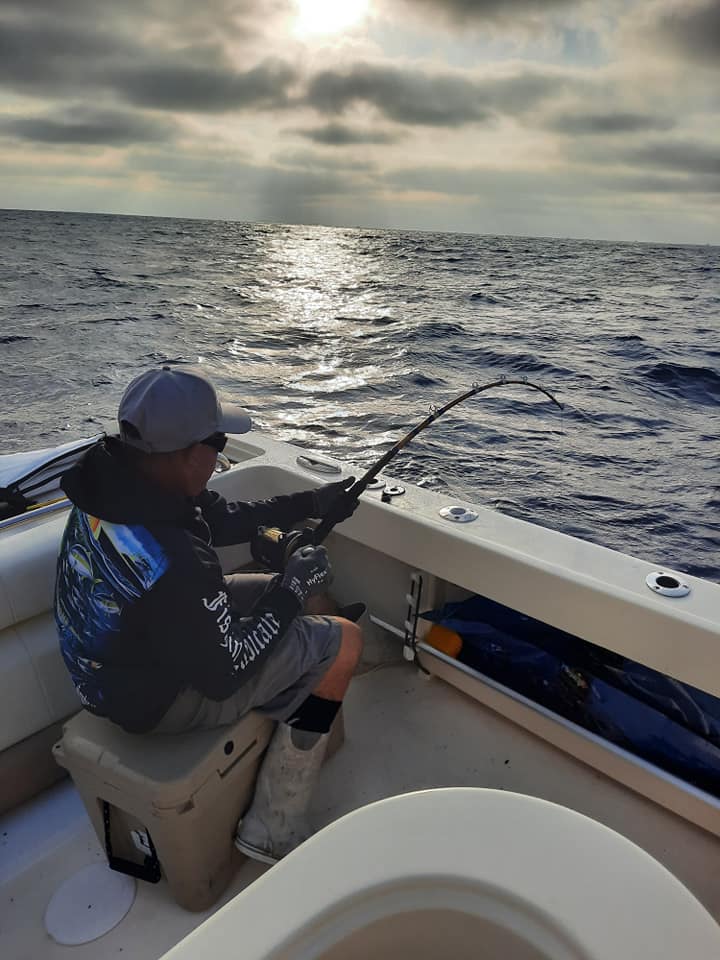 The following day 9/9 we start looking for the right kind again at sun up. The weather steadily got better throughout the morning and it turned out to be a beautiful day once again. We metered fish and had many blowups that did not stick. We trolled the spreader bars for a while with no luck. We did get a blowup on a nice sized mackerel that we sent out via the kite but that one did not stick either. Knowing that the bight did not turn on until afternoon the previous day we planned to keep fishing the afternoon bight. We found a real fishy area and watched several boats around us hooking up and put out a freshy and we were instantly rewarded. Russell handled the fish (roughly 170 LB) and we had it on the boat within 45 minutes. After bleeding and gilling it we decided to get a few pics and just then I see another blow up on our frozen dead flyer. I take the reel and boat another nice grade fish (roughly 220 LB) in less than an hour. FInally made the cow club woo hoo! 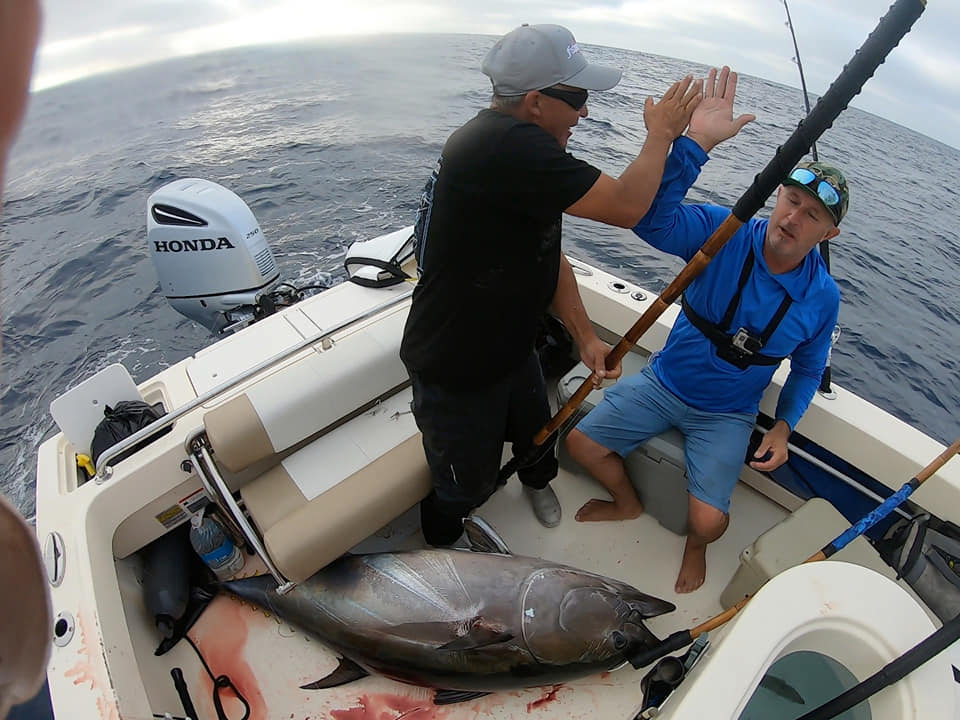 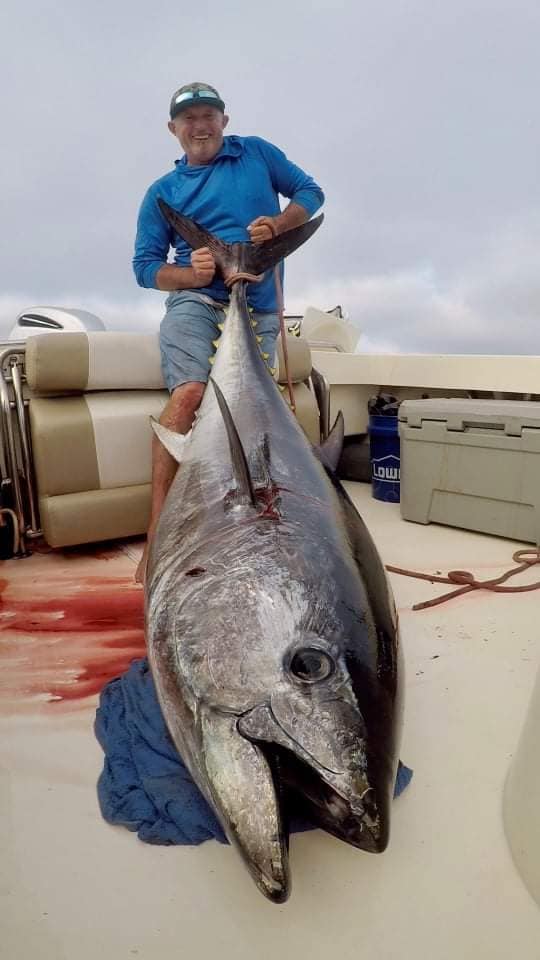 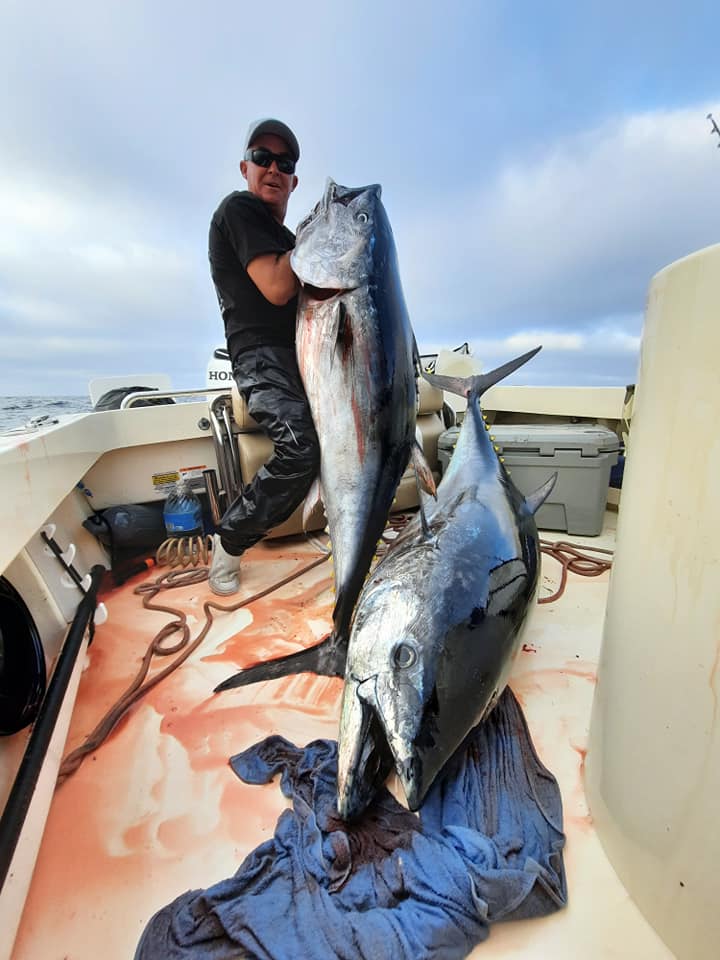 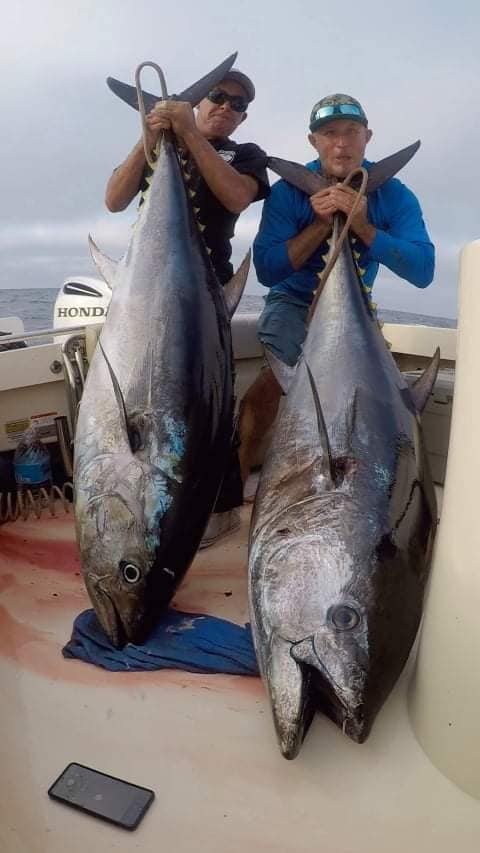 Now hopefully you are still reading this because here is where it gets funny. Russells post on social media included a little poem he came up with that was inspired by our trip.

Check it out below and hit the like button if you get a laugh.

Sit right back and I will tell you a story, a story of a faithful trip.. With 3 seasoned fishermen a balloon, and a little skiff..
We charged to the deep waters of the ocean blue, with one hundred and fifty gallons and one hell of a crew..
The time we spent tracking and mapping our course, led us to the banks past cortez of course..
By two o'clock we found our heading..
With just the right wind and no boats in sight we tied the balloon to the ol raggedy kite.. As we watch the fresh flyer glide away from the skiff we wait with anticipation, set up on the drift.. With simrad chirp searching for the mark, we saw the blow up that broke our hearts.. She hit that bait with such strong force we knew the reason we set this course..
The lines came tight and she began to run but little did she know we were on the other side of the gun.. With a head shake and jerk she found this was not fun, and from there is when she was on the run..
For hours and hours we fought this beast. This was The super cow to say the least.
Round and round we went, 6 hours later we all were spent.. over the rail and around the boat she was finally coming home with gaffes we gloat..
As the beautiful day turned to night, we steadily were gaining to win the fight.. But off in the distance we hear a roar.. the Crack of the lightning and the flashes began to soar..
We had her rite at the boat.. pinwheel to the top she was about to float.. with one last chance to pull the line, she gave it hell this one last time.. counter clockwise she began to spin ... it hit the trim tab and she was gone again.. Hearts broke frustration set in but this is the life when you chase the fin..
I want to thank my life long friends Chis B and Jason V for this epic trip.. the following day we landed 2 nice blues late in the day.. chasing schools and breezers.. but wanted to share this heart break as we see the post of the 395lbr brought home this weekend.. thank you all for following and for sure Keep It Tight!!! 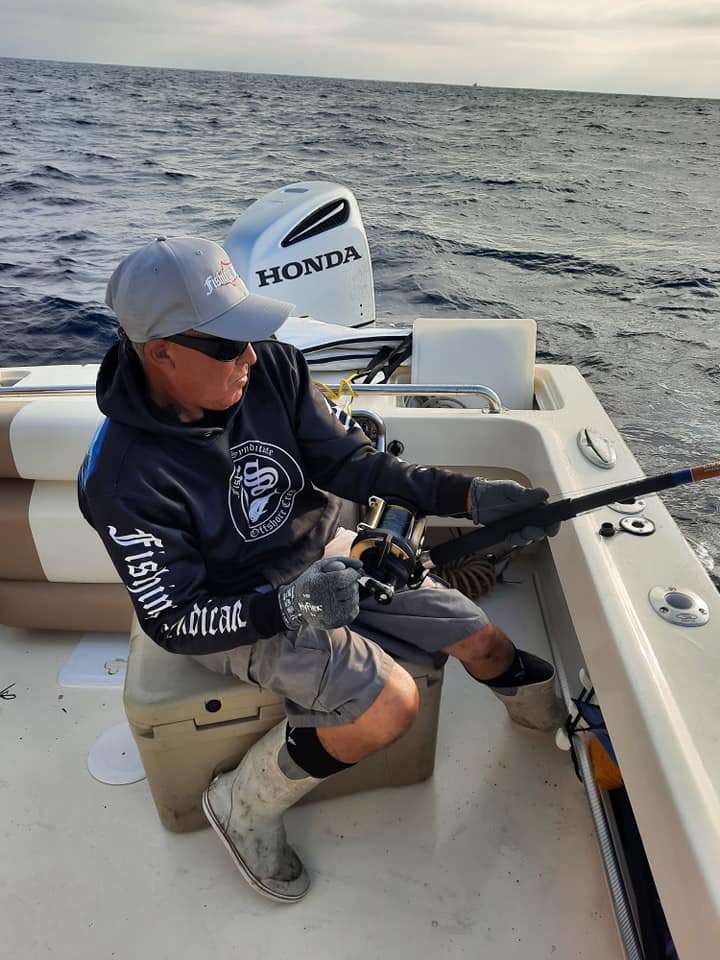 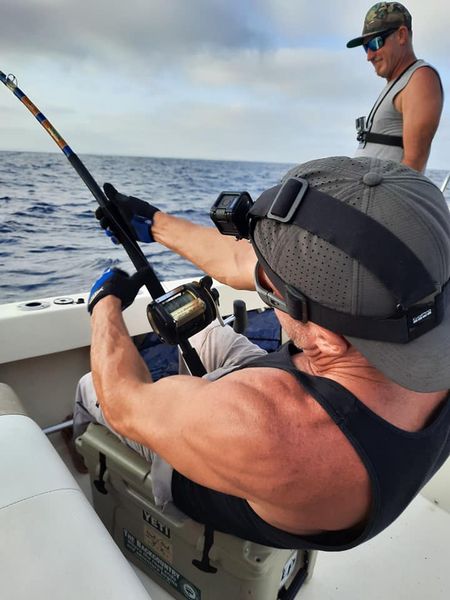 Great report fellas. I think I see a Shimano TLD reel you're working with. I also see other combos but can you give a brief breakdown of the gear? Thanks.
Reactions: Braggz
Upvote 2

guss said:
Great report fellas. I think I see a Shimano TLD reel you're working with. I also see other combos but can you give a brief breakdown of the gear? Thanks.
Click to expand...

I was using an Okuma Titus 50W with a custom Okuma Pursuit rod.
The other fish and the one we lost were on the TLD and a Seeker rod but not sure which one,
Toggle signature
Braggz-out
Reactions: locvetter, Chicago Pete and guss
Upvote 0

bragger said:
I was using an Okuma Titus 50W with a custom Okuma Pursuit rod.
The other fish and the one we lost were on the TLD and a Seeker rod but not sure which one,
Click to expand...

Yeah, had to be 50 size minimum. Figured as much. Way to go gents.
Reactions: Braggz
Upvote 1

What a great trip.
Reactions: guss and Braggz
Upvote 1

You guys killed it,how much fuel did you bring home?helluva truck out there.
Toggle signature
Follow The Money!
Reactions: Tunahead and Braggz
Upvote 1

pacificscout said:
What a great trip.
Click to expand...

Probably one of my most unforgettable trips yet
Toggle signature
Braggz-out
Reactions: Tunahead
Upvote 0

Yes. Did not sleep much though. tried to drop some flat falls and knife jigs for a while but the weather made it tough.
Toggle signature
Braggz-out
Reactions: Jeff Hannah and Tunahead
Upvote 0

marlyn said:
You guys killed it,how much fuel did you bring home?helluva truck out there.
Click to expand...

I think we had about 10 gallons left in the 150 gallon tank. battling that beast for 5 hrs really helped conserve gas.
Toggle signature
Braggz-out
Reactions: marlyn
Upvote 0

Great pics and BFT! Thanks for the pics and report.
Toggle signature
-AH
I get skunked and I can not lie
Reactions: Tunahead and Braggz
Upvote 1

Awesome report/info/pics and a great read. EPIC trip 2 days.
TWO nice ones...MoBetta than none by god. Solid Work!
Love working the good old TLD on one!

Back in day caught many.
Still have my old 20 I use for trolling. Still sings when bit.

Glad you guys stuck it out and had SUCCESS!!!
Reactions: Braggz and guss
Upvote 1

yah same as above thanks guys killer report getting ready to do that same haul soon!
EPIC
Reactions: Braggz
Upvote 1

Awesome and congrats!
Toggle signature
Thanks for your report. Hook up! Cory
Reactions: Braggz
Upvote 0

Great report! That is one hell of a trip for sure!

How long did it take you to get from SD to Tanner? How fast were you going? Did you fly line any sardines?
Upvote 0

SavageSon said:
Great report! That is one hell of a trip for sure!

How long did it take you to get from SD to Tanner? How fast were you going? Did you fly line any sardines?
Click to expand...

I think it took us about 6 hours and we were cruising at abut 20 knts. We did not take sardines but we did have about a dozen really nice Mackerel. We flylined a couple and slow trolled a couple for no luck but we did put one out under the kite and it got a blowup which did not stick.
Toggle signature
Braggz-out
Upvote 0

Great report, congratulations on the 200 club. Big balls running in a 23', glad it all worked out as some might get the impression this is an easy run but is anything but.
Reactions: Braggz
Upvote 0
Show hidden low quality content
You must log in or register to reply here.