Heidi V of Daggetts fleet catching the morning rays along with bait. 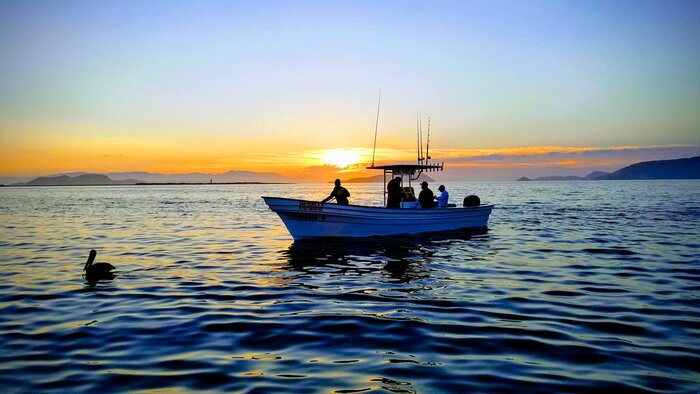 Toggle signature
It took a while but I'm finally Avet free!
Reactions: Lourdes, grahams98, fish&snow and 11 others
Upvote 0

captpop70 said:
Getting excited, headed down in two weeks....nice photo!!
Click to expand...

You'll have a great time - It's pretty much wide open right now.
Toggle signature
It took a while but I'm finally Avet free!
Reactions: Enrique Daggett and denis
Upvote 0

JC SPORTFISHING WEEKLY FISHING REPORT
As The Admiral Seas It
Fishing Report: 07/08/19 TO 07/13/19
Stop By Our Office for up to Date Fishing Report

MARLIN: FISHING STARTED OUT GOOD THIS WEEK MONDAY ONE BOAT LANDED A 280LB BLUE MARLIN PAST THE 1150. THE WATER HAD BEEN CHANGING WITH WARM WATER COMING IN FROM THE SEA OF CORTEZ. ON TUESDAY THE CATCH ME CAUGHT 2 STRIPED MARLIN ONE WAS ABOUT 180LBS. ON WEDNESDAY 2 BLUE MARLIN LANDED BOTH OVER 250LBS. AND 1 STRIPED. THURSDAY AND FRIDAY THE MARLIN BITE BEGAN TO SLOW DOWN AGAIN. TODAY BOB MARLIN LANDED ONE STRIPED MARLIN LANDED A COUPLE OF MILES OFF THE LIGHTHOUSE. THEY ARE COMING UP ON TEASERS AND HOOKING UP ON LIVE BAIT.

TUNA: TUNA FISHING WAS SLOW LAST WEEK. BOB MARLIN LANDED A COUPLE OF 20LB TUNA ON FRIDAY THEY WERE ABOUT 20MILES OFFSHORE. SATURDAY THEY MOVED OFFSHORE TOO FAR. SOME BIG YACHTS FOUND THEM OVER 30 MILES OFFSHORE ON THE PORPOISE.

DORADO: FEW DORADO SHOWING UP IN PAIRS TUESDAY THE CATCH ME LANDED 2 NICE DORADOS OFFSHORE AROUND THE 95 SPOT AND THE HORSESHOE BANK.WEDNESDAY BITE ME CAUGHT A NICE 25LB DORADO. THEY ARE BITING ON LIVE BAIT.

WAHOO: VERY SLOW FISHING FOR WAHOO, WE HAVE HAD A FEW BITES ON LURES.

Jc Sportfishing Charters is a family owned and operated business and has been fishing in Cabo San Lucas for the past 25 years. Jerry, explains that his charter business is geared more for families and novice anglers, making sure everyone who charters a boat with him have a great time and lots of fun. We welcome families, and groups. We want everyone who fishes with us to take all the sites in and have a memorable experience. This is what is most important to us. We have and do a few tournaments each year and can cater to fisherman who might be interested in tournament fishing.

STOP BY JC SPORTFISHING FOR UP TO THE MINUTE FISHING REPORT.

Please beware of the guys in the street selling boat charters. If you wait till the day you are fishing and go to the dock where your boat is many times people will mislead you to another boat or dock trying to put you on a boat that was not meant for you. You need to have a person guide you to your boat, who is from a reputable charter company. This way there is no confusion or misleading. Please remember when renting Sport fishing boats in Cabo that you rent your boat from reputable and established business. Walk into a fishing fleet office and ask questions about what you are getting and what are the costs? You don't want to rent boats from vendors in the streets and you do not want to book through shady websites offering you the world. Check through travel forums about reputable fishing fleets to deal with. Look for testimonials about the fleet your booking, your charter with. Ask about what will the boat be supplying? Will it include beverages or lunches? How much does it cost to fillet your catch? Check to see if charter boat is insured? Ask about getting your catch smoked? Check cost of a fishing license. These are just a few things to consider when booking your charter boat. We will be talking more about this in the next weeks fishing report. Until next time good fishing and we hope to see you in Cabo soon. Come by the office here in Cabo and get all the latest up to date fishing report.
http://www.tempbreak.com/index.php?&cwregion=cb

Triggerfishes are about 40 species of often brightly colored fish of the family Balistidae. Often marked by lines and spots, they inhabit tropical and subtropical oceans throughout the world, with the greatest species richness in the Indo-Pacific. Most are found in relatively shallow, coastal habitats, especially at coral reefs, but a few, such as the oceanic triggerfish (Canthidermis maculata), are pelagic. While several species from this family are popular in the marine aquarium trade, they are often notoriously ill-tempered.

The largest member of the family, the stone triggerfish (Pseudobalistes naufragium) reaches 1 m (3.3 ft), but most species have a maximum length between 20 and 50 cm (8–20 in).

The two pelvic fins are overlaid by skin for most of their length and fused to form a single spine, terminated by very short rays, their only external evidence. Gill plates opercula, although present, are also not visible, overlaid by the tough skin, covered with rough, rhomboid scales that form a stout armor on their bodies. The only gill opening is a vertical slit, directly above the pectoral fins. This peculiar covering of the gill plates is shared with other members of the Tetradontae. Each jaw contains a row of four teeth on either side, while the upper jaw contains an additional set of six plate-like pharingeal teeth.

As a protection against predators, triggerfish can erect the first two dorsal spines: The first (anterior) spine is locked in place by erection of the short second spine, and can be unlocked only by depressing the second, “trigger” spine, hence the family name “triggerfish”.

With the exception of a few species from the genus Xanthichthys, the sexes of all species in this family are similar in appearance.

The rather bizarre anatomy of the triggerfishes reflects their typical diet of slow-moving, bottom dwelling crustaceans, mollusks, sea urchins and other echinoderms, generally creatures with protective shells and spines. Many will also take small fishes and some, notably the members of the genus Melichthys, feed on algae. A few, for example the redtoothed triggerfish (Odonus niger), mainly feed on plankton. They are known to exhibit a high level of intelligence, and have the ability to learn from previous experiences.

Some triggerfish species can be quite aggressive when guarding their eggs. Both the picasso (Rhinecanthus aculeatus) and titan triggerfish (Balistoides viridescens) viciously defend their nests against intruders, including scuba divers and snorkelers. Their territory extends in a cone from the nest toward the surface, so swimming upwards can put a diver further into the fishes' territory; a horizontal swim away from the nest site is best when confronted by an angry triggerfish. Unlike the relatively small picasso triggerfish, the titan triggerfish poses a serious threat to inattentive divers due to its large size and powerful teeth.

Triggerfish males migrate to their traditional spawning sites prior to mating and establish territories. Some male species (i.e. Balistes carolinensis and Pseudobalistes flavimarginatus) build hollow nests within their territories. Triggerfish males are fierce in guarding their territories as having a territory is essential for reproduction. A male's territory is used for spawning and parental care. Most male territories are located over a sandy sea bottom or on a rocky reef. A single territory usually includes more than one female, and the male mates with all of the females residing in or visiting his territory (polygyny). In Hachijojima, Izu Islands, Japan, one male crosshatch triggerfish (Xanthichthys mento) has up to three females in his territory at the same time, and mates with them in pairs. Each male red-toothed triggerfish (Odonus niger) mates with more than ten females in his territory on the same day. Yellow margin triggerfish (Pseudobalistes flavimarginatus) also exhibit polygyny mating.

1 teaspoon dried dill, or to taste

Whisk soy sauce, rice wine, 1 tablespoon olive oil, hoisin sauce, fish sauce, oyster sauce, and juice of 1/2 the lime together in a bowl.
Heat 3 tablespoons olive oil in a skillet over medium heat. Cook and stir shallot and ginger until starting to brown, about 2 minutes. Pour in soy sauce mixture; simmer until slightly thickened, 5 to 10 minutes.
Score both sides of the pompano in a crosshatch pattern. Pat dry with a paper towel. Season both sides and inside of the pompano with dill, salt, and pepper. Slice remaining 1/2 of the lime and arrange slices inside. Drizzle remaining 1 tablespoon olive oil over pompano; rub over both sides.
Layer cabbage leaves in the bottom of a large baking dish; place pompano on top. Pour soy sauce mixture over pompano. Cover baking dish with aluminum foil. Let marinate as oven preheats.
Preheat oven to 400 degrees F (200 degrees C).
Bake pompano in the preheated oven until fragrant, about 20 minutes. Remove aluminum foil; continue baking until pompano flakes easily with a fork, about 10 minutes more.
Peel back skin and lift pompano flesh off the bones using a fork. Transfer to a serving plate.

Shake all ingredients over ice and then pour into a pint glass. Garnish with celery stalk, bacon, lemon wedge and green bean.
Reactions: denis
Upvote 0 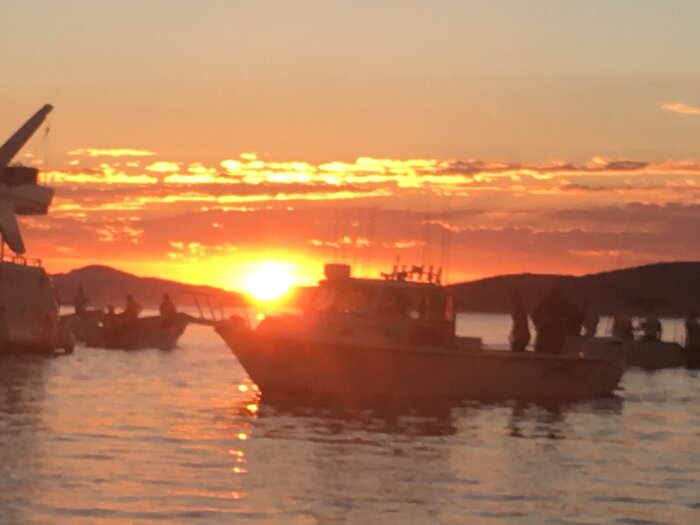