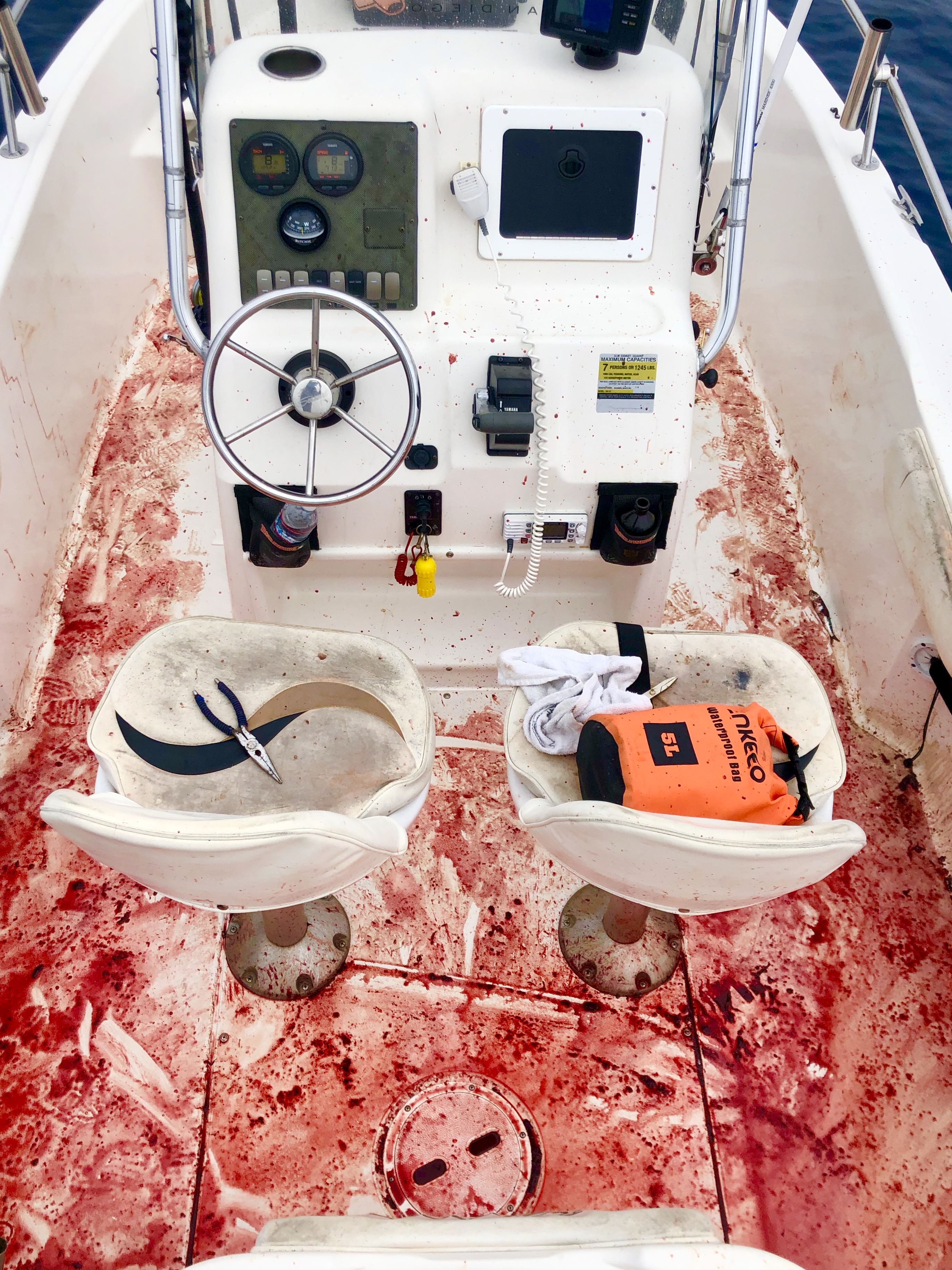 Yesterday really should not have happened. Was out on vacation all last week, and I'm having foot surgery on Friday which will have me out of work another 2 weeks. Include being super behind on a DIY bathroom remodel that has to finish before Friday, and a million other things that have to happen......literally the last thing I should have done is gone fishing. However, the prospect of missing the next 6-8 weeks of prime season in a walking boot had me desperate to get in one last irresponsible effort. With tepid permission from the wife, and a hard 12:00 PM time limit to get my boy from childcare, I threw my crap together and hit the ramp at 0345 to make the most of my limited time, and a fortunate weather window.

Then the universe told me to turn around.

Bow light quit, VHF wouldn't turn on, bait pump sounded like it had rocks in it, and backup bait pump (washdown) wouldn't turn on. Great. MacGyver'd most of the issues and headed out into the dark. Wind was up early and I started taking a beating. This is what I get for pressing the issue, apparently.

Things finally laid down, daylight came, and I got to work. Lots of birds in the area but no surface signal and nothing on the troll, not even the DTX (Ali you owe me $30). Was heading NW along a 2 degree temp break from the 230 to the 226 when my buddy boat and next door neighbor called me from the 425 that they had a couple tuna on board off foamers. Punched in the numbers and prepared to make the 15 mile run south, when I fatefully spotted a loan jumper way out in front of me. That turned into lots of little spots of small to medium grade foamers that I played whack-a-mole with for an hour, for nothin. Things were actually quieting down, and my time running out, when I was able to get in front of a small spot of 15 lbers that stayed up, close enough to dump a dip of bait on them.

Then all hell broke loose.

My chum instantly got destroyed, with bigger fish blowing up all around me. Oh snap! I got a bait in on 30lb but it wasn't getting picked up. Brailed another dip, set the rod in a foreward holder, and threw another bait out on 25lb fluoro-stretch, 2/0 Owner mutu. Bit, instantly. Finally!

The fish felt decent but didn't give me too much trouble, and came up tail wrapped. I gaffed him and got him on deck and was staring at a fat 40 lb yellowfin. Immediately my 30 lb rig starts singing from the bow - I had totally forgotten about it. Dropped the rod and gaff and grabbed that rod. 10ish minutes later I gaffed another beautiful grade yellowfin. Set down the gaff, grabbed my first 25lb rig I had unhooked during fight #2, pinned on another bait, threw it out, and got smoked instantly. 3 baits, 3 bites. This fish kicked my ass. Took my time with it while throwing 1's and 2's and called in my buddy. Fish were eating the chum baits right off my transom. Finally got this one in, a 30-35 lb class bluefin this time. Really contemplated taking a breather, but since I'm a glutton for punishment, I grabbed my 60lb 2-speed "just in case" setup, cut off the trolling clip, tied on a 4/0 j-hook, threw a bait off the bow......picked up instantly. 4 baits, 4 bites.

I gaffed this fish (another YFT) right as my buddy appeared. I started hand-feeding 'em off my transom until he slid in, threw a full dip, and they doubled-up right as I backed away. Textbook.

I watched them for a while throwing bait at them until I ran out, hosed off my deck, and pointed for home at 11:00. Perfect morning, despite the rocky start. Very grateful I found a biting school in a sea of picky fish. I recommend trying to get bait on these fish instead of chasing foamers. This school was actually on the cold side of the break, 66 degrees. Bait was good from SD. Weather really nice, but I know it's supposed to get sporty today. Go get 'em! 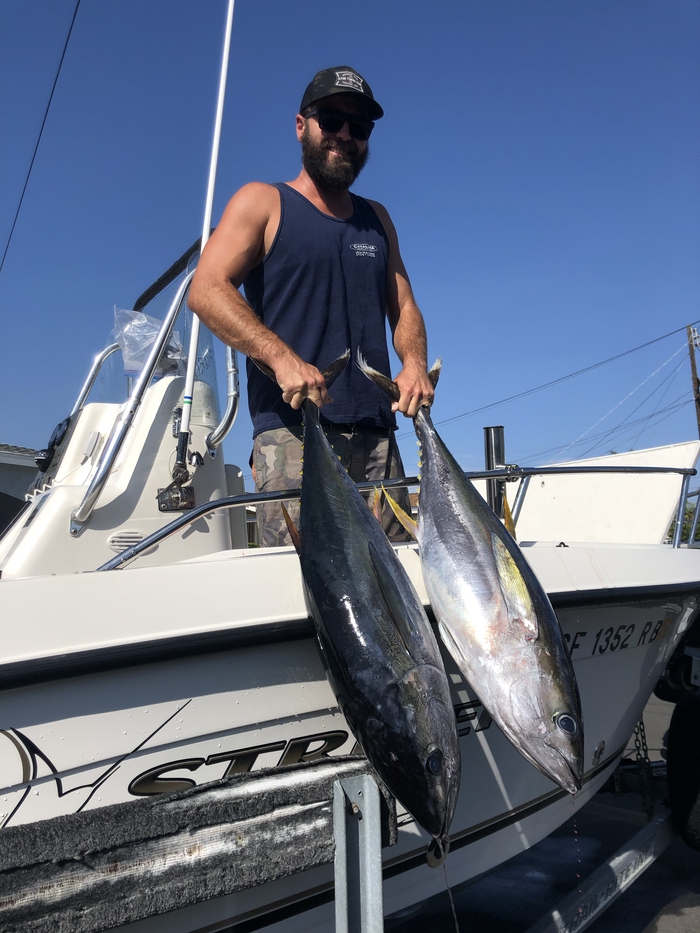 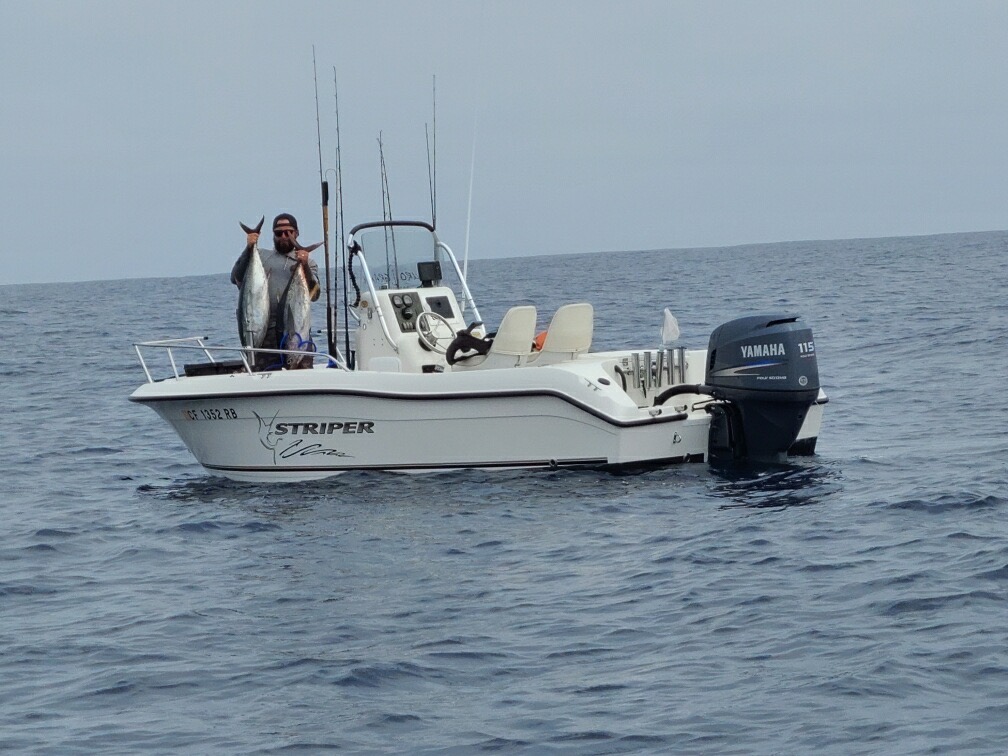 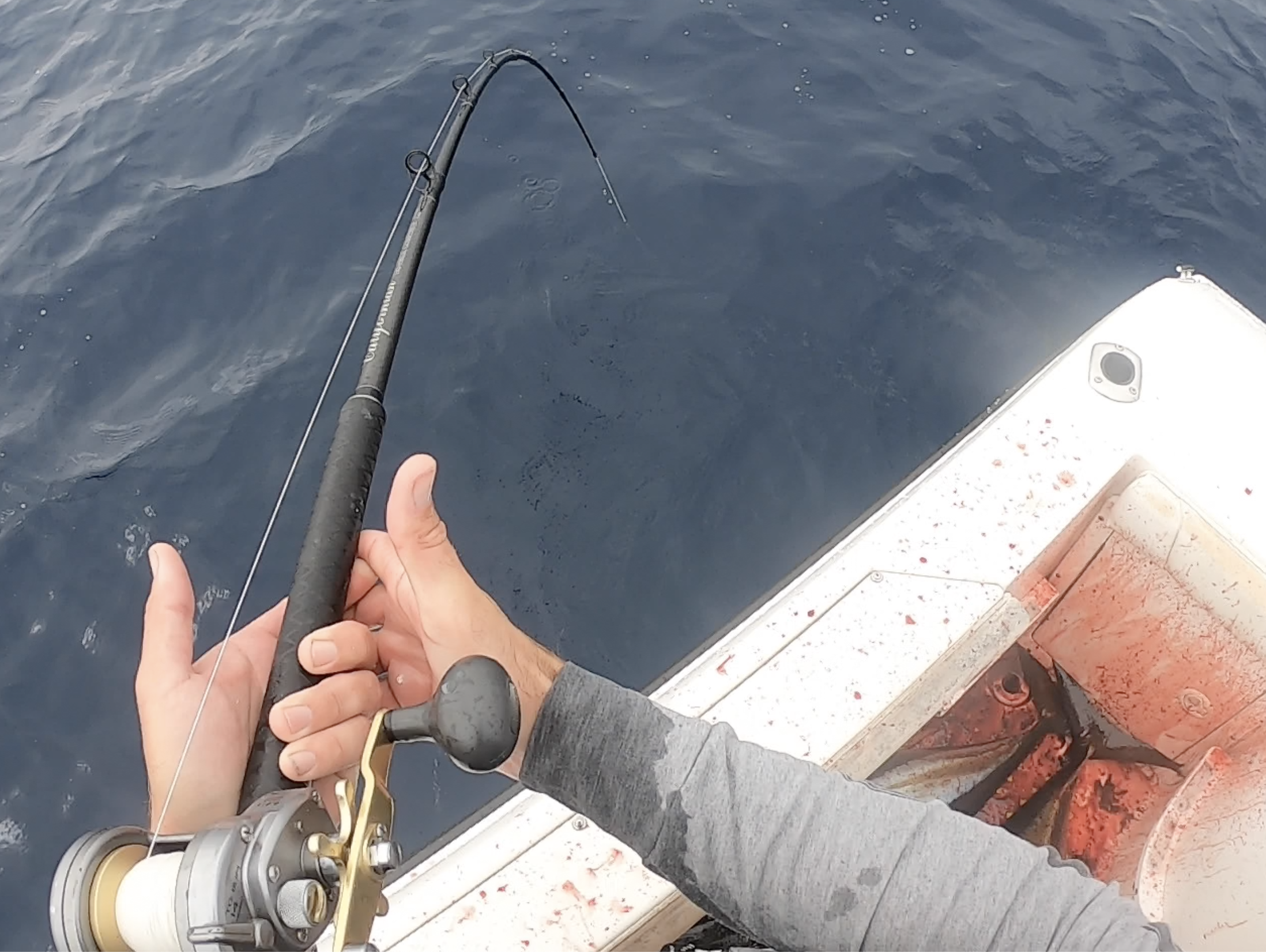 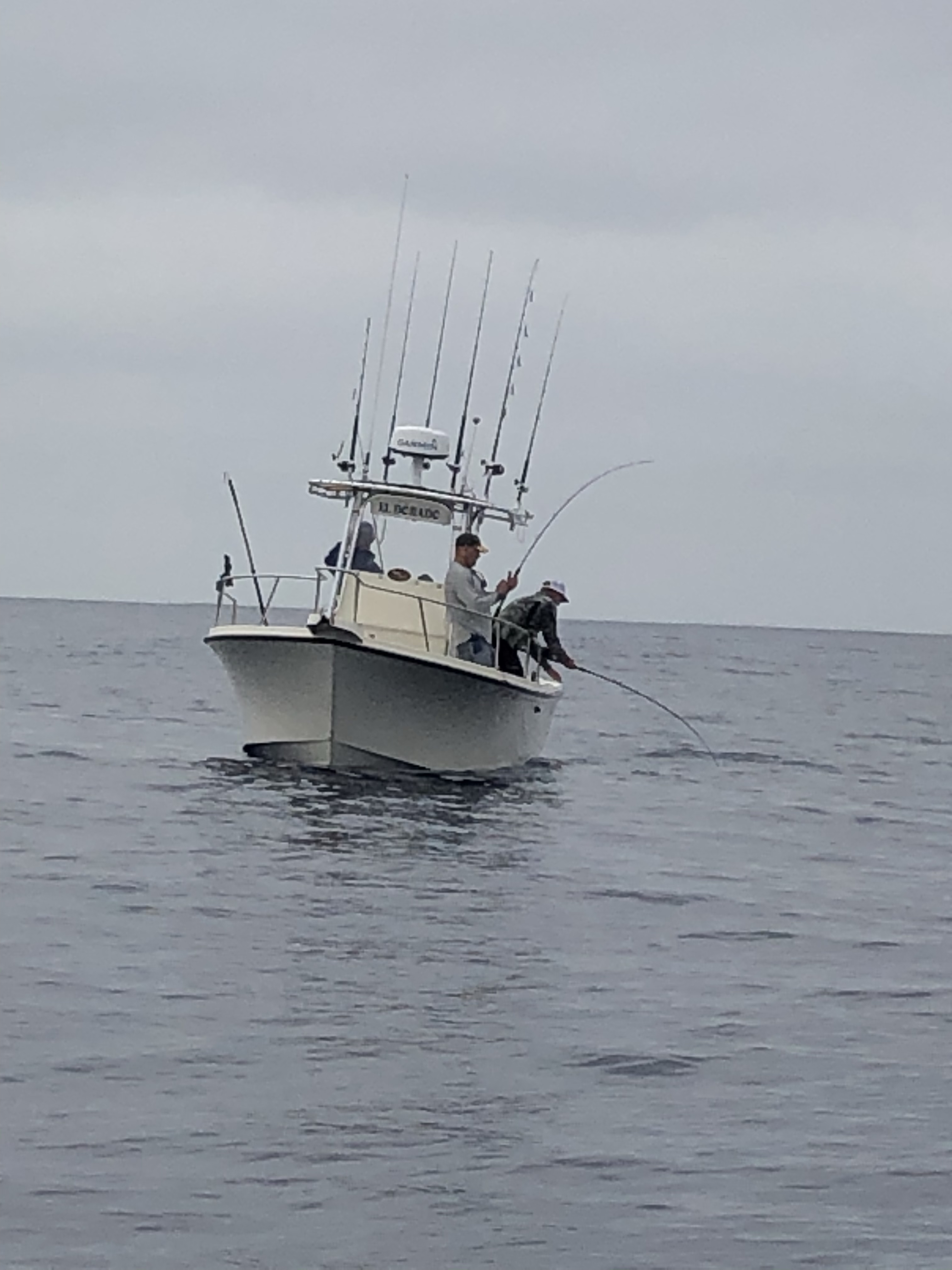 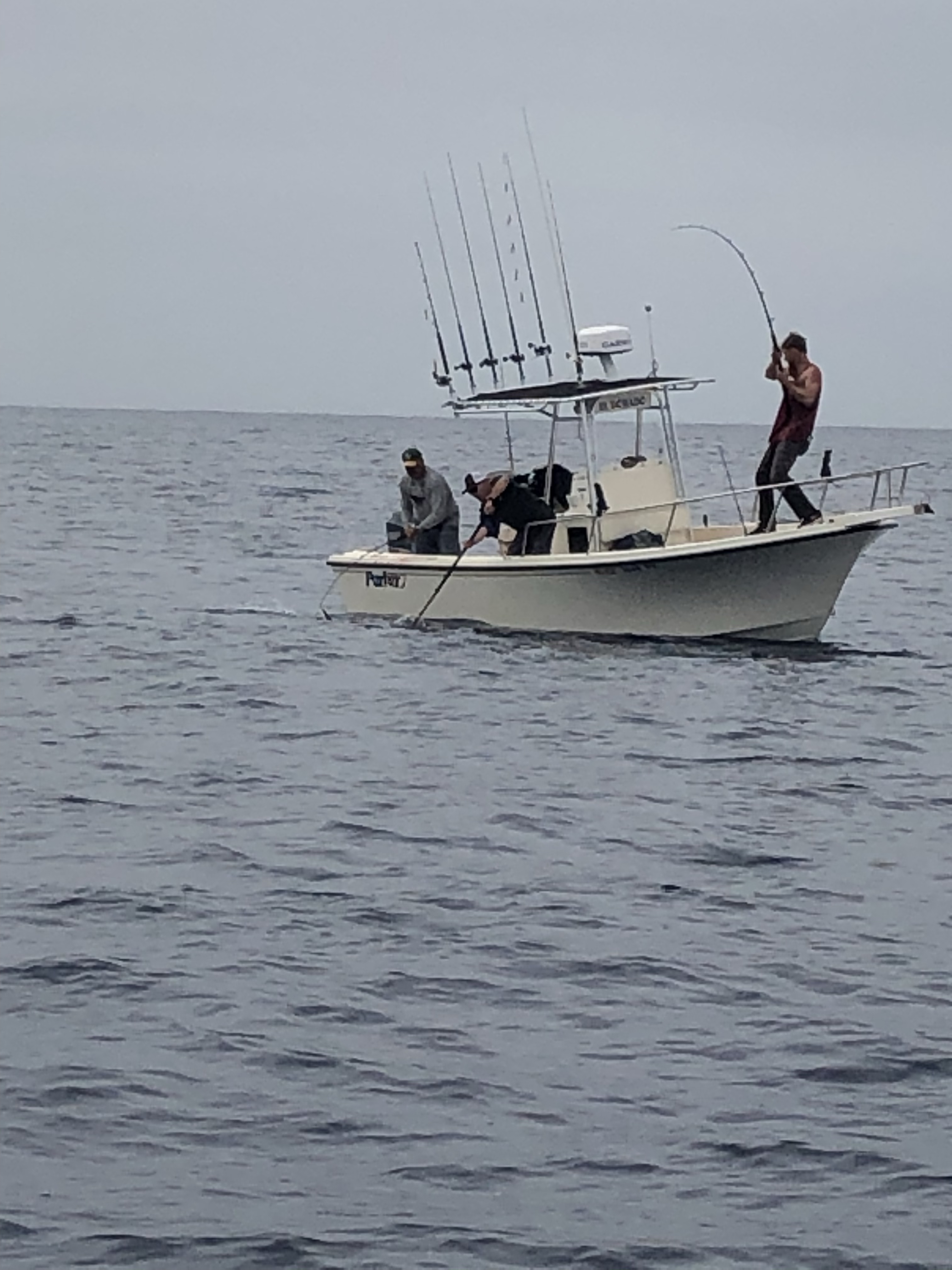 You fucking animal you!!!!! Love it!!!!
Reactions: Geo-Fish and Baja Belk
Upvote 0

You the man! Nice work bud way to make it happen!!
Reactions: JoshInSD, Geo-Fish, Willdoggy and 2 others
Upvote 0

One of the most kickass videos I have ever seen. Wow
Reactions: Geo-Fish and Baja Belk
Upvote 0

No refunds on the Nomads!
Reactions: karlk1125, Willdoggy, rojo loco and 5 others
Upvote 0

Awesome on the solo trip!! Love how you are trying to handle the gaff and the pole!! haha
Reactions: Baja Belk and rick rouland
Upvote 0

tightass, give the guy his $30 back !
Reactions: Willdoggy and Baja Belk
Upvote 0

Totally dug the toss in a bait and instantly get picked up. My heart started beating hard!
Toggle signature
If you stay on a boat long enough you are bound to catch a fish!
Reactions: onehottip, Baja Belk, Peg North and 1 other person
Upvote 0

Did you bleed the fish and drag it all around the boat?
Reactions: Baja Belk and pacificscout
Upvote 0

That video was FUN!!!
Toggle signature
I CATCH IT. I KILL IT. I CLEAN IT. I DON'T DELIVER IT!
Upvote 0