Early Season fishing is always tough. The weather is still unpredictable and conditions change rapidly. My first trip of the year was going to be on the Ultra with the usual crew. I was very much looking forward to being on the water after the 7-month winter hibernation. Last years first trip of the year resulted in a 6olb personal best Bluefin on the Tribute, but I wasn’t quite sold on the Tuna action just yet this year (maybe now lol). I was going on the Ultra no matter what! Conditions were looking good early in the week, water temps were warming up and chloro looked good. Then came the weather… rain on Tuesday, wind WED, THURS, and FRIDAY WTF???? Water temps took a tumble to the 50’s and all of the water went green! The Catalina sea bass trip was not looking so hot. Regardless, I was prepared for a boat ride if need be, juicy cheeseburgers and a day on the water is never a bad idea.


For those of you who have never had the pleasure of fishing the Ultra out of 22ndstreet, here’s a few reason to hop on a very rare open party trip… It’s a 50ft boat that only takes 10 people. Its got plenty of bait capacity, did I mention it s a squid boat too? Fish brine for keeping the catch 100% Of all things, the crew is top notch! I have been fishing with Jacob, Mike, JOC, Dom, and Chris for several years and I can personally tell you they bust their ass for you, always go the extra mile, whatever it takes! No drama teamwork! Hard to find on the water these days.


Mike was running the boat this trip and he made sure we had candy (live squid) for the trip to give us the best odds despite weak reports and poor conditions. It was decided to take a shot at San Nicholas Island for the overnight trip. Jeff on the Freedom picked up a few yellows the day before, and the swell was dropping on the buoy that will give us the window we need.


It was a still a rough one, around Osborn I think everyone was awake until we got in the shadow of the island. We arrived at 4am and anchored up inside. We flipped on the under water light to try and make some more squid but every time it look like a school was gonna bundle up the juvenile seals would attack it like kamikazes. We tried to fish dropper loops with squid in the dark but the seals would not back off. They stole baits off the bottom, even ate a flat fall and a lead head! Crazy! Once grey light came around the seals backed off the boat and we started to fish again. 6:30 hit and we hooked 5 or 6 yellows in about 10 min (I got 1), most were 25lb models but 2 were jumbo 35lbs easy. Then silence….. no sonar marks…. Nada for 2 hrs. The wind started picking up and it was decided to do a few drifts to try and pick up the spotty fish.


First 10 min we picked up 1 yellow, and then I got bit again. I had a quick bend, moderate resistance, then heavy line peeled off (maybe a jumbo?) but then went back to weird moderate resistance and line retrieval felt weird with the absence of headshakes. Deep color went from brown to white and it was a halibut!


I have never caught a California Halibut, only a few in Alaska. I never really fished for them either because I’m usually chasing Pelagics, whish is also why I have not caught a WSB.


I stepped back on the deck so Chris Kiser could gaff it. I never got a real good look at it in the water. Chris paused as he lifted it and told Mike to get the camera for a rail shot. He lifted the slab over on the deck and I was surprised of the size… were in California right? Lol. That’s when it sunk it… this is a really big halibut for California….


We took a few pictures, tossed it in the brine and continued fishing. No more yellows found so we finished the day with the rock cod fishing.


The boat didn’t have a scale, Chris and I both thought 50lbs. but.. that was just based on experience. I caught a 44” halibut in Alaska that fit the “slot” that weighed 45lbs That was really my only frame of reference other than my arm scale. Still out of cell phone range we taped the fish out to about 50”, so I thought my estimate wasn’t too far off.


We passed 2 harbors on the way and I picked up enough signal to google the California record information.


The record fish was 67lbs 5 oz that measured 44.5” with a 39” girth. I was pretty sure mine didn’t weigh over 60lbs but who knows? With a full 5” more length on my fish I was surely puzzled and intrigued at the same time. We contacted the landing and they reported that their scale was inop at the moment. Luckly the boys a Pier Point were kind enough to let me rush over there and hang my meat so to speak.


56.3Lbs! Not bad! Not the record but certainly a fish of a lifetime. The whole drive home from Long Beach to San Clemente I was puzzled…. The tape said 50”?!?! Im so confused….


I laid out the fish on my driveway and started making the cut down the middle and stopped. Im not crazy….. I taped out the fish again…. 50” long, and measured the girth tightly 38" with the fins folding in. My wife was kind enough to help with the photos!


I guess it would be a fish story then huh?


Great start to the year! I just want to thank the Ultra Family (Mike, Jacob, DOM, JOC, Chris and Kelly for everything! And Tom Mato for always putting together a great group of hardcore fishermen and women! Limits of Fun! 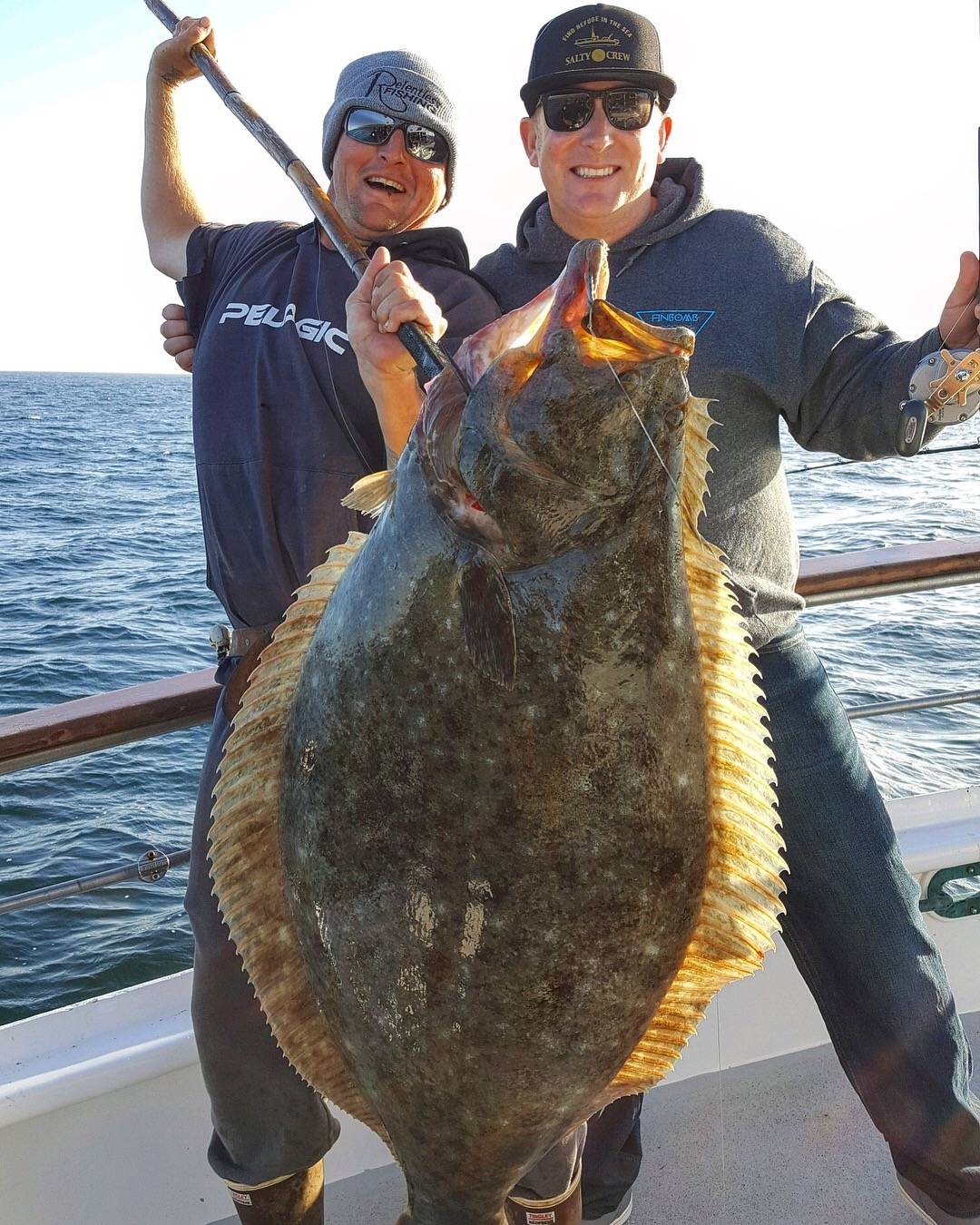 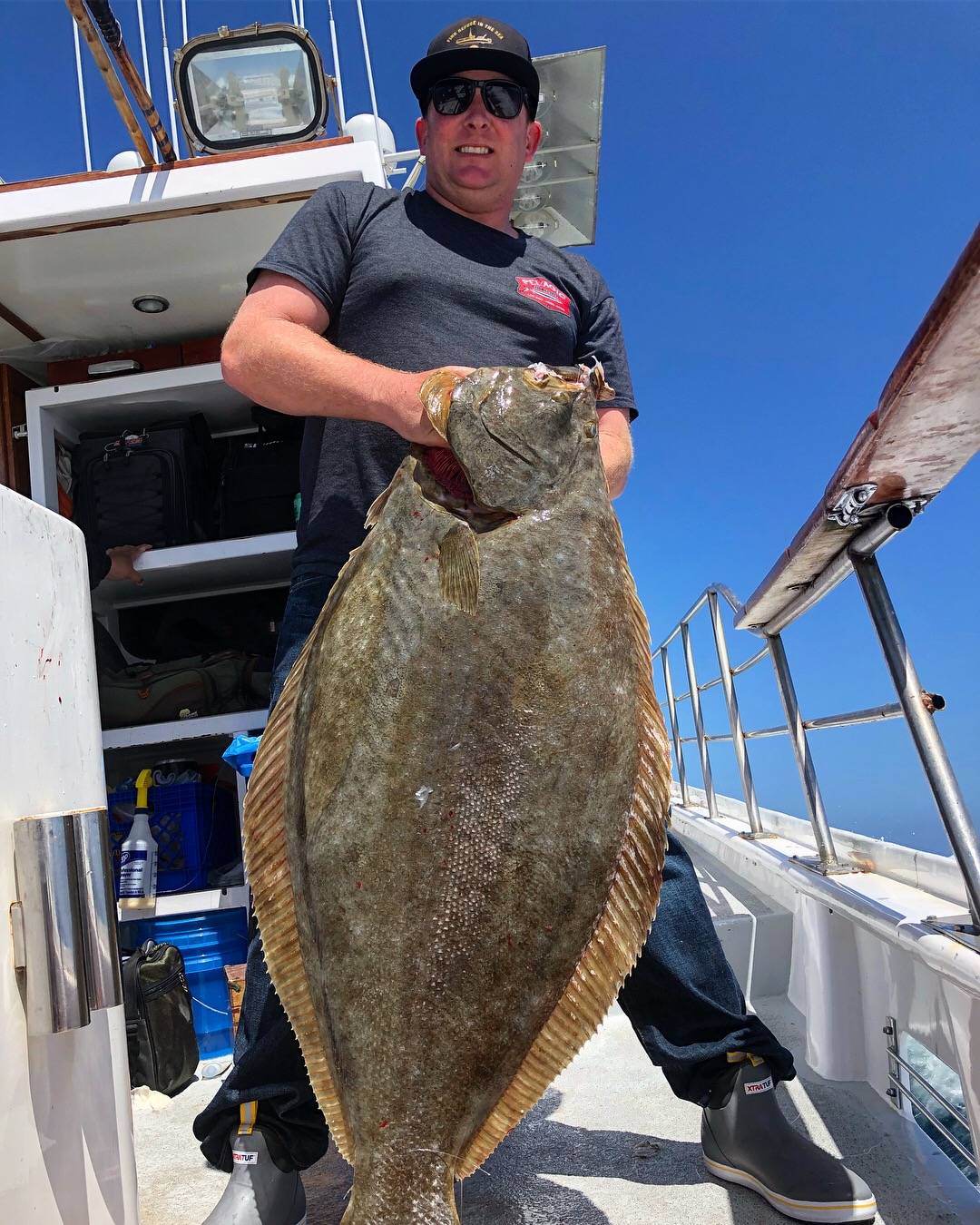 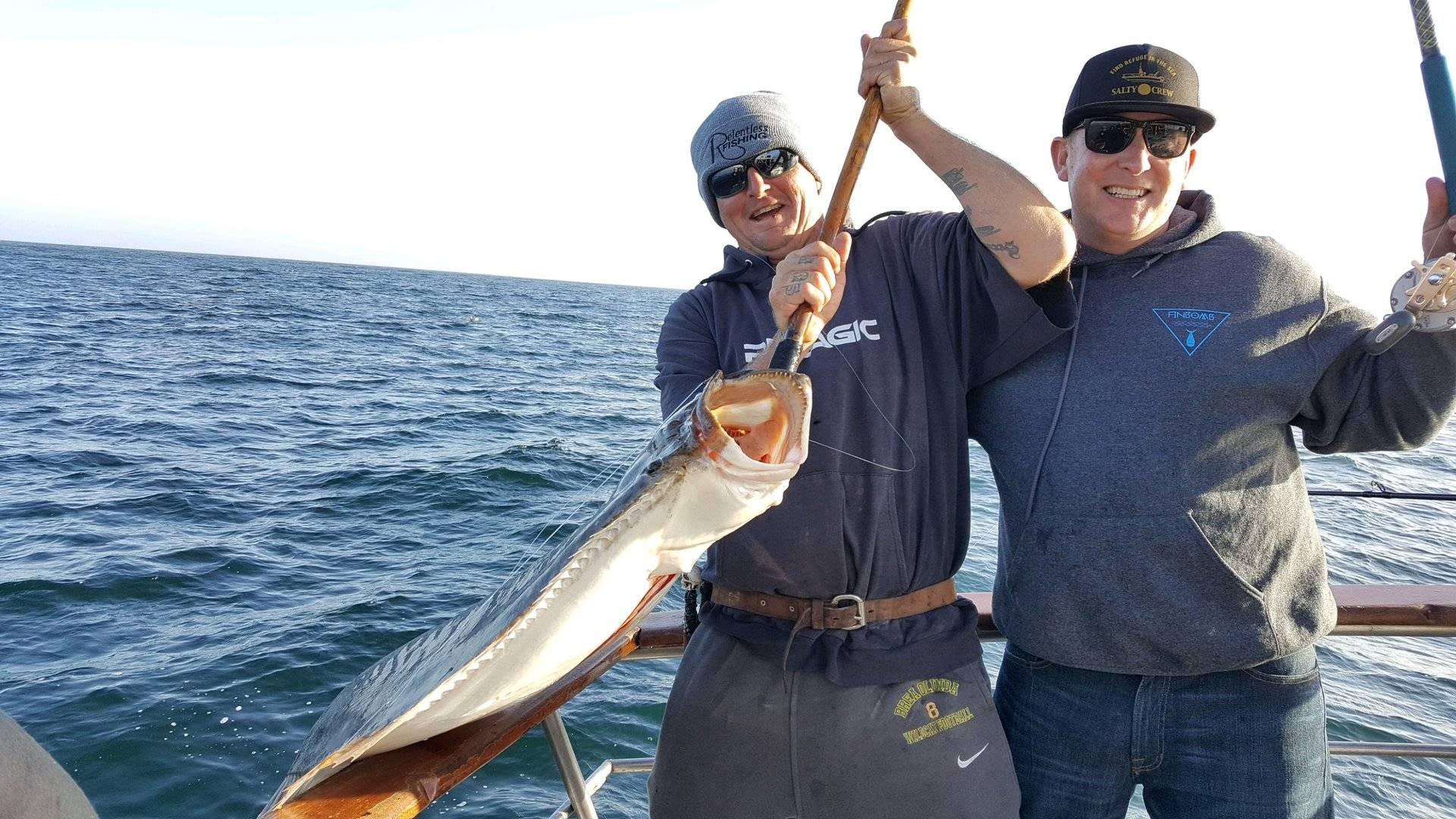 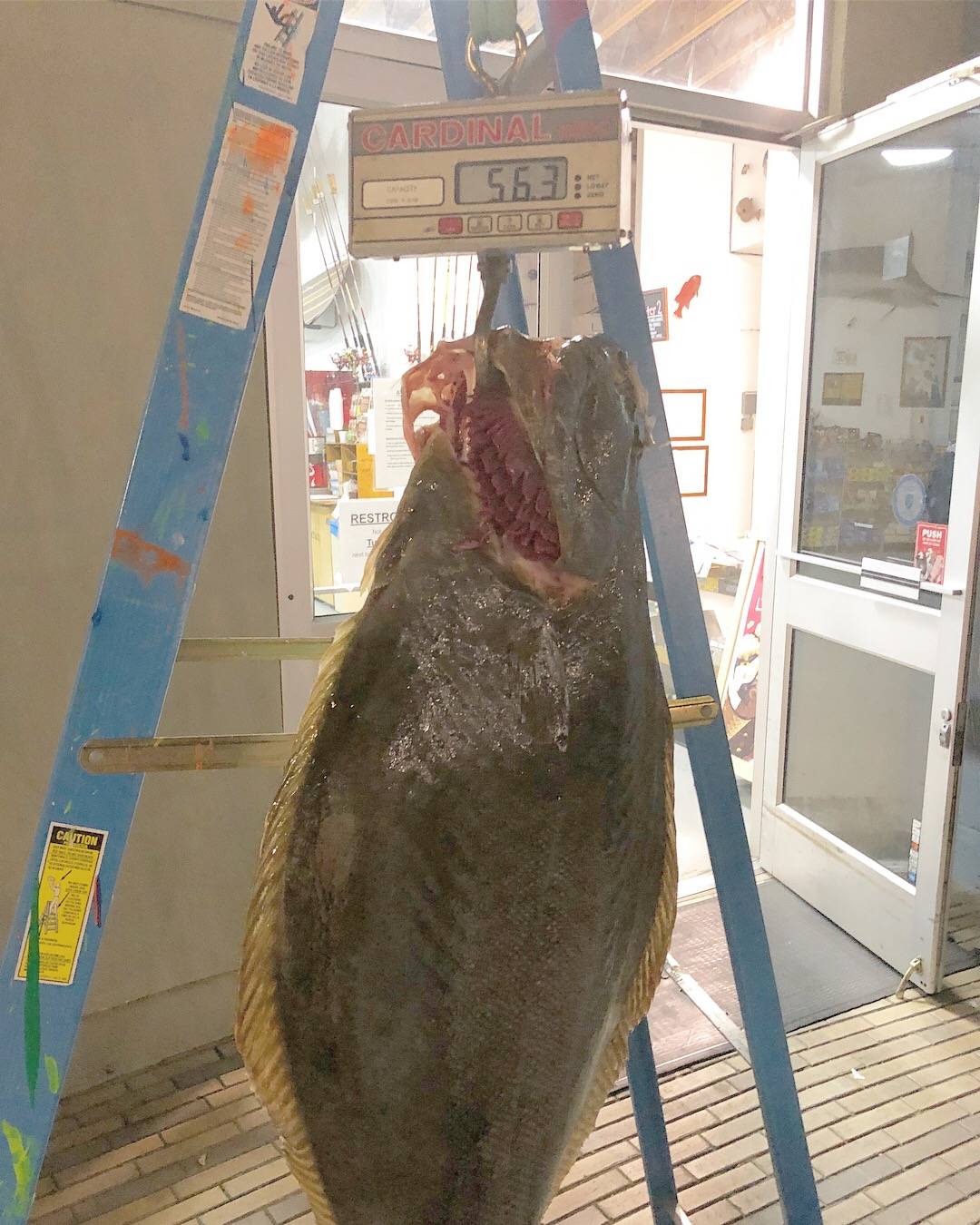 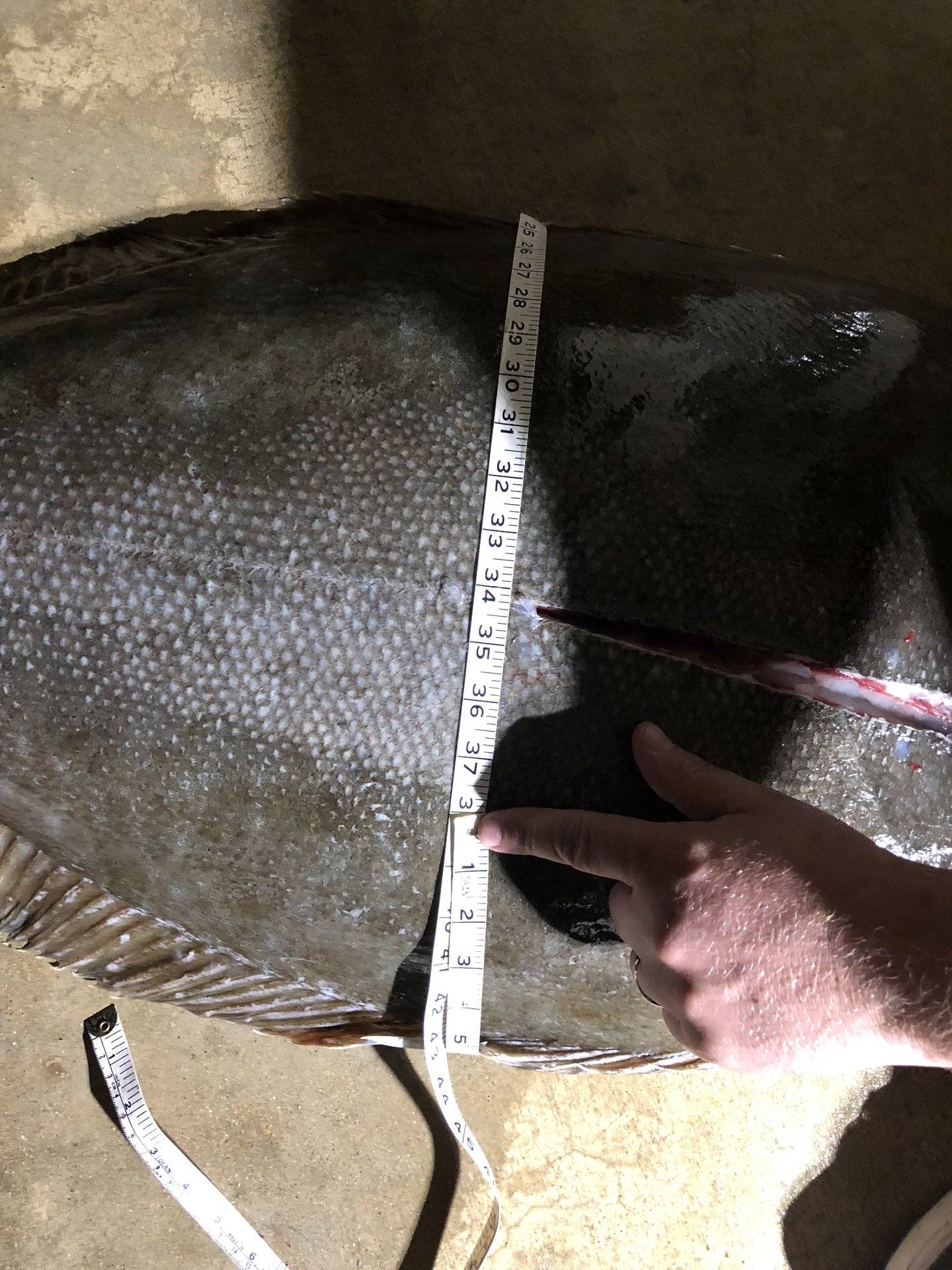 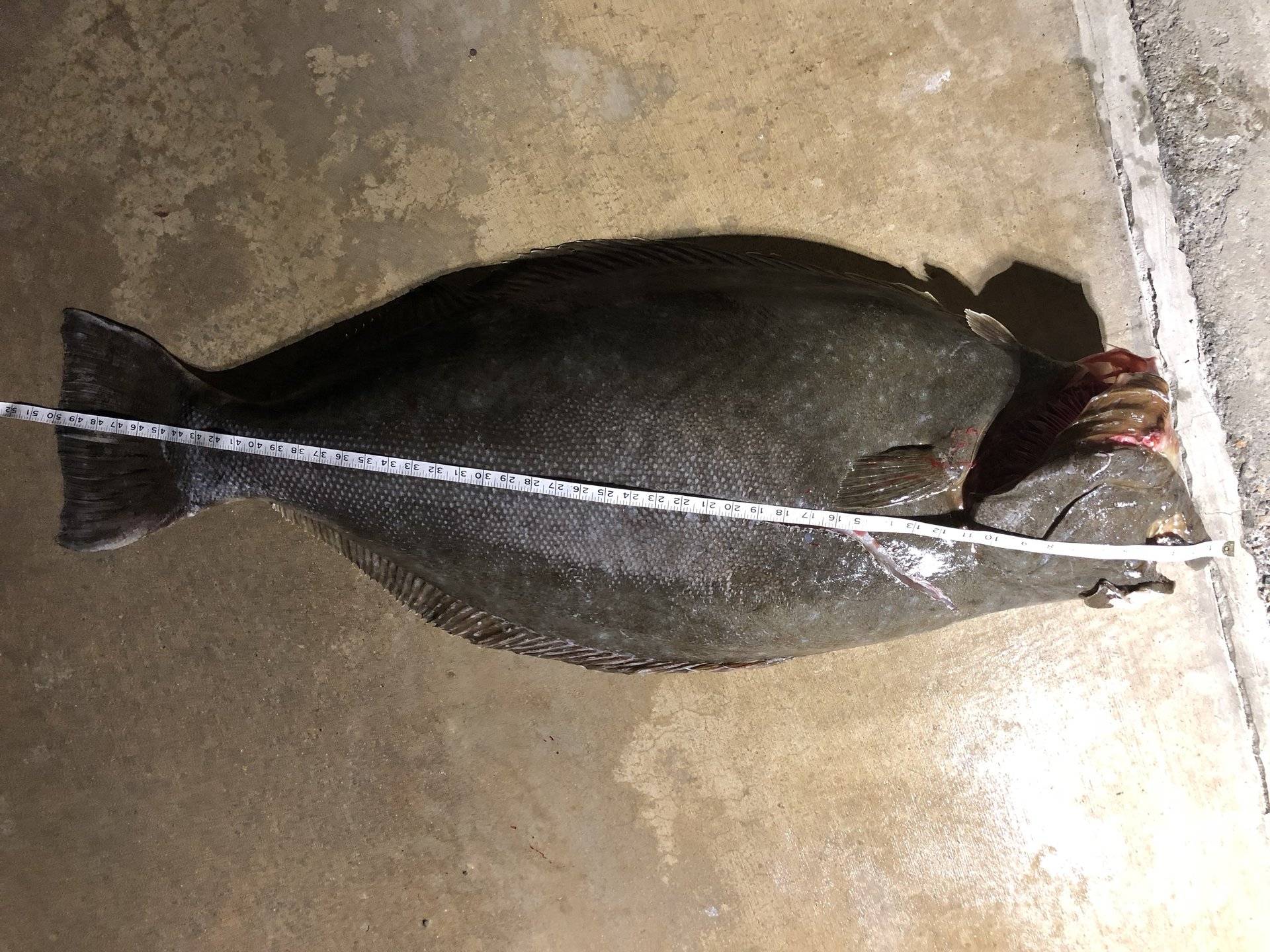 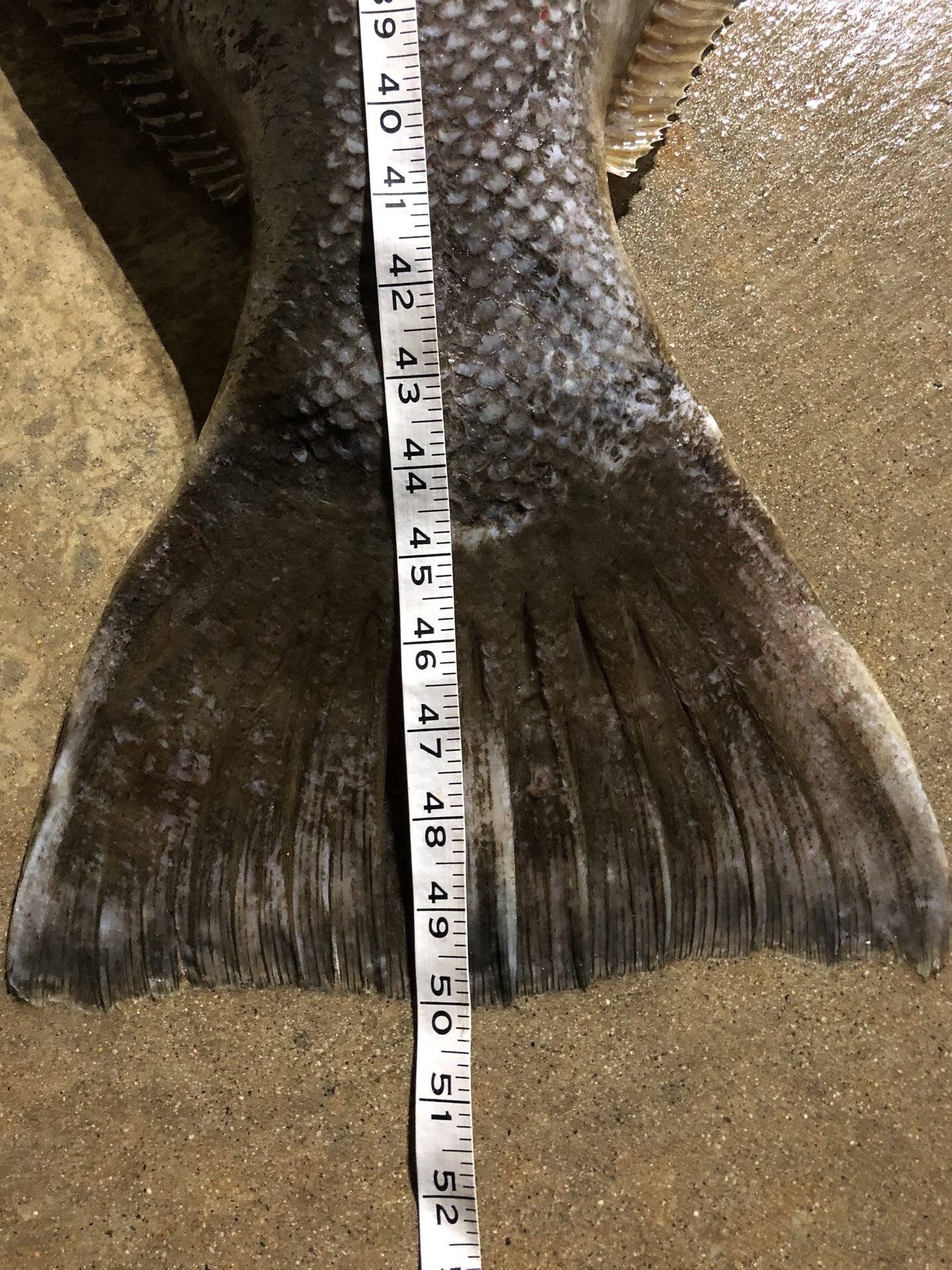 Almost forgot the details... try not to laugh....

Toggle signature
"When beholding the tranquil beauty and brilliancy of the oceans skin, one forgets the tiger heart that pants beneath it; and would not willingly remember that this velvet paw but conceals a remorseless fang." H.M.
Reactions: CartridgeCalls
Upvote 0

Nice, you can relax the rest of the season.
Toggle signature
I CATCH IT. I KILL IT. I CLEAN IT. I DON'T DELIVER IT!
Reactions: CartridgeCalls
Upvote 0

That's a slob way to go on the flattie!!
Reactions: CartridgeCalls and farhangs
Upvote 0

It's a lunker fo sho!

Toggle signature
I have an ambition to go fishin'.
Upvote 0

Oh wow. Your not beating that personal best anytime soon. But hope you do
Upvote 0

Born to get down.

Awesome! I saw the pics on social media.

That’s some accomplishment,you’ve got some good eats for quite a while,nice!
Toggle signature
Cya Tuna Vic
Upvote 0

Back in the day, that would have been front page material. Congrats on a catch of a lifetime.
Toggle signature
Sometimes I wish i was a bird so I could fly over some people, and shit on their head.
Upvote 0

Thanks for sharing
Reactions: IrieMitch
Upvote 0

Nice work! I also got a nice butt on the Ultra in March. Nowhere near your size but took JP. Going out with them boys again Memorial day.
Upvote 0

Beautiful fish, Jeff! Congrats on the PB. Looks like some decent seas to work on, too.
Don't let the record keep you up at night. You won.
Upvote 0

I like big butts and I can not lie!

Friggin' AWESOME, off the hook (or chain if you prefer) and what ever other platitudes I can think of - congrats!

Record or not, that's a beauty! Well done!
Toggle signature
poles are for strippers!

man am i jealous... friggen awesome. great write up too... thanks for sharing.
Upvote 0

Hell of a day, monster Butt and a Tail, fine job!
Toggle signature
Thanks for your report. Hook up! Cory
Upvote 0