Launched out of Shelter island at 05:30 and a couple guys at the ramp were saying the fish were south of the border, but the dope indicated otherwise. Picked up 1.5 scoops and headed out to the 182 to find our own fish. Not 2 hours into our trip, more than half the bait rolled on us. My bait tank is dialed in. Not sure if it was a bad batch of bait or my tank sucked in something preventing water flow.

Went past the North 9 and only saw about 2 boats a distance away. The fleet must have taken the day off because non were in sight. Around 0800 started seeing birds working.

We were 5 miles east of the 182 were we basically remained for the day. Found a nice paddy and it was loaded. Yellowtail boiling around it. Set up on it to drift past it and the stop got better when we saw 2 dodo’s patrolling the paddy. Worked it for over an hour, setting up, chumming, casting, fly-lining, everything. Finally my buddy watches his sardine get inhaled by one of the dodos. Fisssssh onnn .. snap! Drag was buttoned all the way down. (Insert sad face here) lol. Oh well. My buddy will never forget to check his drag.

We move on and continue west towards the 182 and start to see the birds working. Birds were our biggest help today. Still only a handful of boats at a distance and the fish are foaming all around us. We start working the foamers. Run n gun style but slowly drifting towards them when we got close. That allowed us to get 2-3 casts into the foam. We do this same dog n pony show for several foamers and are getting frustrated at throwing everything at them and no takers.

Im hearing boats asking where the tuna went and I say fuck it, and give out our coordinates. 30 minutes later there’s a parking lot and dudes are on the radio with bent rods.

The popper tuna shows itself, and although not a bft, it’s a YFT. We will gladly take it. I gaff that sum bitch and we are on the board! 25-30 pounder. My other buddy hands his rod to the new teenage fishermen on board and he works it for several minutes. His biceps are on fire and feels like he’s going to pass out. Lol. The tuna is working him. After about 10 minutes, we see color and it’s another YFT. It takes its last wind, fight it a bit, and the rod goes limp. Pulled the hook. All good.

We worked this area for the rest of the day running and gunning but no more takers. Called it a day around 2pm and headed back to the barn.

At the end of the day, this was our 5th attempt at the tuna and we had struck out the other 4 times. I got my buddy on his first YFT and his son to fight a Tuna, helped a couple boaters find fish and I smoked a nice Cuban Bolivar cigar. 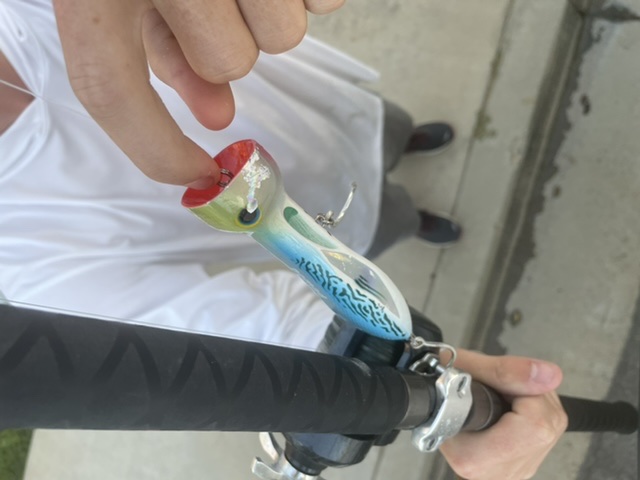 Great job. Real classy sharing the coordinates when you haven't landed one yet. Thanks for the report.
Toggle signature
-AH
I get skunked and I can not lie
Reactions: FishingFiend and Ryan js
Upvote 0

Nice job thanks for the report!
Reactions: Sea Bacon
Upvote 0

Nice job on the fish.
Thanks for sharing the bacon! Sorry about the h8ers! Classy how you handled them!
I was out yesterday and was already in the general vicinity and watched the migration on radar. Sick how many boats showed up.
Had fish all around me most of the day, just not on my boat.
More Good Karma will be yours! Wish more people would play nice!
Tight lines.
Jeff
Reactions: Sea Bacon and Ahkhuang
Upvote 0

Great report and read, info. Cool his son wound one.
HEY 1 tuna MoBetta than NO tuna

I was the guy in the whaler you were chatting with at the ramp about poppers. We went to the islands. It was quiet. Headed north. Got a couple 18lb YT on a paddy then gave you a call. Thanks for the intel. Glad you had a good day.

Boat
Sold - so I make a great ho now

That was a 60 gram green colt sniper... and I was happy to hand off to the youngster and watch him and his pops fight fish at the same time! That's what we do... we get other people addicted to the crack that we call fishing. lol
Toggle signature
Life is tough... it's tougher when you're stupid.
Reactions: djd35de, Isaltyvair1980 and Sea Bacon
Upvote 0

Thanks for the report
Upvote 0
Show hidden low quality content
You must log in or register to reply here.

Offshore Win some louse some