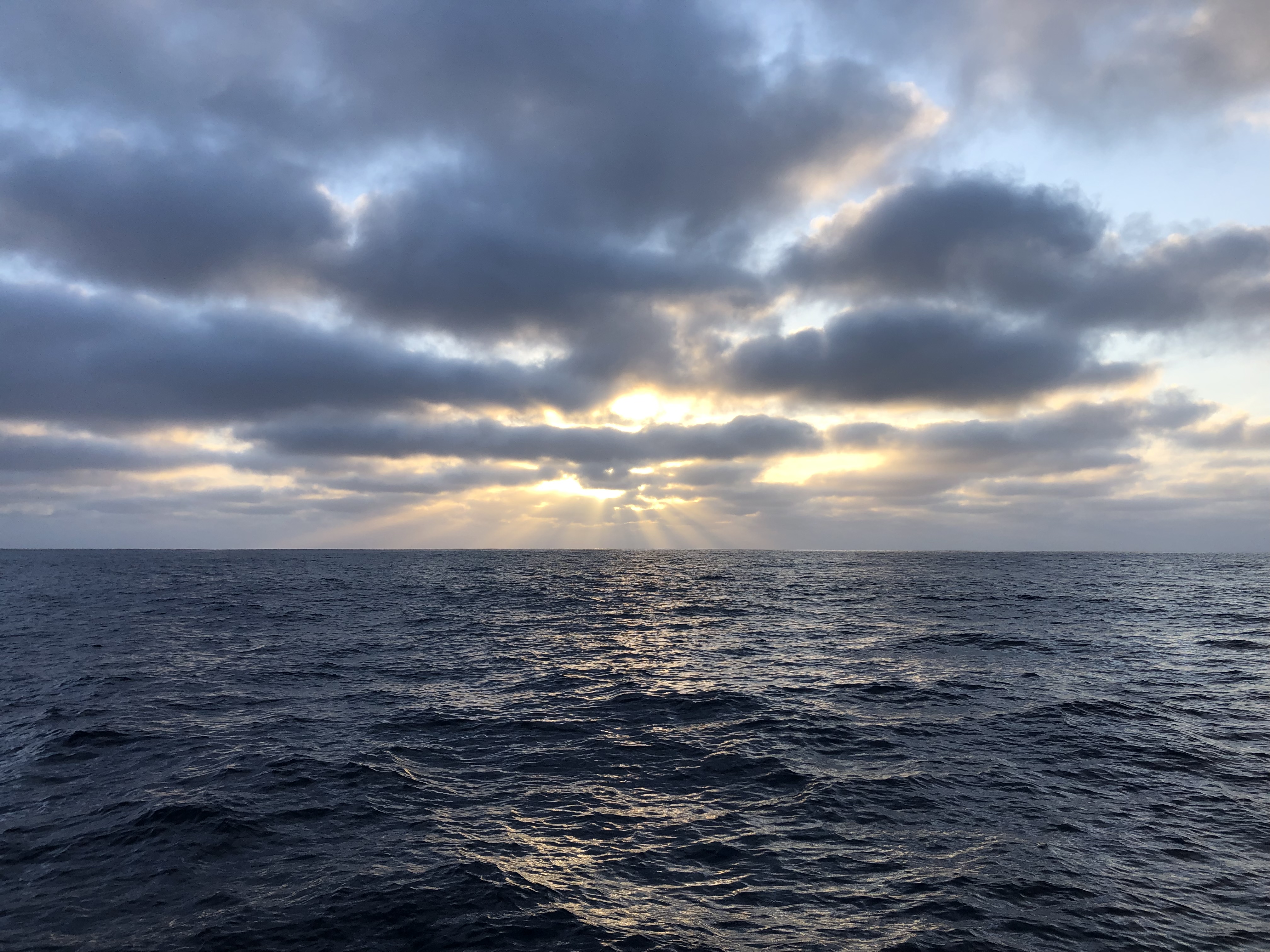 I just returned from the Searcher 7-Day trip to Guadalupe Island. We had a great time catching a good number of quality Yellowfin Tuna and Yellowtail.

I am always apprehensive when going to Guadalupe, knowing how difficult it can be to fish at this beautiful Island. It has a challenging environment, which usually includes good-sized fish and a lot of ways to lose them (pulled hooks, Great White Sharks, tangles, structure, etc.). In addition, a lot of people say that the fish at the Island fight harder than similar fish in other environments. I don’t know if this is true, but it sure seemed to be.

After loading the boat, getting bait and completing the check-in in Ensenada six hours later, we headed to the Island and arrived on the second day at 1:30 p.m. The first three and a half days of fishing were spent at the northeastern portion of the Island and Captain Mike put us on the Tuna. It was usually a pick bite, with one or two hooked at a time. The Yellowfin were mostly 50-80 pounds and occasionally a Yellowtail would swim through with the Tuna. My first day’s catch included a 50 pound Yellowfin, 36 pound Yellowtail and a Shark bit Yellowtail that weighed 31 pounds without the bottom third.

We were using 60 and 80 pound line with 2/0 or 3/0 circle hooks. My favorite is a ringed Owner Mutu and my go to rod/reel combination is a Graftech GOF78XH rod and Penn Fathom 40 reel with 65# spectra and a short 60# fluorocarbon leader. 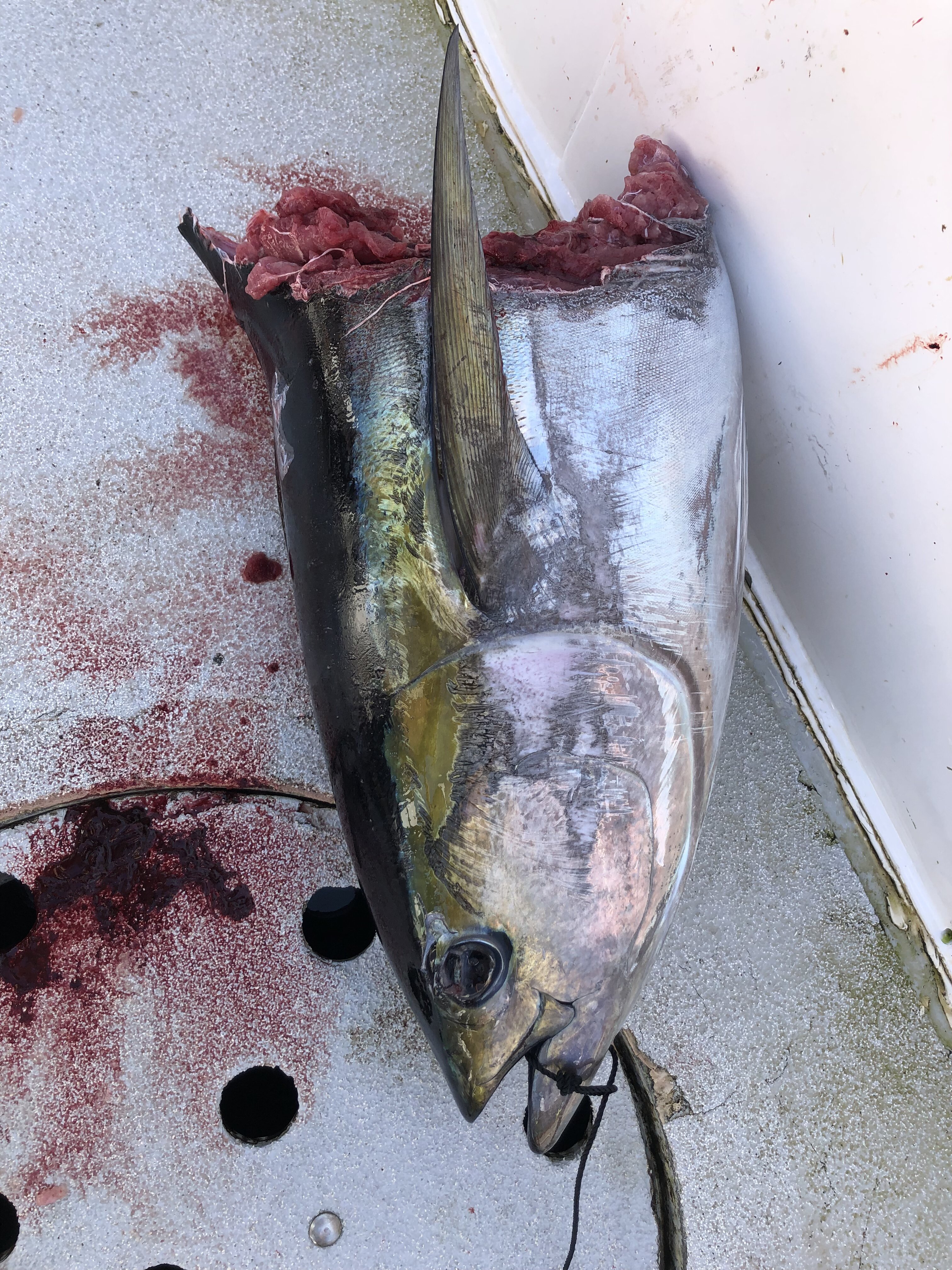 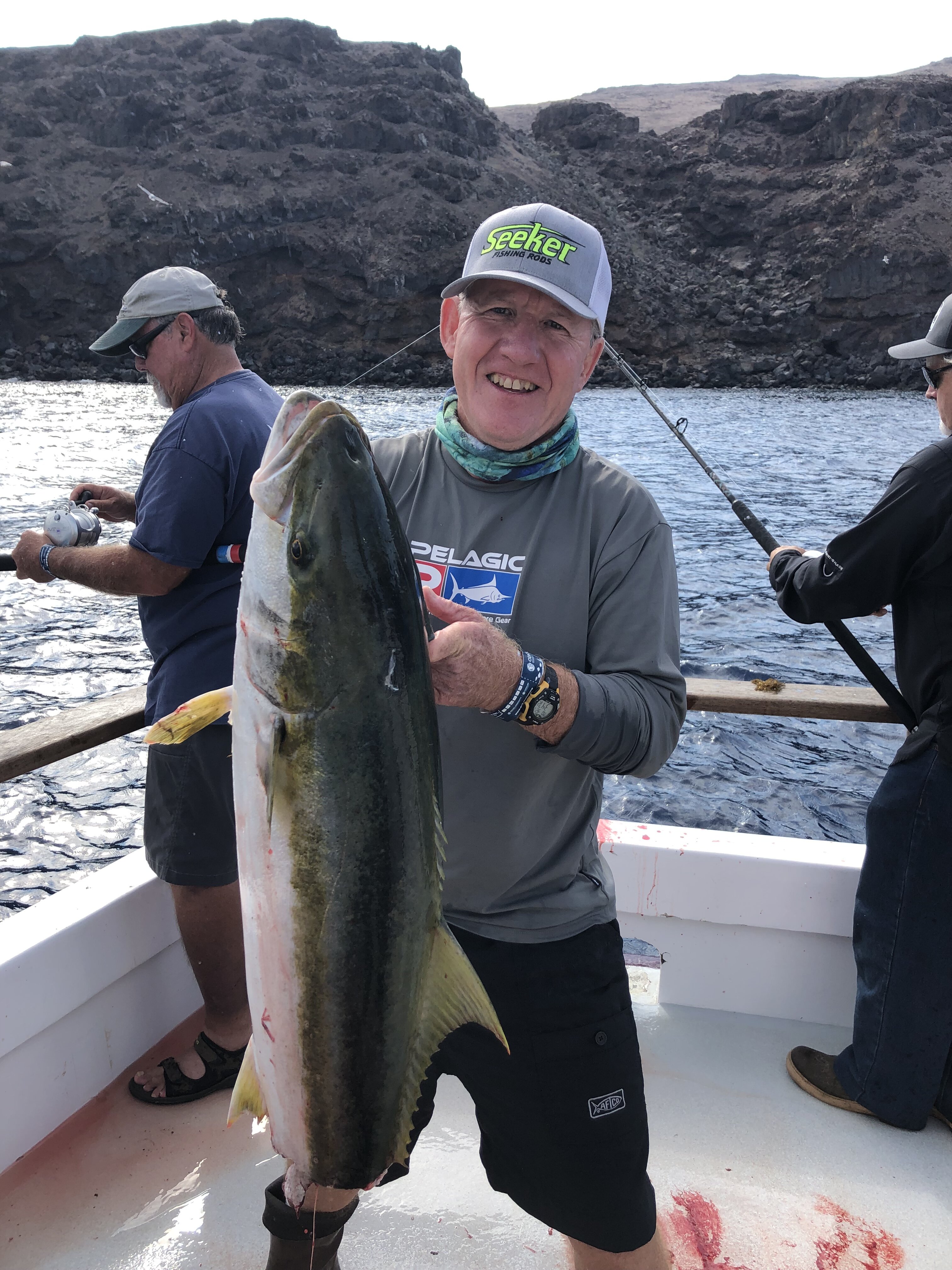 As far as paying the proverbial Tax Man, we often had Great White Sharks under the boat and at one point we had four of them, which made landing fish nearly impossible. This also resulted in a lot of pulled hooks as anglers tried desperately to get their fish in quickly past the Sharks. I would add that there are few feelings like fighting a large Tuna for 40 minutes, only to see it devoured by a 15 foot Great White just below the surface.

The fishing on the second day was similar to the first and I landed two fish, a 30 pound Yellowfin and a 91 pounder. The larger Tuna was second in the jackpot, with first being 94 pounds and third 87 pounds. We also experienced some amazing things, like a Great White missing a gaffed Tuna and ramming the side of the boat. We saw one leap completely out of the water two times while chasing a Sea Lion. I didn’t know a 2,000 pound fish could do this! 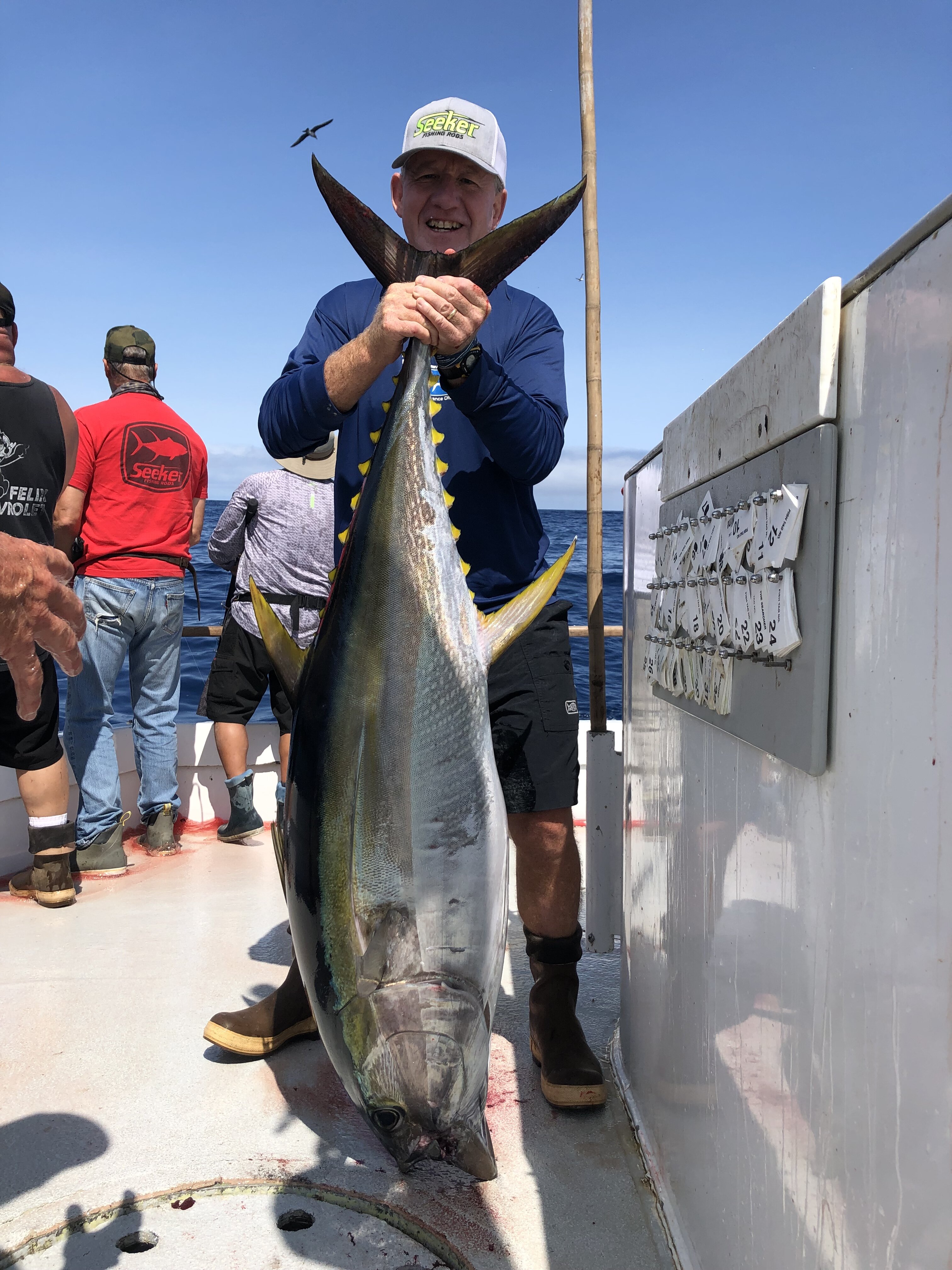 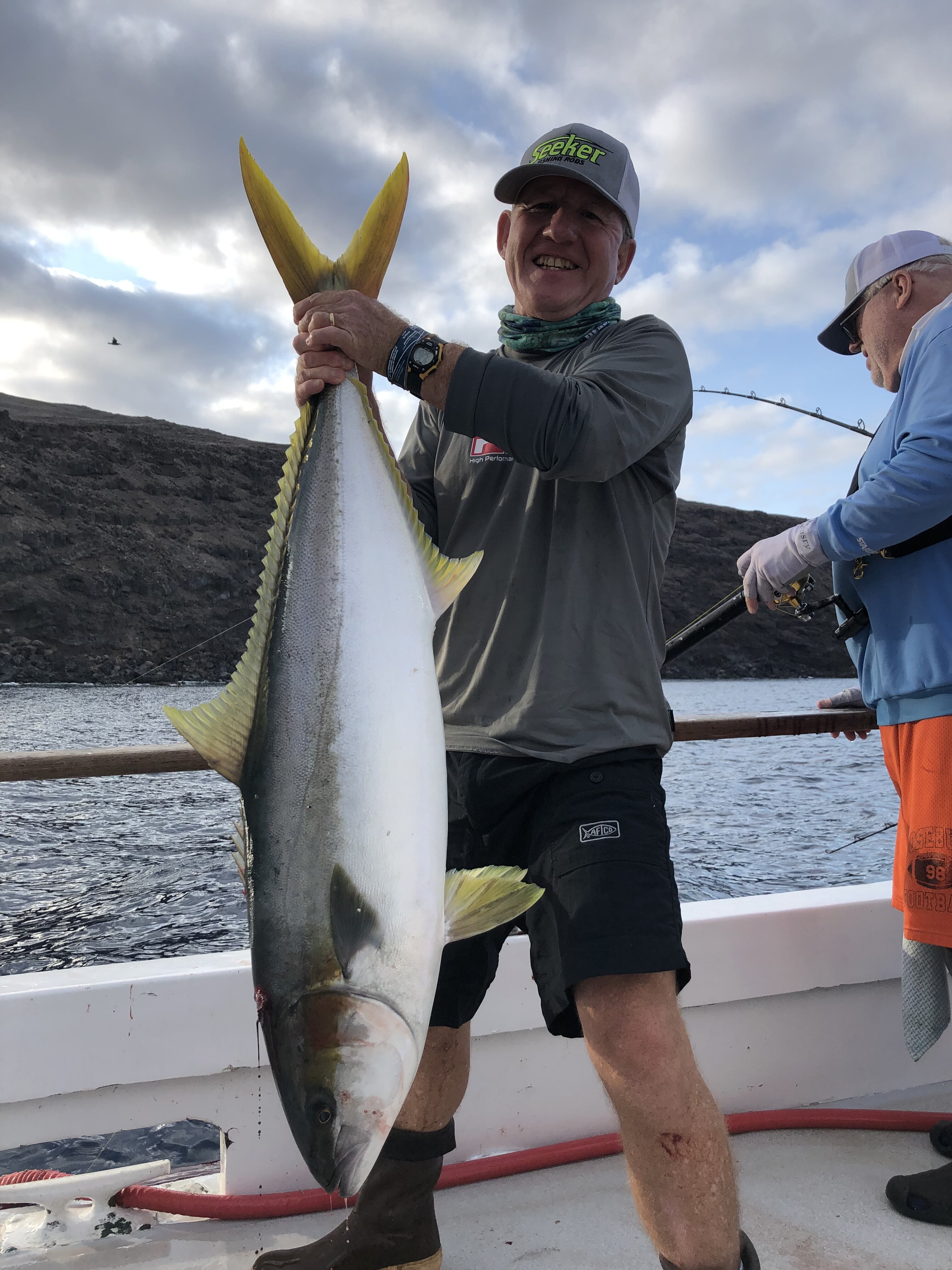 Days 3 and 4 were a little less productive and although I hooked fish, I didn’t managed to land any. Our final day was spent on the outside of the Island, trying various spots from north to south while looking for Yellowtail. Some Tuna were also caught swimming through the chum line and I landed two, a 30 and a 50 pounder. The final spot at the south end of the Island provided good fishing for quality Yellowtail, with fish mostly above 25 pounds. The two biggest were 48 and 50 pounds. A majority were caught on dropper loops and yo-yo jigs, and a few came on flylined Mackerel. The most popular jig color was mint and I caught one of my three Yellowtail with a Tady 4/0 in blue/white. The others were caught flylining. The day ended nicely with good fishing and a beautiful sunset, followed by a delicious panko encrusted Yellowtail dinner. After this we headed to Ensenada and then back to the landing, a 21 hour trip.

Overall I was pleased with my 10 fish, knowing that Guadalupe is more about quality than quantity or variety. My 91 pound Yellowfin Tuna was a personal best and I have much appreciation for Captain Ryan coaching me through a number of complications during a long fight (going over/under the anchor cord numerous times, tangles, fish swimming under the boat, etc.).

Of course no fish report would be complete without a shout out to the owners and crew of the Searcher. Owners Celia Condit and Art Taylor run an outstanding operation, which I have enjoyed annually for 19 years. Erin in the office is nice and very helpful. Captain Mike is talented, determined, friendly and successful in consistently finding fish. The crew on deck, Captains Armando, Ryan, Sean and Deckhand Shane, provide a fun atmosphere and I owe them a BIG thanks for all of the great advice and guidance on hooking and landing fish. Finally, Chefs Dan and Mike provide great meals, snacks and appetizers and their seared Ahi dinner was fantastic! I’ve signed up for the same trip next year and look forward to another great time onboard the Searcher.
Reactions: vegasandre, SlideRight, jiggyn and 37 others
Upvote 2

Great report/info/pics and NICE FISH
At least you got the 2/3'rds Meat left of that one tail chomped off Yellowtail. The tax man has always been a contest there over years.
Reactions: jiggermyster
Upvote 0

No pics of the food? don't tell me I gotta call BS on this trip report too.
Toggle signature
Voted asshole #2
Upvote 0
L

Thank you for the report and congratulations on your PB YFT!

How was the night bite? Any action?
Toggle signature

I gotta call B.S with no pics of the 2000lb Great White going airborne after the seal, Just kidding,

lastcast619 said:
Thank you for the report and congratulations on your PB YFT!

How was the night bite? Any action?
Click to expand...

Good question. The days were pretty long, so there wasn’t much effort at night. We tried a little with no luck. However, the daytime action usually started shortly after dawn. I hooked one on my first cast, which Captain Mike described as “probably a hundred pounder”, fought it for an hour and then lost it!

kevina said:
I gotta call B.S with no pics of the 2000lb Great White going airborne after the seal, Just kidding,

I would also like such a picture, but it happened quickly and none of the dozen or so people watching had a camera ready. We were fishing!
Reactions: lastcast619
Upvote 0
T

Great report !!! My son and I were chillin at dusk on the Rooster and we saw a GW shoot straight out of the water completely vertical, amazing.
Upvote 0

Has anyone else seen the big Mako at the Lupe with the bite mark scar on its side? It’s a BIG shark to and isn’t shy about taking your tuna
Upvote 0

Thank you for the report and congrats are in order on your great fishing adventure. I just love fishing the Lupe. I have seen many great whites get air like a rocket being launched from under the water. It's an amazing sight.
Upvote 0

Thanks for the report. This is getting me excited for my trip to the Island in 4 weeks. This is going to be my second trip there this year and I need a tax refund from the great whites!
Reactions: Soda Pop
Upvote 0

Stellar report and wtg on a personal best and one of the big fish for the trip. The bite and challenge of the bite is the best part, so at least the landlord can't take that away.

Great to see the big yellowtail. Worth going just for the yellowtail fishing right now.

I had one almost land on me (one of the top biggest thrills of my life). If I had a go pro on my head recording. Would had got the shot. Mouth wide open in roar mode and made eye contact in the air. Full air half boat length and got splashed with water. Like shamoo. The shuffle was going starboard corner to port. I started 4 feet up starboard corner fishing the (spot) casting overhand (short soak 1 minute bait or less) and was the only person on the starboard side when it happened
Last edited: Oct 6, 2021
Upvote 0

I was on the Royal Polaris anchored next to you guys for a few days. Tough scratchy bite. Only had 1 shark sighting, but we had 6 seals causing havoc for us for most of the time there. You guys did better than we did. I had 1 bite and 1 70# YFT for 4 days of fishing.
Upvote 0
T

mmsblee said:
Thanks for the report. This is getting me excited for my trip to the Island in 4 weeks. This is going to be my second trip there this year and I need a tax refund from the great whites!
Click to expand...

If you're leaving in a month, you probably won't have shark issues. I've been on a November trip every year since Guadalupe opened up after being closed to long range boats for many years. Once the elephant seals have gave birth to the youngins, and mama has nursed them, the great whites leave. It's usually around the first of November. November and December can be excellent fishing at Guadalupe. At least that's been my experience.
Upvote 0
Show hidden low quality content
You must log in or register to reply here.

On the water report. 10 day independence.