After an engine rebuild in February, two local break-in runs and a camping trip to Lake Nacimiento in early May, my son Sean and I were finally able to take the Mako My Day over to Catalina for a few days. After we launched Monday morning, Nacho was completely out of bait, and San Pedro only had anchovies. We were about three miles out when we spotted the Provider, who was loaded with squid.

After loading up on the squish, we crossed in moderate conditions. At the island, the wind was blowing out of the south east and it was cold. We hit a few front side beaches and Sean released a nice barracuda. 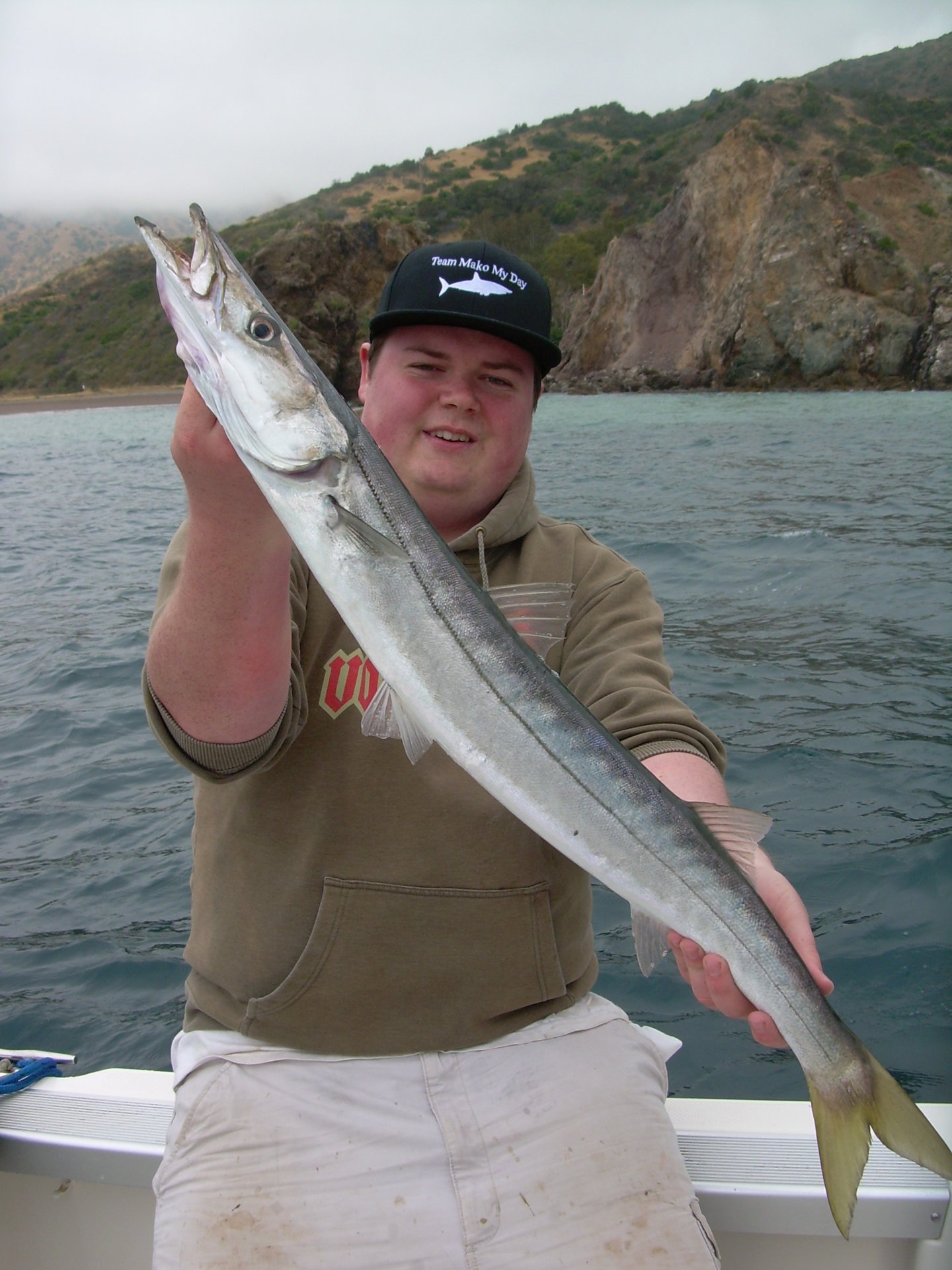 Outside we trolled mackies for nothing. Moving to the back side east, we released six short halibut and lots of calicos. I got a 14-inch calico that I was forced to keep as it was bleeding out, and Sean matched it with a 18.5 inch sand bass. 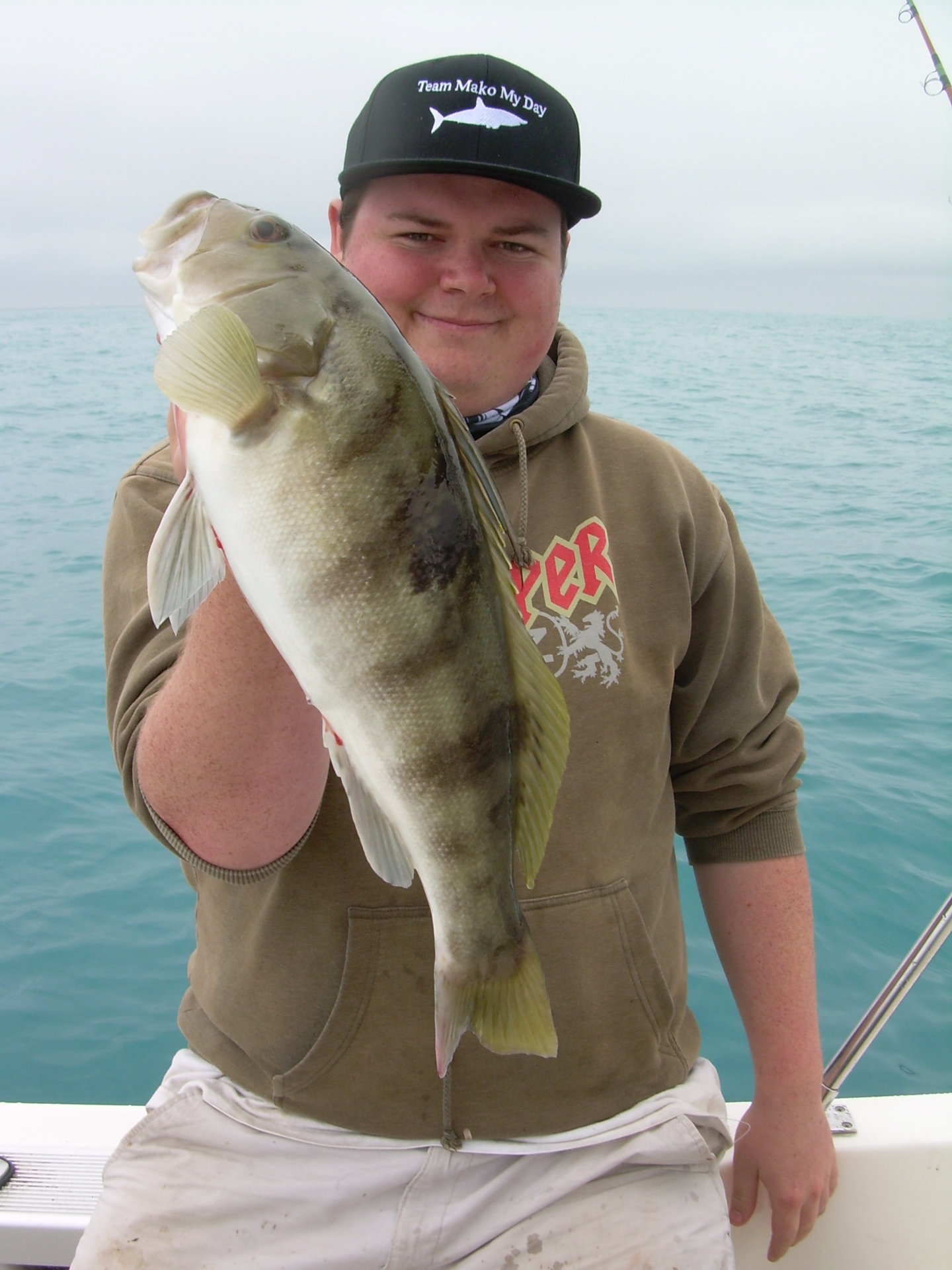 Moving west we found the squid fleet at Ben Weston, but it was a little too rough for us so we anchored up at Cat Harbor for the night. I managed to release a black sea bass estimated at 60 pounds on the 20-pound string, but that was it for the day.

Tuesday morning we topped off the tank with more squish from the Long Beach Carnage and set up on the grounds. All we got for our efforts were more released calicos. Mid-day we went over to the Isthmus to try for rockfish, and Sean got a big red along with a smaller one and a 5 pound sheepheed. I seemed to be a miniature whitefish magnet. 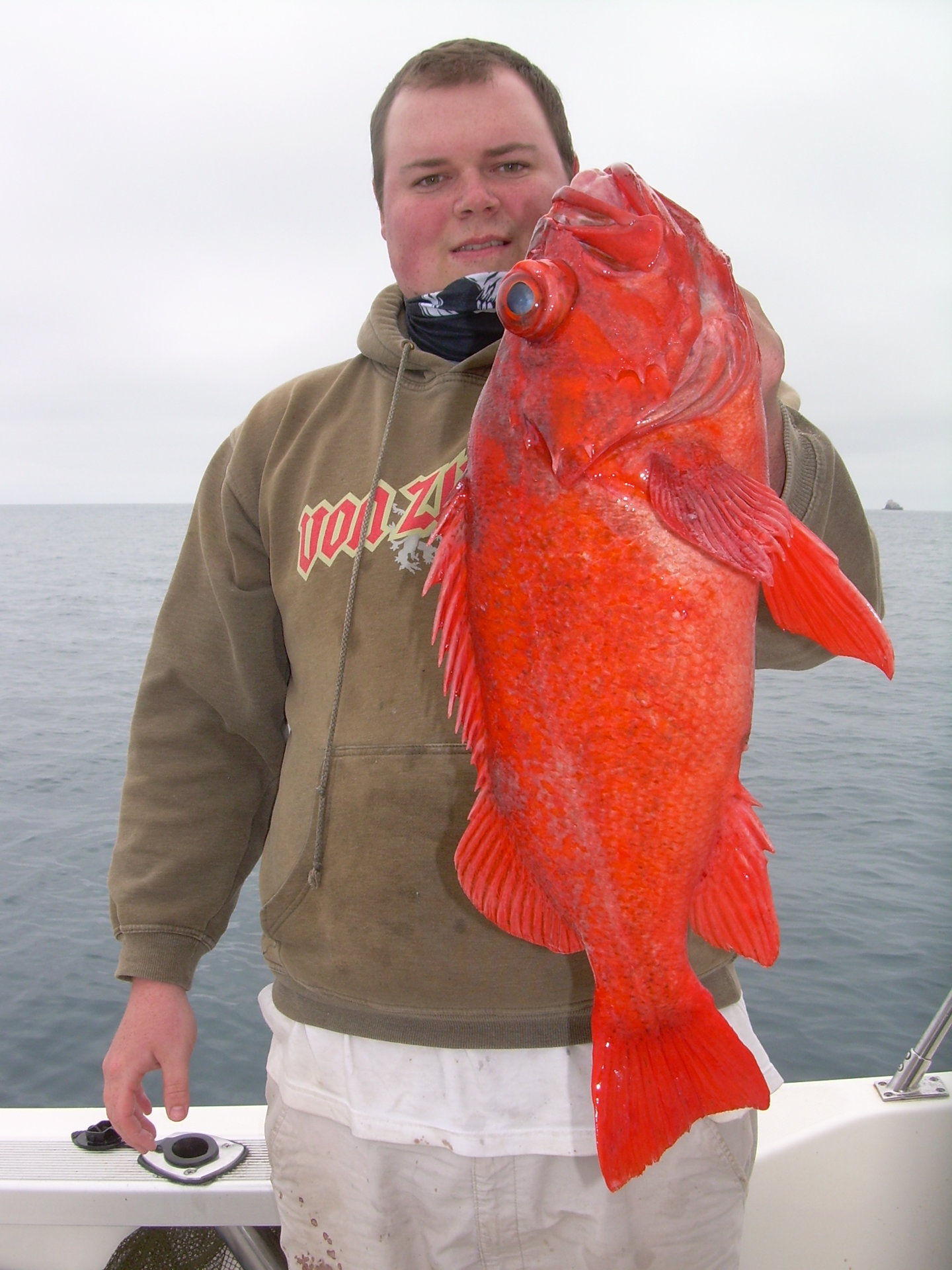 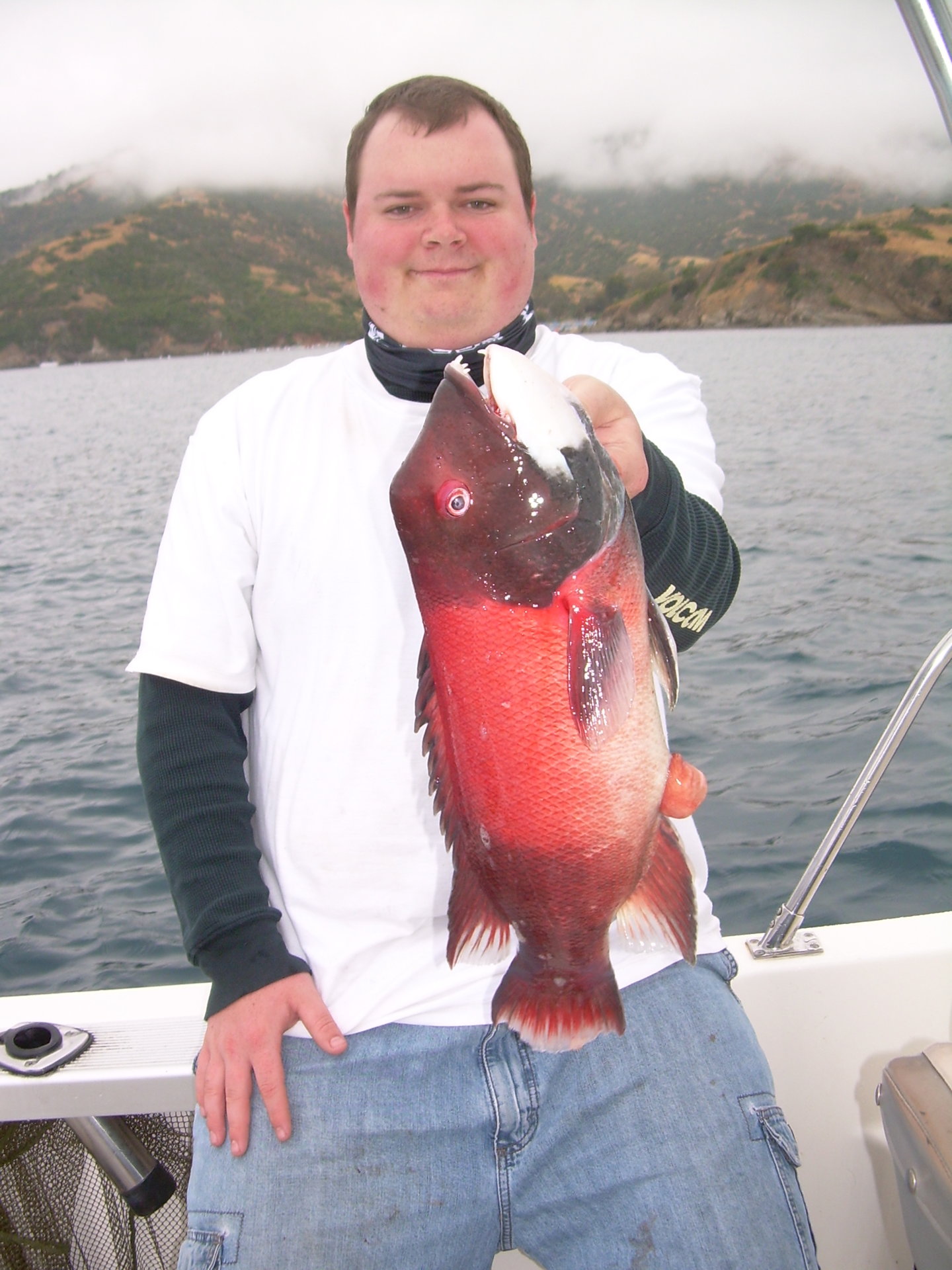 Sean then hooks into something large on the light gear in 180 feet of water. I was thinking it was another black sea bass, but when it did not float after working it half way up, we were hopeful. After a 15-minute fight on 20-pound gear, I sink the gaff into Sean’s 26-pound yellowtail! Alright! Now things are looking up. That fish had a stomach full of small rockfish when we cleaned her. We moored up at the Isthmus for the night, feeling good. 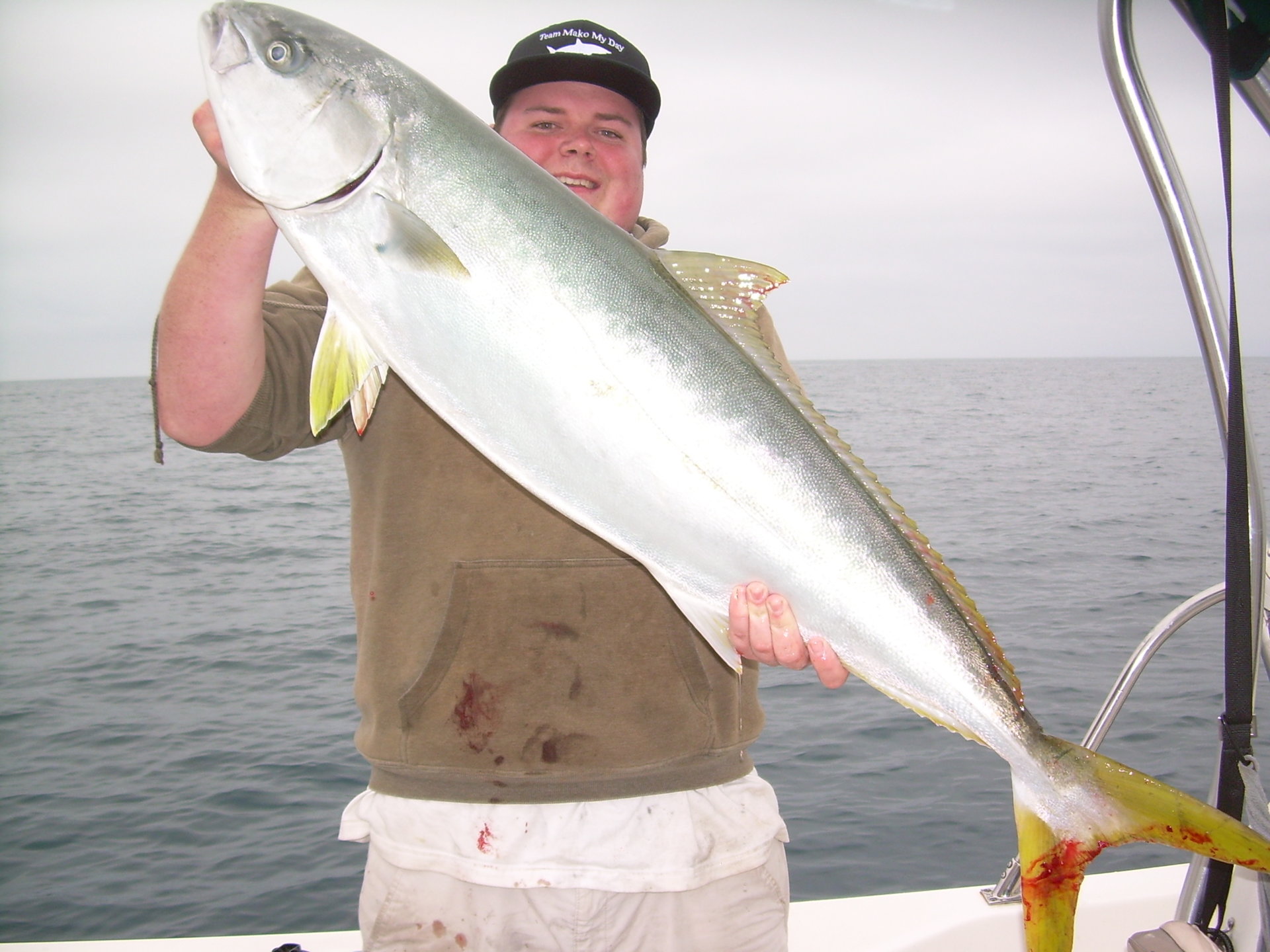 Hitting up some west end beaches Wednesday morning, Sean got a just legal halibut that was released, as well as a short. I released a couple of nice sheephead. 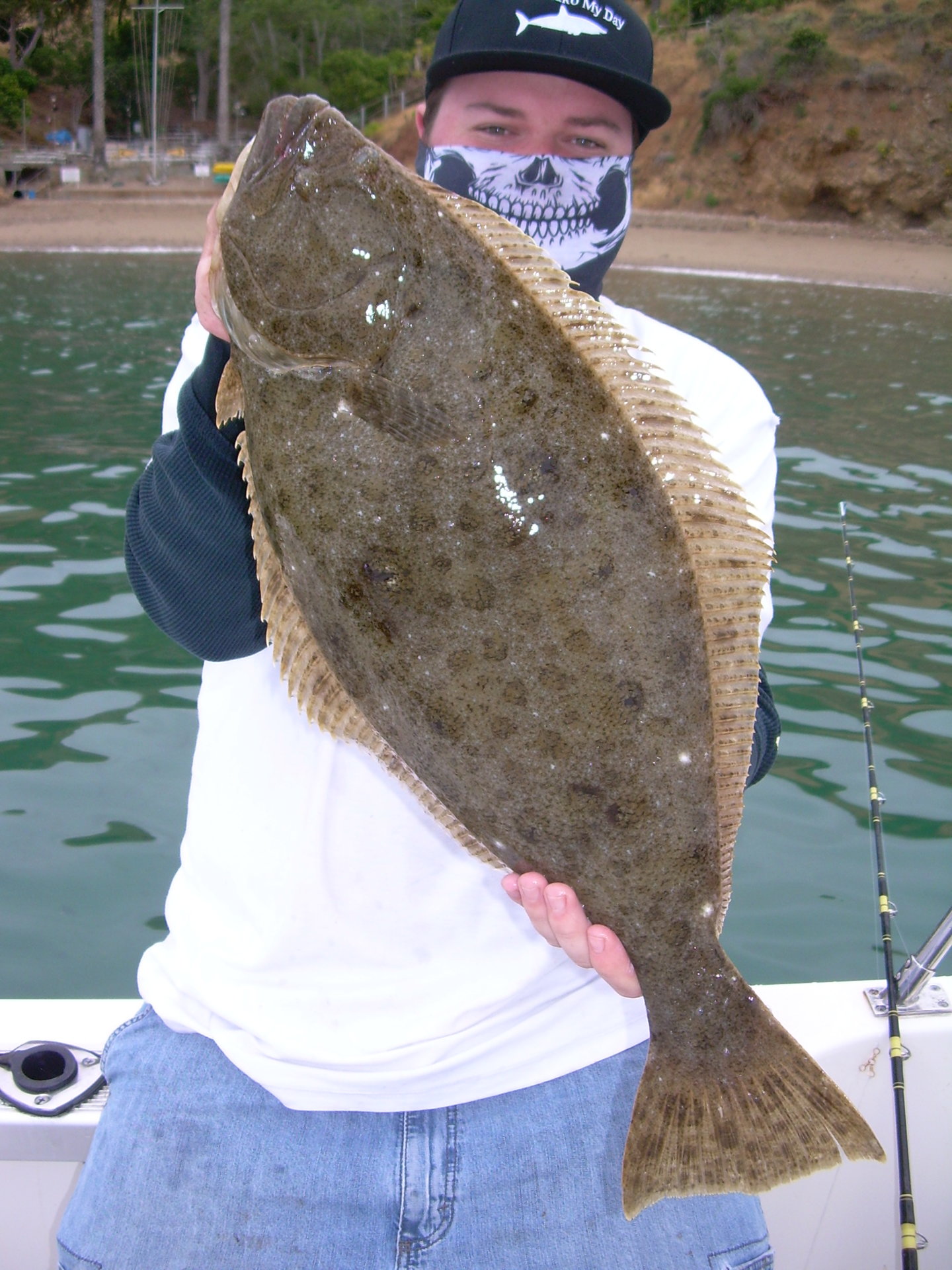 Figuring we had plenty of fish on board, we headed down to Avalon for some relaxation and some lunch from Rosies on the pier. That afternoon we trolled mackerel between Frog Rock and Long Point in 64.3 water. I got hit a couple of times, but nothing stuck. The sun finally came out for a few hours to warm us up.

Thursday morning, we decided to give it one last go on the squid grounds before going home. I set up a drift where there were no boats, and as soon as we got to 90 feet I get hit and it turns into a 12-pound halibut. Finally, dad is on the board! 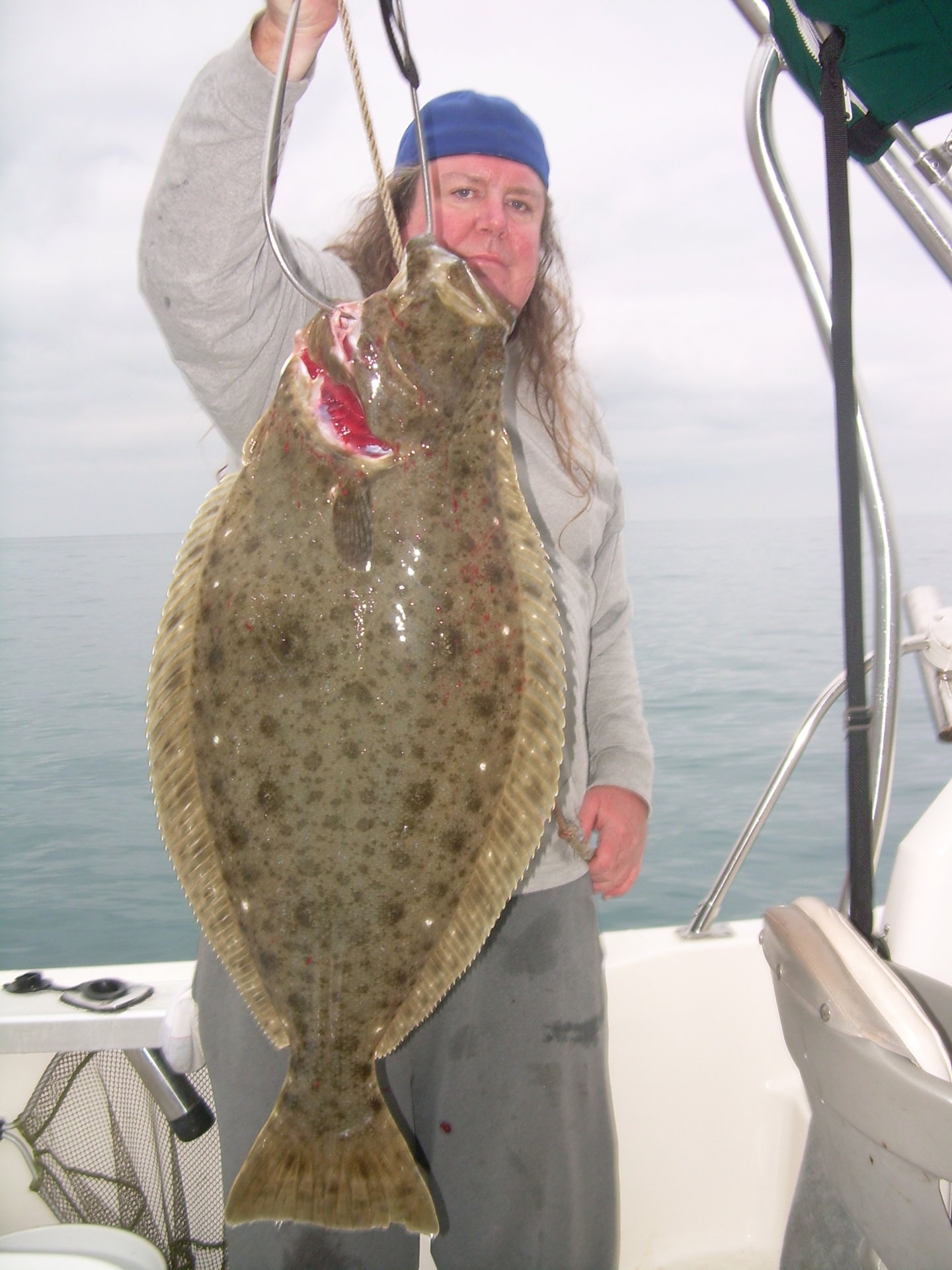 While I am still bleeding out the flattie, Sean gets absolutely freight trained. After chasing the fish around for about 10 minutes, Sean’s personal best and boat record 35-pound yellowtail hits the deck. Wow! On 25-pound test line. Quite a feat. The big yellow wouldn’t even fit in the fish hold, but as it was full anyway, we just piled ice bags over it and left it on the deck for the ride home. The smile on Sean's face says it all. 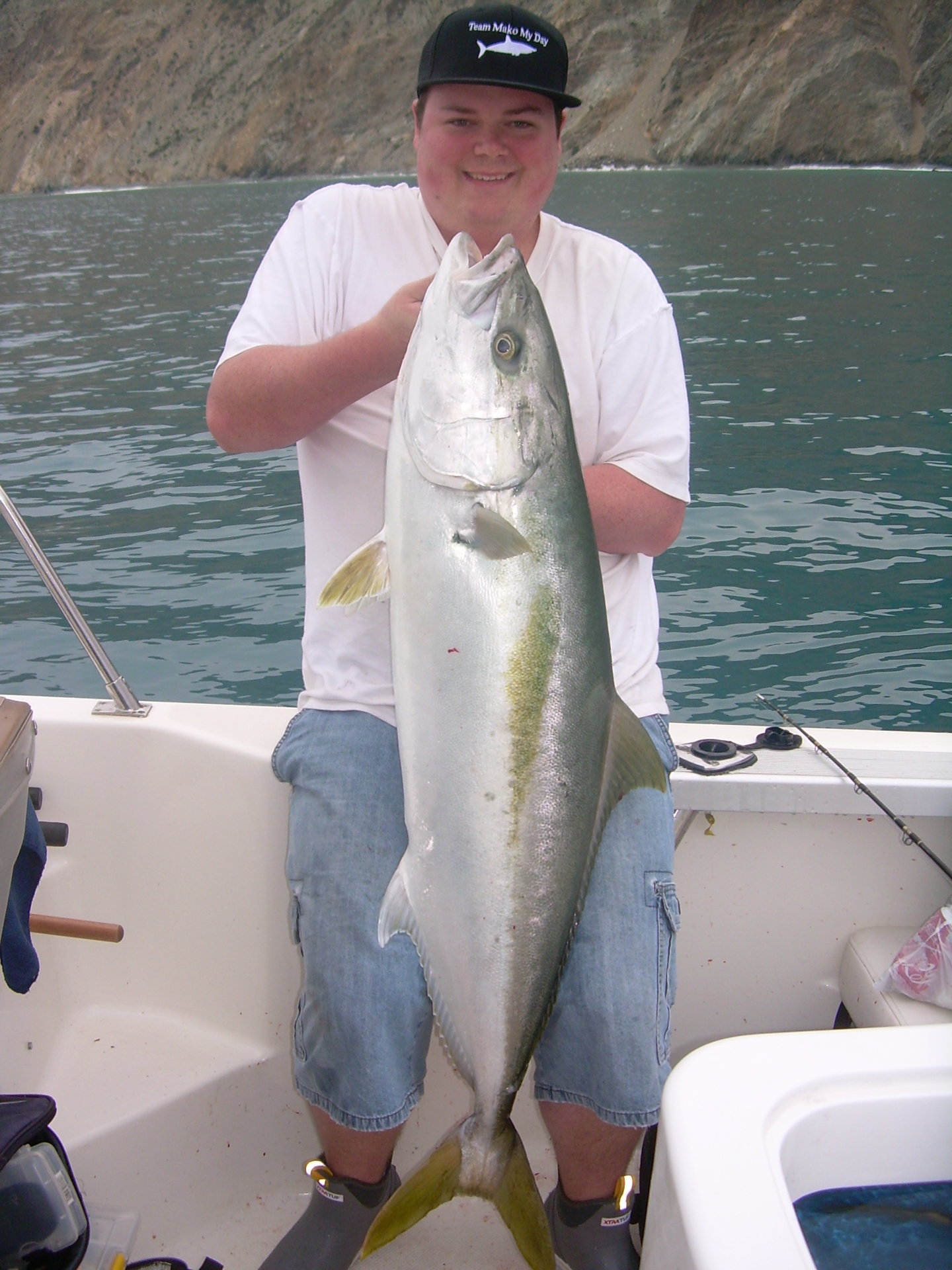 Time to fire up the BBQ, smoker and the deep fryer!

very cool report and stoked for you guys!! that slug yellow on 25# is quite a feat!! way to go guys!!
Reactions: mhanson59hb

You to are Amazing!
Expand signature
JOHN PAWLAK
Reactions: mhanson59hb

Congrats!! Every time I see one of these I sure miss fishing with my Dad.
Reactions: SaltH20Angler, mhanson59hb and Uncle Rick

Nice! Well someone taught that young man well! Great job guys! I have never these islands, do you sleep on the boat?
Expand signature
c-nut aka Glenn
Reactions: mhanson59hb
P

Great way to start my day!

Thanks for the great report and very nice pictures.

I give my sincerest thanks to all the cops that protect us from criminals
Reactions: mhanson59hb
S

Super rad. What a trip, your son will cherish that forever.
Reactions: mhanson59hb

Now that's a fishing trip!!! A good one too!

Thanks for sharing.
Reactions: mhanson59hb

c-nut said:
Nice! Well someone taught that young man well! Great job guys! I have never these islands, do you sleep on the boat?
Click to expand...

Thanks! Yes, we sleep on the boat. It has a small V-berth, and it is a little tight for two, um, "large" people! Get out there if you can, you'll have a great time.
Expand signature
Go ahead, make my day...