My friend Bill is out here from Wyoming and he really wanted to go shark fishing. Due to low water temps off shore, our expectations were low. Joining us on the trip were Devan and my son Sean. We launched from Huntington Harbor Tuesday morning, and Mario only had small anchovies left, as he sold the last scoop of sardines right before we got there. It figures.

Fortunately, we were able to make about twenty 8 to 12-inch greenbacks, a few big sardines and around 10 Spanish mackerel outside the break wall. The plan was to head down to the HB flats, check the pipe and Newport reefs and then troll the curve out to the oil rigs. That part never happened.

I motored us over to a spot outside of Sunset Beach that has produced trip saving flatties in the past, and we dropped in some of the Spanish in about 65 feet of water. Not more than 10 minutes go by and Devan’s setup gets a slight bend in the tip. He lifts the rod and does not feel anything, so he feeds out a bit of line. I ask him to lift the tip again to see if there is any resistance, and this time there is.

He sets the hook and the rod loads up, but there is no head shake, run or even tapping. Just dead weight. Dev thinks he has some kelp, rock or a “bag” hooked as he put it. A steady, smooth pump and wind gets whatever it is closer, but there is still no indication that it’s a fish. Sean is the first to see color, and he yells “it’s a huge halibut!”

Indeed, it is, and she is coming up vertically (not good) and is barely hooked (even worse). Dev tries to flatten her out, but she starts to roll over on her back. I knew if she got upside down, she would wake up and be long gone - so I took the gaff shot early and got her right in the stomach. 31 pounds of personal best halibut hits the deck for Devan – and then she wakes up! She measured 42 inches. High-5s all around. None of the pictures do this beast justice!

After a celebratory beverage, we hit the spot again. This time my rod bends and I set the hook and hand it off to Bill, and after a short battle, another legal – but much smaller – flattie comes to color. After netting it and a quick measurement and picture, the 23-incher was released to fight again. I think it was a smaller male hanging around the big female and he was wondering “where did my be-otch go?”. Don't worry dude, we'll take good care of her!

We made several more drifts for a WFO lizard fish bite, then headed out past the rigs for some sharking. Chumming for several hours in 62-degree water produced absolutely nothing – except what I think was a pelagic stingray checking out one of the baits - so we headed in around 3:30. We saw a couple giant blue whales on the way back to top off the trip. Nice!

Devan with his monster halibut: 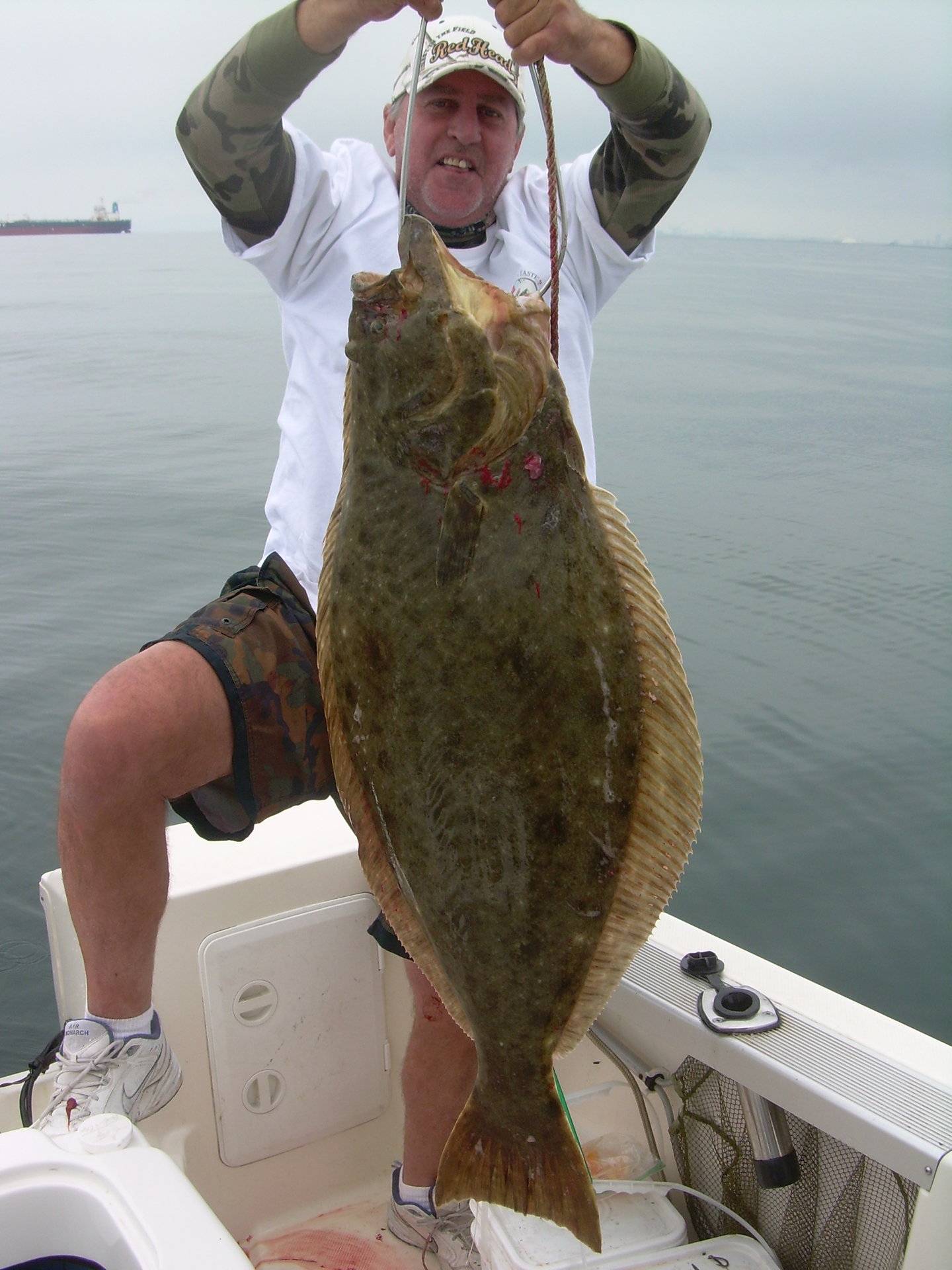 Bill with the participation trophy: 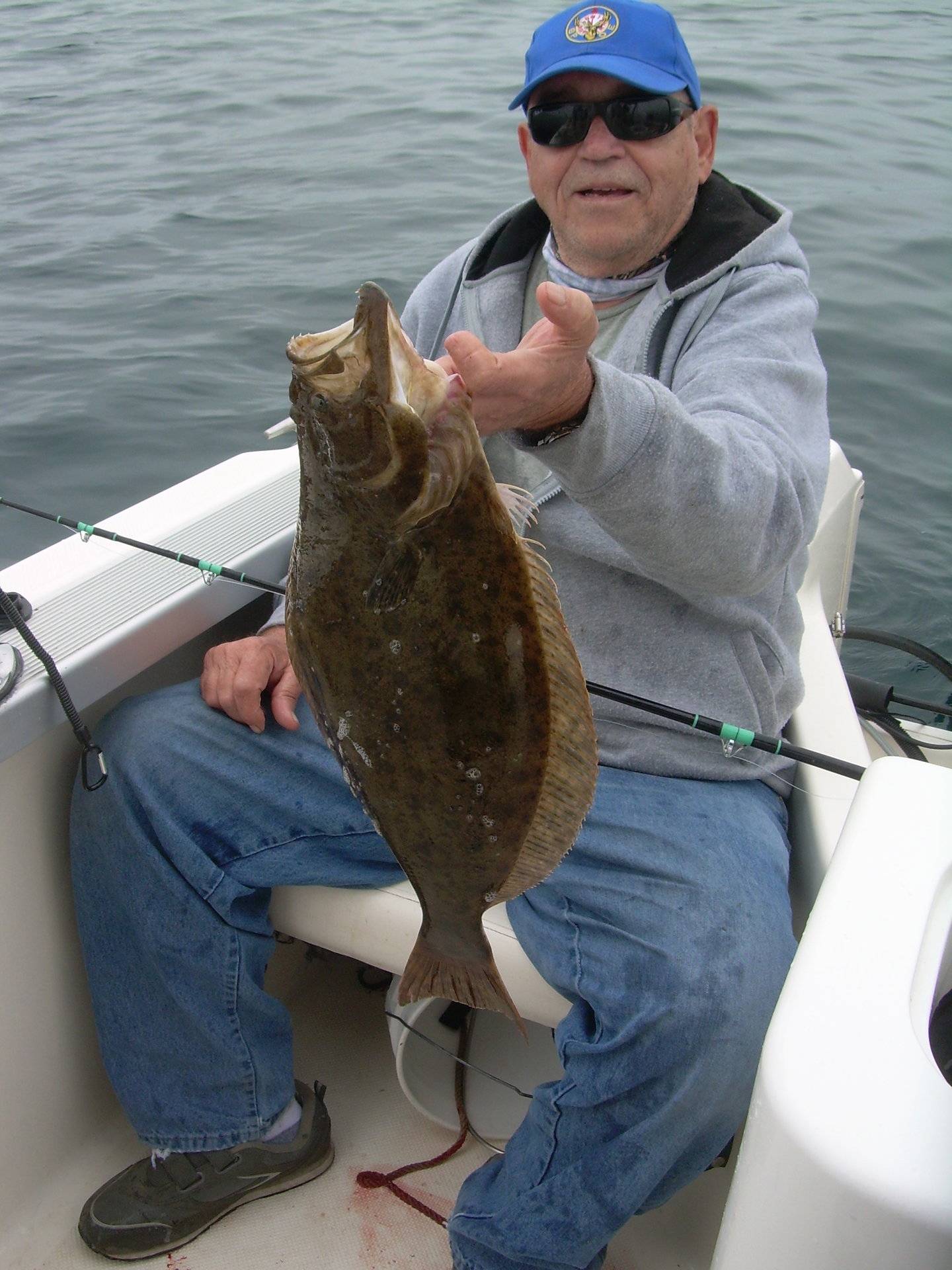 Reactions: historic, RiggingSoCal, tweaker and 35 others

Nice Slug of a butt!
Reactions: Hardcor and mhanson59hb

Mike, the photo does Devan's butt plenty of justice, trust me. Out-fricking-standing!
Reactions: Hardcor and mhanson59hb

Great report Mike and a great story. Fishing with your son and showing your skills to your friends is cool but calling your shot and putting Devon on his PB Slug Halibut is really cool.
PS Nice call on the gaff shot
Expand signature
The Killer in me is the Killer in you
Reactions: Microbait, Hippie, SaltH20Angler and 2 others

Awsome job that is a great fish way to go!!
Reactions: Hardcor and mhanson59hb


Brings to mind something my uncle told my about halibut, when you get a nice one you'll think you snagged an old beach towel.
Reactions: mhanson59hb

Wow incredible catch! Wish i had those numbers in my plotter

Bill had the best spot on the boat IMHO.

Halibut fillets for all. Great job on the gaff!
Reactions: mhanson59hb

mhanson59hb said:
and then she wakes up!
Click to expand...