As the season progresses, a smattering but steadily increasing number of dorado have begun to arrive at Cedros Island. This comes much to the delight of visiting anglers who are now able to add yet another species to the bountiful tally of fish that are available to them in this delightfully unique fishing venue.

With the exception of a few days this month that delivered windy conditions to the Island, the weather has been warm and sunny, with balmy nights that invite anglers to end their active day on the water comfortably seated under a blanket of stars sipping on their favorite beverage.

Eric Nevers was visiting Isla Cedros for the 9th time along with his group. This time, his group included Jim Heuring, Ted Smoyer, Dean Smoyer, and Kyle Raskin. Nevers was returning to the Island again after having fished here only 4-weeks prior.

This time, he once again enjoyed banner fishing along with his buddies and took limits of yellowtail each day weighing between 20 and 25 pounds on surface iron, and between 16 and 22 pounds trolling live mackerel.

During their visit, they also headed south of the salt docks and were able to easily catch and release over 250 checkerboards weighing between 3 and 5 pounds using swim baits and weedless plastics. They also managed to take a nice black sea bass and a few dorado between 6 and 12 pounds 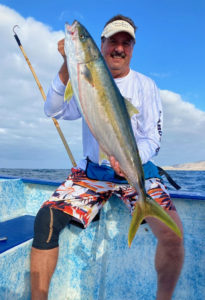 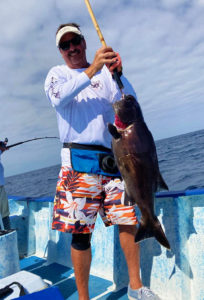 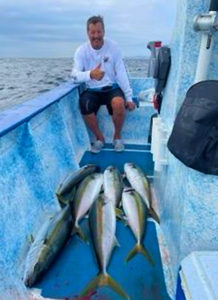 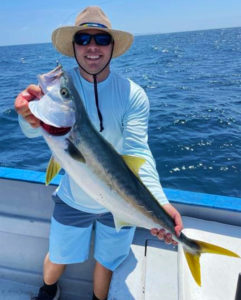 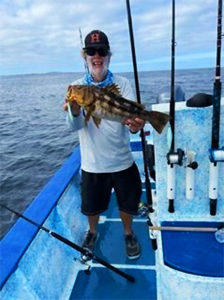 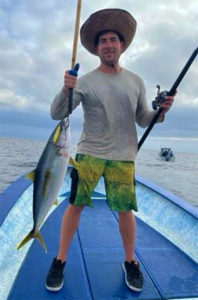 Nevers reported, “Most of our set ups consisted of Shimano Teramar rods teamed up with Diawa Lexa 400 reels. They were loaded with 65-pound braid and a 40-pound mono topshot.”

He added, “The scrambled egg surface and yoyo iron seemed to be slightly favored over this time over the mint color that was the hot pattern a few weeks ago. However, the Shimano Colt Snipers were by far the most productive bait for all of the species we encountered. As far as plastic go, Madame Lure swimbaits were working quite well and seemed to be much more durable than the Big Hammers, which were usually done after catching only a few fish. The clear metal flake was the hot color on the plastic baits.”

Nevers concluded his report by saying that they were a lot of red crabs in the water so far this month, and that made it more difficult to catch live mackerel as bait. However, they were easily able to compensate for that factor with the wide variety of artificial baits that they brought along with them. 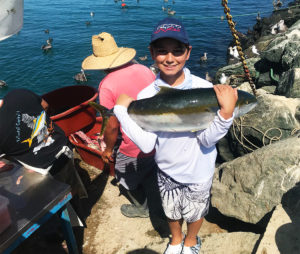 Eve Mynk reported that her son,12-year-old Evan, was treated to his very first fishing adventure on Cedros Island by his aunt, Dee, and it turned out to be the trip of a lifetime for the young angler.

She concluded, “They caught several large Yellowtail, using fresh-caught mackerel as bait. All of the fish were caught just outside the Island on a boat called, ‘Fish & Chips’ with an amazing guide!” 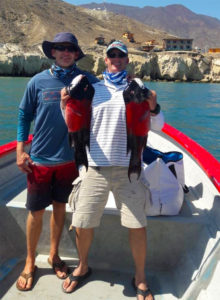 Tage Wolters, from Encinitas in Southern California, has been coming down to fish Cedros Island for the past 12 years, but this time he brought along his brother, Will, who had never been there before.

He said that, although they were not there specifically to target dorado, a lot of the anglers on other boats were doing well catching them, although few of the golden fish landed weighed much over 10-pounds.

The duo did, however, manage to take limits of yellowtail up to 35- pounds on a daily basis, along with some of the largest California sheephead he had ever caught, a few of which were pushing 3-feet on length.

Wolters concluded by saying that his brother, Will, had such a fantastic time on his first trip that he put down a deposit to return to the Island again next year, just prior to boarding their return flight to the mainland.

Earl Durham, also a Cedros veteran on his 19th trip to the Island, brought along his friends, Jay Statman, and Yugi, who was a first-timer.

He reported that the trio encountered yellowtail to 30-pounds that were “biting on everything that was blue & white” and were ending up with their daily limits by noon. They also caught a number of California sheephead weighing between 5 to 7-pounds using cut bait.

Durham concluded his report by saying, “Although there were lots of red tuna crabs in the water, we were still able to catch live bait on our Sabiki-rigs.”

Cedros Island consistently offers anglers a potpourri of hard-fighting gamefish and other species, and only time will tell what will show up in the waters off Isla Cedros in the weeks to come.

Tune in next week to find out!
Reactions: denis, lastcast619, jiggermyster and 3 others
Upvote 2

Standing by for this weeks report 9/27
Thanks Tommy.
Toggle signature
I CATCH IT. I KILL IT. I CLEAN IT. I DON'T DELIVER IT!
Upvote 0
L

Thanks for the report. I hope to fish here one day.
Toggle signature

F#@k really, i'm leaving 10-30 now i got to rethink my whole program, or at least my hooks.
Toggle signature
I CATCH IT. I KILL IT. I CLEAN IT. I DON'T DELIVER IT!
Upvote 0