Hey Y'all, this is my first post so bear with me. I figured now would be a good time to post since I have been reading up on where everyone else has been going and thought this could help some of you guys. For those of you who have Instagram, feel free to follow my little boat page @Little_marange (Shameless plug) for some of our adventures.

The TLDR: Left SD bay at 5:00 Am ish headed to the 302. Came across a solid paddy holding baby TY and dorado pretty much wide open. Closed the day out with 5 dorado after throwing 6 or so fish back. Various set ups but all line was 20-25# on ringed 1/0 hooks.

The Long and Unnecessary:
I haven't been able to get out to the deep stuff for about 4 weeks so I was chomping at the bit to chase some tuna or do anything more than La Jolla rock and YT fishing. Ended up taking three buddies who have very little experience and I myself, am no professional angler so I knew it was going to be an exciting one no matter what. After a few minor setbacks we were able to get into the water by about 4:30 AM. We got a half scoop of bait and were headed out of San Diego Bay by 5:00 AM (ish). I immediately knew we were in for a long day but we held on and pointed it for the 302 in hopes to come across some tuna or those paddies everyone keeps talking about. Big bright red sun came up so I figured if folklore is true we are gonna have a long day.

After a long ride down that beat us up and turned about 25-30% of our bait we got close enough to throw the troller in. Since I was the only one who had any idea of what we were doing we only dropped one troller so that I could let the guys drive while I tied hooks and got us set up. about 3 Miles off our mark we ran into a small strand of kelp and came up with nothing after soaking some bait for about 5 mins. Then around 7:00 AM we spotted a good sized bull kelp paddy and ran by once with the troller pretty far off with no luck. Right as we were passing we saw what looked like some bonita running west off the paddy and I almost decided to chase them down but instead looped back on the paddy while taking the troller in.

Set up about 50 yards upwind of it so the guys could get set. I baited hooks and had them drop their lines. Within 10 seconds of being in we got hooked up. Then a second, all before I could get a line in. I watched them struggle while I realized I hadn't tightened the drag down from storage so these guys were fighting hard for zero progress. Tightened the drags for them and got two dorado on the boat. By this point we were 100 yards down wind of the kelp so we took a second pass. Again, hooked up before I could get a line in the water. This time it was a little rat YT so we sent him back to grow big and come to La Jolla.

Took another pass and this time I worried less about them and got a line in the water. Again, doubled up and since I was hooked up I let one of the other guys gaff the fish. Unfortunately, his gaff job was quite the opposite and sent the dorado off free instead. I got mine on the boat and went for another pass. We did this for about 3 hours taking our time to catch them 1-2 at a time throwing back the small guys and baby yellows. It was pretty fun being out there without another boat in site for hours catching fish while the school was swimming around under the boat, sometimes within free gaff range, then watching them get 3 ft in the air jumping around as we drifted off.

We had a few boats come by and at one point one guy tried to slide inside of our drift so that he was closer to the paddy but by that time the bite had slowed down anyways and he thought it was dry. We didn't limit but could have if we got a bit greedier. Ended the day with five dorado and one guy who never got to land a keeper (thanks to the poor gaff job and baby YT) who was throwing up all afternoon.

With a guy who was sick and a slower bite we decided not to keep going west and headed back to San Diego around 12:30. We stopped on a couple paddies on the way in with no luck. The ride in was wet and long - took about 2/2.5 hours to get home but was well worth it. 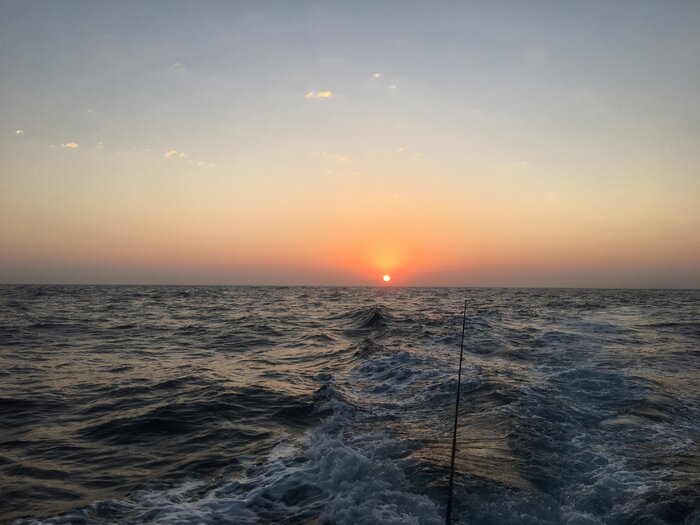 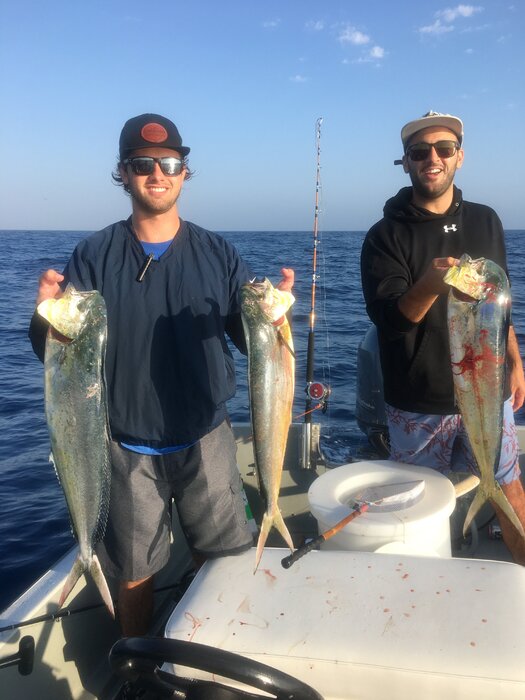 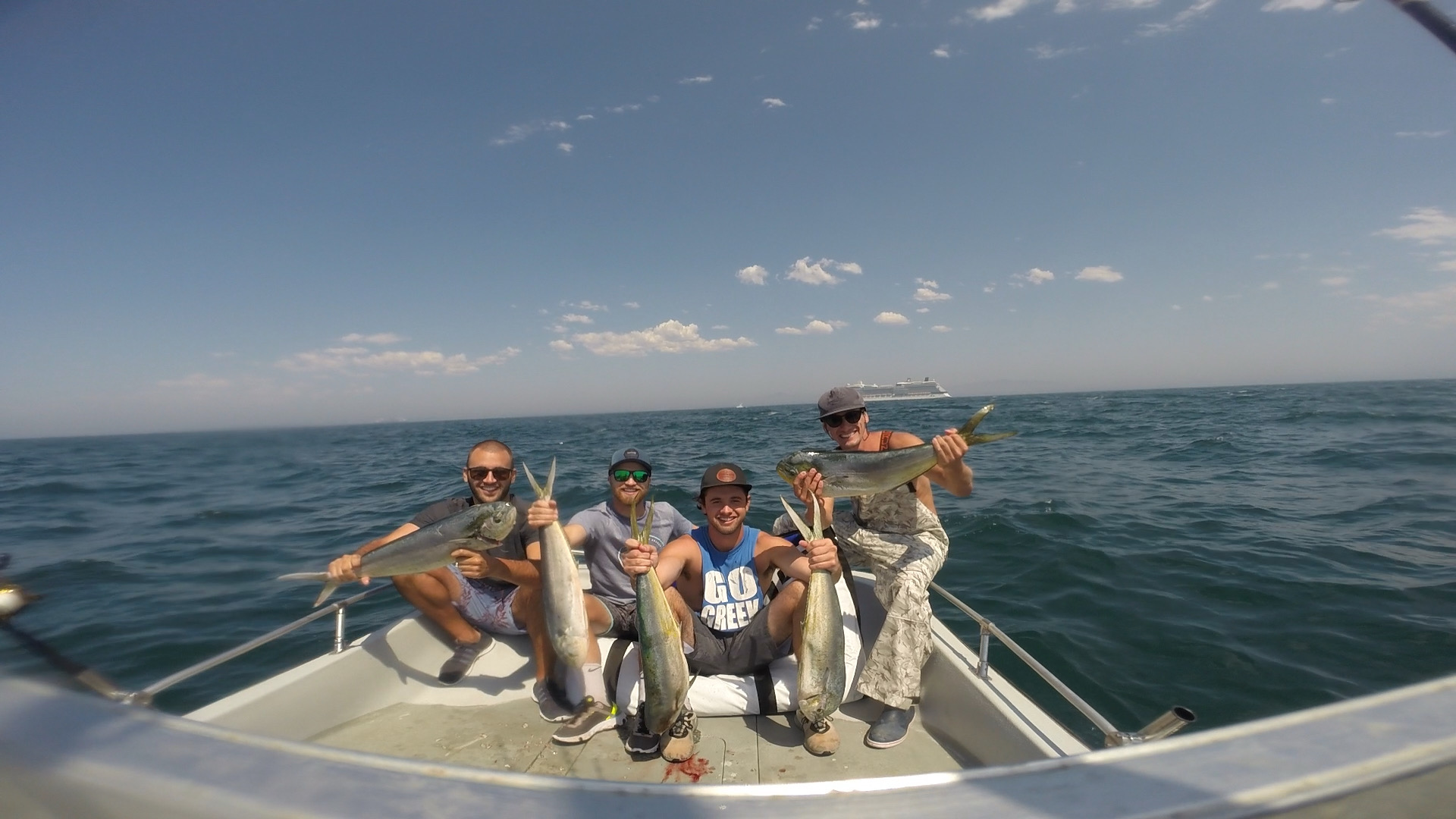 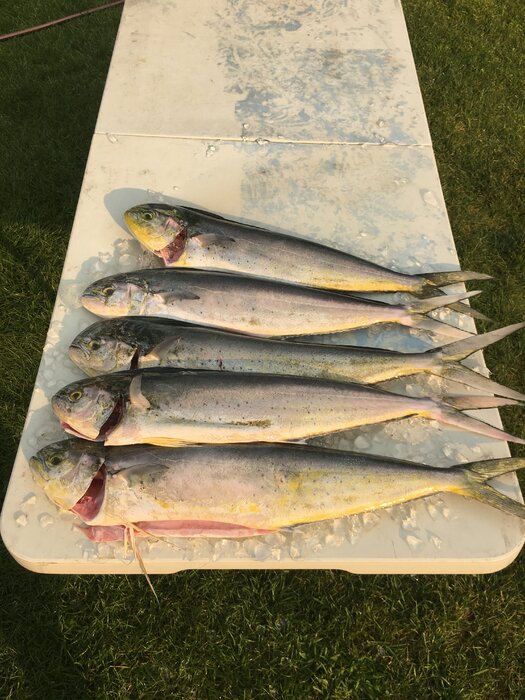 Nice work, I will recommend taking your photos of dorado immediately after landing them to show off their color.
Reactions: kelp4brains, Matt4824, HolyDiver90 and 3 others
Upvote 0

Good catch. Thanks for the report.
Upvote 0

Nice report! That bottom dodo in the pic has an oarfish vibe after getting the knife
Upvote 0
I

Gotta love it when a plan comes together. I need vitamin sea.
Upvote 0

Not a professional angler but made your passengers believers! No better feeling than to find the magic patty all on your own. I've been out of it with a boat in need of repair.....now I'm back in the game! Seems like the year for all-you-want Dorado is here...(well, your daily limit of course). I will be trying my luck this Friday. Glad you had a successful trip, thanks for the report!
Upvote 0

What a guy! Rigs his buddies all up and lets them get the first fish. Leaves the drags loose so they probably think they hooked a whale haha. Sounds like you were definitely in 'em (the fish)! WTG mang.

Catch fish first pics later! It shuts off quick sometimes! I pulled up on the 209 we started catching immediately. I’m gaffing my buddies fish it’s wide open so I’m washing blood off the deck thinking fish-in a barrel.i hadn’t tossed a bait yet. Decks all clean my turn to catch um. Not!!! Bite was over. Nothing else all day. Moral of the story . Fish first.
Reactions: djd35de
Upvote 0
Show hidden low quality content
You must log in or register to reply here.