Had eyes on fishing today for the last few weeks. Had read about reports ranging from very good to quite slow during that time. Saw the 6 and 8 fish days over the weekend. I was still going no matter what. Last night I saw Monday’s report of 27 fish so that gave me a little more hope. I drive almost 400 miles to fish San Diego so all the stars need to align for me to go.
Made it to Seaforth early this morning after a short night sleep at Skipjack Robert’s house. I think top to bottom they have the friendliest people working there, from the cashier to the crew to the chef and skipper. The crew actually walks around looking to help you rig up. I went ahead and let one of them tie my jigs on. We left with a full load and headed to South Island. As we approached our starting spot you could see birds working. We slid up on them, threw chum, and they reacted nicely, boiling in the chum line and acting like they were hungry. I didn’t have high expectations for the trip, but I just wanted to get a shot. Started with my favorite yo yo- a 6X in red crab. Dropped down and started cranking- bit, hooked up, but quickly pulled the hook. Next drop I reeled up to the surface and saw a fish flash on it but miss. The story of the day was the fish maybe making a quick show on the chum, maybe a few biters, then off to find the next school. This first school hits and leaves then we move on. Next school I drop, hook up, and bring a nice- maybe 15 pounder- fish to gaff and the day is already good. Next school same thing- but this time a slightly smaller model gets my tag. It’s probably 8:15 and I’ve got 2, out of 12 for the boat. I’m obviously very happy. We hit a few more schools for a few handfuls of fish. Matt- the skipper- throws a surface iron and hooked a fish on a nice visual strike. I’m next to him and he tries to handoff to me. I told him I already had 2 and to give it to someone else. Before that one is landed he throws another plug and hooks up, and hands it off. Right about 9AM the bite completely dies, with the sitting at 24 fish. Apparently the same thing happened yesterday. I’m obviously satisfied but that left a lot of guys without. We motored around for several hours, including a visit to the rock pile where we saw nothing.
We worked up to the middle grounds where he did see some fish but most of them did not add to our score. As the afternoon wore on they started acting a little better. We had one school walking up our chum and it looked like we might get a good hit but the sea lions showed up and cut them off. We did get some biters with several being hooked on the yo yo. I hung one as well as the only female on the boat. Earlier she had caught her first ever yellowtail and now she’s hooked up to number three. I ended feeding mine to a dog and that was the last action for me for the day. For the afternoon we added another 13 fish to the RSW but we had heavy casualties to the sea lions. The afternoon fish were also a littler better grade, I think about 16-18 pounders maybe with some approaching 20.
Overall it was a nice day. The water was good. We had a little breeze but it was comfortable. It seemed like we had a lot more than 37 fish, although I’m sure the guys that didn’t get one might not feel the same way.
I’m hoping to get out again in the next couple weeks. There are a lot of fish at the island. I’m glad we didn’t have to try and fill our sacks with bottom fish. I think the majority of our fish came on the yo yo, with a few on the surface iron, and a few on bait. Please excuse mistakes. I’m having trouble keeping my eyes open. 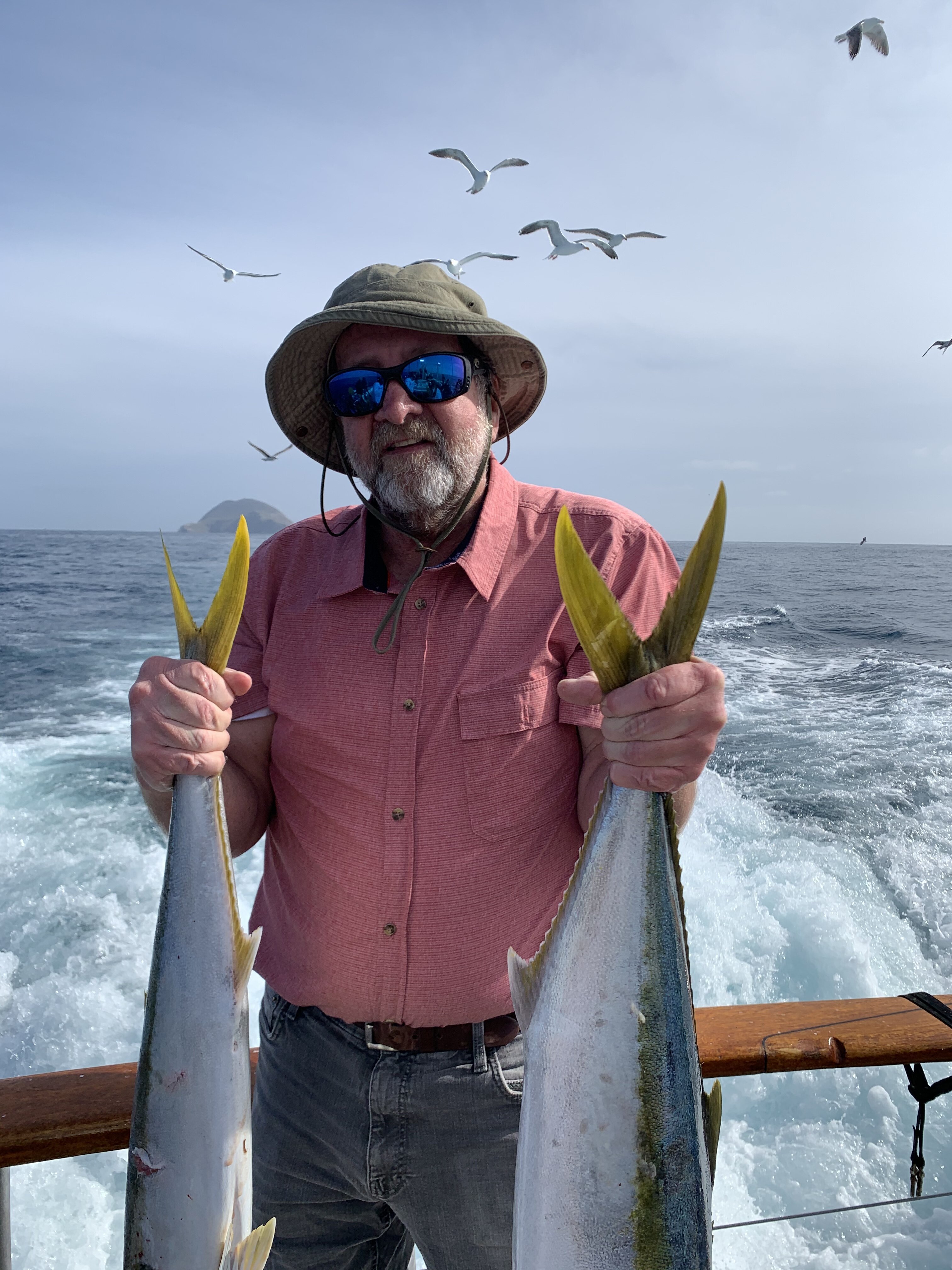 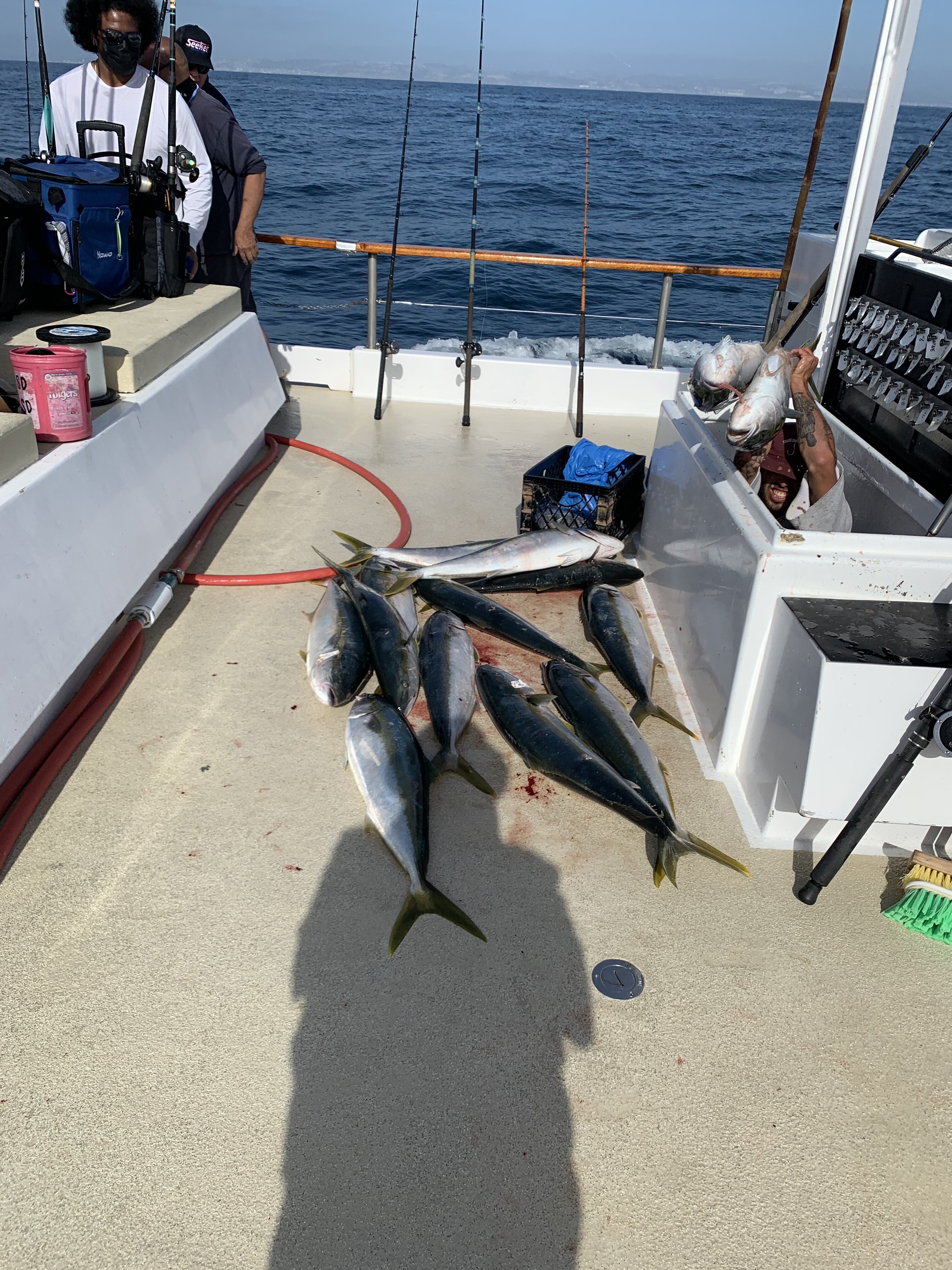 Good read , thank for the info! I’ll be heading out on the SD in two weeks.
Reactions: Mateo el Flaco and John Stidman
Upvote 1 Downvote

Solid report, congrats on bringing a couple into the boat. Makes the drive back a little easier.
Reactions: Mateo el Flaco and John Stidman
Upvote 1 Downvote

Great report thanks for posting. Nice grade of fish at the islands for sure.
Toggle signature
Jon being Reel Phat on the Reel Deal
Reactions: Mateo el Flaco and John Stidman
Upvote 1 Downvote

Glad you made trip.
Even gladder you got fish!

Class act guy. He saw me farm 2 at the rail n was kind enough to offer me one of his. Thanks again! Wanted you to know my son was stoked. I salted n iced that fish down all day Tues. Grilled fillets med rare with ginger tamari sauce Wed night. Smoked the rest of the fish, and we ate it lunch/dinner with rice on Thur, and with sesame oil edamame n noodles lunch/dinner on Fri. And even gave some to another neighbor family we are close with. Completely devoured and truly appreciated!
Reactions: OldDawg_NewTricks, Mateo el Flaco, SaltH20Angler and 1 other person
Upvote 2 Downvote

Jurel Hunter said:
Class act guy. He saw me farm 2 at the rail n was kind enough to offer me one of his. Thanks again! Wanted you to know my son was stoked. I salted n iced that fish down all day Tues. Grilled fillets med rare with ginger tamari sauce Wed night. Smoked the rest of the fish, and we ate it lunch/dinner with rice on Thur, and with sesame oil edamame n noodles lunch/dinner on Fri. And even gave some to another neighbor family we are close with. Completely devoured and truly appreciated!
Click to expand...

I’m just glad to hear you got it. Didn’t see you as they were passing out the fish and I was worried it got lost in the shuffle. I’ll be out in a week and a half again if things work out. Hope to fish with you again.
Reactions: John Stidman and Jurel Hunter
Upvote 1 Downvote

Thanks for the report, and congrats!
Reactions: John Stidman
Upvote 1 Downvote
Show hidden low quality content
You must log in or register to reply here.