Amid rumors of a decent yellowtail bite going on at San Clemente Island, and a great looking weekend weather forecast, Danny Lynch and I went in search of a Saturday trip over Easter weekend. We hadn’t fished with Captain Rick Slavkin on the Oceanside 95 since last season, so we booked a couple spots on an open party trip and started packing.

Danny and I drove down to Oceanside Friday afternoon, with a stop to pick up Danny’s friend Joey. We got to the landing, unloaded, and I parked in the lot across the street. We put our gear in line, signed in at the office, and got some fish and chips from one of the little local restaurants.

We got the word to board around 8:30, everyone checked in with license in hand (more on that later) and we were on our way. Captain Rick gave the safety speech and talked about the plan for tomorrow. We’d be heading to San Clemente Island (of course). We loaded up with some nice looking sardines, but Captain Rick noted that most of the yellowtail had been caught on the iron. He recommended a setup for bait as well, just in case. The sardines were a mix of small and medium, the crew suggested 1 to 1/0 size hooks.

I rigged up for jig and for bait, and went to bed. I woke up in the middle of the night and it was quite bumpy… a few loud bangs made me almost want to get up and check our tackle bag on deck to see if it had fallen over.

I woke up much later to the smell of bacon and got up. We were surrounded by sportboats, probably at least 10 or 12, all shuffling around each other and drifting through a small area. Most of the passengers were fishing iron, I started off with that as well. With all the red crabs around I tried a Bait Wraps red squid. Captain Rick was metering fish, but none were biting. Not much current or wind, I switched to a 6X Jr sized red squid. I ordered breakfast, and just as Doug came out of the galley with my plate I heard “We’ve got one hanging!” Doug offered to put my breakfast in the oven, and I ran back outside. Jolene Thompson was coming up from the stern to the bow, and I think everyone she passed asked “Bait or iron?” Bait. Nearly everyone immediately switched to bait. Jolene landed her fish (that first fish of the day took JP…) I did a few more drops on the iron, no one else got bit, so I went in and had my breakfast.

I switched to fishing a sardine. After a while a couple more fish were caught on iron, seemed mostly scrambled egg, so I tried a yellow jig. Nothing. Another was landed on a light green and white iron, so I switched to something closer, a white mackerel. Third drop and I was bit, and landed my first of the day! 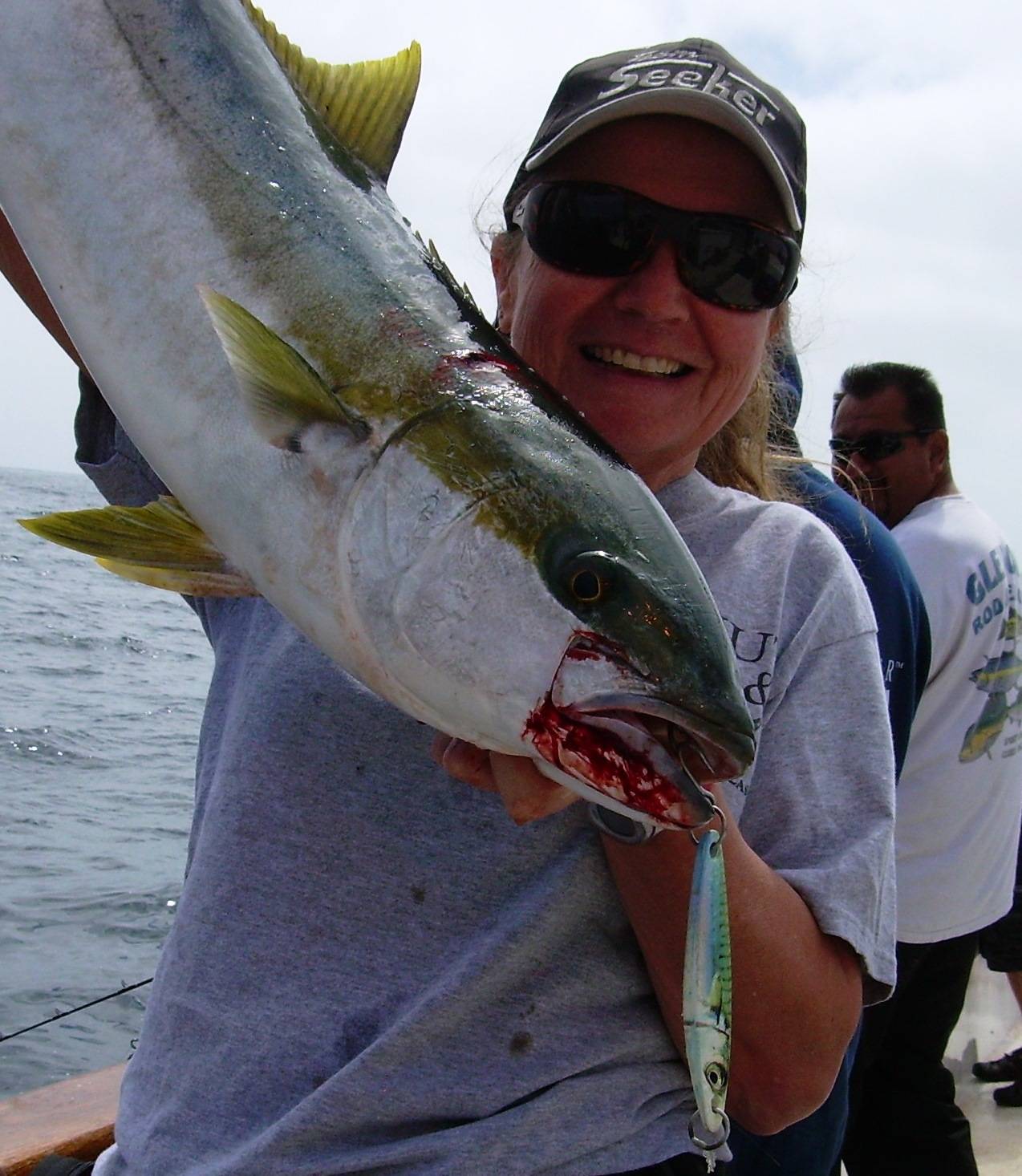 The fish came in waves, with 2-3 people bit at a time, and one or two landed.

Somewhere mid-morning we were visited by fish and game, who checked all our sacks and our licenses. The wardens were very nice, laughed at our occasional jokes, handed one passenger a pen and told him to sign his license. (Very nice of him, as he could have just as easily issued him a citation for that.) When they left us (I think we were first), they made the rounds to the rest of the boats in the area, and then left.

Later Danny caught a nice yellowtail on a flylined mackerel, I switched back to bait for a few minutes (mostly to rest!) but as Captain Rick predicted, most of the fish were still coming on iron. 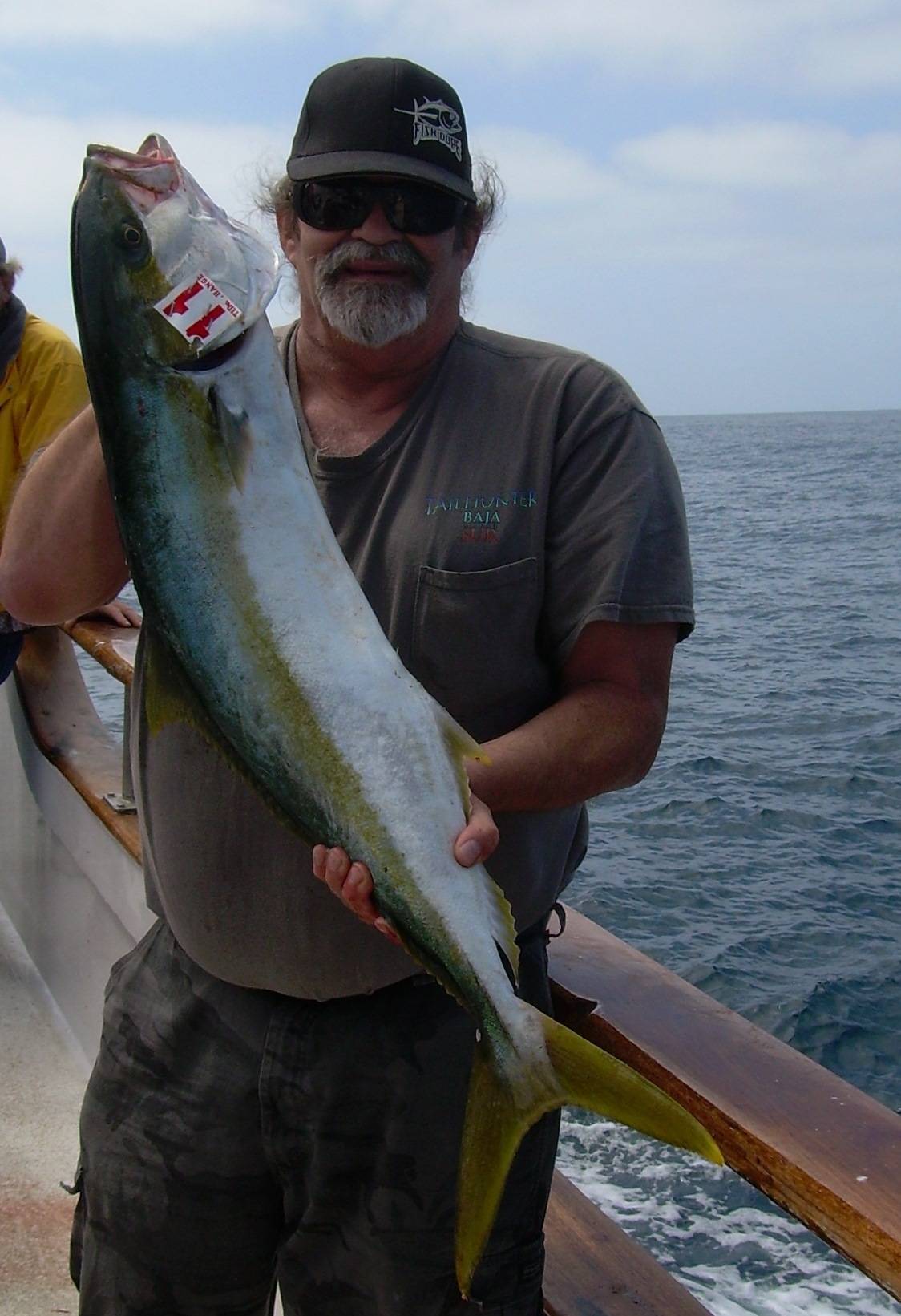 I switched back to my jig and within a few minutes hooked and landed my second fish of the day. 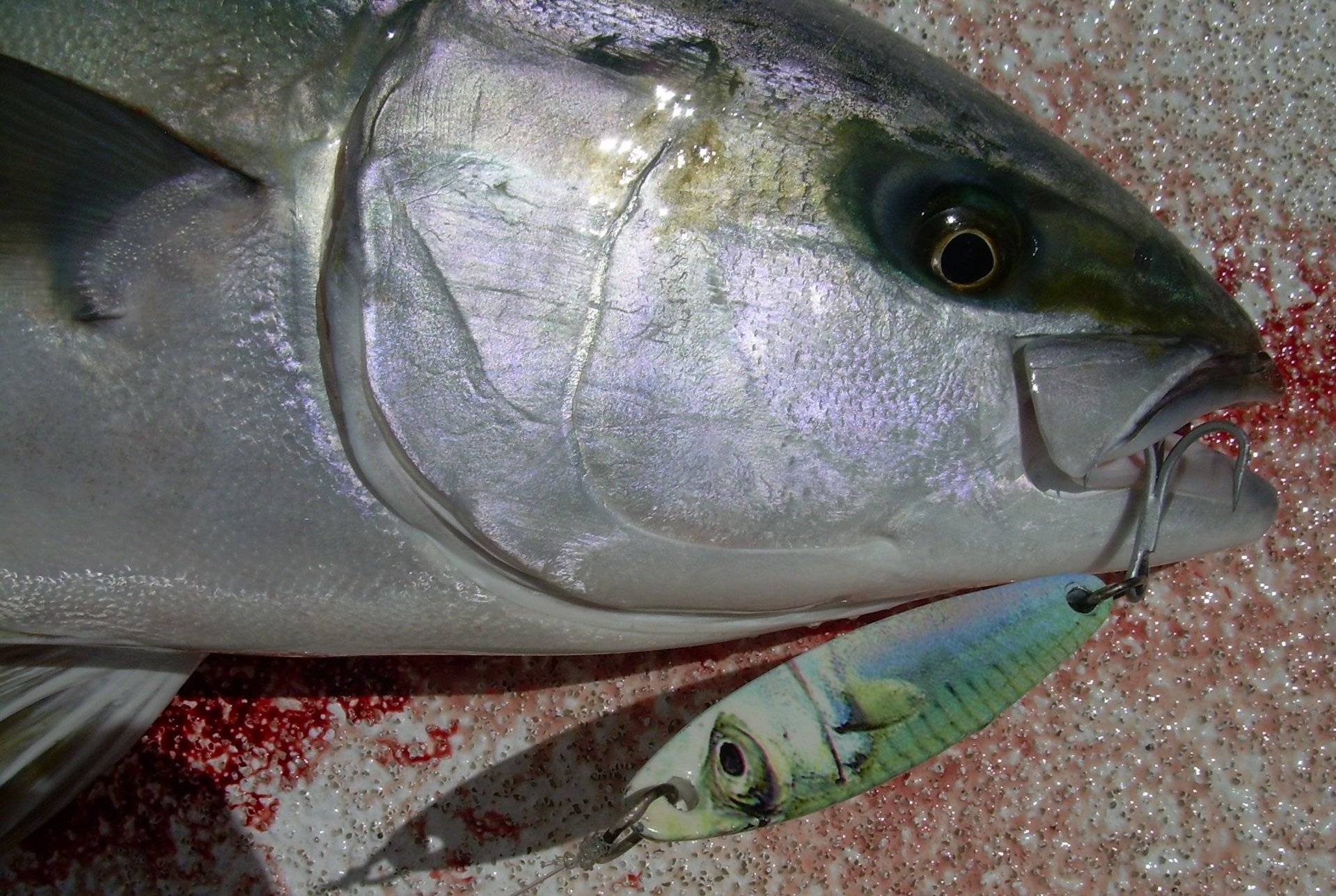 We had a slow pick at the yellows all day. There was cut squid, and a few people took an occasional break to drop a piece of squid and pick up a few rock fish and whitefish. 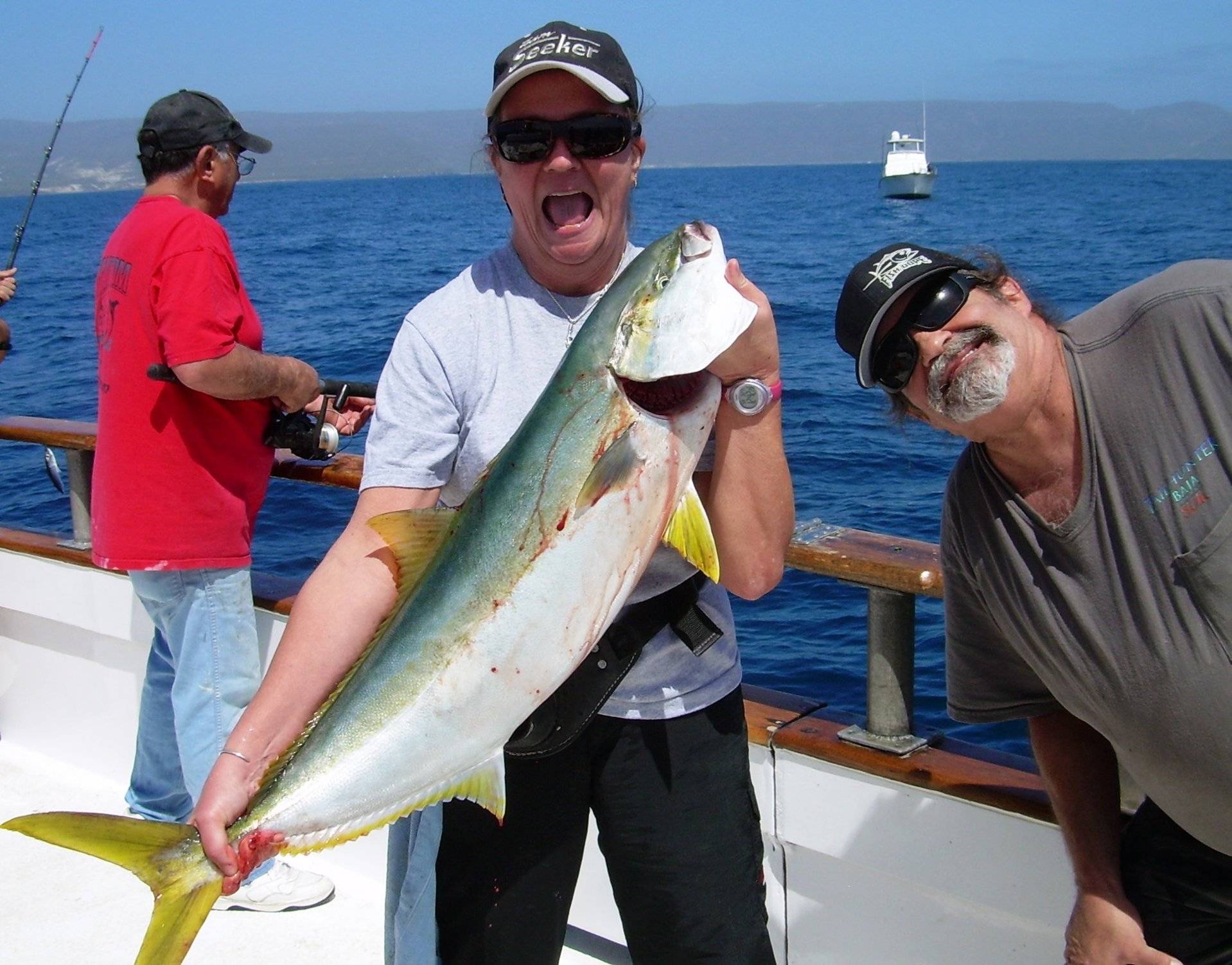 With no trip on the books for Easter Sunday, Captain Rick stuck it out a little later than usual, but the yellowtail bite had drifted off to nothing. We called it a day and headed in with 20 yellowtail and a bunch of miscellaneous bottom fish.

Doug made tri-tip and offered sandwiches on the way in, with cole slaw and baked beans. Nice flat ride home with following seas. We actually got back much earlier than I had expected.

We had a great group of anglers and a lot of fun! I met a lot of people in person that I’d only talked to previously on-line, and saw a few old friends as well. We had beautiful weather and a fun day on the Oceanside 95!

Sorry, I didn't take a whole lot of pictures... I was in the bow most of the day, and the crew was right on it getting the yellowtail in the stern tagged and chilled as soon as possible...!
Expand signature
Pacific Lures Pro-Staff
Soft Steel USA Pro-Staff
Reactions: kbray001, SPENCERWASHERE, Noah & Scoot and 12 others

Excellent write up as always! You sure do have a talent for that!
Expand signature
Danny
Fishdope.com
1st Bluefin Tuna of 2012

Do some of the yellowtail look thin/skinny or is it just the picture?
Reactions: The Sea Hag

Boat
Which ever one will have me...

Nice write up as always Pam. I was on the Fortune in the area as well. Hooked 4 landed 2, for some reason the two I lost just didn't stick. One didn't last very long, so I get that, but my last one I fought for about 10 minutes, gained line and then BAM, spit the hook?

Thanks for the report.
Reactions: The Sea Hag

Do some of the yellowtail look thin/skinny or is it just the picture?
Click to expand...

Some of them were quite long and skinny... There's been a lot of red crab in the water, and I hear they're eating a lot of it, but one of the passengers mentioned he'd heard there's not a lot of nutrition in those. So maybe they're not real well fed...? The deckhands checked a few of them being filleted and said there were not a lot of crabs in them, but they found some very small squid in a few.
Expand signature
Pacific Lures Pro-Staff
Soft Steel USA Pro-Staff

Pam, great read, thanks! What's that jig you were using, looks realistic?
Reactions: The Sea Hag

Sounds like a fun trip, thanks for the report!

Any clue how deep of water you guys were targeting?
Front/back side of island?
Reactions: The Sea Hag 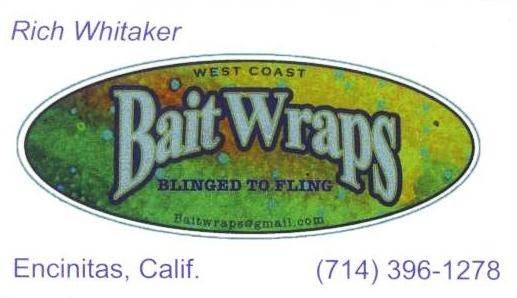 Bait Wraps jig. Rich Whitaker makes them. He's working on a web site, right now he sells them at Squidco, and you can look him up on Facebook.

Here's a few more... The third one from the right is the one I was using on Saturday... 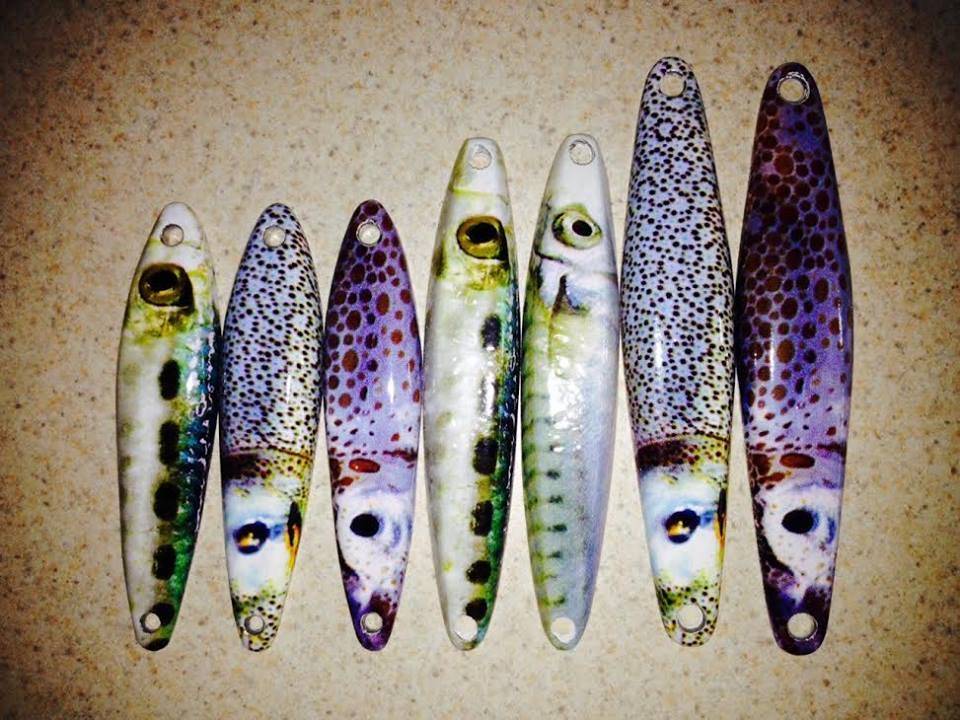 RyanErb said:
Sounds like a fun trip, thanks for the report!

Any clue how deep of water you guys were targeting?
Front/back side of island?
Click to expand...

We were generally fishing in around 200 feet of water. Fish were usually metered about halfway and below... 100 to 180 feet. I was dropping to the bottom, then wind the first few wraps against one side of the reel so when I dropped again I knew when I was almost to the bottom... I think I got bit both times quite a ways up.. so around 120-140 I'd guess. I got bit at least twice on the drop.. but I guess I just wasn't quite quick enough on the wind to hook them!
Expand signature
Pacific Lures Pro-Staff
Soft Steel USA Pro-Staff
Reactions: RyanErb

Way to go Pam, a couple of dandy Tails there! Congrats.
Expand signature
Thanks for your report. Hook up! Cory
Reactions: The Sea Hag

I think i'm in love.
Reactions: The Sea Hag

Great write up Pam, I see only a few pics but they are good ones! Glad you got out there. always a good time on the water for sure.

Never tire of your reports Pam. Love all the details, especially lunch.
Reactions: The Sea Hag

Great report! Thanks for sharing. Those jigs are cool looking...and obviously they work!
Reactions: The Sea Hag

Pam!! Wow!!! We have met several times ! I m in my spring home in Illinois so when in Rome...... Been crappie fishing!! Which is one of my dear passions!!! Plus my son Gavin LOVES it!! Lol You got me into those jigs last year. A lot of stuff looks great??? But suck. I use the jig just to the left of the one you show !! Next week we are back!!! I can't wait to pick up our boat( not the paying for the upgrades!! Lol) but to using it!! So will I go to?? 60 mile for BFT of LJ for YT or the island where you just fished??? Thanks again for you epic writings!!! Jeff
Reactions: The Sea Hag

Congrats and thanks for sharing. You just made the Front Page of BD!
Reactions: The Sea Hag

Capt. Scott Goodwin said:
Congrats and thanks for sharing. You just made the Front Page of BD!
Click to expand...