Short version: This weekend was about the same as last, we a saw less dorado but others reported good action on them. We and many others had excellent billfish action most of the bites are on ballyhoo. Teaser in the corner raised a lot of fish. Scroll down for pics.
Full report July 4-6:
Thursday: headed south towards the horseshoe in bumpy seas. Spotted a marlin at 10 miles, didn't take the bait but we decided to start fishing. Winds really picked up and we never made it to our destination. Had some old timers onboard and though they never said anything it was clear they weren't having much fun soaking wet and bouncing around in our little center console so we turned around at 14 miles and called it shortly after, had a few bites but nothing stuck. rumor was a big sporfisher made it to the spot and released 20 billfish, chingado!.
Friday: forecast called for slightly better conditions and the morning proved to be much better, still some chop but very fishable. Learned our lesson, ignored early signs of life and bombed out to the spot. Started fishing around 15.5 miles out and had a hookup within 15 minutes. Striped marlin release. My uncle's first in over 15 years. High 5s and smiles all around. Good action all day. finished with 4 out of 5 marlin and 1 for 2 on sails. 5 guys onboard everyone got a billfish. Kept a 90ish striper for the Traeger everything else was released biggest looked to be around 100. All fish caught were on ballyhoos with circle hooks, had 2 jigs in the spread all day that went untouched.
Saturday: Went further north on a 235 looking for dorado. started fishing at 15 miles. At about 20 we hit a flurry of billfish action. hot bait was a big pink jethead tight to the teaser but the ballyhoos also got bit and a better hookup ratio. We had 8-10 billfish strikes in those first few hours but struggled to get them hooked. Th action tapered off severely as the day went on and we drifted south looking for dorado (a mistake in hindsight). Only had a few small ones come through, they would bite the tails off the ballyhoos and move along. finished the day with 2 marlin and one sail all released. I guess we really are getting spoiled when that's a slow day. There was a tournament going on that same day and Our 3 fish would've had us right in the mix. Just gotta do better on that hook up to release ratio to hang with the top boats, I heard on the radio they had over 60 hook ups reported for around 15-20 boats.
All in all a great trip with my father and 2 uncles onboard. No captain just my brother and I running our new little boat, constantly trying new stuff, screwing it all up, getting our butts kicked, adjusting and getting better every trip. Only bad part of the trip was the 3 hour wait when we hit the border around 1pm on Sunday. Holiday weekend, should've gotten up earlier.
Suerte,
Frank 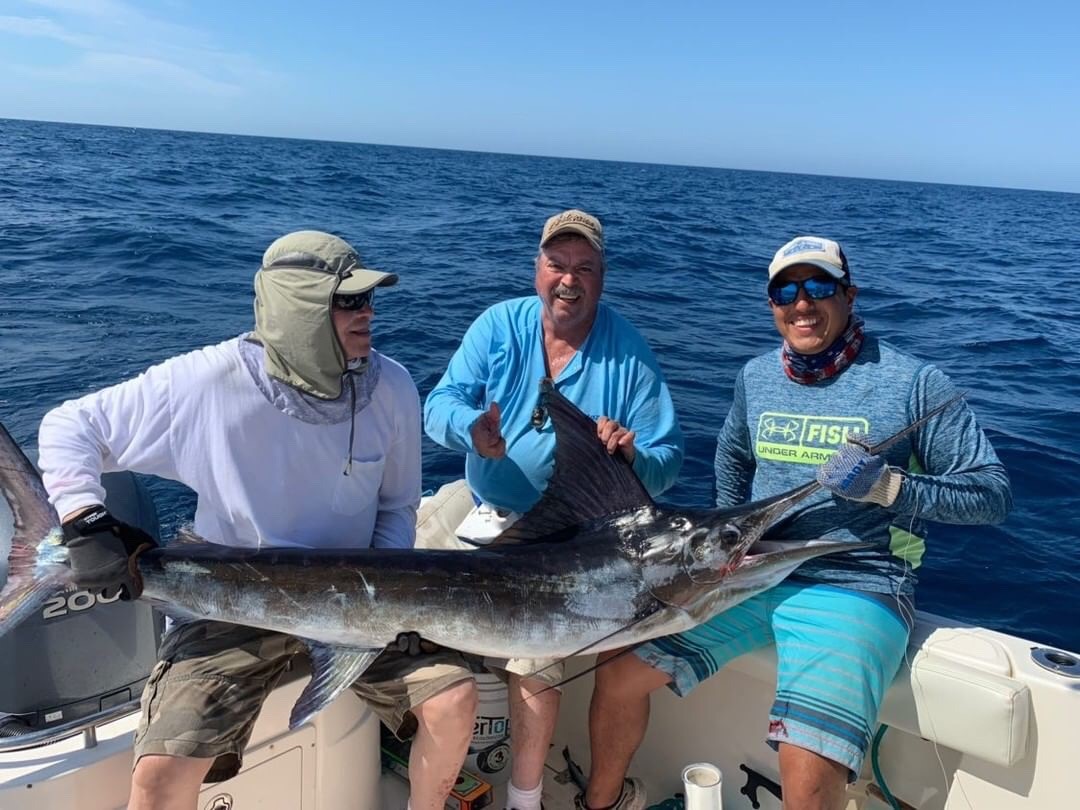 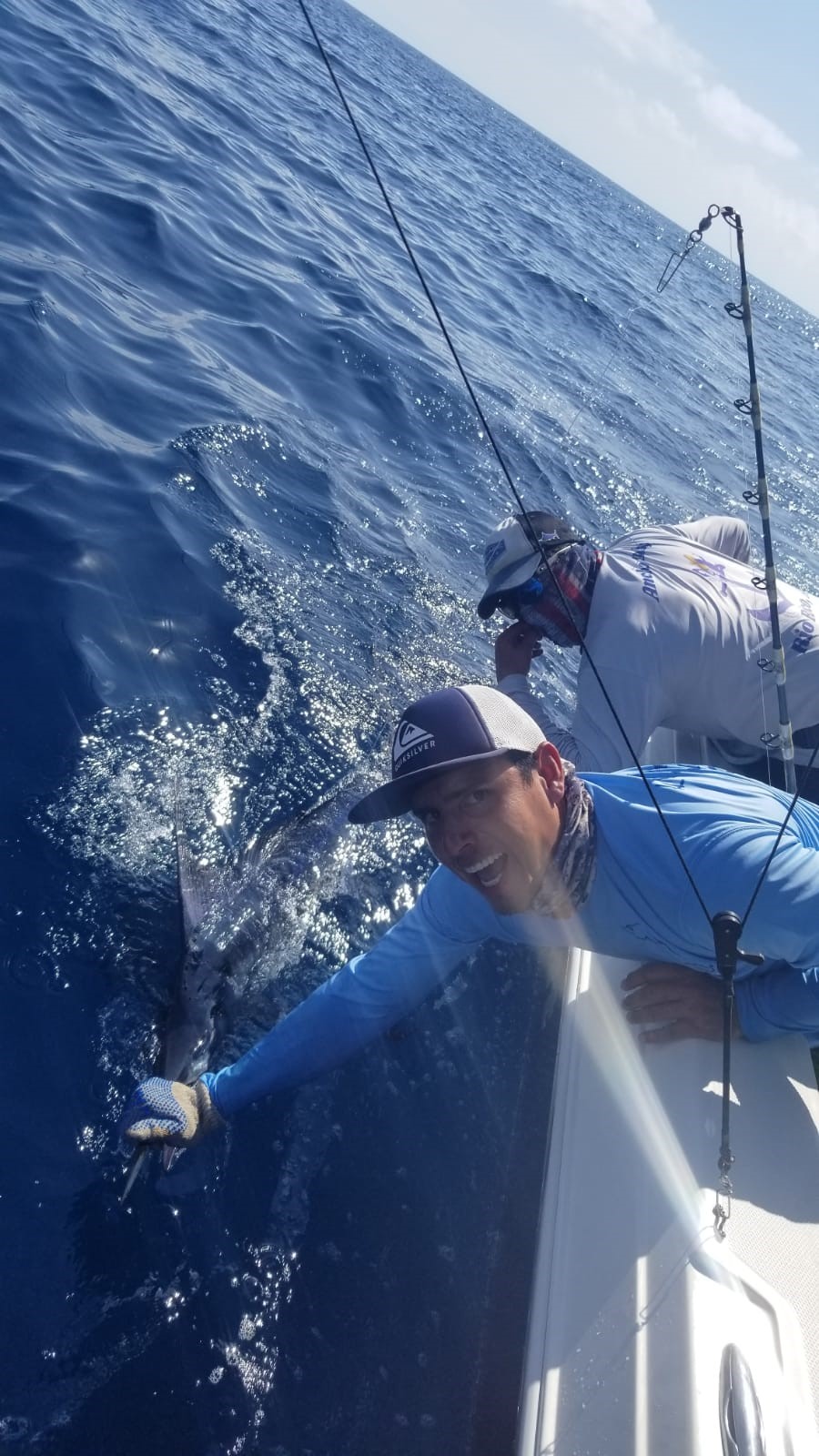 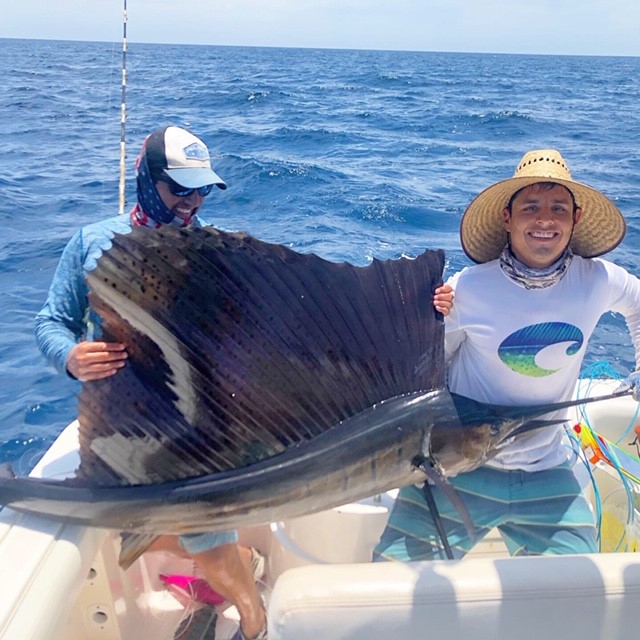 That’s super cool. Too funny when that is a slow day, you are getting spoiled

Thanks, Got a call yesterday that the dorado have shown up in better numbers. still the medium to smaller grade but there were many limits caught the last few days. Ironically, I will be at the East Cape this weekend for the Dorado shootout were the dorado fishing has been pretty slow from what I hear. Ni modo should be a good time either way and maybe we'll get lucky. Hopefully the Guaymas commercial fleet doesn't move in and those fish are still around when I get back.
Suerte,
Frank
Reactions: Rx Fisherman
R

Very nice tournament the Dorado ShootOut, wish good luck for your team! I've heard recent reports with decent numbers for the big mahi mahi at 40-60 pounds, with better quality than quantity and every day consistent, just in time for the tournament, better than in recent years ... I think the winner will be a 50-60 pounds Bull with hard closed numbers in scales.
Plus a lot of striped with nice blues in the mix and tuna for sashimi w/ cold beer...
i live in northeast sonora mx border w/douglas AZ, not easy going saltwater fishing from here, so i will go fishing until august to Kino & East Cape ...
Reactions: FM-Outside
R

25 Pounds the overall winner mahi, thinked would win a big bull but my prediction failed, heard the wind was blowing making it difficult to go far away finding the big winner, just a day before a boat caught a couple of big mahi in the 50-60# at the cabrillo seamount out of san jose.

yeah, it was really rough but we went outside swinging for the fences we made it out to 37 miles and trolled all but the last 4 miles back to the hotel. Had 5 marlin strikes, never saw a dorado. Fished 2 more days trying for tuna in the mornings down south with no luck. trolled for marlin in the afternoons. missed a blue yesterday and 3 stripers today. Not great fishing by east cape standards but there’s plenty of marlin around. Our local friends were saying these out of season winds churned the water up at the tuna grounds and it should turn back on after it settles down.
R

well that´s fishing, very good anyway...in what boat did you go??
i will be there for my town (la ribera) annual local tourney on august 15, hoping to catch a nice blue..

Rx Fisherman said:
well that´s fishing, very good anyway...in what boat did you go??
i will be there for my town (la ribera) annual local tourney on august 15, hoping to catch a nice blue..
Click to expand...

Nice boats & crew all of them!!