Looking to get in a “last call” for 2016 Rockcod, Dave texted me Monday morning and invited me to go fishing with him Wednesday-12-28-16, on his 28’ Farallon “Hooked”, with friends Ron, Kevin and Bob. We left Dave’s slip in Newport Harbor at 5:02 am. Our destination was San Clemente Island, starting at the West End.

As we exited the harbor, there was no moon and no wind, very dark. We found the seas to be very calm, with a slight residual bump from the previous day’s windy conditions. For a change the weatherman was on his game? I think he has been wrong at least 66% of the time this year!

Although there was little wind, the bumpy swell kept us under 15 knots most of the way out to Catalina. When we reached the lee of the island, we were able to punch it up to 20 knots and then conditions turned to complete glass and our speed increased to 23+ knots.

We reached the west end of San Clemente Island just before 8am. Dave began our first drift in deeper water where they had caught five Lingcod to 19 pounds the week before. There was a fast drift and no current, strange? We all caught mostly nursery fish, with a few decent sized Coppers and Whitefish. Bob caught our only Red in this area. The Whitefish seemed to be everywhere today, no matter the depth. 300+ feet is not normally a Whitefish hangout area?

We tried numerous spots in the deeper water for much the same. Dave moved us to the edge of the backside of the island in 250 feet depth. The Coppers were very active and kind of saved the day for the lack of Reds. I did finally get on the board with a decent sized Red:

Dave targeted more areas along the backside of the island in 220 to 250 feet of water. The fish were on the chew and Coppers were thick:

Here is Kevin with a nice Copper with camera shy Bob in the background bleeding out a smaller Copper:

I came up with numerous doubles with this Copper combo being one of my best:

It was drop dead gorgeous out and everyone quickly shed their jackets and sweatshirts. 75+ degrees, 50 miles offshore in late December, does it get any better? Eat your hearts out Chicago and New York!

We picked away at the fish adding some nice Johnny Bass, Santa Marias and Starries to our count. It was getting late and Dave moved us back to his favorite shallow water spot nearer the front side of the island. The Whitefish were as thick as flies and we all caught and released many. Most of the time I could not even reach the bottom before being stopped on the drop.

Having plenty of fish on board we called it a day at 2:40 pm. The ride home to Newport was sensational and we were outside the harbor to clean fish within 2 hours, running at 25+ knots all the way with barely a bump.

Thanks Dave, you always put us on the fish. It was a pleasure fishing with you again Ron, Bob and Kevin.

Hook up! Cory
Toggle signature
Thanks for your report. Hook up! Cory
Reactions: MarktheShark56, mhanson59hb, doncatfish and 8 others
Upvote 0
A

Whitefish being everywhere seems to be a theme this year. Are people not keeping them? It's likely their turn in the cycle, so I expect to see more of them the next few years.
Last edited: Dec 28, 2016
Reactions: Tunaslam
Upvote 0

Usually find WHITEFISH shallower also, where I fish'em at SBI.

Azarkon said:
Whitefish being everywhere seems to be a theme this year. Are people not keeping them? It's likely their turn in the cycle, so I expect to see more of them the next few years.
Click to expand...

They are obviously very mobile, here today and gone tomorrow! They are good eating though and fight hard all the way to the surface!
Toggle signature
Thanks for your report. Hook up! Cory
Upvote 0

Your welcome Cory. Had a great time in beautiful weather !!! Can't wait to head out again. 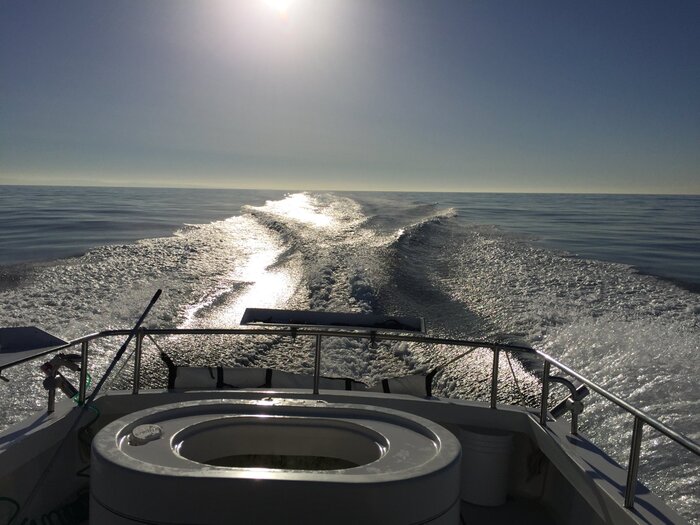 [email protected] said:
Your welcome Cory. Had a great time in beautiful weather !!! Can't wait to head out again.

Me too! See you in 2017 Dave!
Toggle signature
Thanks for your report. Hook up! Cory
Upvote 0

[email protected] said:
Your welcome Cory. Had a great time in beautiful weather !!! Can't wait to head out again.

Not Sunday, Monday! Fight on! I will be there!
Toggle signature
Thanks for your report. Hook up! Cory
Upvote 0

You are right about the whitefish, they seem to have taken up residence on all my shallow water rock fish spots (170 feet or less).

Looking forward to your reports for next year!

Thanks Cory,
Great report as usual. Have a great new year. Gary
Reactions: Tunaslam
Upvote 0
Show hidden low quality content
You must log in or register to reply here.