I decided that I needed to scratch another itch, having not fished SCI in a long time, ever since Dave sold his boat “Hooked” last year, a sad day in my memory, as Dave has SCI dialed in for fishing Reds and other fish at the island like no other private Captain I have met, locally or anywhere.

I left my home in Diamond Bar at 7:40 pm and headed south to Newport Landing; arriving at 8:10 pm. I was no familiar Parking spots in the area, having not fished at this Island in probably 15 years? I spotted an angler leaving the landing and asked for his directions to park. He said follow me you can park in my spot on the street, cool!

The boat was scheduled to leave at 9pm; and begin boarding at 8:45. We were told due to a birthday celebration going on; the boat would be delayed a half hour. The new Thunderbird has been in operation here for three weeks. The boat previously was fishing Halibut and Salmon in Alaska. The interior is stunningly immaculate, as were the bunk rooms. They can seat 30. Certainly seemed brand new to me?

So we pulled away from the dock at 9:45pm. Shortly after boarding it began to rain, and the wind was up. Where did that come from, as it was not supposed to rain until Thursday and our day at the island was supposed to be fewer than ten knots of wind?

We were told our ETA to the Island of San Clemente would be sometime in the wee hours of 4am, so go ahead and sleep in as there had been no gray light bite lately.

I was up at 5:30 am and the fresh coffee had just finished brewing. It was bumpy and windy outside. About 6:45am, Captain Jeff fired up the engines and we headed down the backside of the island to begin our search for Reds, which on previous trips had been plentiful. The uphill climb against 4 to 5 foot swells was uncomfortable at best.

After a 25 minute run, the boat slowed down and we were told to get ready to drop. I was using my usual Burnt Orange 8 oz. Jax jig and a handmade Shrimp fly. Others were using 6 to twelve ounce and heavier weights; we began fishing in depths of 235 to 275 feet.

Fortunately the seas were settling down and the wind was backing off. The scope out was not bad at all. We picked away at the cod, with some Reds, Bosco’s and Chuckle heads coming aboard. On my first two drops I caught back to back small Salmon Grouper, which were donated to the common boat bin.

On a new drift I got hammered upon hitting the bottom and pulled up two nice sized Bosco’s.

I finally caught a few Reds on a double hookup, in about 300 feet of water. Around 9am we ran into a few squalls and the rain was not pleasant, but not fierce, failing to deter anyone from fishing. This continued off and on for over an hour, then the sun came out and it became T-shirt weather.

We had a great group of bow fishermen, as that is where I always fish for Rockfish. We worked together very well and there were few tangles despite about 8 to 10 of us working together. As per usual fishing alone, I made some new friends and a number of Anglers recognized me from my Bloody Deck fish reports. Fishermen are normally the easiest to become friendly with and we all enjoy sharing our fish stories together. 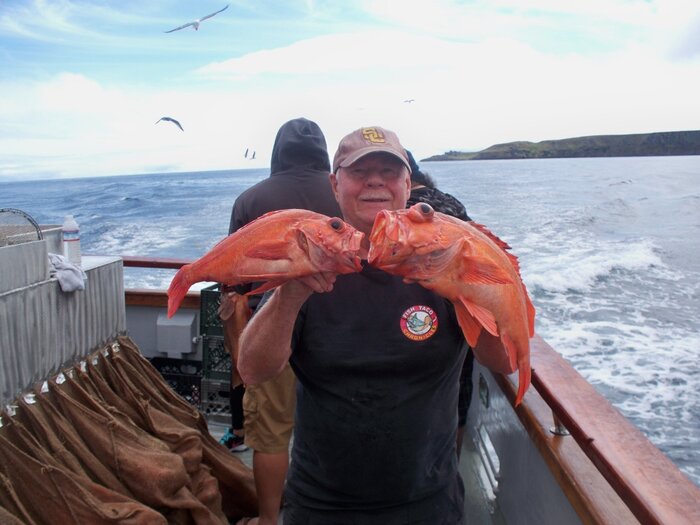 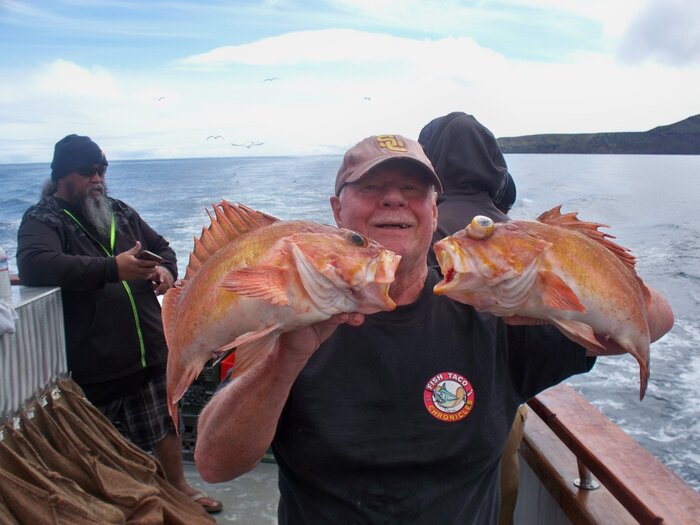 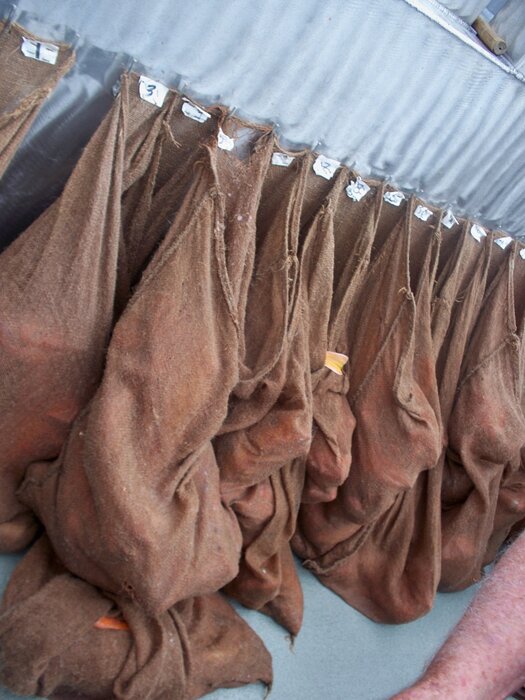 The only lady on the boat with a great double: 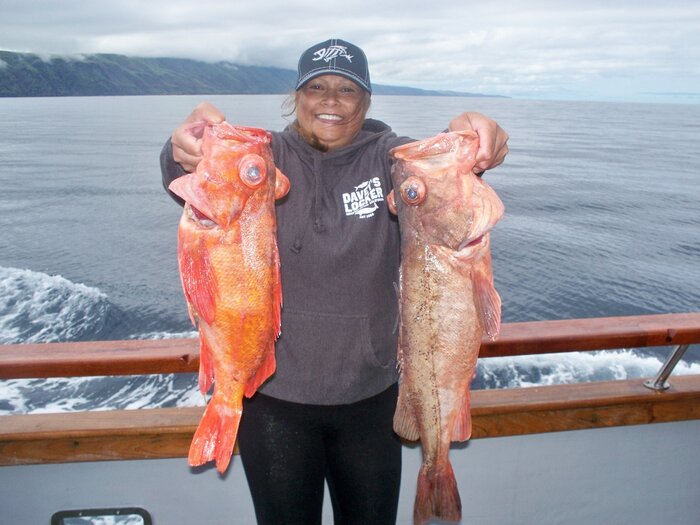 It was not wide open fishing and it seemed to alternate between excellent bites in the bow versus the stern. Sometimes each area did well and then not so well. There was no doubt that almost everyone caught their fair share of Reds, an average of at least five each.

There were not many Whitefish or Sheepshead caught. I caught two small whitefish, one was eaten by a seal and other released to grow up. I ended the day with 7 nice Reds and 3 Chuckles for my limit.

Captain Jeff was on his game and we left the island at 2pm with the ocean like a lake! The 5.5 hour ride home was as pleasant as it gets, arriving back at the dock at 7:30pm. All in all a fun trip, plenty of fish and lots of camaraderie.

The Thunderbird Bacon Cheese Burger was huge and delicious! 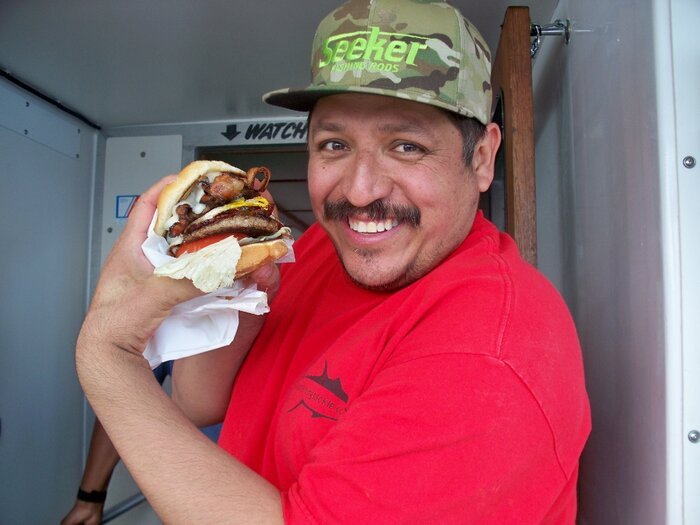 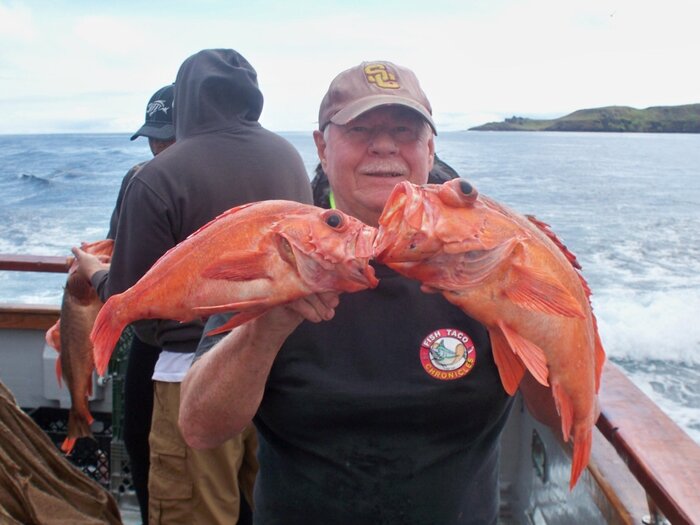 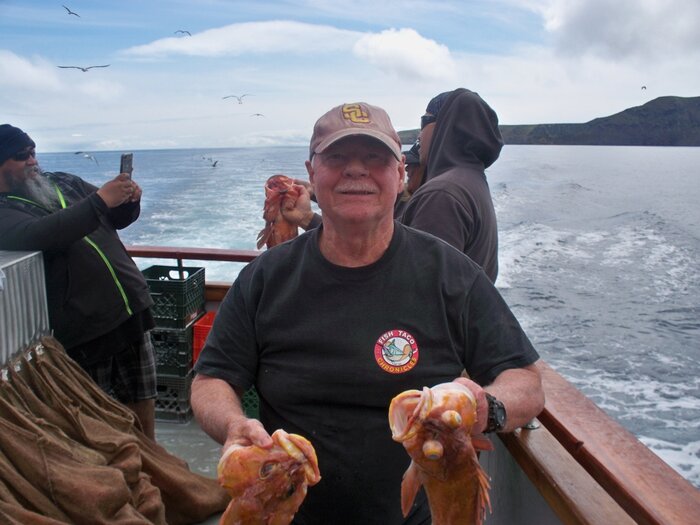 Expand signature
Thanks for your report. Hook up! Cory
Reactions: Wildman, SemperFi75, LEC and 42 others

Very nice report Cory. Sounds like the new Thunderbird is worth a try.
Reactions: Tunaslam

Nice. Great PR for the new Thunderbird too. Can't wait to go on it myself.
Reactions: Tunaslam

Thanks Cory,I have to say that burger looks as good as the reds!
I guess they look better in the grease/oil or on the grill! Thanks for report and pics. Cya Tuna Vic
Expand signature
Cya Tuna Vic
Reactions: Deepsea Warrant, Paddyman1 and Tunaslam

flyliner said:
Very nice report Cory. Sounds like the new Thunderbird is worth a try.
Click to expand...

There is little reason not to like the boat, the Captain or the crew. They will do well.
Expand signature
Thanks for your report. Hook up! Cory
Reactions: LEC and hanapah

Tuna Vic said:
Thanks Cory,I have to say that burger looks as good as the reds!
I guess they look better in the grease/oil or on the grill! Thanks for report and pics. Cya Tuna Vic
Click to expand...

Looks like a pretty good trip. A see a good batch of fish tacos in those sacks.
Reactions: Tunaslam

Paddyman1 said:
Those boat burgers always make home-grilled burgers taste awful. I always thought someone should open an on-the-water, to-go diner boat during the high season, maybe somewhere around the 267.
Click to expand...

Sounds like a plan, I'm in!
Expand signature
Thanks for your report. Hook up! Cory
A

Sorry Cory. I miss my SCI ! You’ll have to give my new zone a try on the new Farallon !
Reactions: Tunaslam

[email protected] said:
Sorry Cory. I miss my SCI ! You’ll have to give my new zone a try on the new Farallon !
Click to expand...

I can't wait until that becomes an option, soon, soon! I will fully retire sometime?
Expand signature
Thanks for your report. Hook up! Cory