Both of us were waiting out the Rains, Wind, Huge Swells and the BRRR cold. We both had an itch to go fishing that needed to be scratched. Knowing that we would be facing Full Moon conditions, very cold and dirty water and late high tides at 10:30 am, our expectations of good fishing, were nonexistent. We just needed to get out and get our lines wet.


So I went fishing Wednesday 01-23-19, with Lal on his 18’ boat the “Rubber Ducky”. We launched out of Davies in Long Beach at 6:15 am. Well before we launched, do you believe in a Jinx or Mayhem, as the Insurance companies often advertise? Well I experienced a serious case of Mayhem, as stupid me using a stool to enter the Ducky forgot to check if the stool was properly locked, not to be and when I stepped on to it, I had a hellacious fall and landed on top of the stool crushing my back. The contusion caused a pain that no one wants to experience. I thought for about 30 seconds I was crippled.


I laid there for a few minutes and Lal helped me up. I was able to stand without pain and bend over, however if I twisted to the side, I felt like someone was sticking a knife into my body. The Good Lord, despite my failures to exert caution on the stool, saved me from a broken spine, as I hit my backside below the ribs in the soft tissue area, and/or a blow to my head. I did also scrape the top of my foot on the asphalt. Things can always be worse?


Lal asked me if I wanted to cancel the trip, I told him let’s see if I can get into the Ducky and withstand the bouncing of the boat in the water. If I sit still and didn’t turn, all was well; all other movements resulted in extreme pain. Little did I know that I would have missed some of the best Bass fishing ever?


As we exited the harbor, the seas were choppy, not what we expected, with the water temps being 57.5 in the harbor, rising not a degree at our first destination, the PV Coastline. We stopped on some structure that metered well. Yet nothing wanted to bite. Lal moved us up about 300 yards on a great stone and it was game on. Every cast was a fish or at least a bite for the next 30 minutes. We caught and released some 60 Mixed Calico and Sand Bass during this time.


My first and only picture moment: 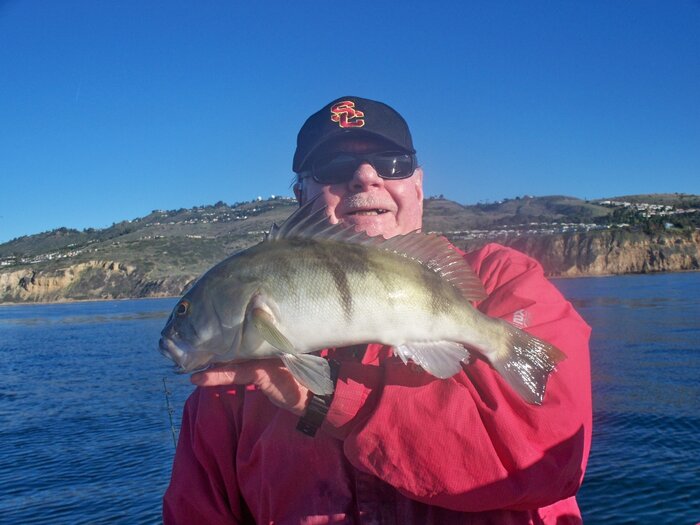 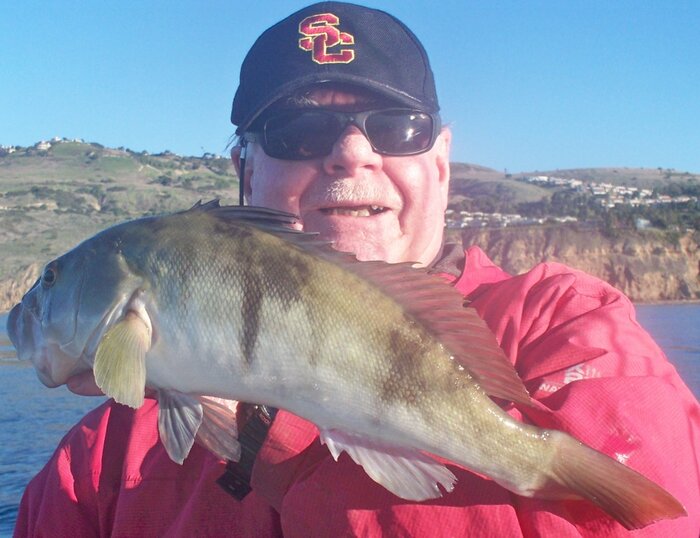 The bite died and we moved to a number of other spots, stones, structures and pipes. We scratched up a few Bass here and there. I caught the variety, a five pound Lingcod, which was the first we have caught in this area in several years, plus a Starry, a Gopher Cod, and a Whitefish, all released. It was about 45 minutes before high tide, so Lal moved us out to the Shoe.


My back was holding up in a standing and sitting position, yet the pain from most other movements was excruciating. No one can identify with this pain, unless you have experienced back pain before?


Our fishing at the Shoe was beyond outstanding. In the first 30 minutes we caught and released about 30 mixed Bass, mostly Calico Bass to 3 pounds.


It was nice to have Dr. Bob come over and introduce himself, claiming he had been having a great morning of Bass fishing, which he said started at 9am. I guess our arriving before 10am was fortunate?


Just then the meter went ballistic and the Bass fishing was beyond fantastic. We had doubles, Triples and a number of Quads, as we both used two rods, one in the rod holder and one in our hands. The fishing was so outstanding that we could barely keep up. We went through numerous plastics, as the Bass chewed through the Tails again and again.


At times we both had rods in the holder getting bit, while we were attempting to replace plastics on our second rig. It was crazy, you no sooner replaced your plastic and dropped it down and it got bit. getting bit on the fall, as your line begins to scream out from the reel on it's drop, provides a thrill that cannot be explained, when it happens for such a sustained time period, simple total ecstasy!

This continued for well over an hour and a half. We drifted a ¼ of a mile and caught fish all the way, then repeated the process. The drift was swift, but it did not matter, as you almost never made it to the bottom, before the plastic was inhaled.


We did catch other picture worthy Bass, but would you stop to take a picture when the fishing was beyond unreal? Neither did we. We have often metered huge schools of fish in this area, but so often they simply have lockjaw?


Lal stated this was our best day of fishing in at least 3 years. I concluded that it was our best ever fishing at the Shoe. Who knew, Full Moon, cold, dirty water, and me with a bad back. Crazy! We must of been close to 200 fish released before white caps arrived ay high noon and shortly thereafter we left them biting. On the trailer by 1:30 pm.


As per usual Lal and I were both using Clear Red Flake Plastics with a 1 oz. Red Lead Head, on either 15 pound, or 20 pound test line with Flouro Leaders.


Thanks Lal, another unbelievable day on the Ducky.


Currently alternating cold packs and heating pads on the back.
Last edited: Jan 24, 2019
Expand signature
Thanks for your report. Hook up! Cory
Reactions: GettinUglysSon, mhanson59hb, repo805 and 25 others

Wishing you the best with your injury.
Expand signature
"You keep fucking with me, you da one gone be sleep, fo eva!"
Reactions: Tunaslam

Use your core muscles.
Imagine you going to get slugged in the gut and tighten those muscles ready for impact!!! Hold all the time.
Squeeze that turtle head about to shoot out your ass.
Those muscles help your LBP.
Motrin,stretching and time will hopefully relieve your pain.
I have issues and have found that you need to try all until you find what helps.
Pm me if you need any referrals
I have worked in ortho/urgentcare for long time.
Get well and glad it wasn't medivac.
Great trip on the ducky.
Buddies rule.
Reactions: onehottip, mark johnsen and Tunaslam

Great read. Thanks for the report and can't wait to get out for the first 2019 trip.
Reactions: Tunaslam

Get well Cory. You of all people would not have missed that bite. Pain and all.
Reactions: Tunaslam

Cory:
Check walgreens if they have: Doloneurobion Forte
Mexican Pain Killer
really good!
google it,
it worked for my sciatic nerve pain

I hope you get well soon.
regards
Expand signature
If people concentrated on the really important things in life, there'd be a shortage of fishing poles. ~Doug Larson
Reactions: Tunaslam
P

Be careful with the back.
Ibuprofen for sure, lots of water.
After being out all day in motion, you'll probably stiffin up pretty good over night.
Back injuries are the worst.
Good luck.
Reactions: Tunaslam

I hope you get well soon.
regards
Click to expand...

I hope you get well soon.
regards
Click to expand...

Much appreciated, I do however try to avoid any pain medication when possible. Fortunately I have a very high tolerance for pain.
Expand signature
Thanks for your report. Hook up! Cory
Reactions: One_Leg

prolinegd said:
Be careful with the back.
Ibuprofen for sure, lots of water.
After being out all day in motion, you'll probably stiffin up pretty good over night.
Back injuries are the worst.
Good luck.
Click to expand...

Had a very difficult night's sleep, I hate sleeping on my back, but I could not move in either direction without severe pain. Finally up at 2:30 am stiff and sore. Back to the cold packs and heating pads. And a few Tylenol.

P.S. It really is not my back but lower backside, but the pain goes straight up my spine! We'll see.
Expand signature
Thanks for your report. Hook up! Cory

Hey Cory, sorry to hear you fell and hurt yourself, back pain is a bitch. Tylenol is a pain reliever and does nothing for the inflammation. Switch to Ibuprofen (Motrin), it is an anti-inflammitory and pain reliever. You should consider getting an x-ray or two just in case.
Expand signature
Steve

I agree with Steve, go get an x-ray Cory! You may have injured your tail bone. Seek professional medical attention at any rate! Tough hombre right there...
Reactions: Tunaslam

Thanks for the Great report Cory!
Sorry to hear you hurt your back,
I hope you feel better soon!
Reactions: Tunaslam

Thanks for a Great report as always minus the fall. Hope you recover quick.
Expand signature
CATCH YA LATER <*))>><
Reactions: Tunaslam

Hey Corey, great report and even better fishing , sorry to hear about your fall. Try rolling up and down the wall with 2 tennis balls taped together, with one tennis ball on each side of your spine as you do squats . This will help realign your spine and ease the muscle tension. Good luck
Reactions: Tunaslam

Ha,I knew it was gonna be good when I saw the post title. First of all very sorry for that scary start to the morning,at 66yrs old now,falling is kind of a big concern,so glad you were injured even more severely. It’s always when we never expect it,when someone falls and says,man I knew that was gonna happen! I say no if you knew that was gonna happen you’da been more careful,my wife fell a couple of years ago,broke a toe,two ribs,shattered her shoulder (needed to be replaced) and a concussion,she’s is totally fine now but that paranoia of falling haunts every day,glad your ok Brother,also stoked on the great day you and Lal had,thanks Cory!
Expand signature
Cya Tuna Vic
Reactions: Tunaslam

!! Get well sir. Never thought one would have to wear a parachute before going on board a boat!!!

I've had my share of falls while getting on the boat. They have all happened at home. I live on a steep hill and getting on the boat, using the trailer fenders requires some death-defying feats of balancing prowess. I have fallen and laid out there alone for what seemed hours until I could slowly put the eggshell back together. Tough getting old.

Days like that make all the sow days worth it. Hope you have a speedy recovery.
Reactions: Tunaslam

Way to gut it out, Cory. Hope it’s not a serious injury.
Reactions: Tunaslam