OMG it was cold this morning, 41 degrees, us native Californians have too thin a blood to enjoy the big freeze? Both Lal and I bundled up with heavy winter clothing, before launching the Rubber Ducky, Thur. 12-19-19 out of Davies in Long Beach at 6:45 am. We made it a bit later than normal, hoping for Father Sun to create some warmth in the wee hours shining on us to prevent total discomfort, during our ride out to the fishing grounds.

Ok so when we launched, it was up to 43 degrees, still frigid in my opinion. The skies were crystal clear, the water temps 57.9 degrees, and the seas had a mild lump, while Mother Wind behaved herself today, never exceeding 8 knots, and settled down to 5 or less all the way to after 1pm. The swell was indeed up to 4+ feet with an occasional bigger boy cruising by, however the distance between swells very reasonable.

When Lal kicked it up to 20 knots I thought to myself, are we crazy, my teeth were chattering, and my no socks Croc’s, which I regret wearing, forced my toes to shrink and burn with cold.

Gosh it felt so good to stop! The wind chills factor no fun, while traveling. As per usual the first spot at the Shoe held fish, at least on the meter, and we scratched out a few Calico Bass. We moved from spot to spot, catching a few fish on most, with an occasional flurry of good bites. By 9:30 am we had about 35 Bass caught and released, 90% Calico Bass. In fact we had caught 20+ Calico Bass before catching our first Sand Bass, quite unusual. Most fish were in the 1.5 to 2 pound range, with both of us catching several Calico Bass in the 2-2.5 pound range. Here is one I caught: 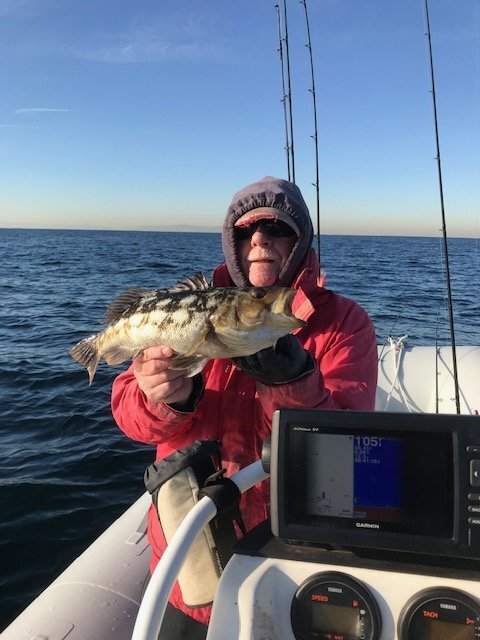 Lal decided with the seas so calm, and this bite reaching a screeching halt, we would check out PV. It was about a 15-20 minute run, yet much more comfortable than traveling in the early cold. What a fantastic decision on his part. There was good current everywhere we went and the Bass were on the chew. 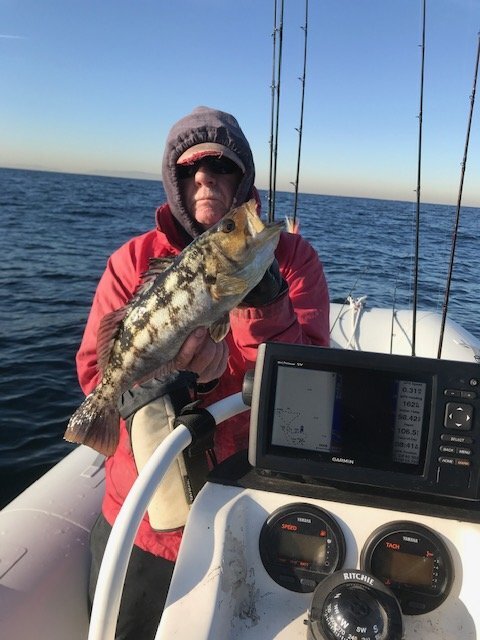 ​
We made drift over drift on numerous spots, yielding about a 60/40 mix of Calico and Sand Bass. The fun part was the majority of our bites came on the drop. Anyone who fishes plastic knows the thrill of on the drop; your line suddenly starts screaming out. You put the reel in gear and wind like hell, with the line coming tight and hookup, fresh one! We most likely had some 25 doubles today, wow! Simply was sensational local fishing.

Lal with a nice 2.5+ Calico Bass, as we both caught a number of this size Bass. Unfortunately nothing bigger. 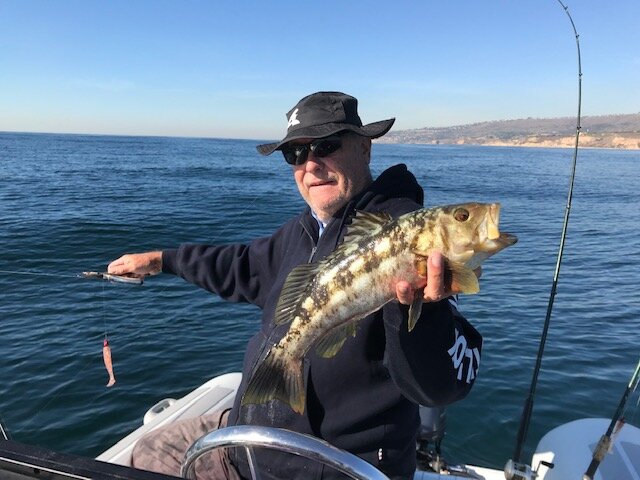 ​
Notice the seas at about high noon are calmer than earlier, making it such an enjoyable day.

We released some 40-50 Bass in PV, wow? Water temps reached a high of 58.9. It was a 75+ day of releasing Bass, what a thrill, and unexpected this time of year, especially considering other Bass reports lately. Current matters! We got lucky.

We called it at a little after 1pm. Never saw a white cap today; we were on the trailer at 2pm, with winds picking up in the harbor, good timing.

Well Lal, another incredible day on the Ducky! Thanks so much, glad to be able to shed the heavy winter clothing at home.

Hook up! Cory
Last edited: Dec 19, 2019
Toggle signature
Thanks for your report. Hook up! Cory
Reactions: ElLoboDelMar, KINGSIZE, fishforfun2 and 27 others
Upvote 0

nice to hear they are still around in pv.
Toggle signature
-steve
Reactions: Tunaslam
Upvote 0

Wasting away at work

That was a really fun day for December. I got a short ling and a nice copper for Cory,s dinner, the only rockfish that we got. Bait was still around in large schools plus lots of mackeral . Water was clear green in most spots. Shallow water was still a muddy color . Hope to get in one more trip in between storms next week !!!
Toggle signature
Tailman
Reactions: Tunaslam
Upvote 0

Thanks for the great report guys. Living vicariously for now, I can feel those on the drop bites. Happy Holidays
Reactions: Tunaslam
Upvote 0

Nice haul. Next time, bring along some, uh, "anti-freeze".

Cory, you look like you're waiting for it to snow!
Nice looking/size Calicos!
Great pictures!
You need some fresh BBQ'd Penguin from the
Rotisserie above, that will set you straight.
Are you always ONLY fishing with the KMan special?
Thank you for your report!
Toggle signature
Luck is where planning meets opportunity.
Reactions: Tunaslam
Upvote 0

Glad you got some. Too cold for me.
Reactions: Tunaslam
Upvote 0

If only there was a place to put a heater on the Ducky?
Toggle signature
Thanks for your report. Hook up! Cory
Upvote 0

FloMar said:
Cory, you look like you're waiting for it to snow!
Nice looking/size Calicos!
Great pictures!
You need some fresh BBQ'd Penguin from the
Rotisserie above, that will set you straight.
Are you always ONLY fishing with the KMan special?
Thank you for your report!
Click to expand...

That's all we use for Bass fishing, we both brought Colt Snipers and other lures for deep water fishing, when necessary. Although they only collected sea spray on this trip, no deep water drops. The Bass were mostly found in 80 to 105 feet.
All the best John and Merry Christmas.
Toggle signature
Thanks for your report. Hook up! Cory
Reactions: FloMar
Upvote 0
Show hidden low quality content
You must log in or register to reply here.