The Origin of my handle "Tunaslam" which I acquired way back in August of 1995.

I know this belongs on the Offshore Board, but not much going on there right now, so thought this would get more attention here? We all can use a little entertainment right now. 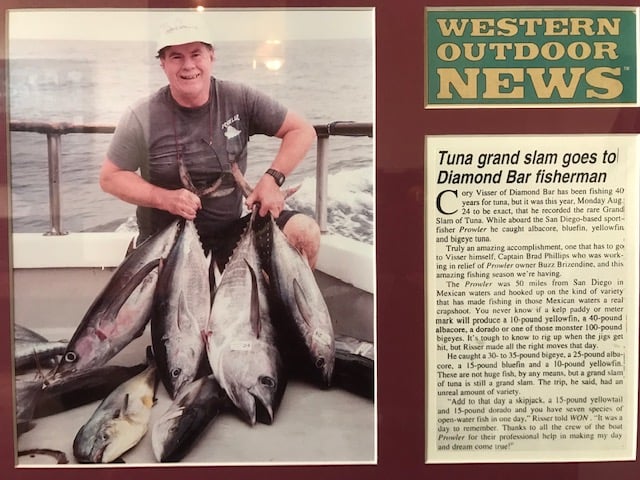 Someone told me about the internet and fishing message board’s evolution in the early 1990’s, as the web was growing by leaps and bounds on all kinds of social media subjects. I found out this was where you could interact with other fishermen, both with Sport Boat Fishermen and uniquely Private Boaters. Also we were able to get more current information on what was biting and how well and in many cases, where they were biting. Remember WON, “Western Outdoor News” I mean WON =Week old news! A great magazine, but the exciting info was yes, nearly a week old.

IE: I’m not talking about giving up specific GPS coordinates, which we all covet, but general areas offshore, or islands. Unfortunately this soon became a possessive passion. I know you don’t want to give up your favorite hard bottom spots for Bass and Rockfish, which makes sense! However knowing that Yellowtail or WSB were biting at such and such island is valuable for you, if you are going and helping the next guy who fishes the following day.

Sharing is a two way street. You win from others info and others win from you providing info. Most good bites don’t last long, and holding back info does not benefit you much if you won’t be fishing again for a while? But when you do get back out, how sweet it is to have knowledge that they are still biting and benefiting from any other vital location info available, is a blessing, especially offshore! Unless you are going fishing the very next day, and don’t want to fight a crowd, I understand. However, fish move, and very rapidly, those fish are highly unlikely to be there next week! The offshore ocean is a very big place and fish can move 30 miles overnight. So I simply can’t understand protecting GPS numbers in an open ocean? Why not provide at least one good starting point for tomorrow’s offshore crowd? I know Fish Dope would not agree, sorry.

I can’t tell you how many times myself and crews were given on the water GPS numbers which saved our day. I also know how many times I threw out numbers on channel 72 after we had slammed the fish. I know there are idiots out there giving off false numbers, so beware. Yet when I hollered out this was “Tunaslam” giving out numbers, it was money, know your source.

Not being shy, and always enjoying meeting new fisherman, I began my journey as a Ho. I also got a tremendous thrill out of writing a report and sharing our adventures, which opened up new opportunities to fish with more folks.

OK so I digressed, so let’s get to the meat of the report.

Having met Buzz Brizendine, owner of the Sport Boat Prowler, shortly after he purchased it, I fished with him for some 25 years. On this particular day the Prowler was skippered by Brad (The Viper) Phillips, the relief skipper, until he jointly purchased the First String sometime later.

I was in the wheelhouse when Brad set the course for the 1010 offshore bank. Brad had a nose for where they would bite like no other Captain I had ever met; granted Buzz was also outstanding in locating biting fish. We arrived in grey light and began trolling. Maybe 20 minutes later it was the thrill of ZZZZZZZZZZ, and holler of Hookup by the trollers that set everyone in motion.

I tossed out a bait and it was “Fresh One” almost instantly! I landed a 15-20 pound Yellowfin Tuna on my 25 pound outfit in a few minutes. There hookups everywhere, so I grabbed my 40 pound outfit and put the wood to them. In less than an hour or a little over I caught my limit.. I did hook and hand for a while, and with too many fish going at a time, began catching a few more to give out to those unlucky anglers who at the end of the day were short of limits. Besides catching Yellowfin Tuna, I also caught both a Dorado and Yellowtail as we passed a kelp Paddy during our drift. We also caught numerous Skipjack.

The Captain always loves to send everyone home with limits when possible.

So reaching boat limits by 9am, Brad announced that he knew of a spot of Albacore some 30 miles away. So he set a course for this area, given we had another five hours of fishing time left. Most Captains would have simply goofed around, maybe looking for kelp paddies until time to call it a day. Brad was a fanatic fisherman and adding counts of Albacore to the count would only draw more people to book the Prowler for future trips.

Sure enough we found the colder water, Albacore rarely stay in water over 68, and we had been fishing 72 degree water for the Yellowfin Tuna. We had one jig strike and caught a total of 13 Albacore, all in the 25-30 pound range. I caught two Albacore and the only Bluefin Tuna on the boat. Wow I now had a ¾ day Tuna Slam, not including the many Skipjack I caught and released, 4 species of Tuna, plus a Yellowtail and a Dorado, totally unreal.

What a treat and no Albacore had been caught for several weeks in the fleet, because they were like 80 miles from the point, near the Airplane Bank.

Later in the day, around 7pm, I was up in the wheel house talking with Brad, and we discussed the remote possibility of landing a Bigeye Tuna, making it a true Grandslam. There was a change of trolling rotations and I was up. I put out my trusty plain cedar plug, on 80 lb. on a Daiwa 30II speed. 45 seconds later I was absolutely hammered, thinking I had a slug albacore on, as several others were getting schooled on bigger fish. I experienced about a 10 minute fight, long for 80 pound, but this was a big fish, and up comes a good size tuna, at first I thought Bluefin, but no it was a Bigeye. I couldn't believe it, as Brad stuck the 42lb. fish and lifted it aboard. They checked the liver to be sure, and it was indeed a Bigeye. What a day, seven different pelagic fish in one day offshore. So ended the most incredible day of offshore fishing ever experienced by me.

Toggle signature
Thanks for your report. Hook up! Cory
Reactions: Mark C., kurtisw, Arima-bob and 54 others
Upvote 0
T

Great read as always. Thanks for the post.
Reactions: Tunahead and Tunaslam
Upvote 0

No it was a one day trip 10pm to 9pm the next evening, 23 hours in this case, a bit longer than most, but the Captain ran some 80 miles out. 80+80 = 16 hours of travel time alone.
Toggle signature
Thanks for your report. Hook up! Cory
Reactions: Tunahead
Upvote 0
T

Cool story. Inspirational. Let’s all hope for a good season and a focus on preservation. Best luck to all.
Reactions: Tunahead and Tunaslam
Upvote 0
D

Always enjoy your posts Corey!! It is even better knowing that you've weathered the "storm" of illness in your family!! Tight lines and good health with lots of fish mixed in to you and yours, once this Covid 19 thing resolves!! Doug.
Reactions: Tunahead and Tunaslam
Upvote 0
P

diseasedscrotum said:
Always enjoy your posts Corey!! It is even better knowing that you've weathered the "storm" of illness in your family!! Tight lines and good health with lots of fish mixed in to you and yours, once this Covid 19 thing resolves!! Doug.
Click to expand...

Back at ya! We are all drooling to be released from our chains!
Toggle signature
Thanks for your report. Hook up! Cory
Reactions: Tunahead
Upvote 0

Cool story and a day for you to remember. Thanks for sharing.
Reactions: Tunaslam
Upvote 0

Quite a day there.
Reactions: Tunaslam
Upvote 0

Thanks for a good story.
Reactions: Tunaslam
Upvote 0
T

Glad you're well and your wife is progressing.
Your reports are one of the main reasons I and many more read BD posts.
I always get happy with a new post.
That was quite a day....
Reactions: Tom123
Upvote 0

Awesome read as always. I got 3/4 of a tuna slam back in the 90’s. Missed the bigeye but was still an absolutely awesome day

Thanks for sharing
Reactions: Tunahead
Upvote 0

Is that all you got to say?
Toggle signature

SO that's the deal...what a read. I miss fishing with you, always blaming me for too much wind when the forecast said less.

YOU are the wind magnet

I thought by now Denny's on Rosecrans would have a mega meal Tunaslam Breakfast on the menu. Hope you are well.
We were on a WON cover w/Bluefin on Condor years ago too. Where have all the fun years gone?

Enough typing with a right thumb/arm soft cast on after surgery the 8th. Hope to share a rail and a tale or two with you again soon!
Last edited: Jul 21, 2021
Upvote 0
Show hidden low quality content
You must log in or register to reply here.