Fishing Thursday, 12-28-17 with Dave Robinson on his 28' Farallon, “Hooked” with crew Kevin, Bob and Ron. Our destination being San Clemente Island. We left Dave’s slip in Newport Beach at 5:05 am. We cleared the harbor by 5:25 am. Grey light was still 50 minutes away and with foggy conditions, we slowly made our way out in the pitch black.

The seas were reasonably calm, however there was a considerable lump, with leftover impact from northern wind the previous evening. A few miles before we reached the east end of Catalina, the skies opened up and you could see a very clear San Clemente Island and grease seas all ahead of us.

Dave set a course for the West End where we were to begin fishing around 8:00 am. The water temps had dropped from last week down from 64 to 61.5, yet remained a crystal clear blue, with virtually no current for the morning. Mother wind never made an appearance.

We began fishing in about 280 feet and caught a mix of Coppers, Santa Marias, Starries, Bank Perch, Whitefish and Salmon Grouper. It was a slow pick most of the morning as we tried various depths from 240 to over 300. By mid-morning Dave had hit spots all the way around back to the Dunes. He then decided to move back the nine. He stopped in an area that shallower than previously fished at 210 feet. The meter was lit up and the fish became more prevalent.

I landed a Red and Whitefish Combo: 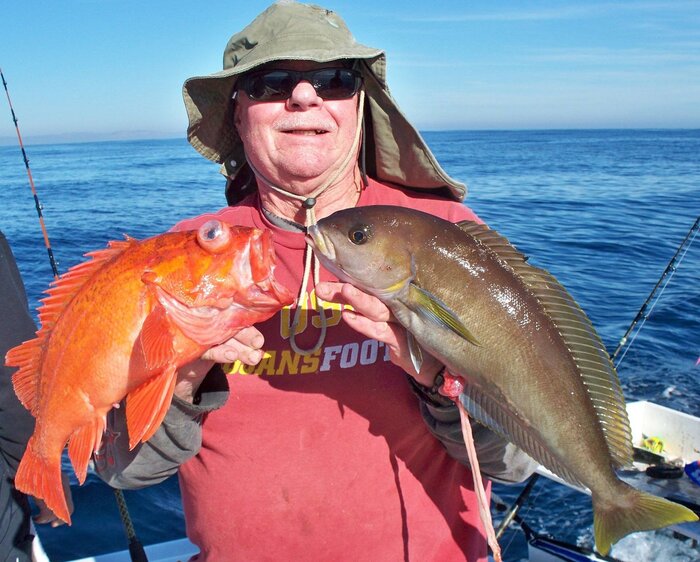 Kevin with a nice Copper. 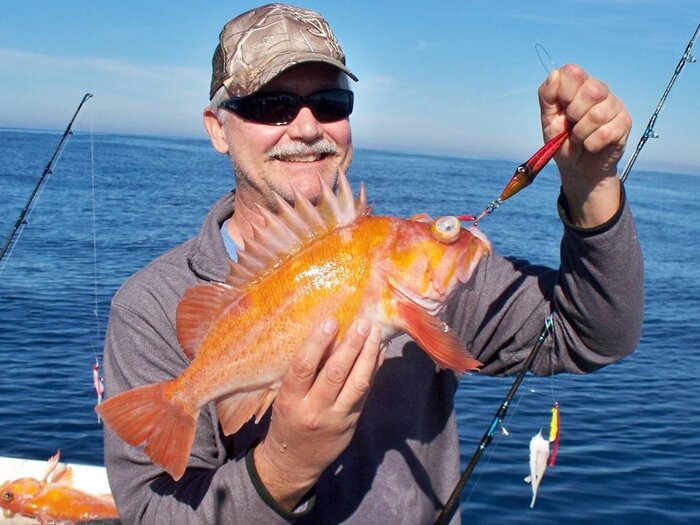 Myself, Ron and Bob: 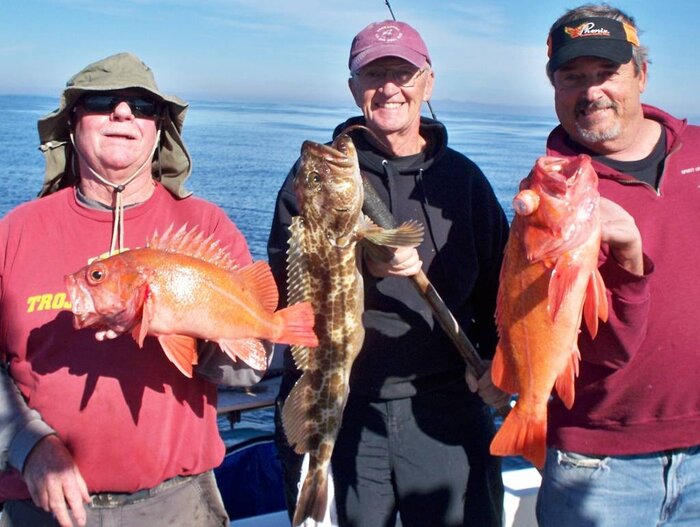 The five of us used a variety of Tackle, Lucanus lures or knock offs, Swish jigs with shrimp flies, Jax jigs from 6 oz. to 10 oz. I used my usual Jax Jig and shrimp fly combo and switched back and forth to a knockoff Lusanous and shrimp fly. My Mo Jo from last week didn’t carry over, and my Jax jig was really letting me down today. I believe it was to no water movement. The 6 oz. Jax Jigs were getting bit far better than my 8 oz. rig.

Coppers were more prevalent than Reds, we caught about 10 Reds, I did manage to catch 4 Reds, but only two Coppers, where most of the others caught far more Coppers and we probably ended the day with 20+. The rest of our fish consisted of Whitefish, Sheephead, Johnny Bass, and other assorted Rockfish.

Ron caught our only Lingcod, about 7 pounds. 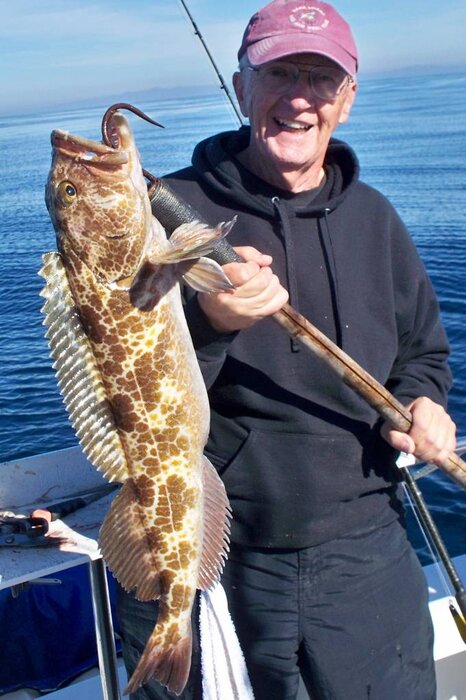 At 2:30 Dave called it a day, and the wind was MIA, and provided an extremely pleasant ride home.

Thanks again Dave, another splendid trip, great fishing with you again Bob, Kevin and Ron, see you all next year.

Cory
Toggle signature
Thanks for your report. Hook up! Cory
Reactions: Jiggermeister, sacman, slayrider and 16 others
Upvote 0

Good times!
Toggle signature
When I was your age, Pluto was a planet.
Reactions: Tunaslam
Upvote 0

Atta Boyz!
Toggle signature
"When beholding the tranquil beauty and brilliancy of the oceans skin, one forgets the tiger heart that pants beneath it; and would not willingly remember that this velvet paw but conceals a remorseless fang." H.M.
Reactions: Tunaslam
Upvote 0

Wishing you a fantastic 2018 fishing season

you guys have it dialed in at clemente, good job
Reactions: Tunaslam
Upvote 0

muletrain said:
My 2018 New Years resolution is to fish half as often as you do

Wishing you a fantastic 2018 fishing season

Hope you achieve your goal, all the best!
Toggle signature
Thanks for your report. Hook up! Cory
Upvote 0
Show hidden low quality content
You must log in or register to reply here.