So we had to cancel our planned Bluefin Tuna trip on the Jugular for Saturday afternoon/ Sunday due to the awful weather forecast offshore. 19-25 knot winds with 10 foot swells were not something we wished to challenge.


The weather forecast locally was okay out of Long Beach for Sunday, so I went fishing Sunday 10-07-18, with Lal on his 18’ boat the “Rubber Ducky”. We launched out of Davies in Long Beach at 6:00 am. The skies were mostly clear, the wind was calm, and as we exited the harbor, the seas were a bit lumpy.


We headed towards the Shoe, water temps were 68 degrees, and it was a clear blue color. The marks on the meter were exceptional, yet the fish were reluctant to bite. We scratched up a few Calico Bass. We stopped on stone after stone and a few hard bottom spots. It remained a scratchy bite for several hours, a bass here and a bass there. There was virtually no current and little drift. Yet we managed to catch and release about 25 Bass to 3 pounds, 90% Calico Bass.


Lal decided to move on to the Palo Verdes Coast. The area was alive with birds and puddling bait. We tried a few spots and the various pipes up there. The meter showed fish, but they were not hungry. We moved on to some favorite hard bottom spots. The meter continued to show lots of fish. This time it did not lie.


We had a WFO bite for a solid 45 minutes, drifting over ¼ mile. We had numerous doubles and a few triples, as Roddy performed for both of us more than normal. Roddy= a rod in the rod holder with the swimbait on the bottom getting hammered.


We both used mostly 4 inch Red Flake Plastics by Kurt on 1 oz. lead heads by Kurt. It was some of the best Bass fishing we have experienced in this area in several years. Conditions were extraordinary. It was a slow drift uphill and in, with great current. We re-positioned several times and the bass kept on biting although not at a WFO speed as experienced in our first drift.


At high noon the wind came up a little and with a wild current the scope out became bad. The drift also changed and the bite died. Oh well that’s fishing. We picked the right time and the right place. We released over 75+ mixed Bass; Lal said maybe 90, to 3.5 pounds. We both caught lots of Bass to 3 pounds and this was our only 3.5 pounder we thought worthy of a picture: 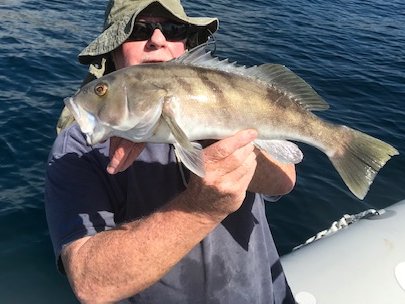 Thanks Lal, it was an incredible day on the Ducky and not expected considering the weather. You still have the magic touch Lal.

Hook up! Cory
Expand signature
Thanks for your report. Hook up! Cory
Reactions: 998R, fishymeister, Zika and 22 others

Dead sticking Roddy eh? I like that technique.
Reactions: Tunaslam

i snag for food

Do you anchor up in the spots ever or strictly drift. Still new at the inshore and trying to sort out the best practice.
Expand signature
Many men go fishing all of their lives without knowing that it is not fish they are after." ~ Henry David Thoreau
Reactions: Tunaslam
S

Great fish report Cory. You are like a fish magnet.
Reactions: Tunaslam

Always enjoy your reports Cory. Thank you.
Expand signature
From a Champ to a Chump in just one bump.
Reactions: Tunaslam

Woodeneye said:
Do you anchor up in the spots ever or strictly drift. Still new at the inshore and trying to sort out the best practice.
Click to expand...

All drifting! Plastic fishing rarely works well on the anchor, need to cover lots of area to catch fish. Need movement and current for the plastic's to work effectively.
Expand signature
Thanks for your report. Hook up! Cory
Reactions: shinbob, Woodeneye and Workplacesafety

You guys always hammer the fish, Im jealous every time i read a report from the ducky!
Reactions: Tunaslam

Thanks Cory. I got a WSB on my "Roddy" outfit at the wall the other day, close to legal, good clean release.There's been some thrasher sharks in there lately, got smoked by one of those too.
Reactions: Tunaslam

Workplacesafety said:
Thanks Cory. I got a WSB on my "Roddy" outfit at the wall the other day, close to legal, good clean release.There's been some thrasher sharks in there lately, got smoked by one of those too.
Click to expand...

Yeah I forgot to mention in my post that I lost a plastic and lead head to a Mako at the Shoe, also we saw what looked to be several Threshers crashing on the surface at PV.
Expand signature
Thanks for your report. Hook up! Cory
Reactions: Workplacesafety

Better conditions it seems than Saturday.
Sucked in my little boat out by platform Esther.
Skunked in ugly mixed swell.
Glad you got sum.
Reactions: Tunaslam, shinbob and octans

We were going to head out of Newport for a change, only to find the launch closed for the month due to Oktoberfest.

Oh well, went home and had the easiest clean up and put away of the boat ever. Done in 15 minutes, caught all of Let's Talk Hook Up and some great NFL games.
Expand signature
@flytieoc on Instagram
Reactions: Tunaslam

we got skunked as well on the shoe 150 and izors ugly seas on Saturday
and we tried hard until 2 PM metering a bunch but lock jaws!
Expand signature
If people concentrated on the really important things in life, there'd be a shortage of fishing poles. ~Doug Larson
Reactions: Tunaslam and shinbob

Nice job! Like others, I was out in those same areas (horseshoe, PV) on Friday 10/5 and couldn't buy a bite. Could meter plenty, but only a very few dink Calicos would actually commit. No shortage of Macks though.
Reactions: octans and Tunaslam

Your story highlights something most of us HATE to do: Keep movin till you find em!!!!! Why is it so tough to move???!!!!!! I guess it's a lot more fun to cast and retrieve with the hope of getting bit, than to start that motor up and keep lookin..... I guess all fishermen suffer from this virus.

Way to stroke em up gentlemen.
Reactions: ScaleyOne and Tunaslam

octans said:
we got skunked as well on the shoe 150 and izors ugly seas on Saturday
and we tried hard until 2 PM metering a bunch but lock jaws!
Click to expand...

Amazing how when conditions change for the better, the fish can turn on. Although we wish we knew when and where to fish all the time, it still remains hit and miss. Last week's great bite is this week's lockjaw? That's fishing, with Lal having some 50+ different stones, rocks, hard bottom to look at eventually you find some hungry fish on one or more of them. It still remains that having current and in the right direction can make all the difference in success or failure, no current is generally bad!
Expand signature
Thanks for your report. Hook up! Cory
Reactions: octans, ScaleyOne and KID CREOLE

Excellent work Cory and Lal
Guys Lal and Cory are and have been successful for a long time due to them understanding how to read conditions. Clean water vs dirty, warm vs cold, current direction, moon phase and time of year
For me personally, the fishing for local bass had been incredible. I too have changed my style for targeting bass. It seems that calicos are getting boat shy just like white sea bass can be.
Focus on the conditions and note the patterns
Expand signature
www.yayacalls.com
Reactions: Tunaslam, octans and ScaleyOne
Show hidden low quality content
You must log in or register to reply here.
Share:
Facebook Twitter Reddit Pinterest Tumblr WhatsApp Email Link