I left my home in Diamond Bar at 6:00 pm and headed south to Point Loma in San Diego, arriving at 7:50 pm. There was light traffic most of the way. The Parking area had heavy activity, I got lucky and there was a spot open, yee ha!

The boat was scheduled to leave at 10pm; we boarded around 8:30 pm. I was able to select a bunk on the Port side, middle, very happy.

Captain Mike explained that the last few days had been extremely slow, partially due to poor weather conditions. He had decided that a trip to the Tanner Bank, weather permitting was the game plan, as the schools of tuna were plentiful, but unwilling to eat.

We left the dock with 18 excited anglers at a few minutes before 9. We stopped for bait and spent a full hour carefully loading very healthy Sardines. We cleared the Point around 10:15 with a long ride ahead to our starting area. The seas were quite lumpy, with an E-Ticket ride due west out to the fishing grounds, lots of rock and rolling.

I was up at 6:15 am with the smell of fresh coffee brewing, drawing me into the galley. It was a little bit breezy out, but no whitecaps and moderate swells of 4-5 feet. As good as forecasted, maybe 7 to 9 knot winds, yet the swells made sitting in the trough uncomfortable?

Captain Mike stated we would arrive in the area around 8am. When we arrived, I counted 9 other boats already there? It didn’t take long to find a school of tuna, and chum was thrown, but no boils. No action and we moved on. We did this several times before a hookup was shouted out. The fish meter displayed lots of fish underneath us and the kite went out. It was only a few minutes before a huge splash announced the total inhalation of the flying fish used as bait.

The captain announced the tag team responsible for fighting the big Tuna. It was 6, 12, 11, and 13. I was number 12. After number 6 tired, I took over. Yikes, this was out of my league, but I gave it all I could. Tried lifting the rod, but no luck, depended upon the swells to gain a few yards of line. I could tell this was a very large Tuna. During my turn I caught the tuna slacking off and gained some good line. After about ten minutes, I yelled uncle and passed the rod on.

What a spectacular honor to participate on this team to eventually land a 292-pound Bluefin Tuna, after an hour fight, so close to a super cow? Which is 300 lbs. What a thrill to take pictures with such a beast. Can’t believe a single angler can actually land one on their own? The four of us took turns and all of us found the beast to be worthy. The last ten minutes were a thrill a minute, as this monster did not want to give up. Brought it to the surface a bunch of times, we all went wow, so huge. Finally with the help of an excellent crew, the beast succumbed to the constant pressure.

We again went looking, it was not long to find a new school, but getting them to bite, not likely? We stopped on a good spot of fish, with a couple fish hooked on sinker and lures. None were landed. The kite went out and was almost immediately bit. Another huge Tuna. Shortly later another kite fish was hooked. We had two going. Yet none of us normal anglers could encourage a bite, no matter what we tried.

The first kite fish was landed after nearly an hour fight, big but not close to the beast! The second kite fish was fought valiantly for well over an hour. At color it was determined to be as big or bigger than the 292 pounder. Then the 100-pound test broke. The darn tuna had bit through the line.

It was high noon and quiet, so we ran into the shallows and metered lots of Yellowtail and some Tuna. No Yellowtail were caught, but some bonito and lots of Rockfish, Whitefish and Sheepshead came aboard. The kite went out, which surprised me, yet it was not long before a big tuna crashed on the bait. Our third cow of the day was landed 45 minutes later.

We continued to look, stop, throw bait and yield nothing until sundown. We had three kite fish on board and nothing else to speak of. Then the usual happened, the big school we stopped on came to the surface and started boiling. I grabbed my 40-pound outfit and selected a great Sardine for bait, belly hooked him and tossed him out into the chum. I was bit almost instantly. Game on. We now had about 8-10 fish going.

I landed a 25-pound Yellowfin Tuna, surprise! The only Yellowfin caught; the rest of the fish being caught were Bluefin in the 25–35-pound range. I was tired but managed to pin on another bait and was bit about a minute into the process. A good fight and landed a 30+ pound Bluefin. Wow, what a great way to finish the trip.

We spent another hour or more looking, with no results and punched the boat for home, we were 110 miles from the Point.

Everyone was offered for a service charge of $25 to share in the bountiful plunder of three cows. I had plenty and passed, had I caught nothing I would have jumped all over this deal. I simple would have paid $25 to give the Tuna away, as I had plenty and no freezer space. And Tuna do not freeze well. 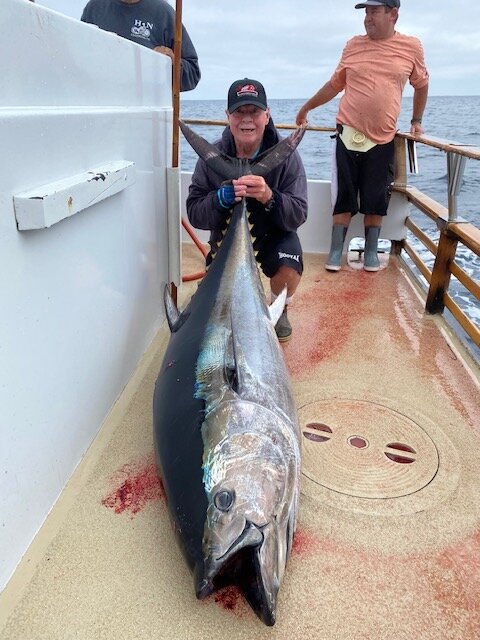 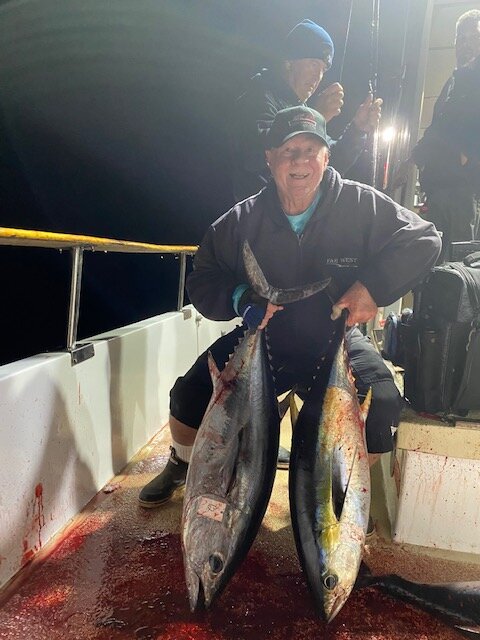 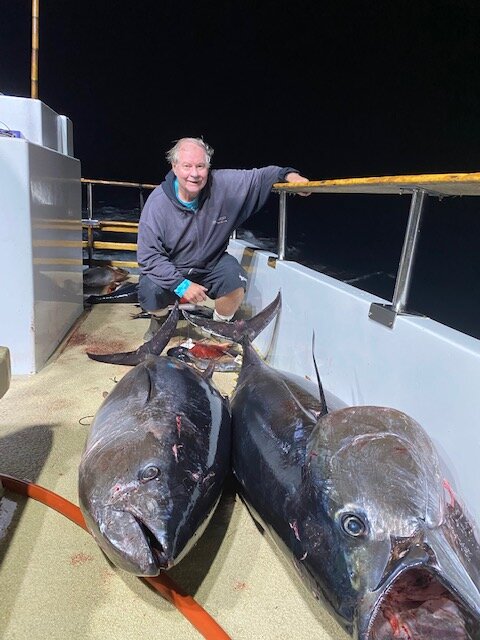 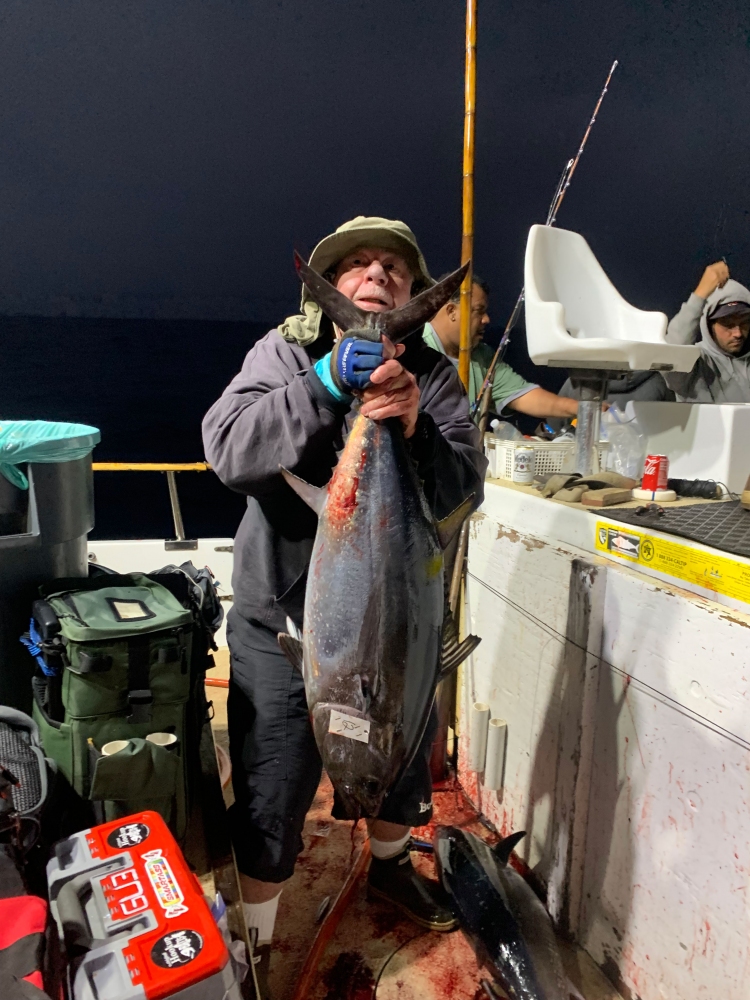 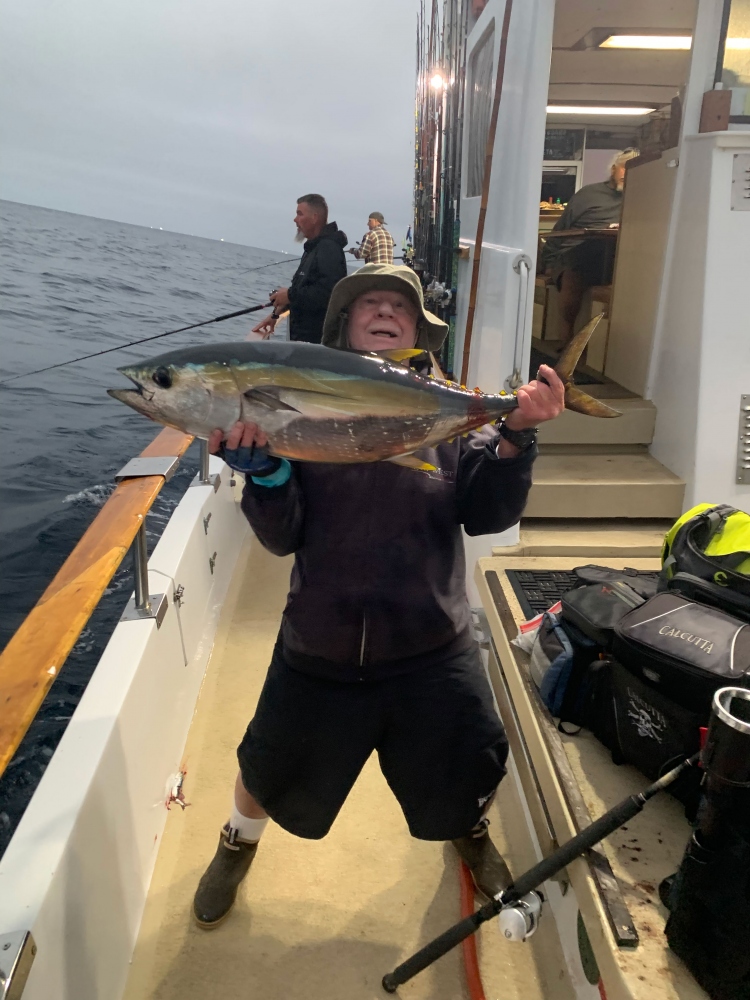 Last edited: Sep 15, 2021
Toggle signature
Thanks for your report. Hook up! Cory
Reactions: MikesOcean, Ahkhuang, Donkey Nick and 97 others
Upvote 6

Great report thank you glad you got some nice fish!
Toggle signature
Work to live and Live to fish!

That has always been a fishy boat for years.
Reactions: Tuna Dreamer, Tunaslam, locvetter and 2 others
Upvote 0

Great memories for sure Cory!!
Glad you got out and got your share.
Great report and pics as always.

Glad you got to participate in that experience, and to be humble on top of that and just enjoy the 2 Tuna you landed and have more fish for the others to share. A definition of a sport fisherman right here
Reactions: Tuna Dreamer, Jeff Hannah, Tunaslam and 3 others
Upvote 0

Great report.
I fished DiawaPacific 2 years ago.
Had a good trip.
That is one big fish!
Reactions: Tuna Dreamer, Tunaslam and woodfish330
Upvote 0
W

So who gets the kite fish, The boat?? Then you basically pay a filet fee and they will divide it up with who ever pays up???? That sounds like some shit the "Constitution" would pull.
Last edited: Sep 14, 2021
Reactions: Aravon, pacificscout, Tuna Dreamer and 7 others
Upvote 0

Looks like a very high point in a fishing career punctuated by high points, Cory!
Thanks for the great report - and congratulations on an epic day!
Reactions: Tuna Dreamer, Tunaslam, Tunahead and 1 other person
Upvote 0

Great write up, as usual. Congrats on a successful trip!
Reactions: Tunaslam and Tunahead
Upvote 0

Thanks for the report, Cory!
Toggle signature
JC
Reactions: Tunaslam and Tunahead
Upvote 0

Great report Cory. I was on the boat with you and was honored to share the rail with you!
Last edited: Sep 14, 2021
Reactions: pacificscout, Noah & Scoot, woodfish330 and 2 others
Upvote 0

Way to go Cory!
Thanks for the report!
Reactions: Tunaslam and Tunahead
Upvote 0

Staying healthy, thank the good Lord!
Toggle signature
Thanks for your report. Hook up! Cory
Reactions: pacificscout, jiggermyster, woodfish330 and 2 others
Upvote 1

That $25 dollar fee for some fish sounds fishy to me.
Reactions: Tuna Dreamer, coacheric, Tunaslam and 1 other person
Upvote 0

Congratulations. Sounds like you had a great trip!
Toggle signature

Upvote 7
S
Offshore Amazing 1.5 on Fortune out of Fisherman's Landing