With all the great reports of wide open Dorado fishing, with chances for Yellowtail and perhaps a stray Tuna, why not go Paddy hopping?

So, I went fishing with Morris on his 26’ Skipjack, the “Jugular” leaving his slip in Huntington Harbor at about 5:15am Monday morning 08-23-21 with crew Gabe.

We stopped at Nachos, where we bought a full scoop of Sardines, which were just okay, to be expected with all the demand lately. The seas were calm, with very overcast skies and a bit of a mist and an occasional sprinkle.

Captain Morris had plotted a course down to the warmest water south, around the 209 and 312. We ran over the 14-mile bank on our way. Absolutely dead and low temperatures of 67.5. No kelps present. In fact, we ran over 20 miles without any sight of a kelp paddy. Given great visibility and such grease calm seas, we were shocked to find no kelps.

As we passed the 14-mile bank temps rose to 69 degrees and by the time we reached the 209 were up to 69.8 degrees. Still finding no kelp paddies, we continued to the 312. Temps now exceeded 70, but still no kelp paddies. Again, the seas were silky smooth, and we should have been able to spot paddies easily.

Morris received a call out from another private boater that an area about 4.5 miles away was holding lots of kelp paddies, some loaded with Dorado. About 2 miles from the area we stopped on a very nice paddy. Didn’t see any bait but had marks 30-50 feet down, yet nothing bit. We moved on and within half a mile another sweet kelp. Nothing. Arrived at the numbers and a private boater was sitting on a huge paddy. We hailed him and he said there were fish there, but they were picky. They also pointed us to another big paddy not too far off. Again empty.

Morris heard of another call out for wide open Dorado and we set out to their numbers. Of course, so did a number of others. We saw a big paddy with several boats on it. Dorado were jumping around it. We saw one hook up and nothing else. The Dorado kept jumping but didn’t eat anything with a hook in it. I was throwing 20-pound line with a #2 hook and couldn’t get bit. We spent some time here, but no luck. We were now 67 miles from the harbor and time to move north at 1:30 pm.

We stopped on a few more kelp paddies and finally I was bit. It was about a ten-pound hen. Very colorful and jumped a number of times and put up a good fight. Morris had brought a big net and scooped up the beautiful female.

At 2pm white caps appeared, and the seas turned bumpy. Obviously spotting kelp paddies were now a challenge. We stopped on a few more paddies for nothing, as a few Doritos teased us. No way they could swallow a Sardine, too little. It was certainly a long rough ride uphill and we arrived in Huntington harbor at 4:15pm.

Burned 80 gallons of diesel. A long boat ride for one Do Do? But we gave it a great effort, what more can you do?

Thanks, Morris, we tried, we’ll get them next time.

BTW Morris asked me to give thanks to Sea Dancer for putting in sensational effort on maintaining the boat and providing the installation of Spot Hold trolling motor, which keeps you in place, allowing you to avoid using an anchor. A marvelous addition to the tools of fishing. Right on Sea Dancer, well done!

Some pictures of our previous two trips to Catalina.

Four Bluefin caught by Morris and I, Gabe with his Tuna and 19 pound Yellowtail. 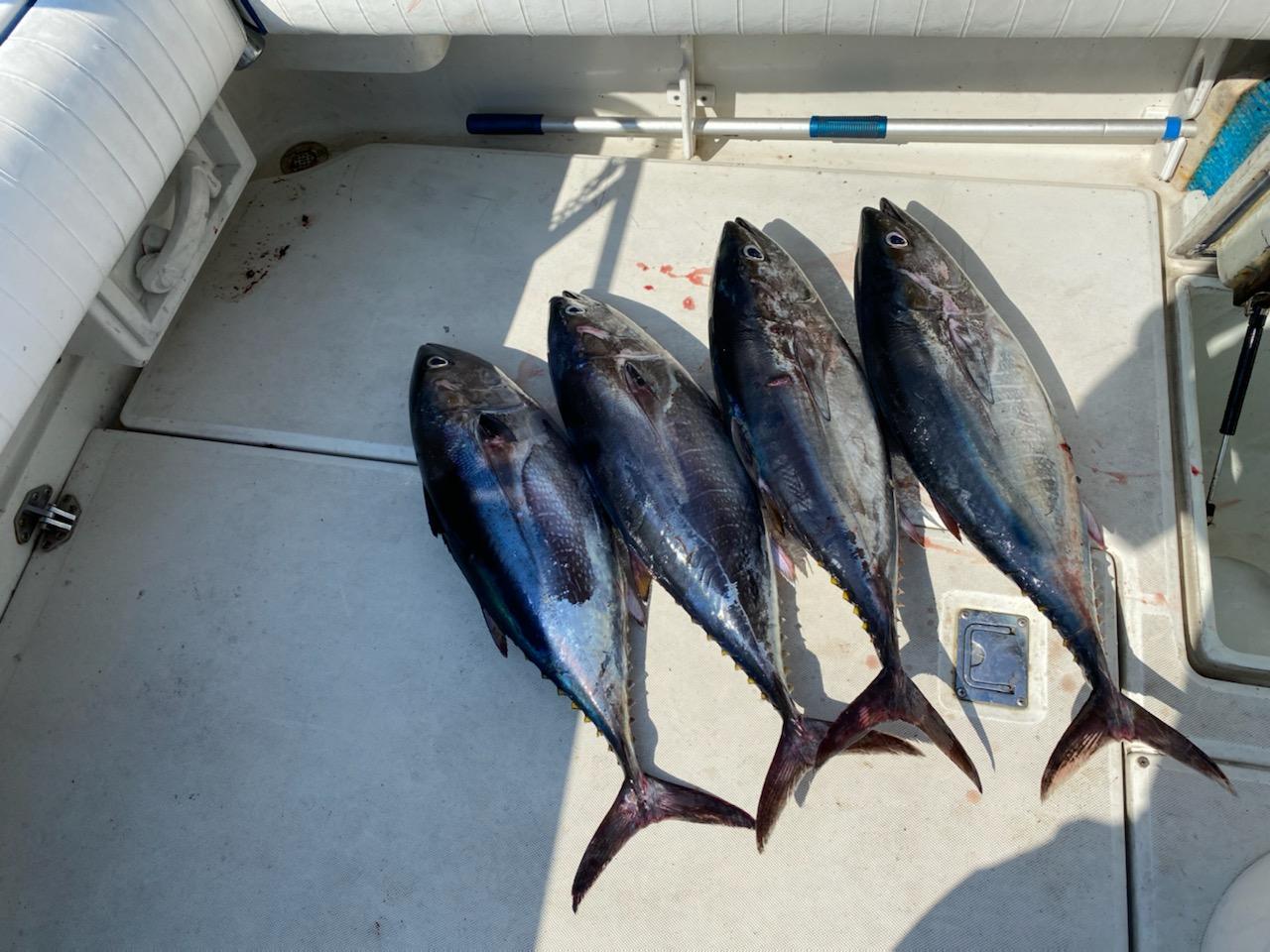 Toggle signature
Thanks for your report. Hook up! Cory
Reactions: Mark C., Cheech, JK155 and 27 others
Upvote 2

Good job! Thanks for the pics and report.
Toggle signature
-AH
I get skunked and I can not lie
Reactions: Tunahead and woodfish330
Upvote 0
L

Thanks for the report. Really seems hit or miss lately. Been out twice in 2 weeks and struck out on exotics both times. Going tomorrow, might just stay local and fish rock fish.
Reactions: Tunaslam and woodfish330
Upvote 0

One is better than the skunk!!
And obviously, there were plenty of fish out there, just not quite in the biting mood. Let's blame the full moon

What more can you do, I'll tell what and this is coming from some one who has been skunked __ times get back out and keep trying..
Reactions: Tunaslam and woodfish330
Upvote 0
W

Cory.... if my memory serves me right... I've seen you pull rabbits out of your hat so many times... when others could not. So.... if all YOU GOT was one.... it was a tough day!! Nice to be on the water though. Happy to see your post for sure. Thanks as always for your picts and commentary. Be safe brother.
Reactions: Tunaslam
Upvote 0
T

YOU and CORY need to go catch some nice Bluefin Tuna in the Rubber Ducky! EPIC!!!
Reactions: Tunaslam
Upvote 0

Tunahead said:
YOU and CORY need to go catch some nice Bluefin Tuna in the Rubber Ducky! EPIC!!!
Click to expand...

PS IF you do, don't yank a gaff into the side of the Rubber Ducky!!! HISSSSSSSSSSSSSSS
Upvote 0