Asunción Tournament – The Rossman and the Sea 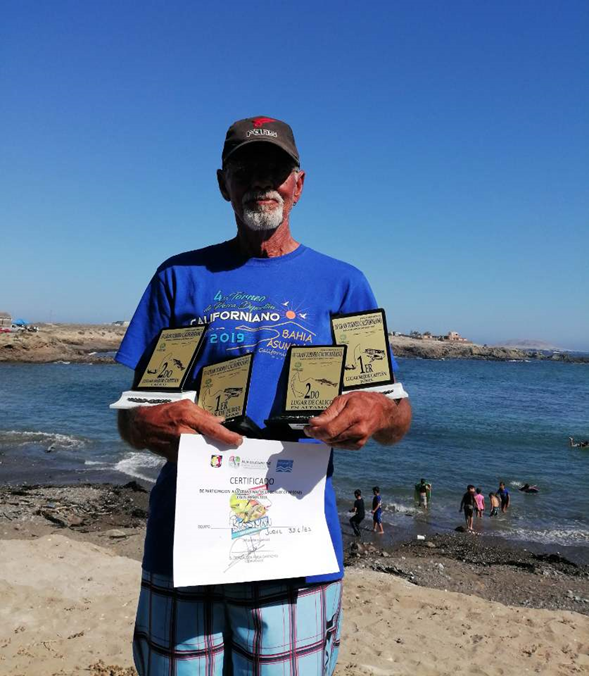 The ‘Rossman’ with an armload of trophies and certificate of entry to the season championship to be held in Loreto later this year. Photo Credit: Shari Bondy


Bahia Asunción hosted its leg of the Governor’s Cup Tournament series on July 15 in true Asunción style. Unlike many of the major fishing tournaments in the more touristy locales in Baja, those held in Bahia Asunción and other small fishing villages such as Punta Abreojos tend to be more of a family affair. The event began on Friday with a youth fishing clinic put on by the state of Baja California Sur and the local Cooportiva, along with the help of the International Game Fish Association who donated one of their Passport to Fishing kits to be used at thirty-seven tournaments throughout the state this year. Thirty-eight kids signed up for the clinic and were gracefully dutiful students, applauding each other as they received their certificates with family and friends looking on.

On Saturday, there was the tournament registration followed by a party typical of those in such places; it was spread out through the town from the Ensenadita where the tournament headquarters were located, through town and along the beach and ran into the wee hours of the morning. There was a lot of good-natured ribbing and side bets on who might win this year’s event among friends and families, which basically encompasses the population of some 1,500 souls who reside here.

Promptly at 7A.M., the boats took off to a blast that could be heard on the far side of town, and entrants scattered to the sea in their hardy pangas built to withstand the tough conditions that can occur in the eastern Pacific - all but one. This is a team-style tournament, each team consisting of anywhere from two to four anglers and a captain. One team entered was an individual in a fourteen-foot aluminum boat one might expect to find on a placid lake; Ross Zoerlof was both captain and angler, venturing out with the pack of hopefuls alone in his seemingly tiny craft. Yellowtail and calico bass were the targeted species.

The offshore division was the main event that included a shore fishing competition for three categories: Youth, Juvenile, and Adult. All three were predictably won by calico bass in the one to two-pound range. Yellowtail fishing is normally slow this time of year in this area that is usually a season behind the rest of the Baja peninsula and San Diego. Even for the open offshore division, early predictions casted doubt on anyone getting a yellowtail within the tournament boundaries. But Rossman, as he is affectionately known, was undaunted, even after almost daily pre-fishing turned up empty results in the weeks leading up to the tournament.

Travelling ten miles north and fishing just off coastal kelp beds for big calicos, Zoerlof hooked and landed a 33.6 pound ‘homeguard’ yellowtail by ten A.M. and decided that was enough. After leisurely hour and a half return to tournament headquarters, he weighed in the yellowtail and a 4.4 pound calico at 11:30. The rest of the teams did not start trickling in with their catches until 2P.M., with a few barely making the 4p.m. deadline.

Ross is a popular addition in the town he chose to retire to after five years of posting remarkable catches, the first year from his kayak and the past four from one of two small ‘tin boat’s he prefers to fish. Other fishermen in this town built on fishing look to him at the beginning of each season to produce the first successful results. He scored the first yellowfin tuna this year; last year, he was the first to catch wahoo, and if anyone was going to get a yellowtail during the tournament, Rossman was the favorite. 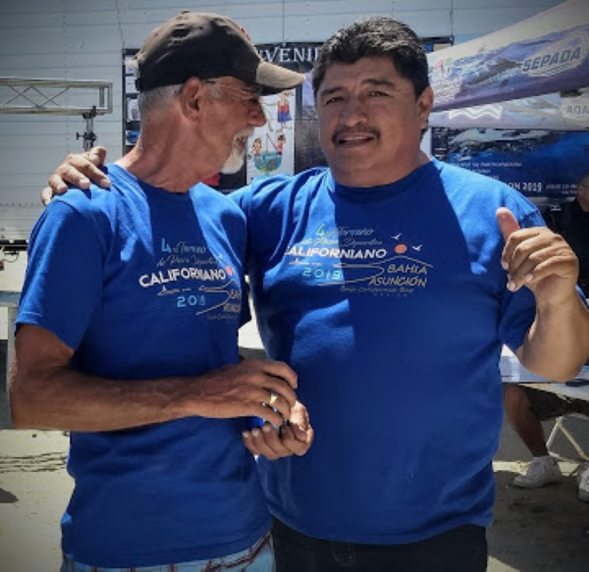 
Betting on Ross, (who hails from, in his words, “An equal amount of time in Mission Viejo and San Clemente) is a fair bet: he puts in the time and effort, fishing year-round as often as conditions allow. Just two days before the competition, Ross put some 67 miles in one trip on his little boat while trying to find yellowtail. His efforts at 70 years of age seem almost superhuman, and he is often compared to the character in Hemmingway’s ‘Old Man and the Sea’. As a testimonial to his popularity, the village’s main restaurant, Loncheria Mary, has a painting of Ross in his tin boat on their storefront mural.

It’s not just fishing that captivates his fans; Ross gives a lot of his time to local efforts and fundraisers, supporting every cause from spay and neuter clinics to donations to school events. Well this year, good karma and a lot of effort paid off again for the slightly-built icon: he won the yellowtail division and took second place in the calico bass category. He also won two trophies for best captain in each division.

With only five yellowtail caught in total by the twenty teams entered, adjustment of fishing tactics was the determining factor. When commenting on his first yellowtail caught this season, the tournament winner, Ross said: “Last year's (first) fish was caught within a quarter mile of this year's. I had spent the previous three days in the area and they were all yellowtail watching trips, with yellows blowing up on bait all over the area but couldn't get a bite. Much like the tourney participants reported yesterday afternoon. I finally went to trolling my XRaps way, way behind me. Probably over 100 yards, and that broke the ice”

There is a statue here by the ‘Y’ in the paved road through the center of town. It is of a fisherman toting an oar over his shoulder and an homage to the hardy people that settled the village and began the Coopertiva that supports it eighty years ago. I can easily imagine a future addition there alongside that statue as a loving tribute to the Rossman and the Sea. 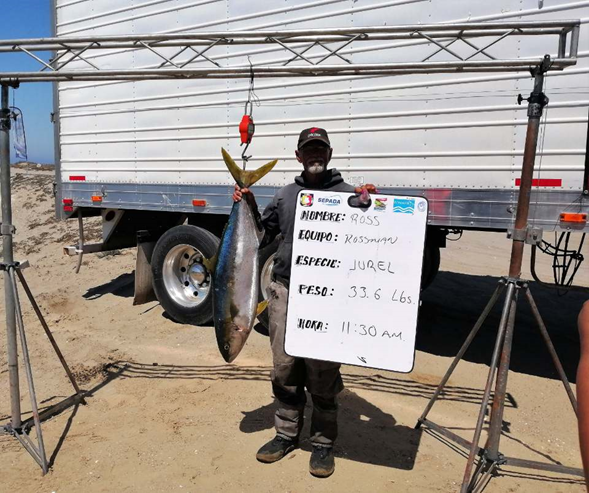 Though the tournament winner was not a surprise, the winning fish at a chunky 33.6 pounds certainly was. Photo Credit: Shari Bondy
Reactions: Bottom Line, aguachico, CartridgeCalls and 4 others

bahia asuncion, on the west coast of central baja

Excellent reporting Dan of a most excellent tournament! Rossman's fanclub is ever growing! Finally the yellowtail are moving in to our barrio. The yellowfin tuna beat them to it!

One thing that I wanted to mention was how amazing the kids clinic was...those kids were soooo attentive and eager to learn and I couldnt help but feel Surfdoc Stans presence. It was always his passion to teach kids how to surf fish and he donated rods and gear to lots of kids and showed them how to use it. He would be so proud to see this program.

Many thanks to You Daniel and Rossman for your participation in the clinic and tournament closing the cultural gab! Here are a few pics from the days. 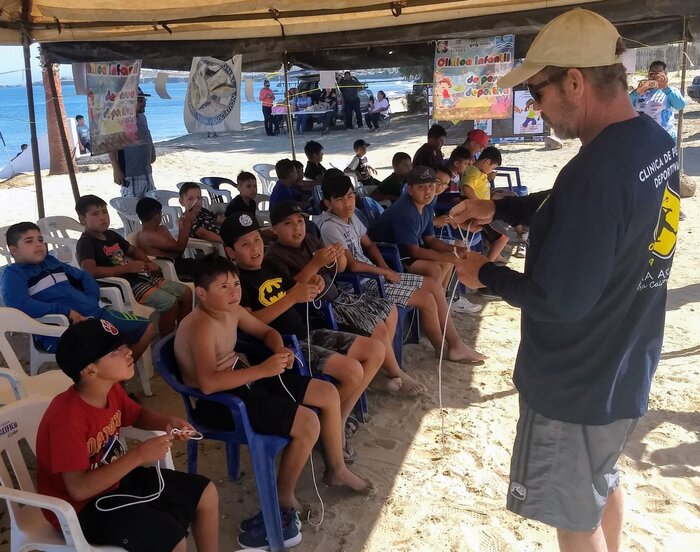 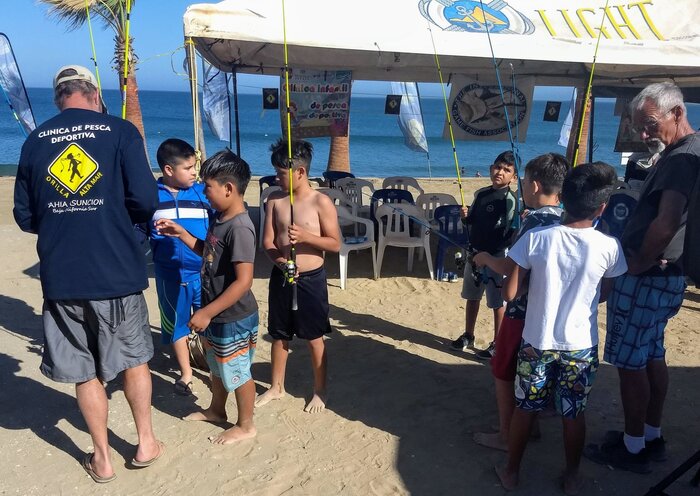 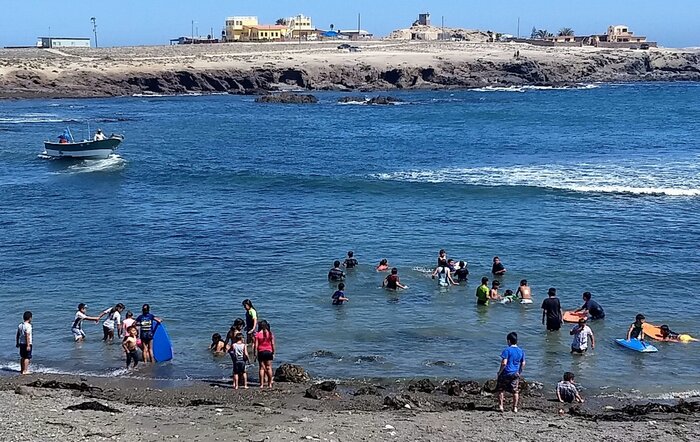 Thank you Shari! The clinic was a blast, and I was so glad I was asked to help out. I did send a piece on the clinic to WON, but maybe too wordy. I had no idea of the IFGA Passport to Fishing program, and it's an awesome thing that Gonzalo is taking that clinic to 37 events in Baja Sur this year. It only began at the IGFA this past April, so let's hope it continues on indefinitely! https://igfa.org/passports-to-fishing/
Reactions: Bottom Line and Tunahead

Congrats "Rossman" with the Trophies"! NICE FISH
The kids look the real winners there.

Hey Ross, Congrats. I guess the next thing to do is to change your name to Arce.