I finished the installation of a 84"-36v Rhodan trolling motor on my Mackinaw last week, including three 100AH LiFePO4 batteries, and a 3 bank Noco charger . Locating the motor on the bow proved to be a challenge but nothing my Bridgeport couldn't handle. After two short trips, I can say the results are amazing! The motor is easy to articulate, I'm glad that I cut the rail rather than try to squeeze it under.

I ordered the first motor from BOE Marine, it arrived damaged, courtesy of the bunglers at UPS. I returned the motor directly to Rhodan and a replacement arrived about a month later... also damaged by the bungling apes at UPS. After discussing the cosmetic damage to the Linex coating on the motor, I kept it with assurances that any unknown damage would be covered by the fine folks at Rhodan. If you are purchasing a Rhodan, I suggest dealing with them directly, my experience with tech and sales has been excellent.

The bow rail and raised cuddy made it nearly impossible to install the motor without cutting the rail. After several mock-ups and my ensuing analysis paralysis, I finalized a plan to cut the outermost rail section over the anchor pulpit and fabricate a raised platform over the functioning anchor with just the angle needed for the head of the trolling motor to clear the hatch on the cuddy. I measured at least 3 times and used the inverse trig function on my calculator to find the angles I needed to cut into the aluminum stock. Any of you remember: Oh Heck Another Hour Of Algebra ( sine* cosine*, Tan* )?

Its on there! The mount is a bit chunky now and will not receive any awards for artistic design but I will whittle it down a bit and coat it with white Line-x for a "cleaner" look. A RAM adjustable strut mount now supports the shaft from the sloped area in front of the hatch. 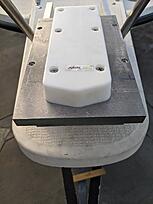 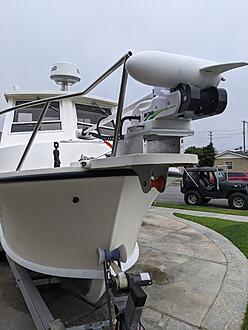 After the motor was mounted I started installing the batteries, charger, and power wires. I located the three big 12 v 100AH batteries (group 31 size but weigh less than 20lbs each) in what was the boats tiny enclosed head along with the charger and circuit breaker. The motor is connected by #6 marine wire with an Anderson connector. I purchased the batteries from a Chinese seller on Ebay that has a warehouse in Fullerton. I received the batteries in 3 days. Unfortunately, one of the batteries would not reach full charge but the seller shipped a replacement only a few days later. So far so good. I have some tidying up to do yet but it works! I located the batteries and charger in the head and ran the power wires under the wooden trim up into the anchor locker. The 50A Anderson connectors are just inside the deck pipe (not used with the vertical windlass).

I have used the motor twice for a total of five hours, the battery monitor shows 89% capacity! I'll need more time to determine the actual run time on spot lock and slow trolling but so far it looks really good.
Last edited: Apr 14, 2022
Toggle signature
Steve

Good job. Its always hard to mount with rails, so something has to give. The good part is that you have a pulpit to mount the motor and space behind for the motor shaft. It looks rock solid.

You definitely will need to lower the motor more when you get into the water. I hate it when the propeller comes out of the water and you hear it suck in air. It also makes the shaft flex a lot. Its amazing how much the shaft can flex.
Reactions: tuner
Upvote 0

Can you send me information on those batteries?
How to buy?
Upvote 0

I checked the site and only the 50AH version is available at this time. There are similar batteries available for a little more money that have a blue tooth enabled BMS so the batteries can be monitored on your phone.

This is the same case without the voltage/%charge display. 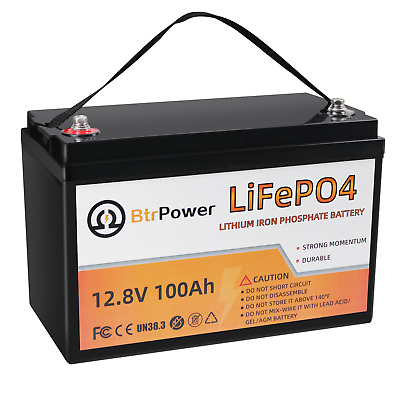 I really thinking about trying them out
Upvote 0

How are those batteries treating you? I hope you have good news, I'd love some details. The original seller on eBay is out of stock, I'm looking for something similar for my house bank.
Reactions: KID CREOLE and repo805
Upvote 0
Show hidden low quality content

Designed to fail thanks Lenco