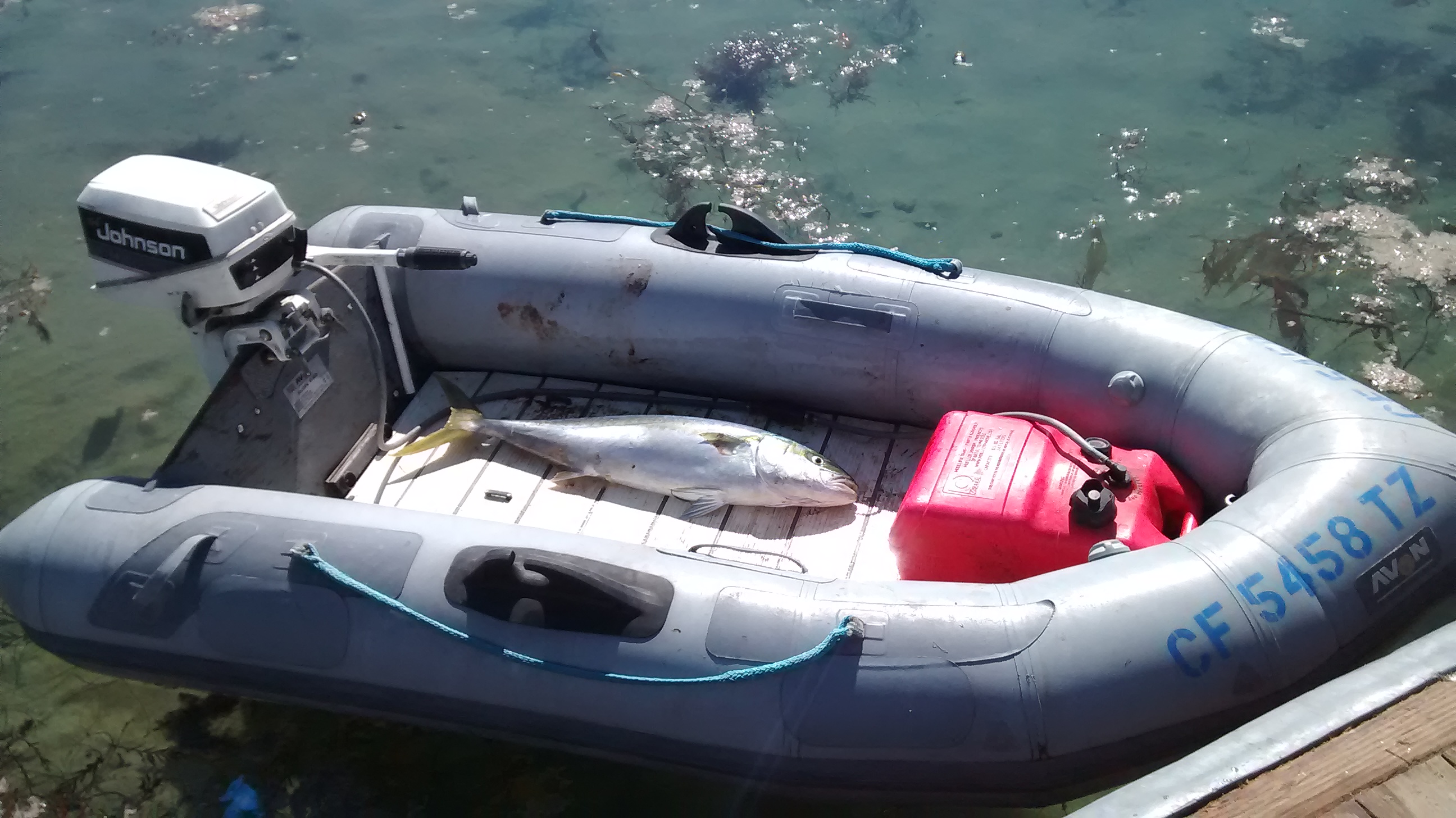 Long Version:
Well, after looking at "Lake Placid" for the past two weeks, I could stand it no longer. Saturday night I told the woman, "I'm going fishin". I woke at 3, went back to bed swearing to sleep for just another hour, and rewoke at 4am. Out to load the boat, motor, gas, and rods in the car. I filled up the tank, thinking it was going to be more of a MPG test run than anything.

I get down to the SBLR in King Harbor to find only one other launcher there, calm conditions, and full nighttime darkness. Remembering I brought no flashlight, I also regretted the candybar surface iron and fresh bottle of pro-cure I forgot at home on the TV. By the time I was all set up, it was first light. I jumped in hoping maybe I could score some live bait. I found nobody home at the receiver. "Whatever" As I pulled the u-turn to leave the harbor, I see the Indian preparing to exit. I let them go first, and figured I could race them to the point. Well, I forgot to start navionics, so after ducking into their wake a time or two I laid on the throttle and booked over to Rocky Point.

At about Topaz Jetty I passed the Indian. I squirted on as fast as the flopping roll up floor would allow, and found myself at Rocky Point almost totally alone. There was no one on the point. I looked back, and saw the Indian about a mile behind me. One or two boats were inshore of me, so I puttered around for a while figuring out a game plan. I had NO bait. Live or dead. I thought about the prospect of making macks, but I saw no bait puddling, and a couple of probes with an AA single tail failed to illicit any subsurface interest.

Well, I opted for a fallback plan. Lobster pots were present. I figured that any feeding fish would be clustered in the general area of the string of floats that crosses the point. I worked the skunk off with a single sandie early on, on the same AA tail. Then it came to me. What if I put a couple lures back and putted around to locate a little life? Out came a Tady 45 mack pattern for the 30lb rod, and a colt sniper for the 20lb. By then I had drifted a 1/2 mile south, and the sun was peeking up over P.V. I pointed roughly back to mid-way between the red bouy and the point, and was clocking about 3 mph on the Navionics speedo. I must have been pointed up current. Getting back to the point took a little more motoring than I thought. I resolved to watch the rods.

I'm looking at the 30lb rod tip's wobbling, thinking "wonder what that tady looks like at this speed?" when I see a little twitch, followed by major bendo! I pluck the rod from its place in my oarlocks, and take a test pull on it. A heavy customer pulled at the other end. I thought about clearing the other line, and decided "nope, got bigger fish to fry". I had no idea what was on the other end. Being a realist, I thought it was probably a pesky BSB. Then, a cap on my daiwa sealine x40sha handle pops off the handle. Well, it worsened. Both caps popped off, a spring popped out, the end of the spring skewered me in a finger, and the handle popped off it's spindle. I shoved it back on and continued. By this time, about 4
mins into the fight, I'm wondering WTF kinda fish it is, and whether its at color yet. I look down, and see in the distance a beautiful silvery silhouette, and know its the Avon's first yellowtail. I consider how to get it in the boat without a gaff, and realize it shouldn't be that hard. The fish lifts up to the surface, I grab for a gillplate instead of the jig, and hoist it in. By the time I see how big she is, I realize I don't need any more fish for the day, and I can get back in early.

Well, I love fishing. So, I figured I still had productive water on the way back to the dock. Jigs go back in, and I keep working my way around the point. I nailed a 3lb calico on the tady rounding the point. Now. before you think "Wow, how easy that was!", I hung up the sniper a couple times on stops. I hung up both jigs a couple times on kelp. I had to dodge lobster floats. I had to re-rig the 30 lb rod with a Penn 500 with an intact handle. I had to avoid the rest of the boaters and their chum-zone areas.

I also stack two rods crossways in oarlocks of a boat less than 9 feet long. So, after I rounded the point, when the 20lb rod bent into a spaghetti noodle, and peeled off a couple runs, I struggled a little to free it from the oarlocks. By that time, whatever had a new sniper for lip jewelry had broken off and gone. I retied an Ahi Deception anchovy that SabaSlayer swears by, and proceeded to get harassed by pencil-pikes as I headed down towards Malaga Cove.

By then I had it down to a science. I just kept motoring while I reeled in the cudas, and left the second rod in its oarlock. I got a couple doubles on the pencils. Hitting Malaga, I turned back to the harbor to see what top speed I could get going downswell. Navionics registered a best of 19 MPH for my rig, which is about what I expected. I have yet to refill the tank, but I figure it is about the usual 8 mpg.

As I drove home I called the wife. I told her "put stained shirts on all of our boys, I need help unloading." Only one really dove into the task. Very good quality ceviche soon followed. I feel truly blessed with a tasty fish. 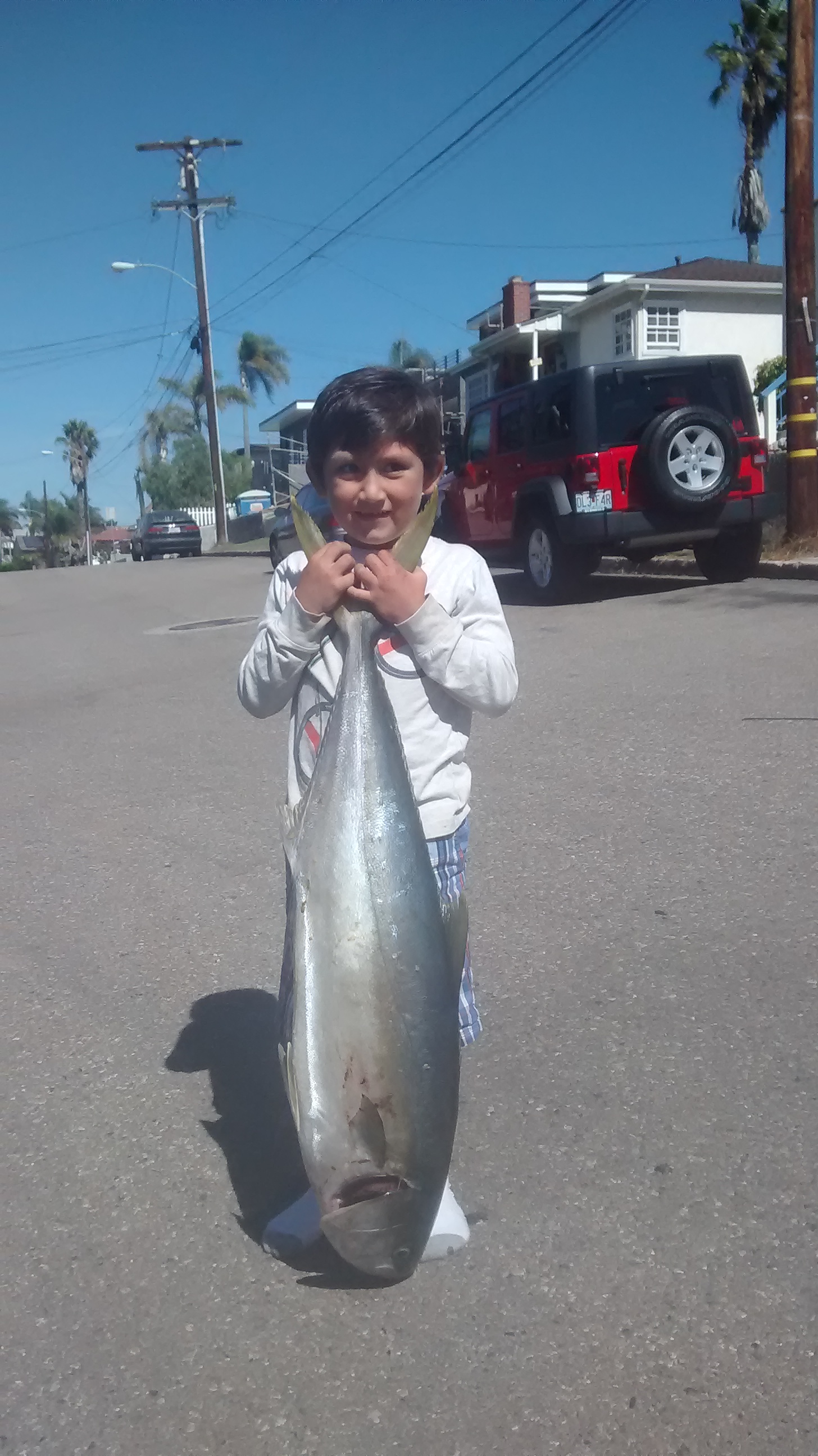 Dinner!
Last edited: Oct 11, 2016
Toggle signature
"When you fly in the face of convention long enough, you no longer wonder why little bits of it hit you in the face"
Reactions: Radical Ross, SoCalAvet, tmitch760 and 13 others
Upvote 0

Nice! I've always wondered about trolling surface irons, but just never tried it. What speed were you dragin' the 45?
Upvote 0

Thank you guys! I appreciate the comments. Russell, 2.5 to 3.4 mph. Trick is you don't want to go fast enough for it to spin and create line twist. Drop the jig out short first to see how it swims, and if it swims right, drop it all the way back.

-Mike
Toggle signature
"When you fly in the face of convention long enough, you no longer wonder why little bits of it hit you in the face"
Upvote 0

Boat
Party Boat Near You

Congratulations on a quality yellow! That's a real feat considering you had no bait and basically a spur of the moment trip! Enjoy your tastey ceviche and kudos on a morning well spent.
Upvote 0

You know I've been trying to get out fishing. Qualifies as my best solo trip this year so far. You up for bassin tonight?

-Mike
Toggle signature
"When you fly in the face of convention long enough, you no longer wonder why little bits of it hit you in the face"
Upvote 0

I love how much experimentation can pay off in finishing. If you have a feeling or idea, go for it, look what can happen. Nice work brother! This should keep you fired up for awhile!
Toggle signature
Fishing is my happy place, catching is the cherry on top.
Upvote 0

I'm going to take live squid to rocky point tomorrow (Monday ),
just wondering how deep of water you were in when you caught your yellow
Upvote 0

jimu said:
I'm going to take live squid to rocky point tomorrow (Monday ),
just wondering how deep of water you were in when you caught your yellow
Click to expand...

Any luck at rocky point today with the squid?
Upvote 0
J

jgf said:
Any luck at rocky point today with the squid?
Click to expand...

The wind and rain scared me off, so I canceled.
Upvote 0

, not even close, but muchos thanks yous anyways!

It was a Holographic green mack pattern 45!

I tried that this weekend. If no answer, keep trying. Mike shows up at 5:30am, best bet is to bait up at the same time or after the Indian does.

Alby, did you ever work as a deckhand on the Special for Glen back in 1990?


jimu said:
I'm going to take live squid to rocky point tomorrow (Monday ),
just wondering how deep of water you were in when you caught your yellow
Click to expand...

There's a little 10 fathom dropoff that runs around the point. It was close to that, between the point and the bouy. But keep in mind that it was a full week+ ago, and I caught it on the surface. I saw no sign this weekend. But that's another saga.

Keep me posted if any of you get out there with squid, eh?

Best Regards,
Mike
Toggle signature
"When you fly in the face of convention long enough, you no longer wonder why little bits of it hit you in the face"
Upvote 0

FishinMcNuggets said:
Alby, did you ever work as a deckhand on the Special for Glen back in 1990?
Click to expand...

No..occasionally did the city to visit with Jason and mason and the Kiaora and Indiana up at Santa Monica well before that but otherwise I didn't do much 3/4 and 1/2 day.. Didn't even go to redondo much except to fish with Gary on the blackjack...
Upvote 0
Show hidden low quality content
You must log in or register to reply here.