Launched out of Davies at 5:30 for what I like to call, our Sunday morning coffee. ran over to nachos for a decent batch of bait.. started out rough but after weeding through the few bad ones, there were more clean baits then I thought. Ran down to I believe angles gate (correct me if I’m wrong), it was not the one with the light house but more the fog horn. By 6:30 we were making mackeral and had a wide open short bass/skulpion surface bite on bait fish which was weird. Skulpion were literally boiling on bait.. After that madness, we proceeded to make about 25 pieces of mixed, green back, and Spanish Mack’s. From there, we ran the 30 minutes over to rocky point in just about sheet glass conditions, we did 34 miles an hour untill crossing PV then we did 28.

we got to Rocky point about 7:00 with another boat, and deployed the trolling motor anchor mode.
After that, it took a second but we turned a plunger bite of bass into a wide open short barracuda bite, and an almost wide open 4+lb bass bite. We spent about 3 1/2 hours just working one spot of kelp untill we got tired of it and wanted to go make some rock cod. (Side note, all the sport boats and a bunch of private boats were sitting off the redondo trench, I heard WSB and YT were swiming through but who knows)
At 10:00, we ran over to my ling cod spot that normally produces but this time was off. I think it was because the current was no where to be found. When we got there, the water was dark blue clean, the type you would see tuna fishing which was always nice to see. We spent about 2 hours working my ling cod zone for nothing. At that point we were about ready to call it, but we spent about another hour searching for sand dab for the mom and buddies girl friend, who are obsessed with sand dab. When they heard we didn’t get any they literally said next time stay out there till you get them or don’t come back,lol.

Back at the dock at 2:00, rinsed off, and put away at home by 4:00. Overall a little longer daythen expected but it wasn’t bad.

15-40 lb test worked for the cuda and bass. I stuck with 40 becauseI wasn’t cut off as easy and if I hooked a yell tail I had a much better chance of landing it.
1/0 circle hooks were key for these fish, there were lots of pick ups but no hook sets.
Sardines were only bait that caught fish
Lots of barracuda but all just a hair short. Type of stuff you would go catch and release with newbies just to get them catching.

On a side note, I paired up my okuma Tesoro 5 and my phenix black diamond 20-50 rod and man did that thing perform.
yes, the fish we were catching were not much of a challenge but the free spool, casting, drag, and overall size of the reel was immaculate.
I could side cast a bait approx 50ft and if it was an overhand cast I could get closer to 100ft if I had to guess. If I had to recommend an all around inshore set up, I would do this or go one rod size smaller, like a 20-45 or 20-40 instead of the 20-50.

The bass pictured was much larger out there, but was about 4lbs and that was the average size. I pulled one about 6 lbs probably but didn’t weigh it so who knows. 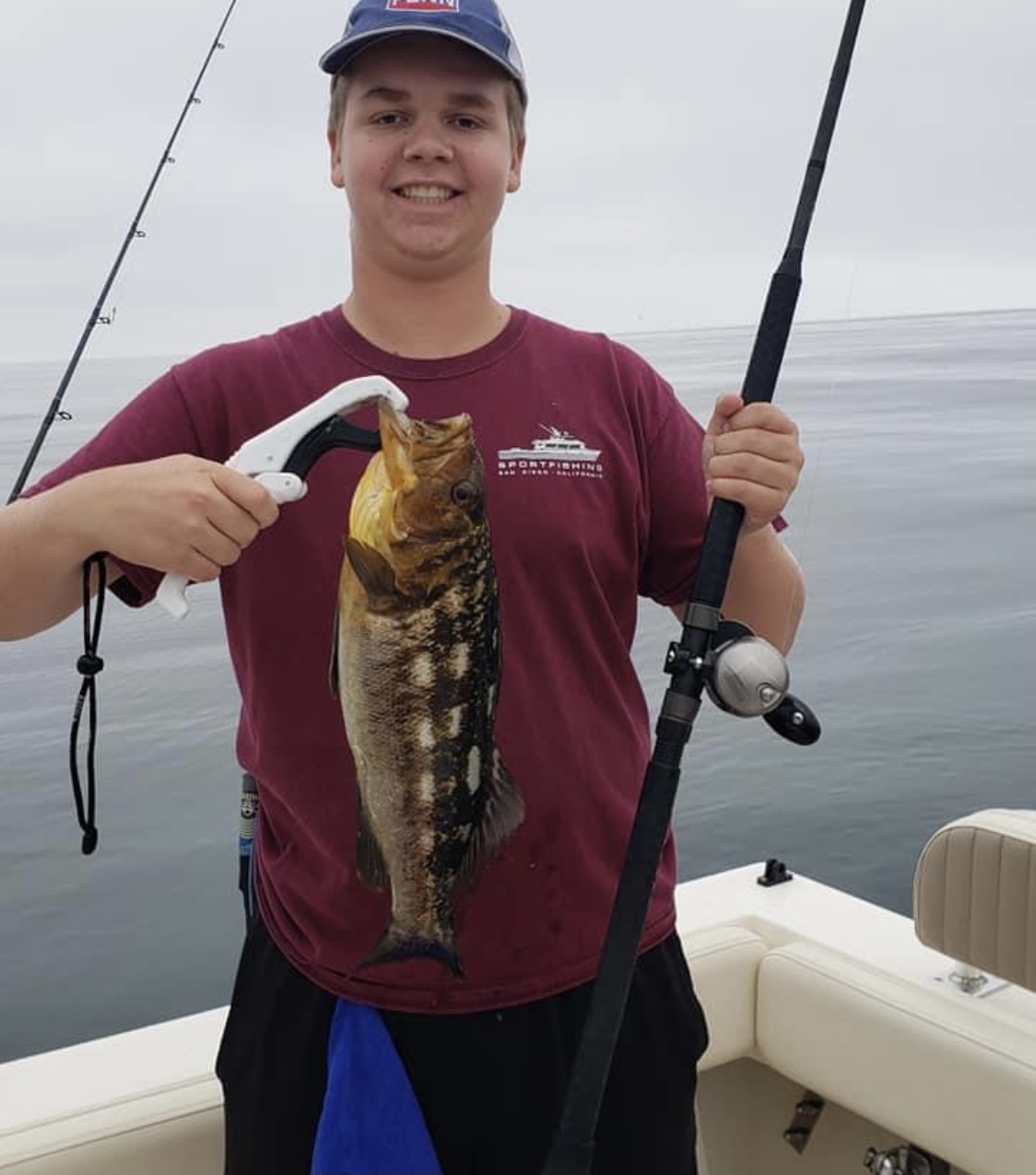 Thanks for the report. We were the other boat out there with you. Lack of current and water was a little green, in my opinion. We had the same nonstop action on barely legal bass and short barracuda. My Dad caught and released a baby WSB. Beautiful weather and nice to see a little local action pick up.

Donkey Nick said:
Thanks for the report. We were the other boat out there with you. Lack of current and water was a little green, in my opinion. We had the same nonstop action on barely legal bass and short barracuda. My Dad caught and released a baby WSB. Beautiful weather and nice to see a little local action pick up.

It was nice to see some cuda roll in thats for sure, I heard nothing about them so i was in shock when we got there.
H

Great day and report, I love me some Sand Dabs too !
I'm picking up my block and crank today, I may have a running barge again before this year ticks out.

I spun a prop right before angles gate on my way out there. Spent the day in the harbor instead. Now I really wish I had headed out there. And yea the bait was sub par for sure, like 50% rolled in 20min.

Nicely done for the day.
Great report ! Now give me that Coordinate for that secret ling spot..lol

That looks great!
I will have to go there and give it a shot!

hookupfish said:
Nicely done for the day.
Great report ! Now give me that Coordinate for that secret ling spot..lol
Click to expand...

Hop in line like the rest, it hasn't produced all but one ling cod in the last month, but haven't been fishing it in prime time conditions of the day.

dktool said:
Great day and report, I love me some Sand Dabs too !
I'm picking up my block and crank today, I may have a running barge again before this year ticks out.
Click to expand...

only thing with the flat suckers are they are too freaking deep. I'm buying an electric reel for my kite soon and will probably throw it on my bent butt for the off time so i can just electric reel these suckers.

Barracuda every where yesterday! Boiling on any chum tossed! Water was calm . color was a stained grayish clean. Marking huge amount of bait. The current was lacking but picked up around 1. If you spend the time you can make a good day of it. Btw sp bait was decent to good! Very little die off! Anchovy colored black back silver sided 5 inch rapala type lures on 8 lb killed it ! Calicos and bonito were all over it. The lures was a lucky craft flash minnow110. Tady blue and white AA fixed hook reeled slow. Old style and they would blow up on it, so cool.
Last edited: Oct 21, 2020
Reactions: jspana
Show hidden low quality content
You must log in or register to reply here.
Share:
Facebook Twitter Reddit Pinterest Tumblr WhatsApp Email Link