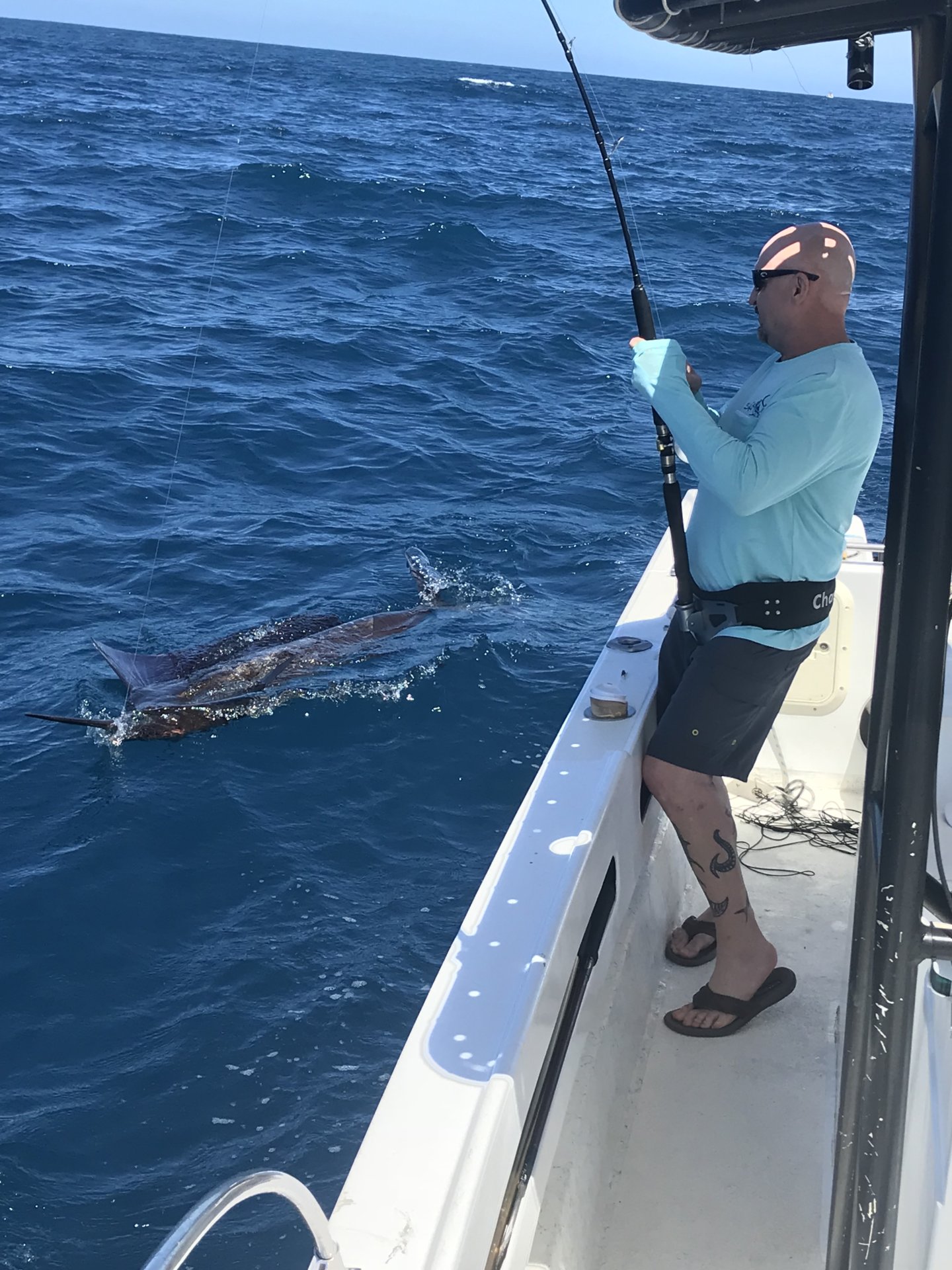 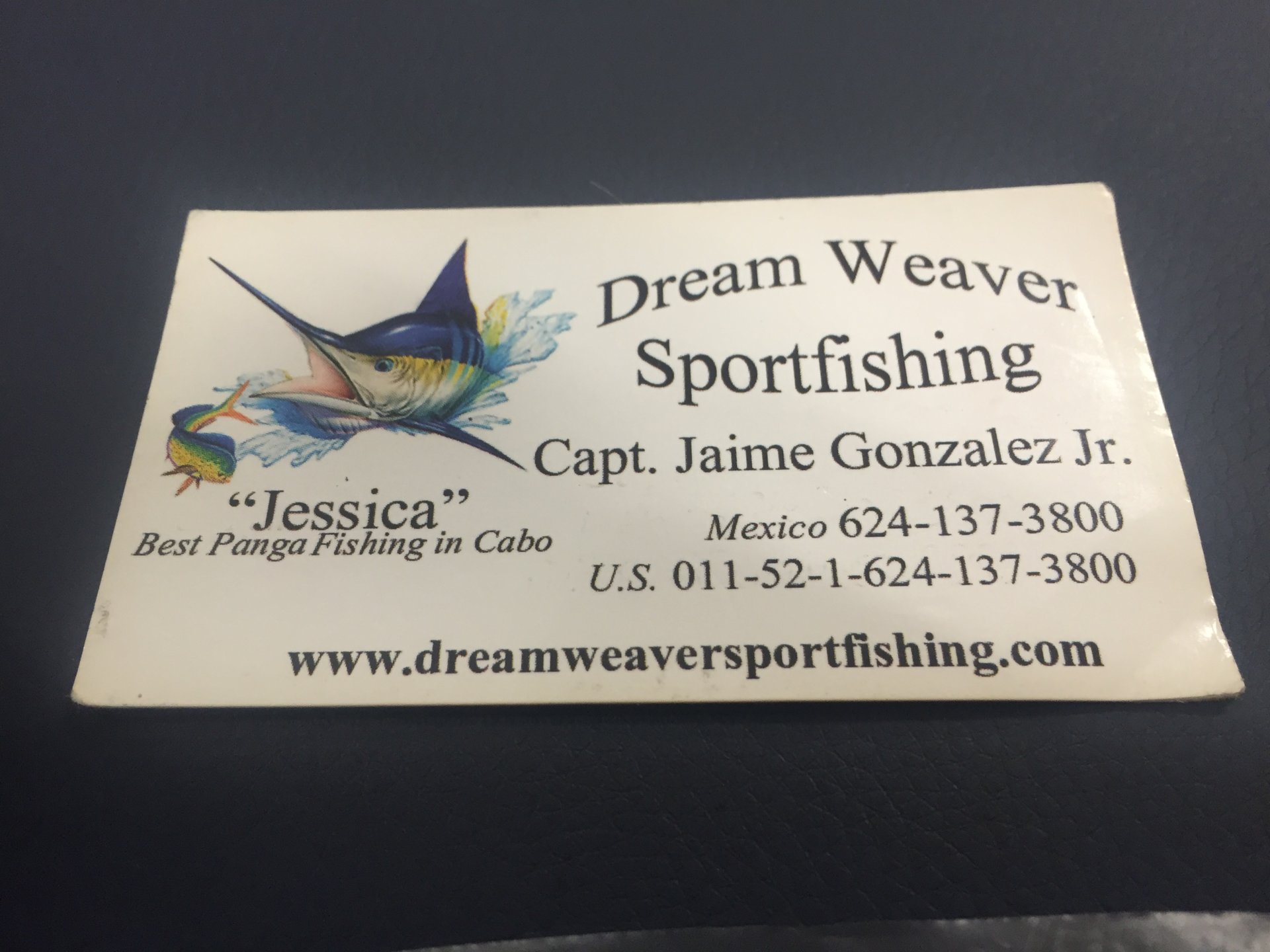 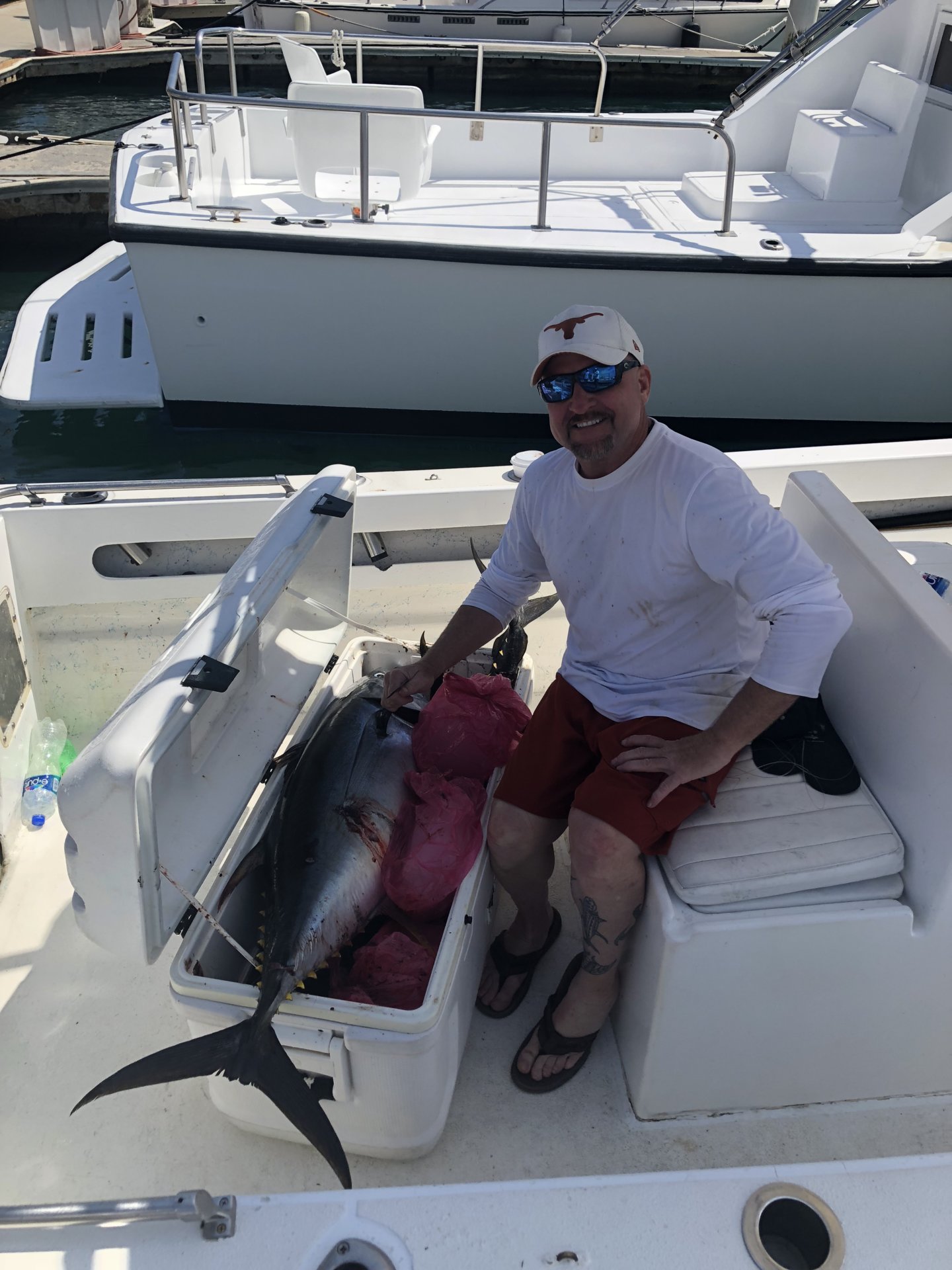 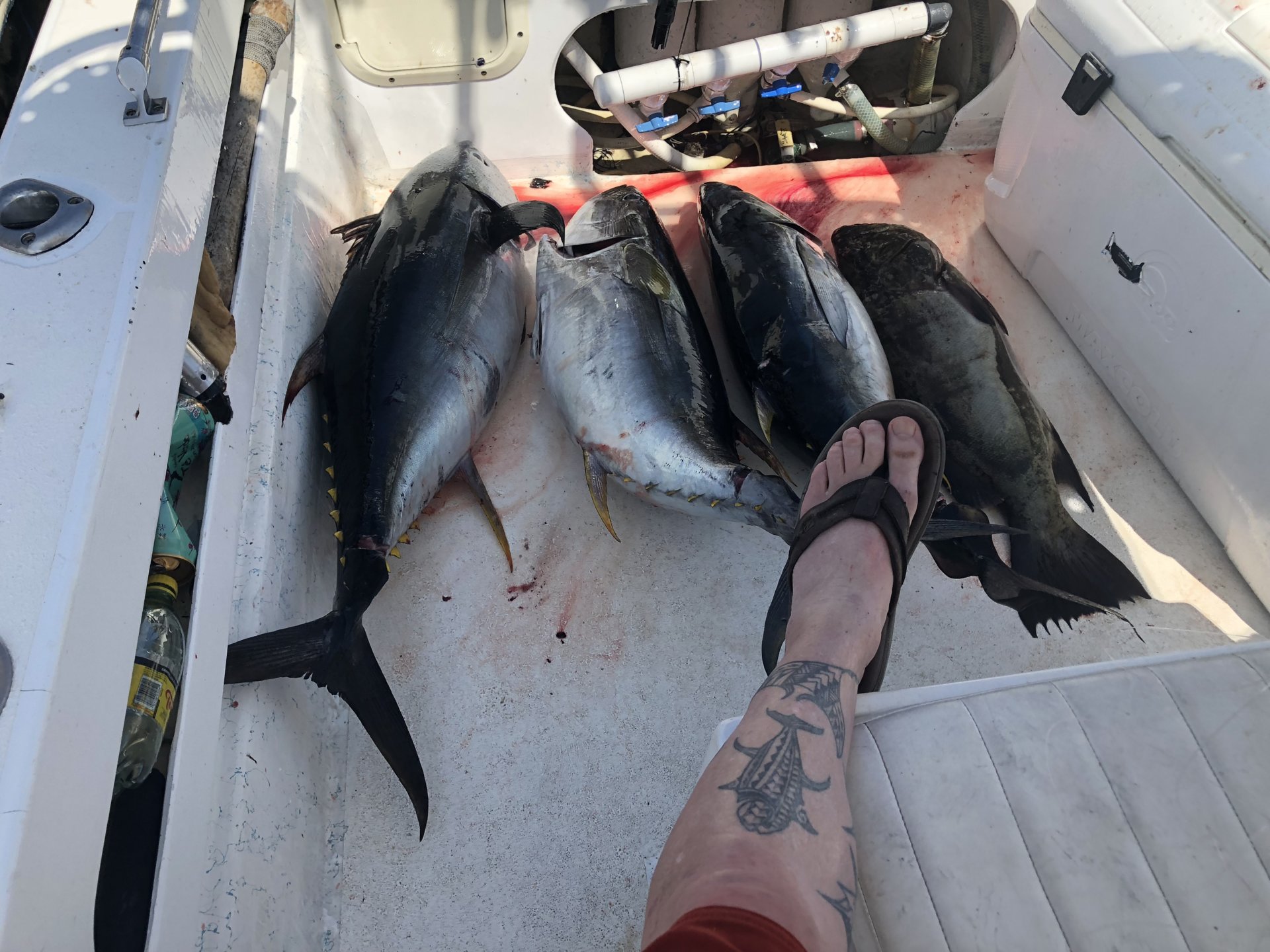 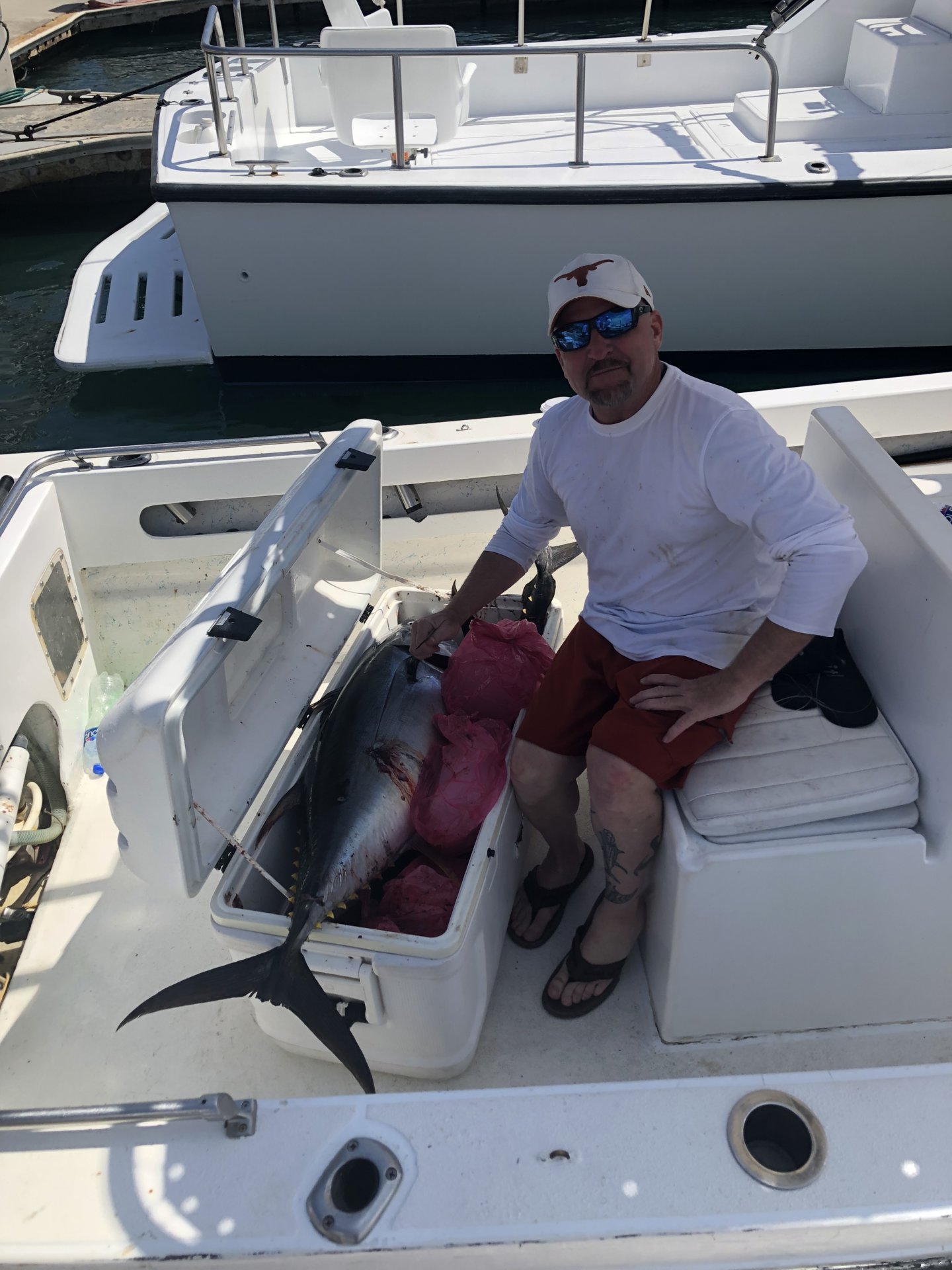 Popped down to Cabo for a short vacation, and to do a little fishing 19-23 Sep with Capt. Jaime Gonzales Jr., on his panga “Jessica.”

Rained like heck the first two days, so I was basically stuck in the hotel (Bahia), having cocktails and hoping the rain would stop.

Finally got a break, and we headed out to the Pacific side to hunt for some catch ‘n release action. Figured that the day would probably be a bust, or tough to say the least, with all the rain and all, but it was nice being on the water vs. sitting around the the hotel, and knew if anyone could turn the lemons into lemonade, it would be Jaime.

Ran up the coast until we found some good looking water. Found some after quite a long ride...Don’t know exactly how far we went, but I think I saw a Todos Santos sign (ha ha).
Saw some dorado and marlin jump, so my hopes grew as the fishy signs were around us.

After trolling for quite a while, mr. overachiever raises and locks up a pretty big sailfish on a pitched cabby. After 20 minutes of big runs, great jumps, and some serious bulldoging, I got her to the boat and O’l girl swam away to fight another day.

Most of the fleet got nada that day...tough day!

On our way back, Jaime tells me that he wants to go out towards Cortez side on our next outing, if the water looks good. He has a hunch that the fish will be there.

Skipped a day, and then went out yesterday.

So off we go...picked up some bait along the way, and arrived at Gordo to find beautiful water and weather!

Did some chumming, caught some bigger baits, and got after it. Had a few tuna bites on the big baits, but nothing hooked up.

Made a couple moves, did some chumming, Jaime worked some iron, and scored a nice grouper.

Jaime flylines a sardine on 60 lb leader, and nada..switched to 40lb leader and we get bit.

Had a couple break off, but all in all, a great day on the water.

Location: Gordo Banks
Bait: Live Sardines and Chiwillys
Leader: 40 lb. fish didn’t want anything larger
YFT: 3 in the boat 40ish-60ish. A few bites on the big baits, broke two off....one at the boat...which I screwed up.
Grouper: on the scrambled egg colored iron.

Get on down....fishing is heating up!

The telephone number for Jaime is accurate, not the website. Just an old card I have.
Last edited: Sep 24, 2018
Reactions: repo805, gilman, Elige and 5 others

Whats the cost?
Expand signature
CartridgeCalls, "Get them in close, Get the job done."
100% Disabled Veteran Owned Small Business.

Depends on how long you want to fish, I believe.

Call or text him. Tell him what you want to do and/or how long you want to fish. He charges a fair price for his skills, and gear that you will be using.

Cabbys are $3 each and I believe I paid $30 for the sardines.

Fished with him a lot he's the best

Humbled by his skills...myself. So young, and so talented.

250 plus bait&Tip
and worth every single penny he is the BEST ive ever fished with
Expand signature
Derek
"El Gallo"
Reactions: repo805

I'll vouch for Jaime as well. Only guy I'll fish with in Cabo.
He'll even put in OT if it's a slow day. He doesn't like to coming home empty handed. If the fish aren't cooperating, he'll change it up, whether it's tactics or location.

LarryHaynes said:
Humbled by his skills...myself. So young, and so talented.
Click to expand...

Pretty close to our experience down there this weekend although we didn't make it to the pacific side, lots of bigger class fish up at the San Luis. Also had a wahoo chew us off at the Iman and missed 2 stripeys and snapped off something big on the stinger on a ballyhoo got me back lashed when I took the clicker off, and burned the hell out of my thumb. There were not many flags flying in the marina in Cabo at all. Larry let's catch up one of these days in SA, I am in Boerne now.

Fishing, a perpetual series of occasions for hope.

In a Pineapple, under the sea.

Great report. Fished with him a few times.

The rain really messed up my plans out there for sure. Made it out on the 17th and headed all the way to Iman bank. They closed the harbor to boats 40' and under. We are 44' so they let us go. Lost two fat tunas one on the flat fall and the other on a fly lined chunk of squid. Watched as others landed ~80lb. tunas. By far the key was to have sardines which we didn't. Got sawed off by a wahoo east of gordo and landed and released/tagged an ~150lb. blue marlin on the way back in.
The rain that followed (18th-20th) pushed all my family activities so I never made it back out.
Saw a few tunas flags flying on 21st. Glad to were able to get some!

+1 for Jaime.. I'm fishing with him again mid Oct... Stand up dude.
Expand signature
Take a rip, get a hit. Repeat...

Sounds good. I like that side of town.
A

Larry, I used to fish with Hiram and Jaime all the time years ago. They were a dynamic duo. Do they still work together or did Jaime go solo? Is the only way to get a hold of Jaime is through his cell phone or does he have a website?
Does Jaime only fish inshore with his panga, I would guess he is a little limited how far out he can go.

Lastly, have you ever fished Cabo mid March. What's it like, thinking about sneaking away for a quick trip.

Sorry for the late response. Work getting in the way!

I’ve not seen them together for a while now, but I know they talk.

Jaime will go to where the fish are....he’s only limited by what Mother Nature puts in his way. Ha ha.

No website, but his English is so good that you can text him.

Never been to Cabo in March....Spring Break in full swing.