Redemption Near Izor’s and the Shoe 1/31

So Steve got a new 600-watt transducer (TM165HW) and we just had to test it out. For science you know.

Unlike last week (when I got skunked), we hit a few spots near Izor’s for around 50 bass, then over to the shoe for another 50 or so bass before calling it a day around 1 with 105 fish on the clicker. It was probably a 50/50 mix of sandies to calicos. Sandies to 4.5# and calicos to 3#.

Steve was able to split his screen with the new ducer on one side and the 3-in-1 on the other. The difference was clear. The TM165HW showed better detail of both of fish and structure. He took a chance and mounted it on the port side. We could not discern any interference or false signal from being on the side of the up-swinging prop.

Water temp was 59.4 on both transducers—that was reassuring—and there was a smoking uphill current. We spent a good deal of time prospecting new stones that are on the relief chart. It was hit or miss, but when we found stacked up schools of bass, it was game on with doubles as the norm. We were getting bit on the drop like crazy. We got a couple on jigs, but as usual, they bit the 4” Kman Specials like there was no tomorrow. We must have blown through 15-20 of them. This is why I recommend buying 50 of them at a whack.

Anyways we didn’t sink the boat or get arrested or towed. It was a great day on the water with a good bud. At one point Steve was looking at the FF screen and commented “wow, nice bottom contour” to which I responded “Thanks, I try to work out”.

Steve and I are always one upping each other with our boats. Now that I’ve seen what a 600-watt ducer can do, I’ll have to put a 1000 watt in my sled. Looks like there is a B175HW in my Robalo’s future.

Hitting it again tomorrow with another BDer.

Edit: Forgot to mention that Huntington Harbor is now entered and exited by the new private boat channel, and NOT by the Navy dock. IF YOU FOLLOW AN OLD ROUTE YOU WILL HIT SOMETHING! Follow the lit buoys. They switched it over last week. 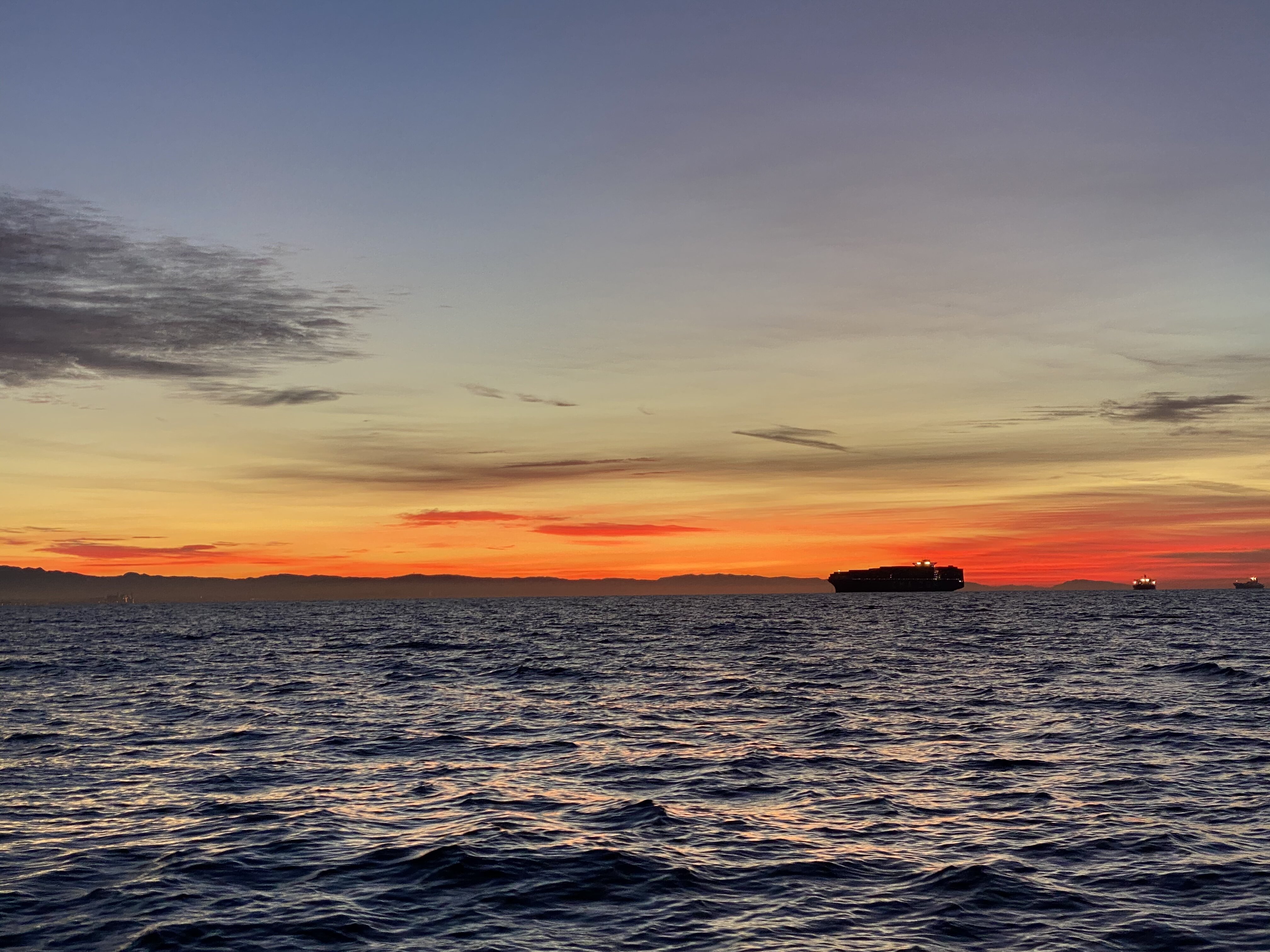 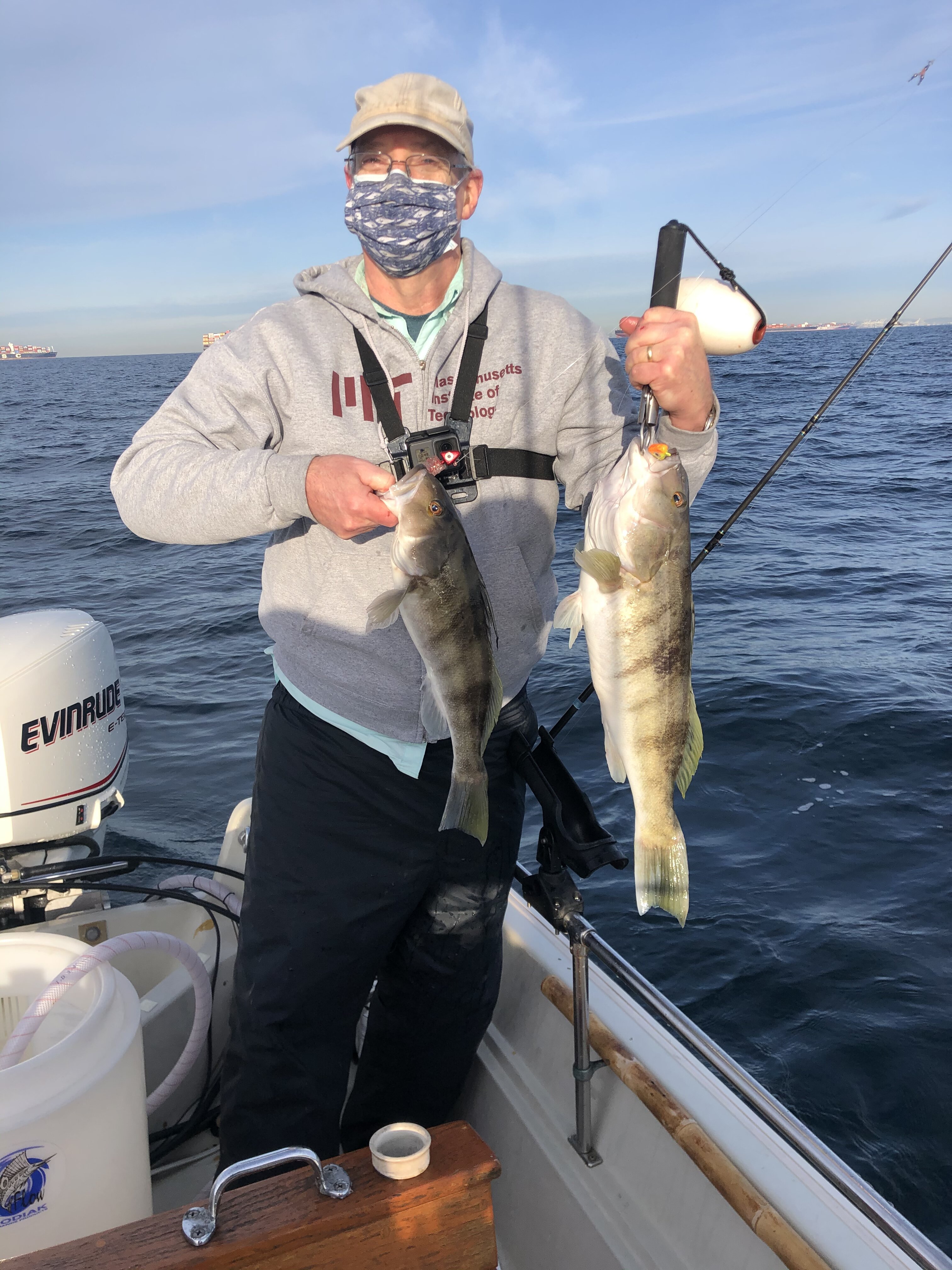 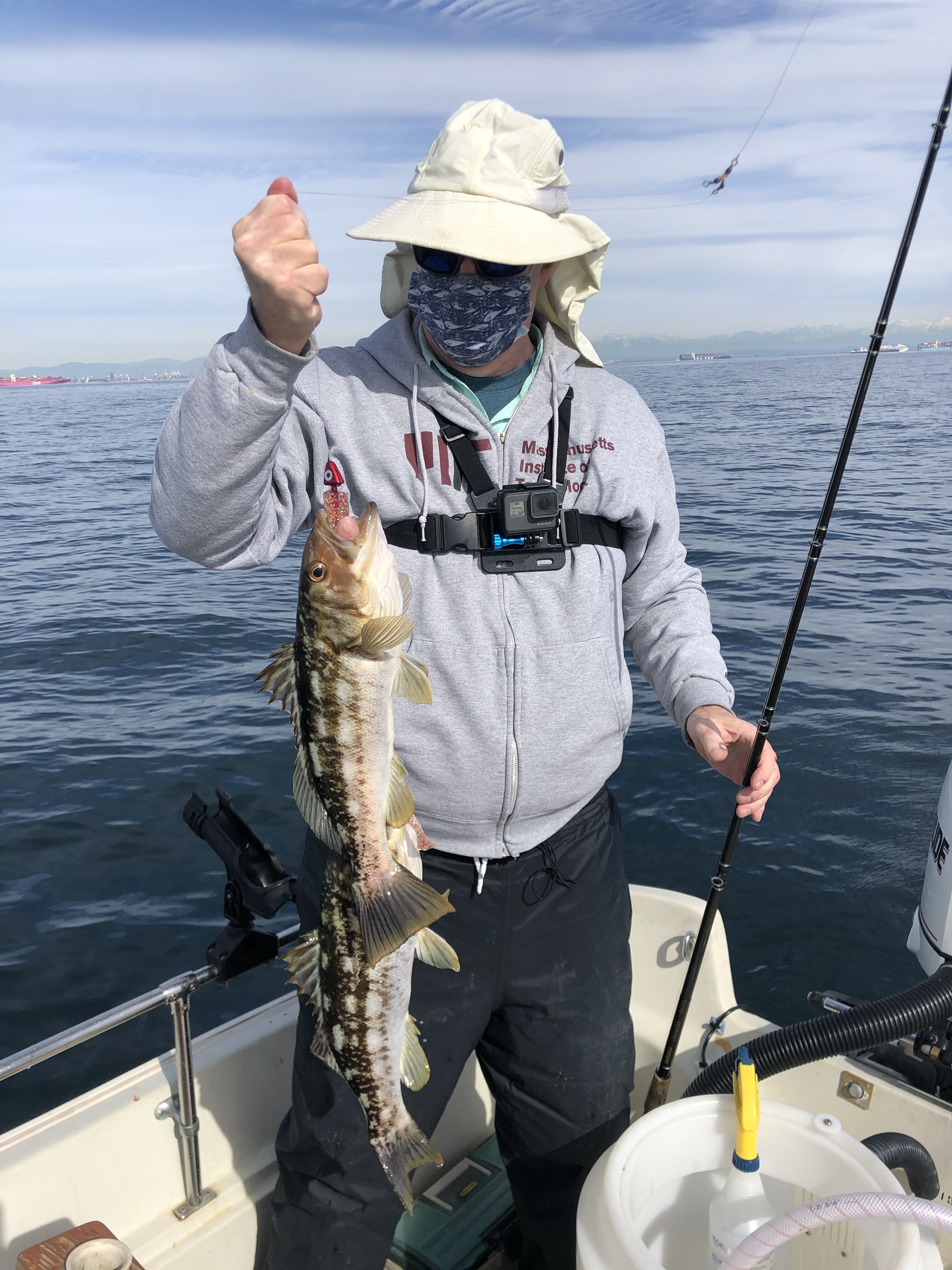 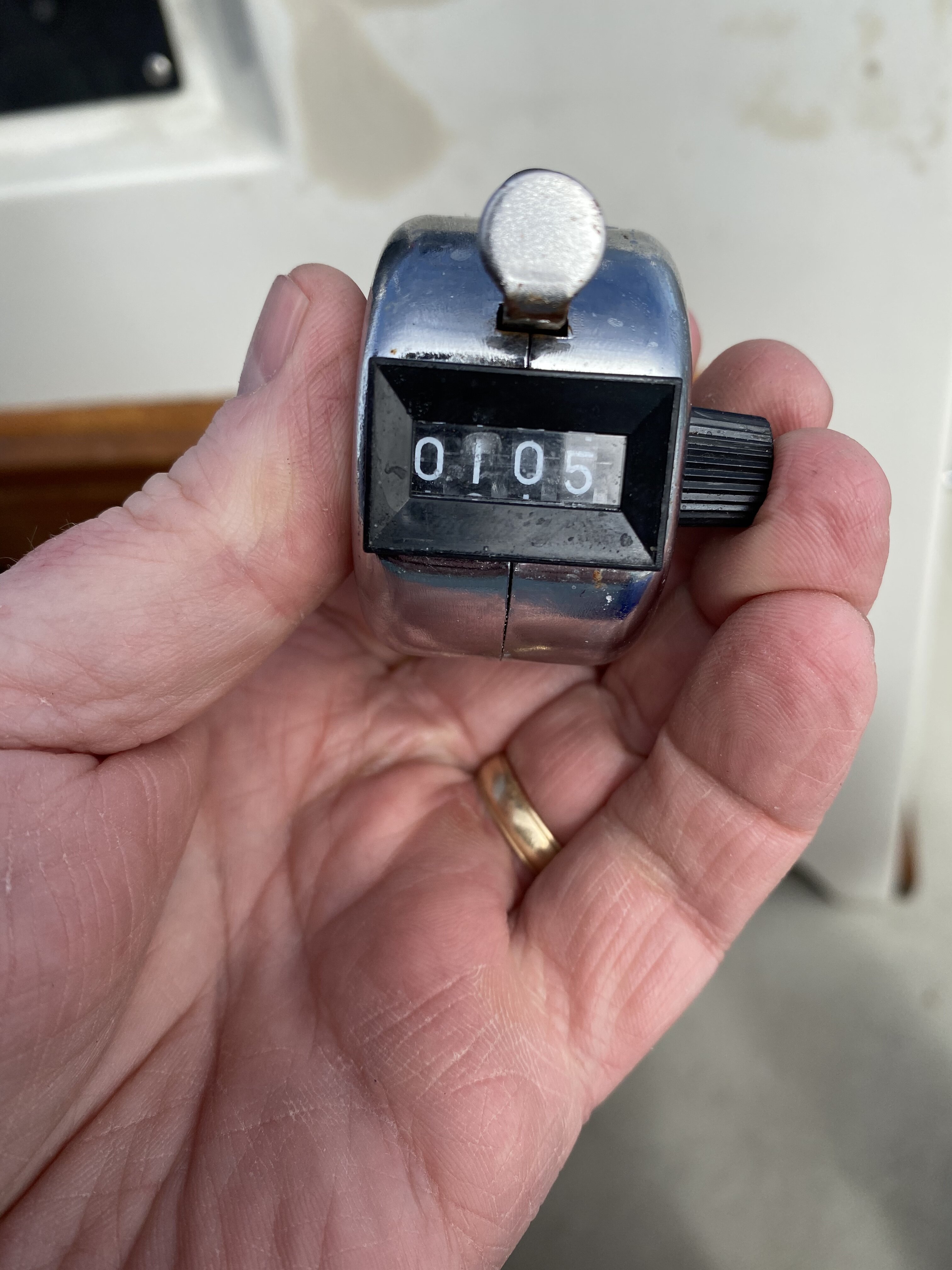 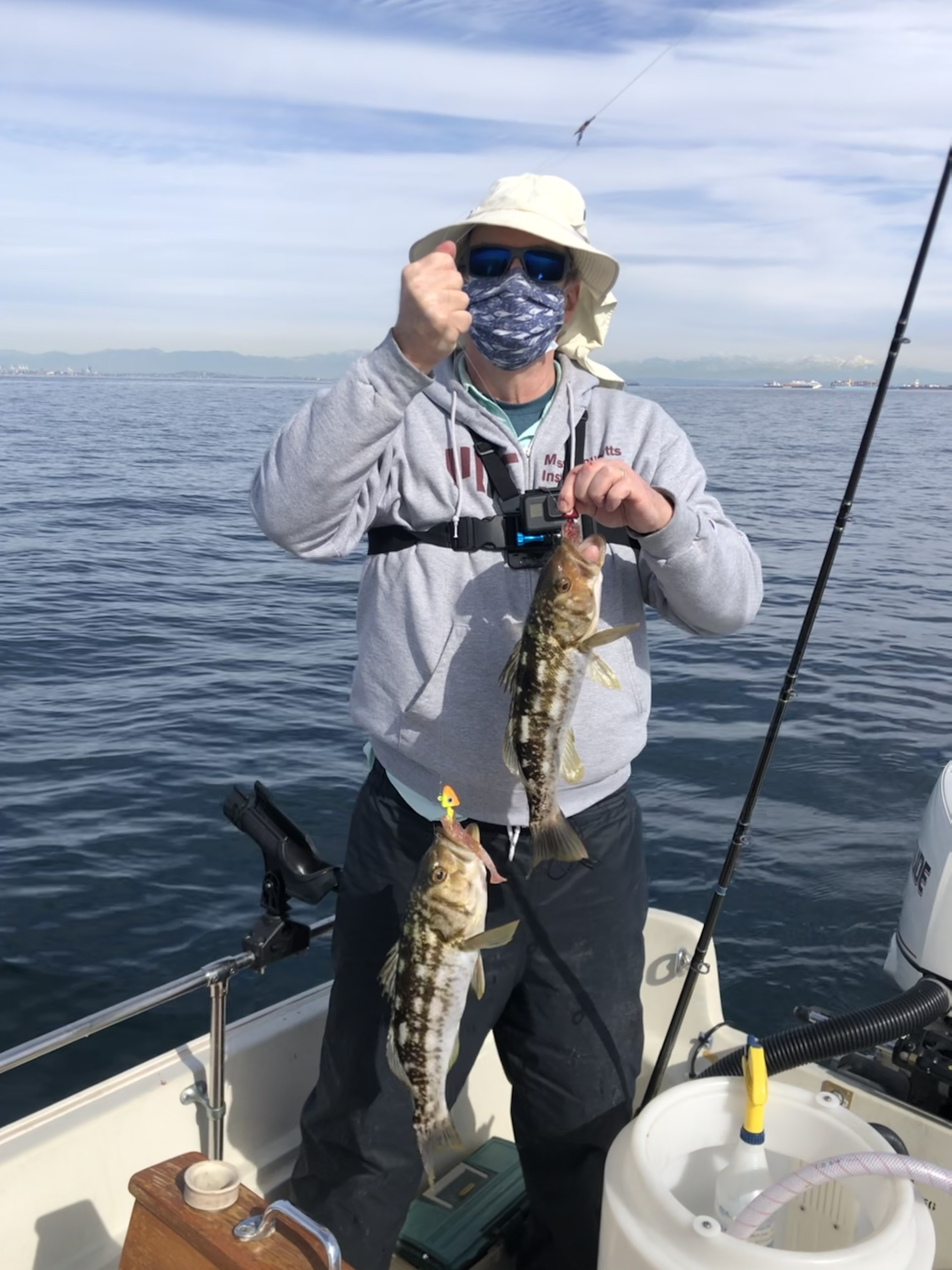 Enough of the fish pics, let's see some screen shots with the new ducer.
Reactions: mhanson59hb, dalurker, pacificscout and 2 others
Upvote 0

Way cool.
I like the swivel setup double rig.
Upvote 0

Actually, I’m going to abandon that setup for the double trouble rig because when you get into big fish they fight against each other and can (and will) break the line. Instead of using a 3-way swivel, I’m going to use 2 regular swivels. The main line goes through the first swivel and attaches to the second. Then those swivels are connected to different length leaders. The first swivel is “floating” on the main line like a sliding sinker and now two fish can’t pull against each other as much.
Last edited: Jan 31, 2021
Toggle signature
Whorehouse Piano Player
Upvote 0

dktool said:
Enough of the fish pics, let's see some screen shots with the new ducer.
Click to expand...

Steve has the screenshots, so he’ll have to post them. 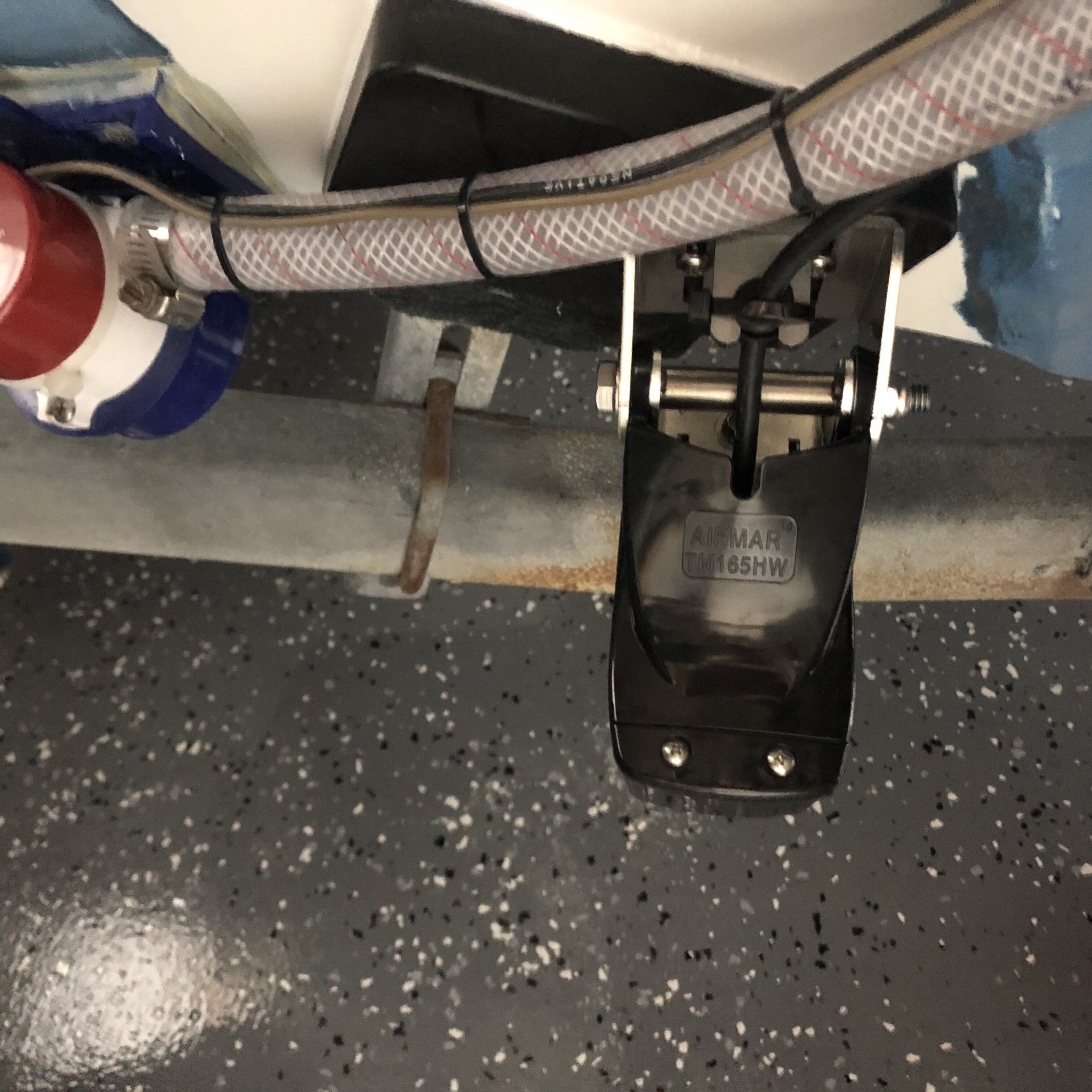 pics of the split screen too!
Upvote 0
A

Thanks for the report, going out Monday. Hoping for some of what you got!
Upvote 0
J

Why are you 2 monkeys wearing masks out in the ocean?
Reactions: Tim1962
Upvote 0

You did a lot better than I did out there! great post and great boat

I believe I saw you on my way in. I was in my montauk with the Yamaha 70 in Alamitos bay.
Upvote 0
S

here are some screen shots from my mfd. 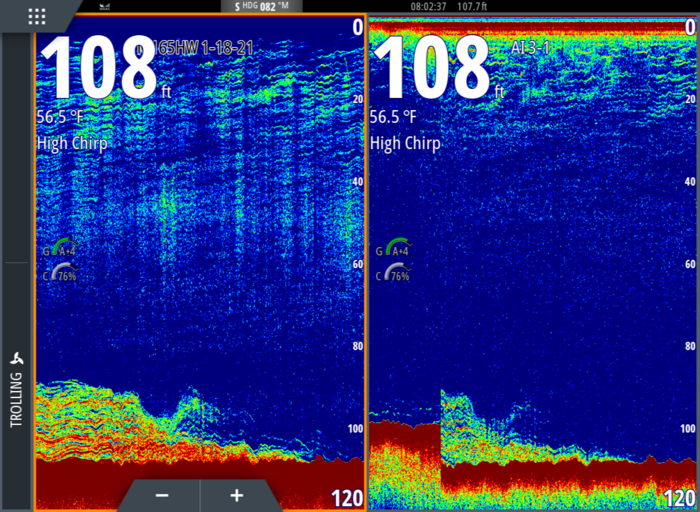 the abrupt line on the right side is where the 3-1 was activated. but you can see the little hook is greater on the left vs the right. 165 on the left, 3-1 on the right 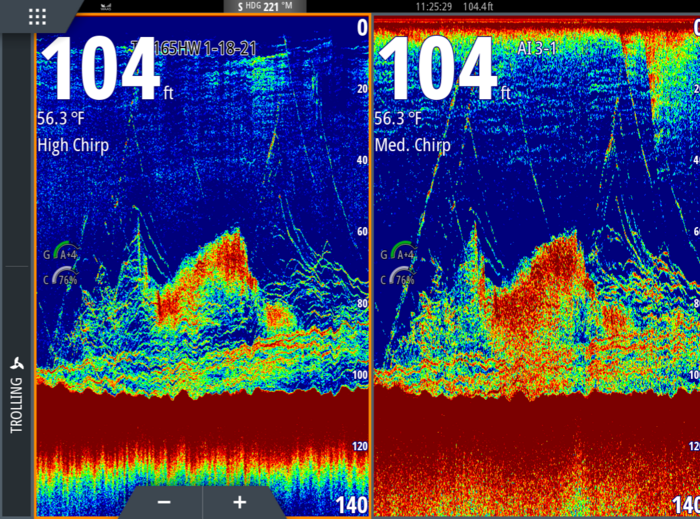 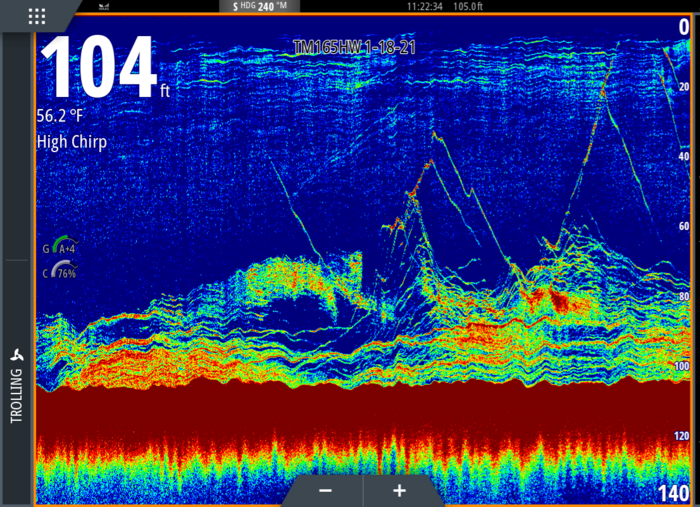 You really stumbled onto a pile of fish there
Upvote 0

The clicker does not lie. Great job, Gents!
Toggle signature
Go ahead, make my day...

Good job on the local bass. Love the screen shots. How do I go about getting some of your k man plastics?
Upvote 0

Love it, you guys have too much fun. Thanks for the screenshots of the sonar too. Congrats on a fun trip!!
Upvote 0

Double trouble rig!
I think it will cost me two jigs at a time!
At Izors, one tap is a rock two taps is a fish dong get her twisted!

Damm i need to get out and get bit!
Reactions: pacificscout
Upvote 0
H

Thanks k-man, great to hear the biting again.
Upvote 0

karlow said:
Double trouble rig!
I think it will cost me two jigs at a time!
At Izors, one tap is a rock two taps is a fish dong get her twisted!

Damm i need to get out and get bit!
Click to expand...

Great to hear there's some catching going on locally. Gonna try and get out there tomorrow for the evening bite if it doesn't get too windy. Thanks for the report!
Upvote 0

Kman said:
Actually, I’m going to abandon that setup for the double trouble rig because when you get into big fish they fight against each other and can (and will) break the line.
Click to expand...

This is why any double rig confuses me...
I understand if the 2 baits gets bit better and I definitely appreciate the numbers but are they worth it if that double digit bass or wayward plastic eating slug flatty or seabass eats one on the lighter line?..

Did you see if nacho has squid? Need some for the freezer
Toggle signature
SKIDDD
Upvote 0
L

skiddd25 said:
Did you see if nacho has squid? Need some for the freezer
Click to expand...

I was out today. Nacho had squid.
Upvote 0
Show hidden low quality content
You must log in or register to reply here.

Inshore Izors then the Shoe