Hey Guys,
Just a quick post as I am paying the piper for taking the last 10 days off.

Day -1: 1/4 of the group arrived 1 to 2 days early for the trip. Which allowed us to hook up with Mike and Alec and go out for Pizza and drinks the night before the trip. Awesome to hang out with the crew in normal conditions..ie not at work on the boat....the prior trip cancelled which is why we got to enjoy this rare privilege.

Day 1: Awoke well rested from our stay at the Ramada Inn. Worth if for a few extra bucks to have a nice hotel. I had parked my car in the lot the night prior to insure a parking space...but for some reason this year there were still spaces available on day of departure....even on day we got back which is even stranger. Met up with our fellow passengers....mostly the same old crew. This year we were blessed with some really good talent that transferred over from the previously cancelled 8 day. Jeff, Mitch, Sal etc. We left a bit early loaded up with bait....and headed off to far away places.

Day 2: Travel day. No fishing or looking.....making straight for the lower part of the ridge. Rumor was grea fishing on mixed yellows and YFT.

Day 3: Arrived at our destination. Somewhere on the lower Ridge...Thetis? The RP had been holding down the fort. First day was mild fishing. Mostly yellows with a few mixed YFT. Nothing special. The normal bait thing was working and for those on the jigs it seemed the smaller Yo Yo jigs were working a tad better than the regular 6x size. A few surface jig fish were also caught. It's facking hot and humid.

Day 4: Fished the same area and basically destroyed the Yellowtail for full boat limits. Size was on the small size (12 - 18#'s) but there were some jumbo's up to 40+ pounds in the mix. The yellowfin were a bit harder to land but they were around to in all types of sizes. Up to near 50# and down to release size. The current changed and we headed off to fish the Uncle Sam bank. I think this is where the top 2 tuna came from. Very limited action on long soak bait drifts. But if you got one it was a nice one.

Day 5: Off to Alijos with thoughts of Sugar Plums in our heads. The RP had been there yesterday for a 100! Wow! This was my day. We worked really hard for the 27 wahoo we landed today. Trolling and bombing and jigging all day long. I ended up landing 5 of these beauties. 2 on Tony the Tiger trolling and 3 on some homemade wahoo bombs. Purple and Red. Every dog has their day. This day was mine.

Day 6: Back to the ridge to work on our YFT limits. Great day with another 150+ YFT landed. They came in on all different ways. Surface jigs and bait. If you didn't get bit right away and let it soak....the yellowtail got you way back. The key for the hot tickets was feeding the bait to the fish in the chum line. 30 and 40# was working fine for this application. I had success with and without fluoro. If it was hot...cheap hooks and no fluoro...slowed down...better hooks and fluoro leader.

Day 7 & 8: Driving towards home. Fished for bait for the next trip. Caught about 5 nice Cedros YT.....30#ers in the short time we were allowed to fish. Couple kelps with some nice YT as well.

What worked .....really anything for YT. Whatever way you like to catch them. YoYo, Surface Iron or bait.....including dropper loop. YFT mostly bait...but the surface iron guys landed more than their share. Wahoo....mostly bombs...but the standard Iron worked as well. Trolling was either Mauraders or Cow Bells.

40# could have been used the entire trip for just about all types of fishing. 30# was good when the fish got touchy. I had long and short top shots set up. For me I like the 50+yards of mono with a fluoro top shot. I also fished a 7' fluoro top shot tied directly to the spectra.....but the fight was just to violent....no shock absorber sucks for me.

Top notch crew and passenger load this trip. Been awhile since I fished with Andy. Love his little Andy"isms" We will be in the "Arena" at day light....this is where you catch the fish.

Mike and RJ in the galley were top notch! Derrick, Alec, Fernando and Matt on the deck! Top notch. 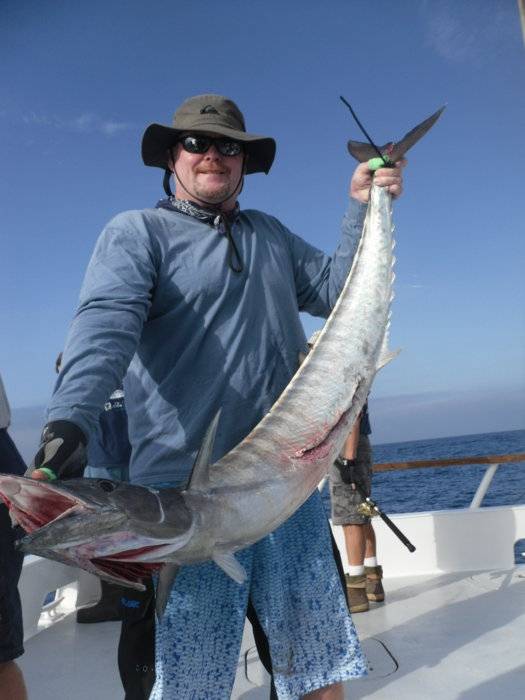 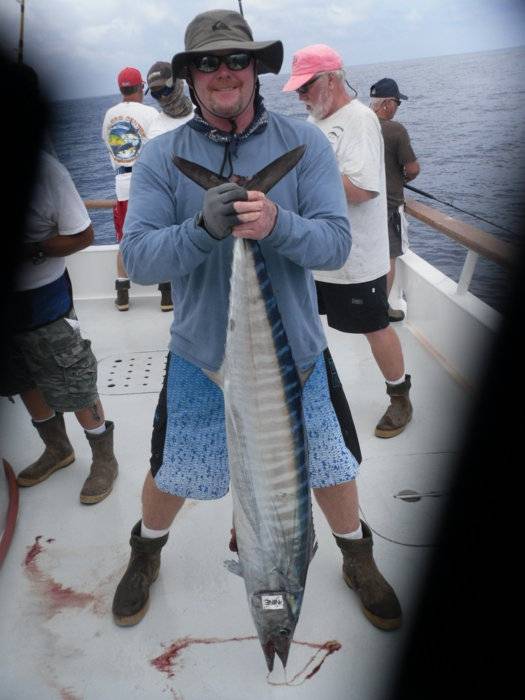 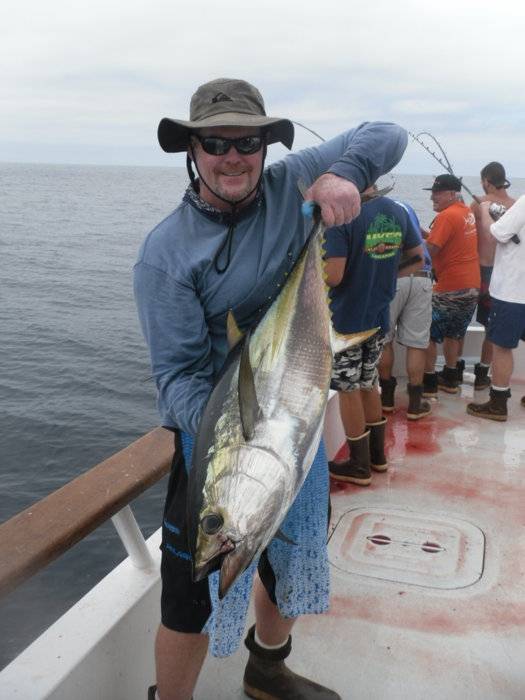 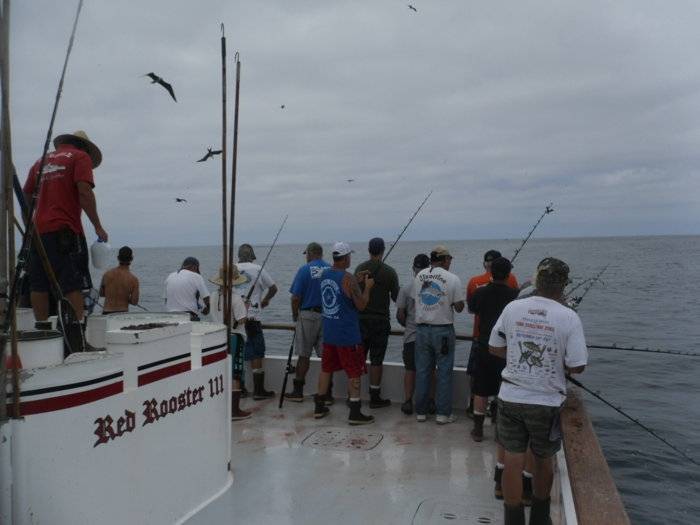 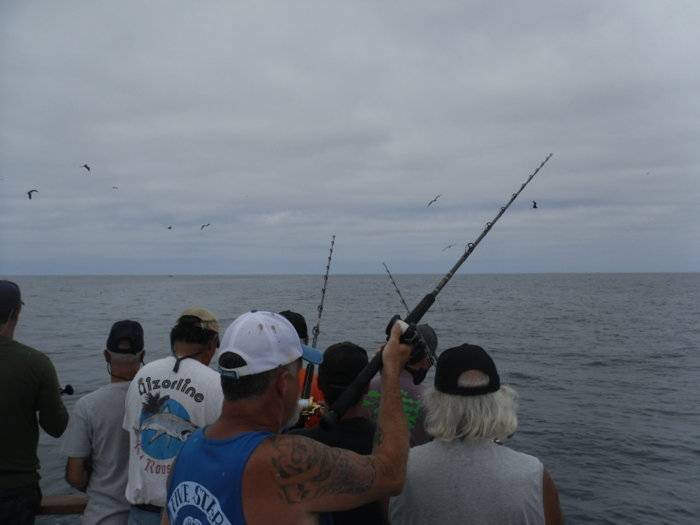 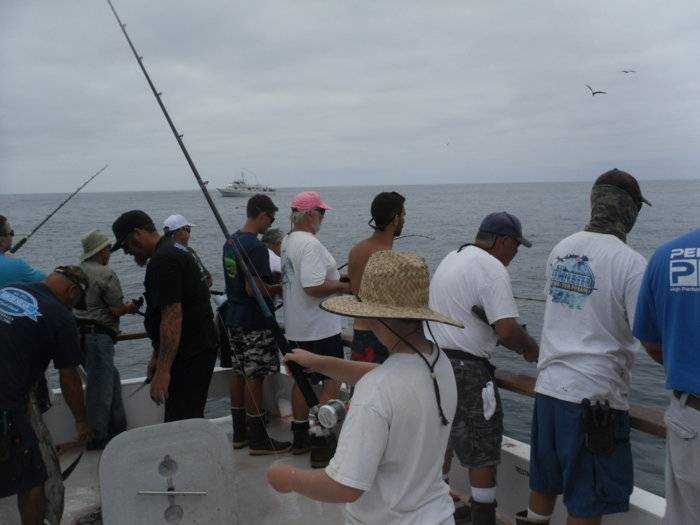 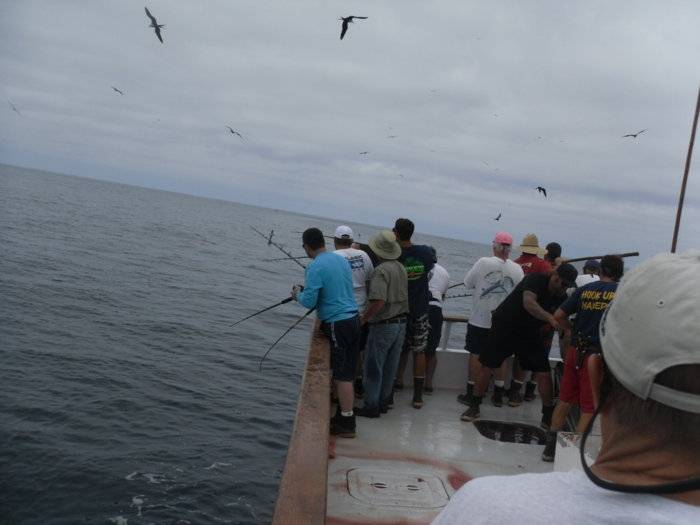 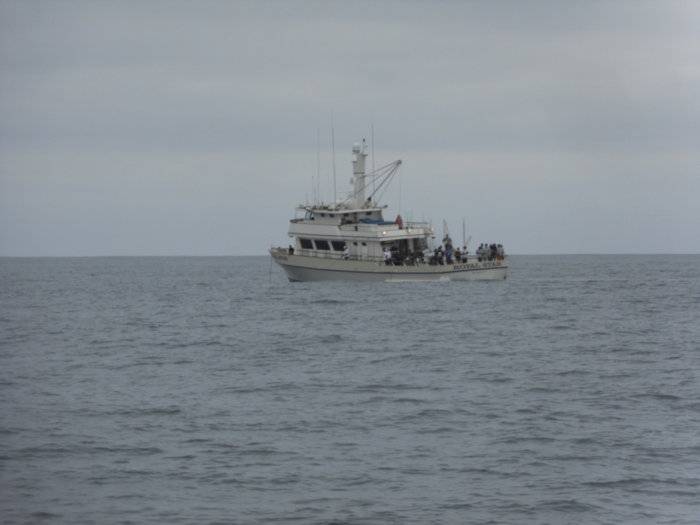 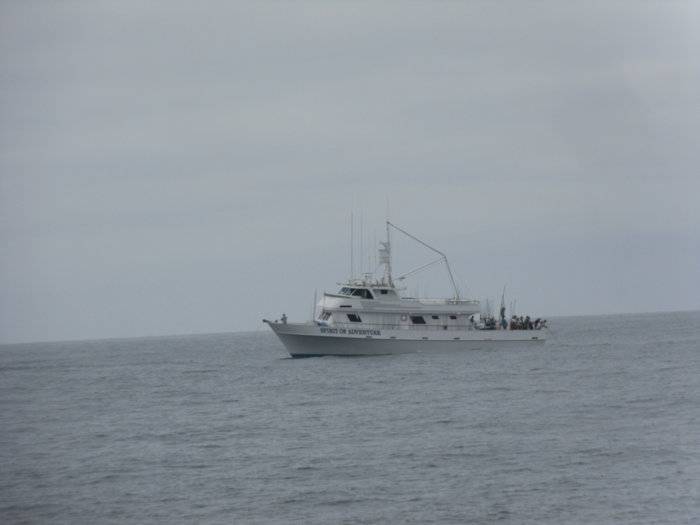 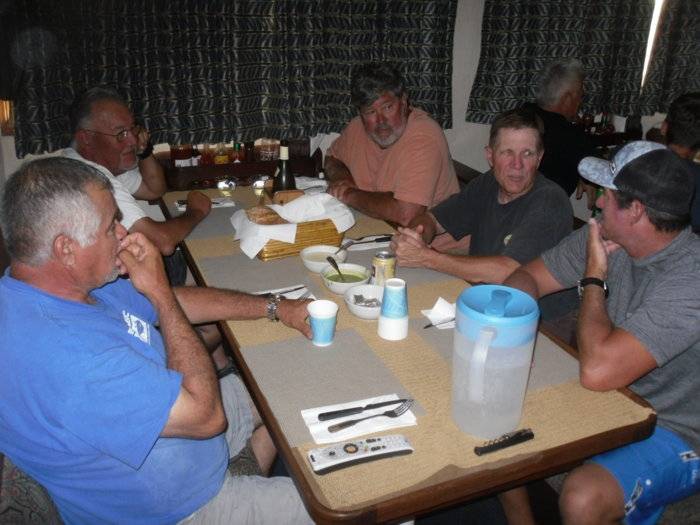 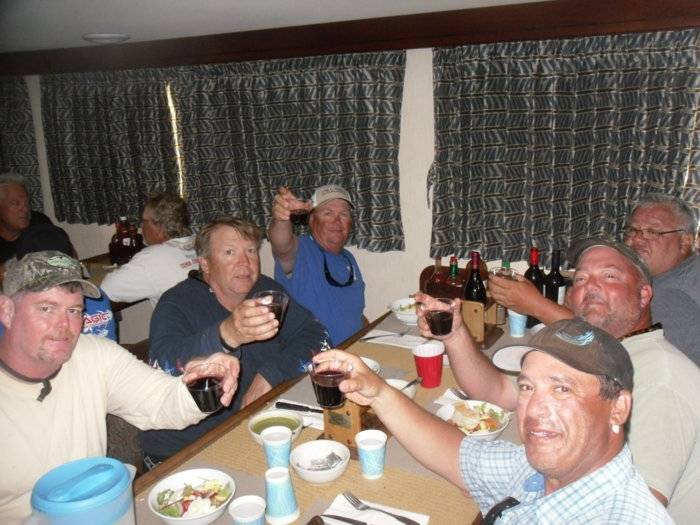 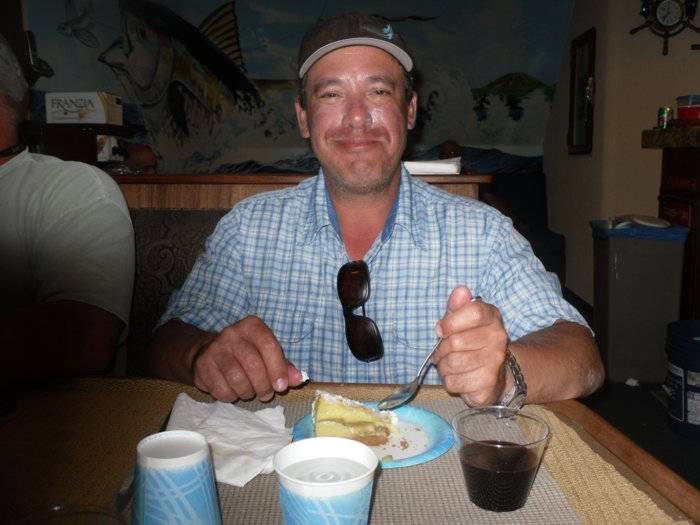 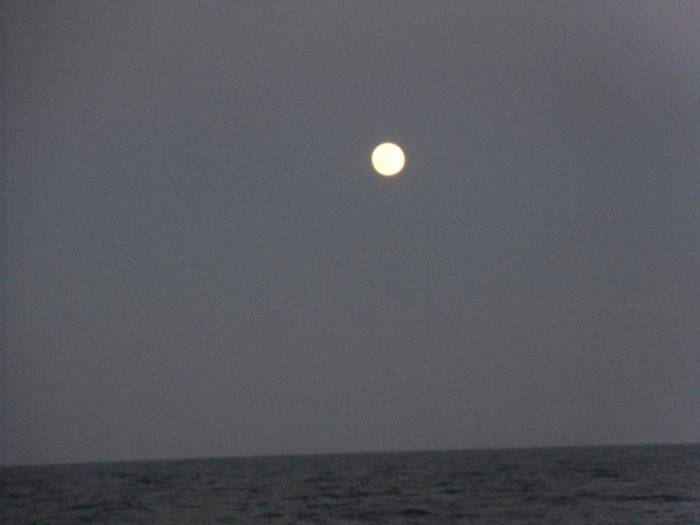 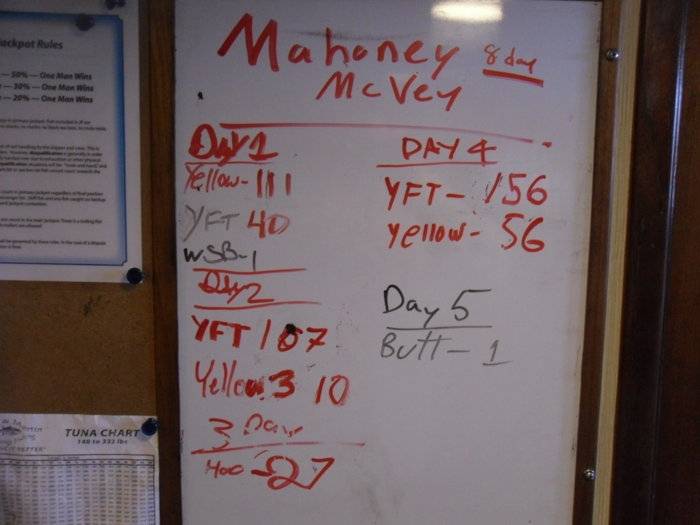 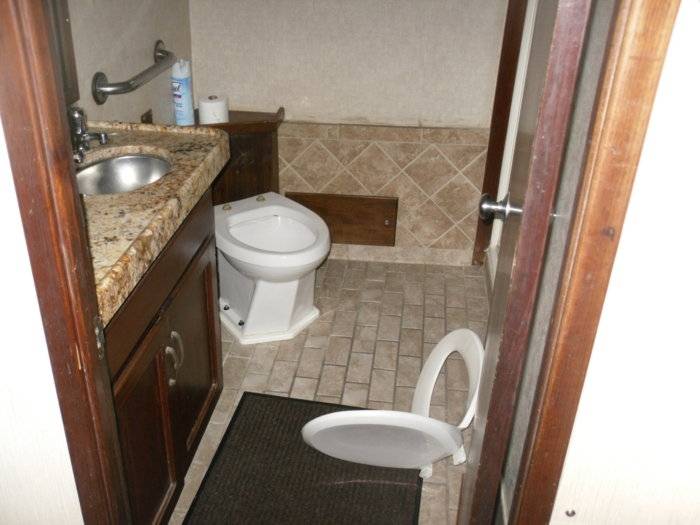 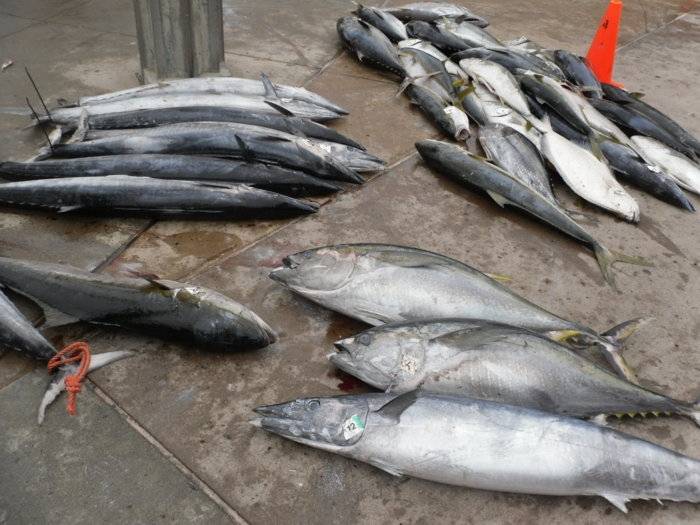 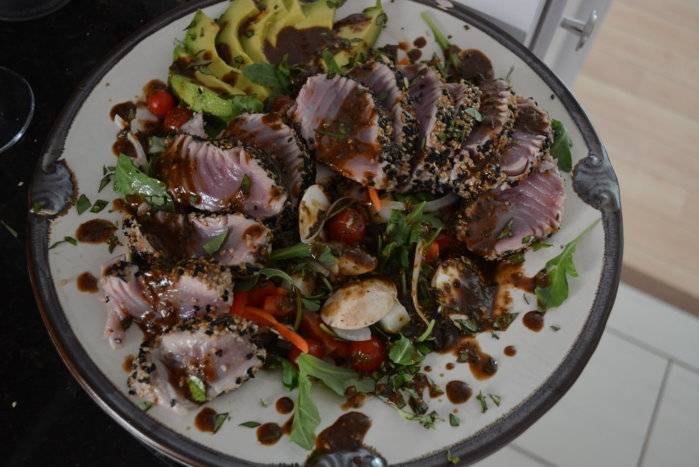 Thanks for the great report. Sounds like a huge success. Gave me good idea for my upcoming 7 day.

Sounds like a great trip all around. Thanks so much for throwing up a report. Just not enough of them these days. I'm off on a 6-day in a couple of weeks.

Your trips sounds like it was a good one! Congrats on the Wahoo and thanks for the report!

Thanks for the report. Sounds like everything worked out they way you guys wanted. I was on the bird in June. They really do have a top notch crew and Mike can cook up some great food. Glad you have a blast out on the water.

I'd rather be catching TUNA

Always exciting on the Rooster
Expand signature
I have more rods than shoes!

What happened on the shitter? Stays on the boat!!!

Thanks for a great report! Hopefully Rodless_Jim will read it and be motivated . . .

Great report, thanks for posting Dave!!!

Love the photos with the frigatebirds. Looks like they were thick at the ridge. Thanks for the report and congrats on the wahoo!

"I think that we can get another row going here! How'bout it, guys?" Thats when I stop, get a beer, and watch the fun
Reactions: hilltop, Workplacesafety and Pangamaster

Great fishing with you Jeff! Nice to have finally met you! You had great trip! Way to work the surface iron!
Reactions: Workplacesafety

wils said:
"I think that we can get another row going here! How'bout it, guys?"

Thats when I stop, get a beer, and watch the fun
Click to expand...

You know Wils, there was a couple of times I had to take your advice, bait fishing got a little frisky back there a couple of times. Good chance to have a beer, watch a little, and when everyone gos in for last call for lunch, that's when I step back in. Worked out just fine...
Last edited: Jul 7, 2015
Reactions: hilltop, Fishybuzz, Pangamaster and 1 other person

Workplacesafety said:
You know Wils, there was a couple of times I had to take your advice, bait fishing got a little frisky back there a couple of times. Good chance to have a beer, watch a little, and when everyone gos in for last call for lunch, that's when I step back in. Worked out just fine...
Click to expand...

Yup. either go fish the bow or have a beer.

Nice going Dave.
Thanks for the super report.
Congrats on your wahoo achievements too!
Glad you had a great time.
'There's Nothing Finer In Caroliner'
Expand signature
Reactions: Pangamaster

Workplacesafety said:
You know Wils, there was a couple of times I had to take your advice, bait fishing got a little frisky back there a couple of times. Good chance to have a beer, watch a little, and when everyone gos in for last call for lunch, that's when I step back in. Worked out just fine...
Click to expand...