Hi all,
I need some help with understanding what the sonar is showing. I'm here in San Diego and have a Raymarine Axiom with a basic CHIRP sonar (raymarine branded, no reference to airmar model).

Here it looks like there is fish around 35ft. The arches are pretty defined and look typical for a fish on a FF. 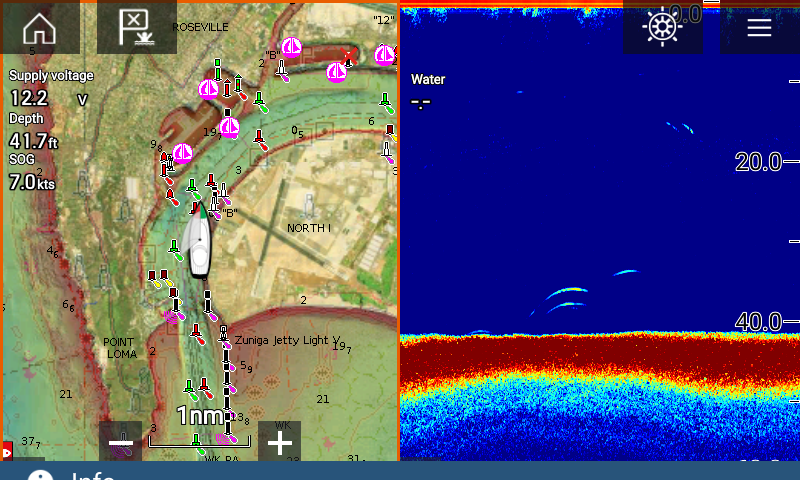 This second one is just off Point Loma, turning west as you are exiting from the channel to SD bay (as if you are going to be heading up to 9 mile). It looks like a school of fish, but....is it? Does kelp or something else produce similar returns? 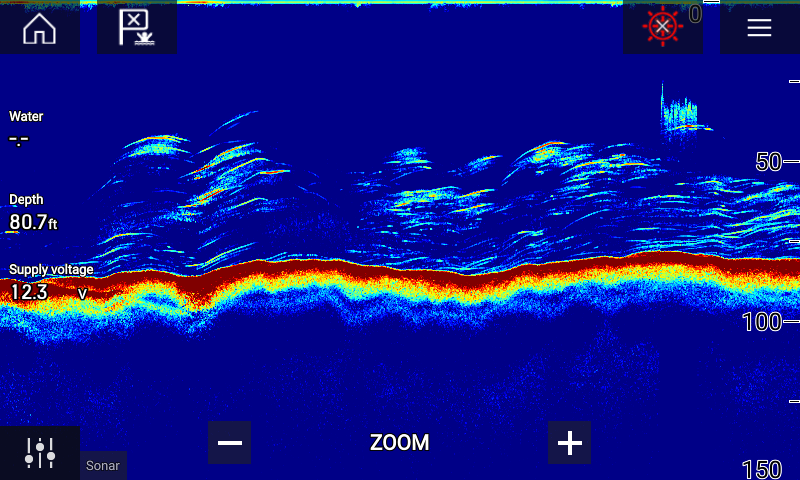 Lastly, this third one just puzzles me - this is very shallow water, moving maybe 2-3kn. As you can see it shows a ton of noise all the way from the surface (transducer location) all the way to the bottom). I was looking into the water and did not see anything at the surface. What in the world could this be? 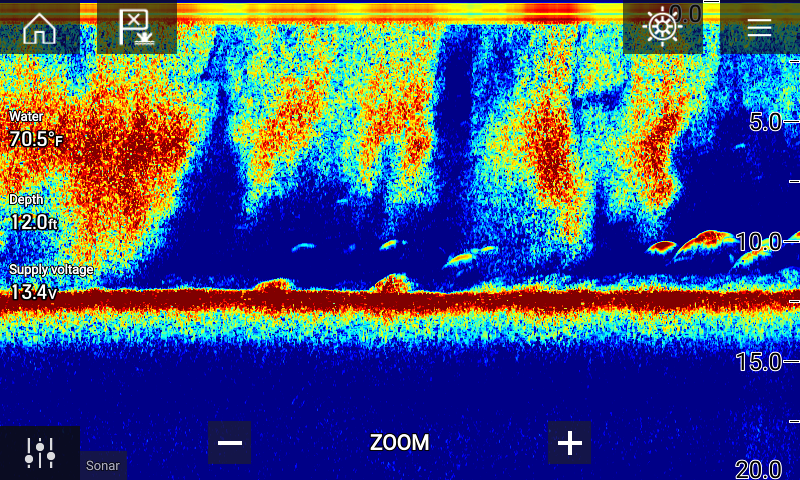 The arches are fish. The last pic is just interference/distortion. Turn sensitivity down if you're really hunting that area.

You should be switching between standard and Chirp so that you can see fish and structure. When inshore fishing, it's typically more important to fish structure as opposed to seeing fish arches. Structure tends to always hold fish even if you're not marking them.

Offshore, it's all about fish arcs. Cuz it's mostly empty out there, so if you see arcs in the open water, throw everything you got.
Reactions: fishgrappler and gettingbentwithbo
Upvote 0

When you say standard, do you mean like 50khz or 200khz single freq. mode? This particular transducer is high-chirp only, no way to adjust mode. I usually look for structure by using relief shading.

I don't have a screenshot from my own unit, but it looks like this essentially 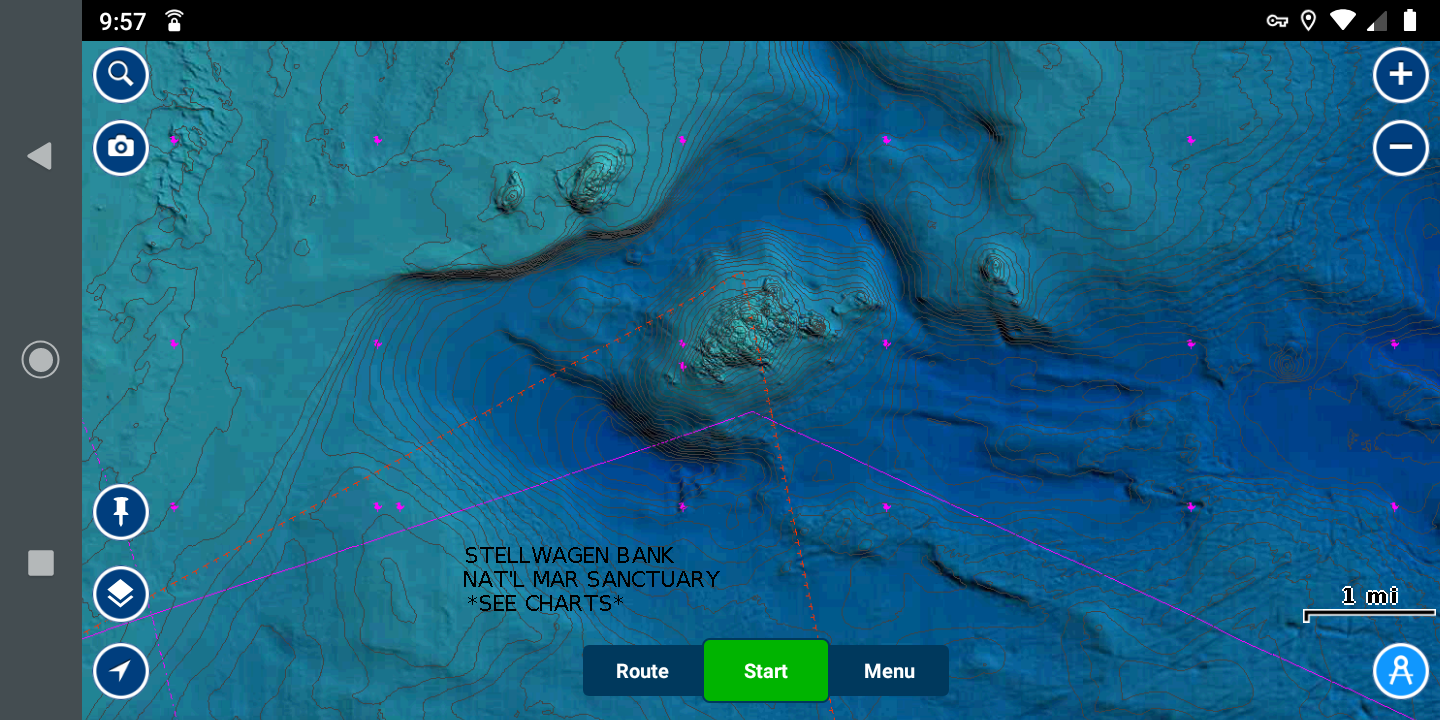 What you see on your screen is very good already. On the first picture, you actually need to turn your gain up until you see a little bit more noise. Once you see the noise, you can turn it down slightly. The same with the second screen shot.

On the third picture, you are fine too. You can turn down gain slightly, but the colors you see is because you are in shallow waters. You are only in 12 feet of water, so the noise is probably from the surface turbulence caused by your prop. In this case, you can turn up your TVG gain if your have a Simrad/Lowrance unit. There may be an equivalent setting for your Raymarine unit that does the same thing. It clears up any surface clutter caused by noise near the surface.

Make sure to set your ping rates at the maximum speed. The more pings, the more sound you put into the water to get clear images. In the old days, the ping speed needs to be lowered in deeper water because the depth range is limited to the time in between each ping. However, with Chirp, the sound energy sent into the water has a "shape" signature that the sonar can identify later. The sound is sent continuous, but they change in frequency. The the sweep rate and frequency is adjusted by the computer to make a unique signature that can be identified by the computer to form the images. If two pings from the Chirp transducer came back from earlier transmissions, the sonar can still tell which pings came from which time even though they came back at same time. With single frequency sonar, it would not be able to tell the difference because each ping is the same. For that reason, you need to set ping speeds relative to the depth or time it takes to get signal back. With Chirp, set it max ping speed and never touch it again.

I think your fishfinder is perfectly fine. The sonar returns are great and you have good images. What you need to learn how to read is the bottom hardness. Fish likes to be be near structure and generally that is a hard bottom. If you see kelp or other structures, it would be very obvious. It would be connected to the bottom. If you are in an area with a lot of kelp, it would look a lot similar to the third picture.

Here is a series of lessons on how to read your sonar:

Thank you, I appreciate the information
Upvote 0

I see very little noise in the third pic. Something real is generating those returns. I suspect bait or krill, but it could even be heavy plankton. The thing is, you are in such shallow water, it doesn't take much to reflect a relatively large amount of energy. If your FF has a TVG (time varied gain) setting, that is the thing to adjust. -- Time varied gain give more gain, usually on a logarithmic scale, to compensate for further objects, since their returns are so weak by the time they get back to the transducer. Conversely, close objects have very strong returns by comparison, so get much less gain. If you can't adjust TVG on your FF, you may need to just turn down gain in shallow water. Look at the strength of your bottom echo and adjust accordingly.
Upvote 0
S

Yuri_SD said:
Thank you, I appreciate the information
Click to expand...

FYI. Raymarine decided that their users won't be able to understand the term "TVG" (even though every other system uses that term). For your fish finder, its called the "Surface Filter" or SF in short. For them, its an inside joke. The acronym stands for something else and you don't want to know what it actually means.

One thing I learned from 3 boats ago: every sonar has its own "personality" in how it marks fish especially when underway.

Learn how to read "a mark" when you're searching offshore. Once you know what a mark looks like, even when you're going 15 - 20 knots, you can discover schools of fish you never knew were right by you (aside from surface and air clues obviously). I will randomly stop the boat and announce that we've got marks, but to the random observer, it just looks like striations or snow until I stop the boat and we're idling or trolling speed.
Upvote 0
Show hidden low quality content
You must log in or register to reply here.