I didn't know him well, but shared a rail with him a few times. Really a great guy, always smiling as I remember him. Always generous with his knowledge. His reports and his enthusiasm will be sorely missed. 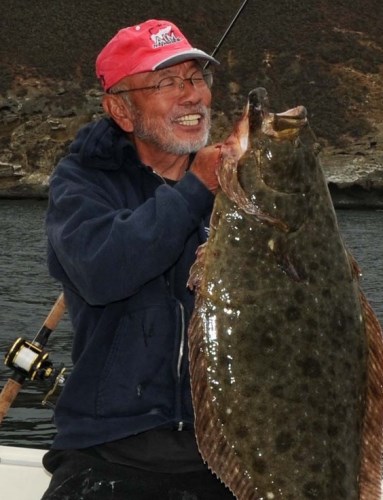 Harry Shin Okuda, DDS
June 28, 1934 - November 26, 2020
San Diego
Harry "The Fishing Samurai" Okuda, age 86, passed away peacefully on Thanksgiving afternoon with his loving wife Lan at his bedside. Harry was born in San Francisco and raised in Pasadena.As a child, he spent two years at an internment camp in Gila Bend, AZ, during World War II. During his time there, he made friends with fellow Native American children and ran off daily to go fishing, hatching a life-long passion in the sport, which was further cultivated during fly fishing trips to Idaho. While not built large, young Harry was speedy and starred as a running back for his Monrovia HS football team that took home the CIF title.After high school, Harry joined the Army and was stationed in Japan during the Korean War. During his time in the military, he was randomly assigned to be a dental technician, which ultimately led Harry down the pathway of wanting to become a dentist. After taking college courses during his service, he finished his studies at USC, at which point he was accepted into Northwestern University's School of Dentistry. "Uncle Sam" helped pay for Harry's education with the GI bill, where he also became known as a bit of a card shark playing poker every weekend.In 1960, after finishing dental school, Harry skipped graduation festivities after learning he had passed the CA dental boards and set up his shingle in Huntington Beach and later on in Pomona before moving to Moreno Valley. At one point, while attempting to sell his practice, a young dentist by the name of Lan Tran came to consider the opportunity. While passing at first, Harry called Lan out of the blue one year later, asking her to help him with his practice. This ultimately led to Harry and Lan's joint dental practice venture and culminated in Harry finding the true love of his life. After 10 years of a successful practice together, Harry and Lan moved to San Diego in 1994, where Harry retired and Lan kept a busy dental practice going.Harry was an accomplished and decorated saltwater angler, having won many tournaments and angler of the year awards from the multitude of clubs to which he belonged. No fish have swum without fear of being caught by Harry. From casting iron to barracuda on the local half-day boat, to catching albacore and seabass or fishing for marlin with his wife Lan on the family trio of Alfresco boats, Harry had a passion for all types of fishing. It is one thing to be asked to go fishing as a guest, and it is another thing to be asked back a second time. Despite being an accomplished boatsman, Harry checked his ego at the door and was always a willing crew member on the Zopilote, Ken-Dan and Christina Lynn among many others. Among Harry's proudest accomplishments was his solo catch of a striped marlin and his 397lb broadbill swordfish.Always the jokester, Harry taught Lan the fishing and boating ropes and soon anointed her as "The Admiral" when she would question why Harry was driving in the wrong direction away from the fish. Several years later, Harry lost his admiral to cycling racing and renamed Lan "The Silver Fox." Proud and supportive of his fox, Harry always stood ready at the perfect corner catching his beloved Lan in action with camera in hand.Besides his love for fishing, Harry was an accomplished artist painter in his younger years, and while humble, he was always willing to show his philanthropic colors. While practicing in Moreno Valley, he received the coveted Paul Harris fellow award due to his community contributions. After establishing a foothold in San Diego, Harry and Lan teamed up with the Morris family, among many others, to help raise in excess of 3 million dollars for the Make-A-Wish Foundation of San Diego via the 25 plus year run of the wildly successful Tuna Challenge tournament.Harry is survived by his beloved wife Lan of 34 years, his son Harry Jr. from his second marriage, his brother Tsutomu, his sister-in-law Yoshiko, several nieces and a nephew. Due to pandemic restrictions and Harry's wishes deferring a service, a Zoom based celebration of life complete with fish story telling will be planned in early 2021. Details will be made available via wife Lan's Facebook page. Soon after, Harry is expected to join his friend Marty for an eternal life at sea, chasing fish.

oh my god no! one of the best men i've ever met in the fishing industry. he was a legendary angler, great friend . he created my rod wrapping business by sending me so many customers. he was my first real big time customer. he took me under his wing when we met at the old kettenburg back in '88.my future wife and i would fish on al fresco 2 for calicos when i first met her. harry wewnt to northwestern when my girls dad taught , so harry really liked her. r.i.p. my friend , you're going to be missed for sure. swyc will never be the same.
Reactions: I hate seals
Upvote 0

Knew of him, but unfortunately didn’t have the chance to know him. Always a sad moment when the fishing community loses another great individual. RIP.
Upvote 0

ITS ALL ABOUT THE HUNT

I was lucky enough to share the rail with him as well. Such a great guy. You will be truly missed by all. RIP HARRY O
Toggle signature
ITS ALL ABOUT THE HUNT !
Reactions: I hate seals
Upvote 0
T

Never met him but read about his many adventures. He was a fishing machine.

Wow, one of the great ones. Rest in peace Harry O.
Toggle signature
At first I was like "Whoa." And then I was like "Whoaaa." But now I'm just like "whoa".
Reactions: I hate seals
Upvote 0
Show hidden low quality content
You must log in or register to reply here.

Inside LA Harbor and the Catch of a Lifetime