Just got back; hopefully others who were aboard will also chime in.
After Ensenada check-in, spent a day traveling toward the island with no catches made.
Arrived in early morning dark, and caught some nice yellowtail from 30-45 pounds on dropper loop.
As the sun came up, very good-grade yellowfin tuna started to bite, primarily 60-90 pounds, plus a handful of small-grade yellowtail.
The second day saw more of the same, though a slight relocation found some even better grade tuna, mostly 70-100, plus a couple of standouts that were 150-plus.
Third day was again the 70-100's, with a few 40's, and some 15-25 pound yellowtail on yo-yo jigs for those who wanted them.
The tuna bite was never wide-open, but 1-5 fish going was a regular thing, due to the tax rate, 80-pound tackle was essential.
Standard rigging was a PENN Fathom/Torque 40NLD2 filled with 80-pound braid, and a 100-foot topshot of 80-pound mono. Fluorocarbon was not needed, but the fish were a bit hook-shy, so a 2/0 J-hook tied straight to the 80-pound mono was the default setup.
Sardines were the main bait, but small greenback mackerel that we caught there also scored some bites.
Weather was pleasant, with a nice breeze when fishing tuna on the lee side, but rough conditions on the weather side of island prevented us from exploring for larger quantities of yellowtail.
Congrats to Steve Abeyta for his jackpot-winning 159-pound yellowfin [caught on one of the "demo" rigs].
The food and crew of the Vagabond were outstanding as always, and fishing with Captain Mike Lackey at the helm is truly an exceptional opportunity to learn.
Last edited: Aug 3, 2021
Toggle signature
"The best kind of fish in the world is the one on the end of your line"
Penn Pro Staffer
Reactions: Warlord, mmayo, Fry and 20 others
Upvote 0

Great report, short and to the point! Congrats on a great trip.
Upvote 0

Thanks Steve, great report and useful information! Hopefully I will get a crack at those tuna at the end of the month. Interesting you didn't need FC leader, been fishing bluefin too much I guess.
Upvote 0

Congratulations to Jackpot winner Steve Abeyta, who scored a monster 159-pound yellowfin on the trip.
He was using a "demo" rig consisting of a PENN Fathom FTH40NLD2 reel on one of the upcoming PENN Carnage III "west coast series" rods.
I was hooked up myself when he landed his whopper, and so I could not get a pic! 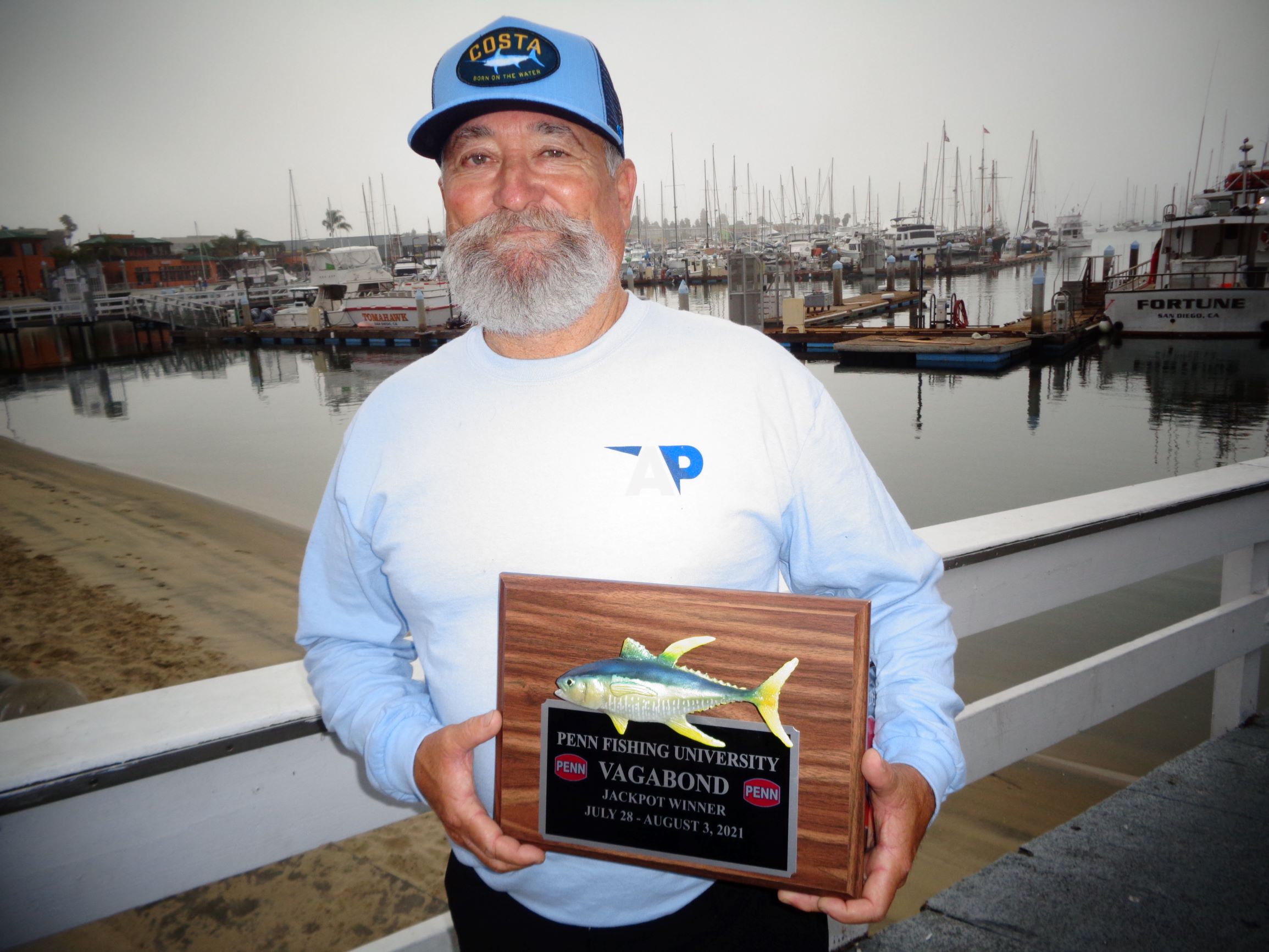 Toggle signature
"The best kind of fish in the world is the one on the end of your line"
Penn Pro Staffer
Reactions: terryc. and kbray001
Upvote 0

Fred Uno had the second-biggest tuna of the trip, a massive 151-pounder, caught with his trusty PENN International 16VISX.
Apologies, I also did not get a pic of that monster.
Here is Fred with another "nice one" that he caught on the Vagabond trip. 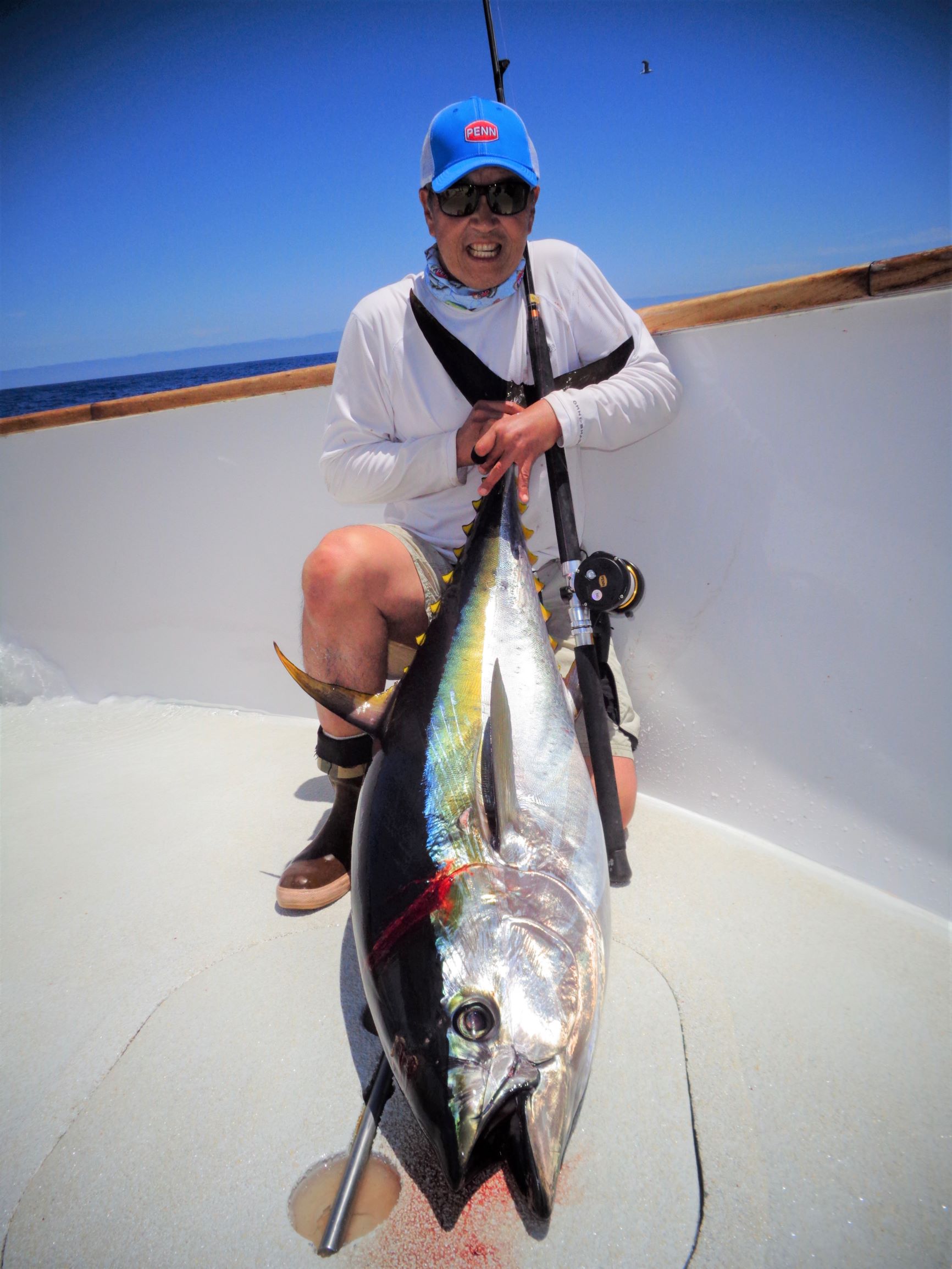 Toggle signature
"The best kind of fish in the world is the one on the end of your line"
Penn Pro Staffer
Reactions: mmayo, kbray001 and fishin_kid
Upvote 0
R

Thank you Steve for sponsoring our trip again and to the outstanding service we always get aboard the Vagabond from all - Captain Mike, crew, and cooks. Our cook Jojo got his personal best YFT this trip - over 100 lbs easy.

I am still unpacking, licking wounds, and making cevivche & poke now. Looking forward to next year and just sent Mike my deposit. For others wanting in, think the trip will open in about a week for those who were not part of the trip this year. Nathan & Tony, we missed you ! Same to Doc. But we had 3 new people, who had been trying to get into this popular trip for 3 years, who had a great trip and a taste of Lupe. Joel, Brian, & Alex if I remember names.

Info to add to what Steve said.
No floro for 80 lb or above as it just adds in one more connection that could go wrong on the bigger fish ( as per Capt Mike Lackey). First day we were using 40 to 60 lb outfits w/ floro as the bigger YFT had not entered the picture yet. Same with the taxman so lighter line was a possibilty.

We also had a few spanish macs and fish were caught on them ( I got one). They tend to swim slowly at first thus would hang out in the "close to the boat" bite zone longer. But then would swim out into the longer soak range.

If you hook the bait ( mac or dine) in the nose or neck, slowly wind the back like trolling as a number of fish were also caught this way.

Big thanks to Jeff Squire of ONE COOL TUNA who provided many things including his new drag stickers. Can not say enough about using these to mark various drag settings on your lever drag reels. More than a few fish were lost by going to a high drag during initial run. Roughly 30% of line rating is your drag to use but AFTER fish has done its first 2 blistering runs. So set about 15% of line rating drag marker to use initially for the first runs to avoid pulling hook or breaking the line.

At initial hookup, some would watch the line peeling off and the spool starting to empty some. They would get nervous thinking they were being spooled and would tighten the drag. NO NO. Only start tightening when spool is almost empty. 98% of the fish stopped before spooling. Think we had 1 or 2 reels spooled.

We saw it many times and heard Mike saying don't do it many times. Either too strong an initial drag by pushing too hard on lever and not knowing what drag one got or they kept bumping drag up again and again during run till POP !

Then there was the "Fred's & Sam" show but I will hope others tell that story.
Reactions: James Taylor, Panic, Phishy Phil and 2 others
Upvote 0

Thanks for starting this post Steve. I will post pics later tonight of some of the great catches we got.. And Lost to the tax man.... As always, Steve you bring way to much tackle for us to use and have fun with. I will be bringing less next year and let you loan us the BEST Penn tackle..
Toggle signature
PANIC -OneCoolTuna -

So I got the pics edited from the trip. Check out the link - Penn Vagabond 2021 6 day 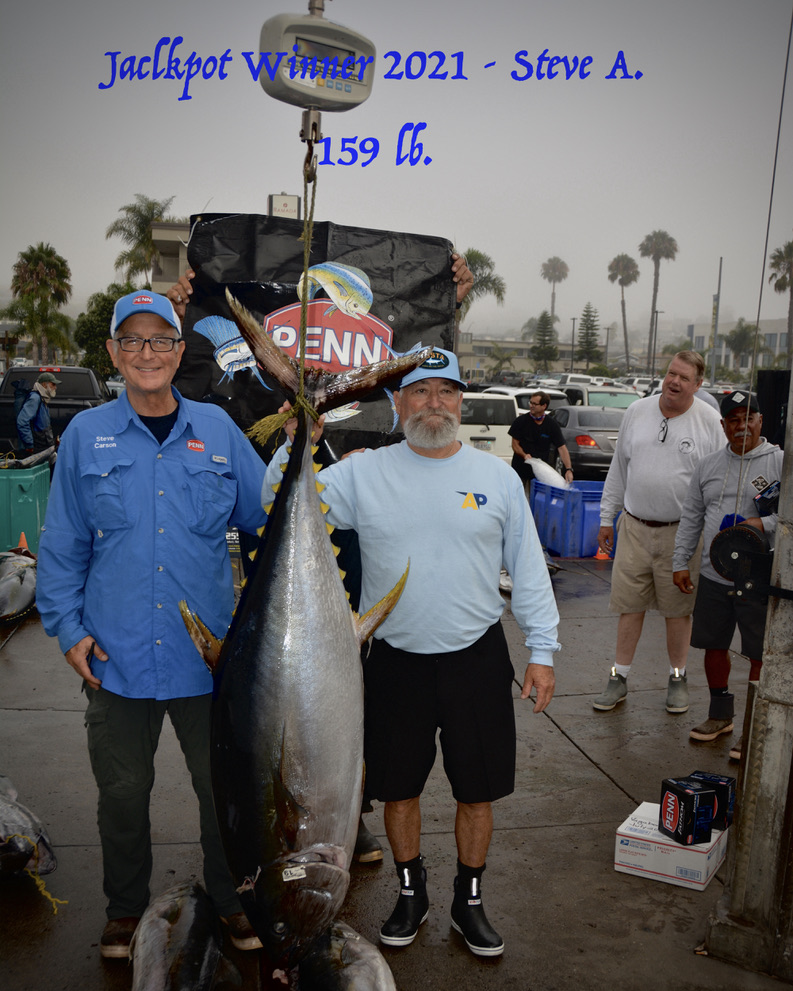