My wife's family was in town, and to avoid spending the entire day with them at Sea World, I (very generously

) offered to take the boys fishing. After some haggling, a plan was set for the adults to go to the islands with me in the AM, then come back and pick up the kids to fish the bay, then do Sea World in the evening. I knew that was going to be a bit of a hectic cluster of a day, and I didn't entirely get out of Sea World, and I didn't get to spend the day offshore by myself like I wanted to, but hey, sometimes you just have to compromise.

I launched at 4:30 at Shelter just before the crowds got bad, got bait (second in line), and raced back to pick up the guys. Bait was actually excellent. Weather was meh. A bit lumpy for these guys. Water conditions looked great, 66-67 consistently all over, clean water. Hit all the usual spots, plenty of bass and cuda at South Island and Middle Grounds, looked like there should still be yellows around but we didn't see any. I had them slow trolling deans while I drove the boat, and there definitely could have been some missed bites. I just wanted them to catch fish, which they did, and they were stoked. I also got a captain's bonus with a stud calico plucked off the Lighthouse boiler rock with a surface iron (while slow trolling past it). FYI, if you're not fishing a Starman 112, you're missing out. This thing swims like it's on crack. Love this jig. 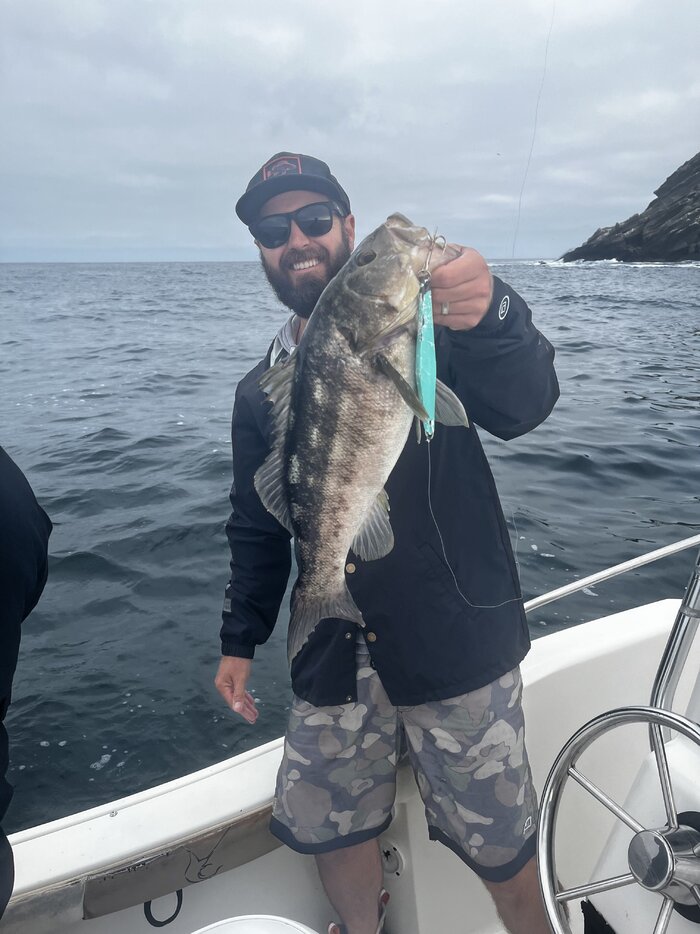 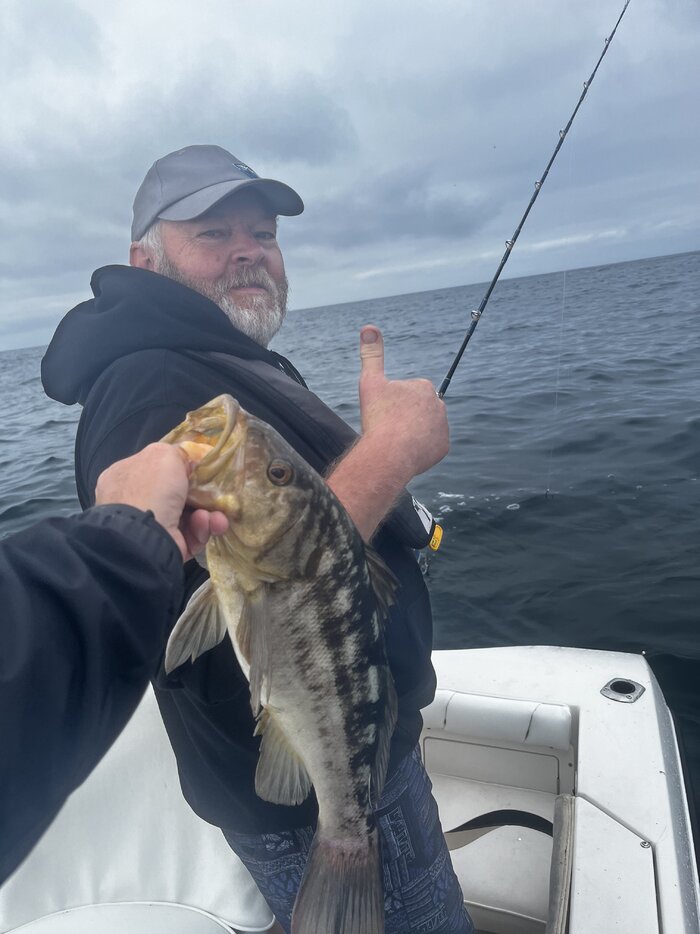 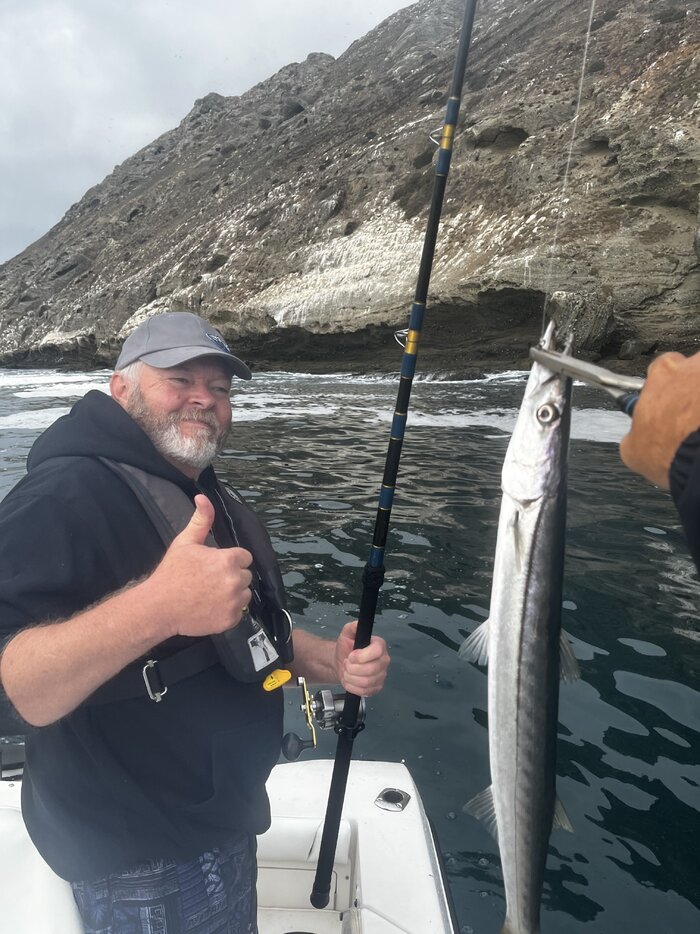 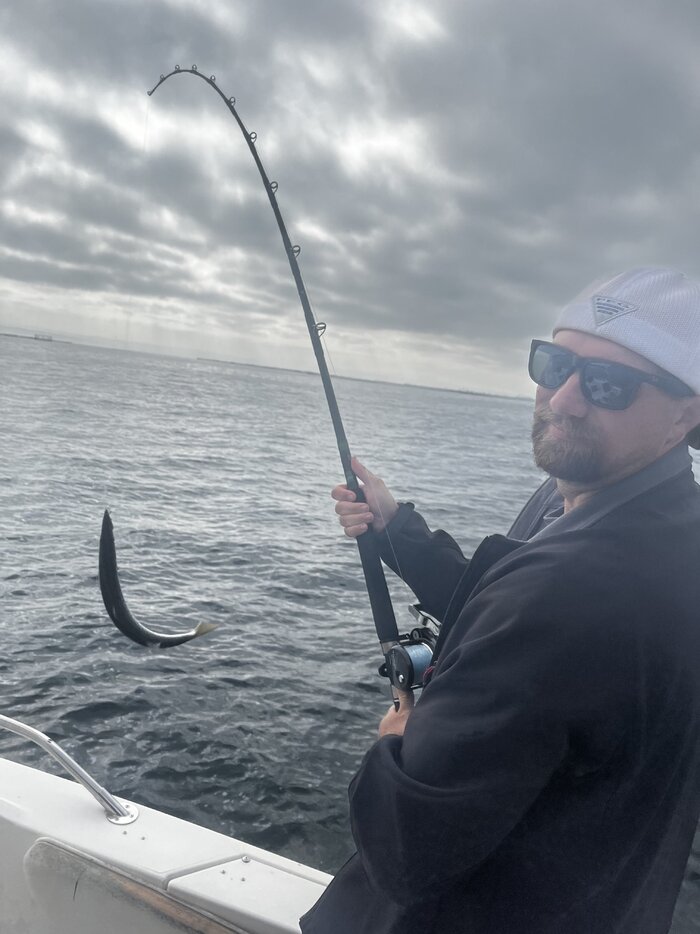 Fished from 6:30-10:30 and then boogied back to pick up the kids. Lunch went long so we only had about an hour and a half. Ran down to the bridge and made several drifts but only had a few short bites, including a nicely raked halibut bait with one of our leftover sardines. Bummer. As we were leaving my nephew reeled in a croaker that had been on his rod for who knows how long. My kid had been announcing for awhile that he was "smelling a skunk"...... I've taught him well! 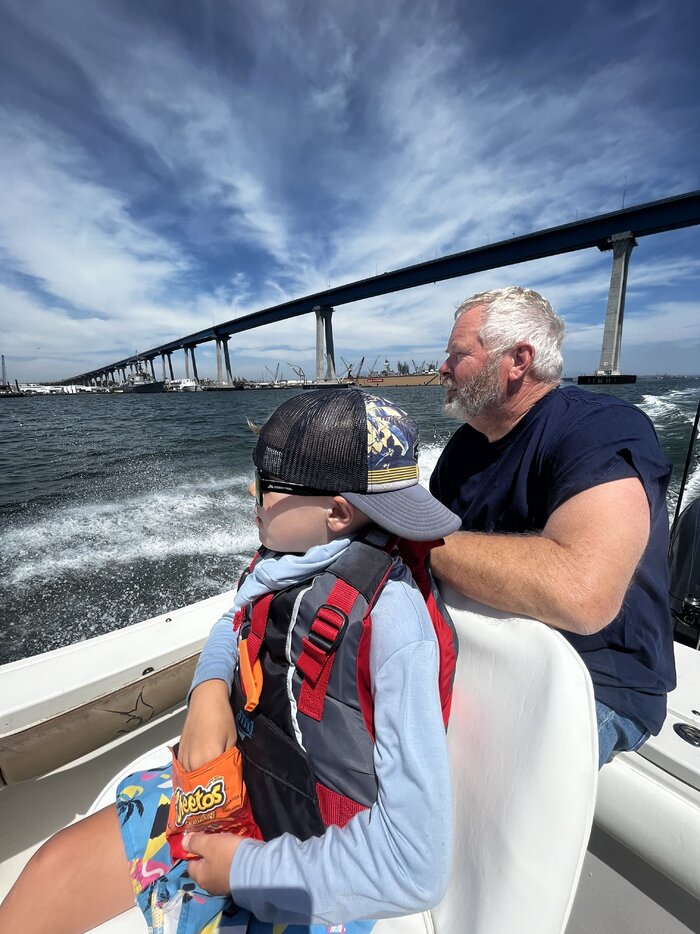 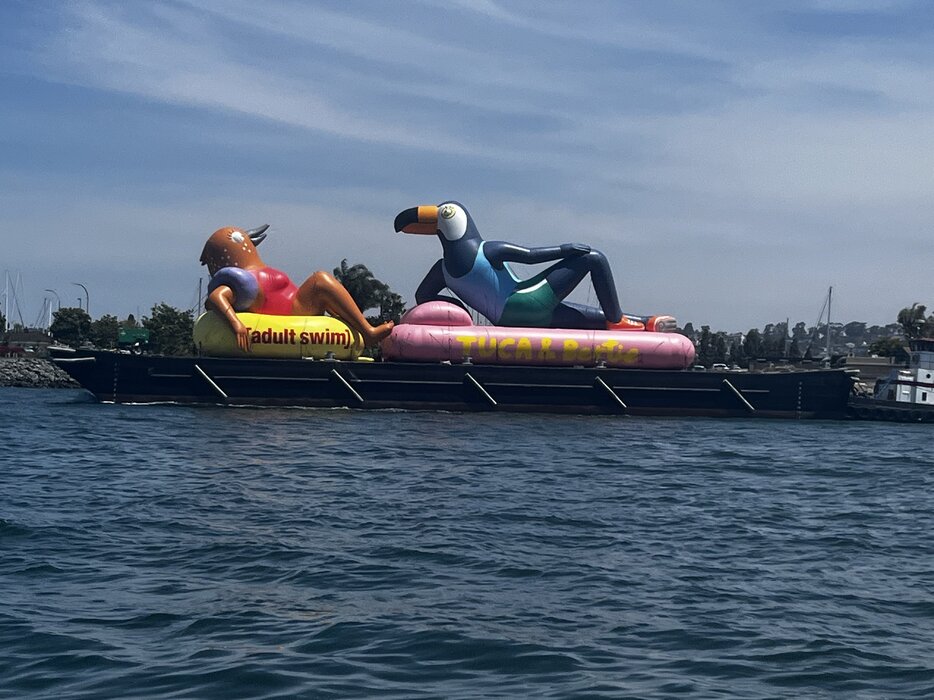 Dropped them off, pulled the boat out solo, ran home like a banshee, flushed the motor, threw my crap inside, met them at Sea World, and then got total bass-shamed in the aquarium under the bat rays. I'm not joking, this sand bass had to be 20 lbs. Pics don't do justice. It was the size of a Sparkletts cooler. I thought it was a weird grouper at first. 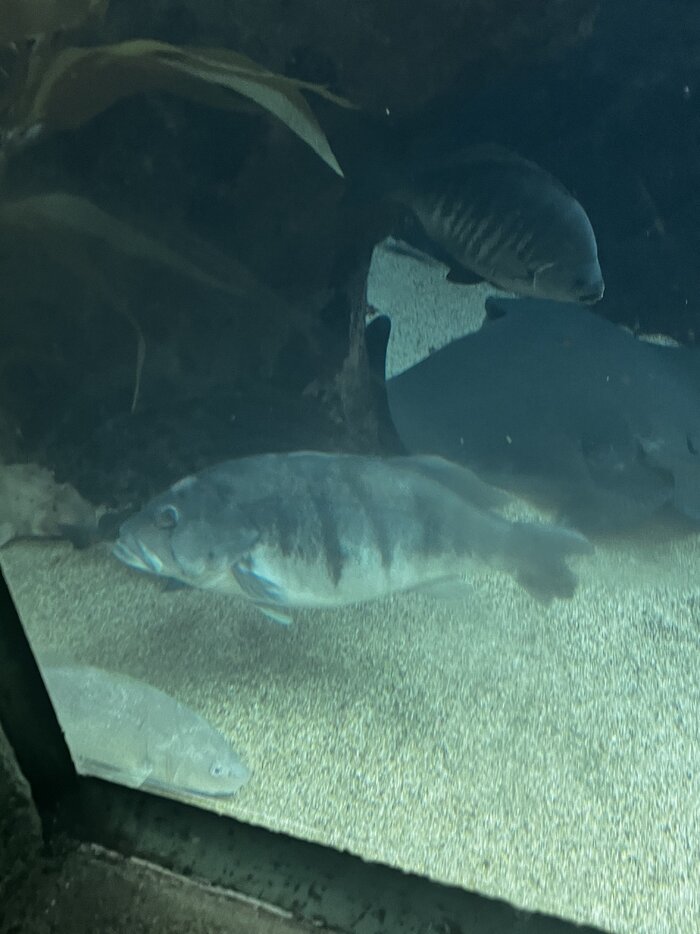 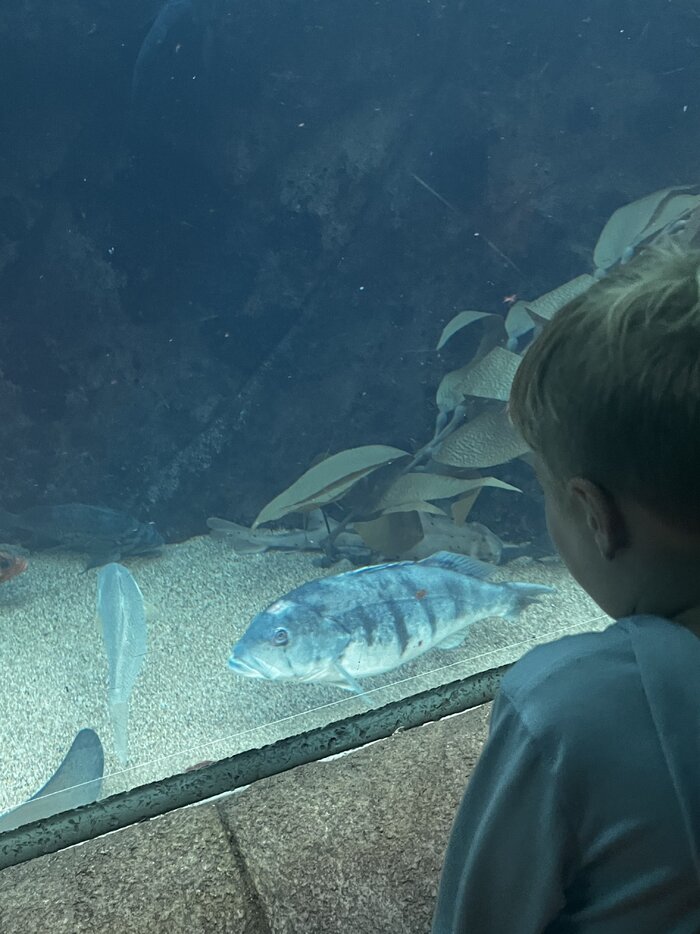 Then this weird spotty hybrid that swallowed a football. I don't know what they are feeding these things but it's gotta be radioactive. 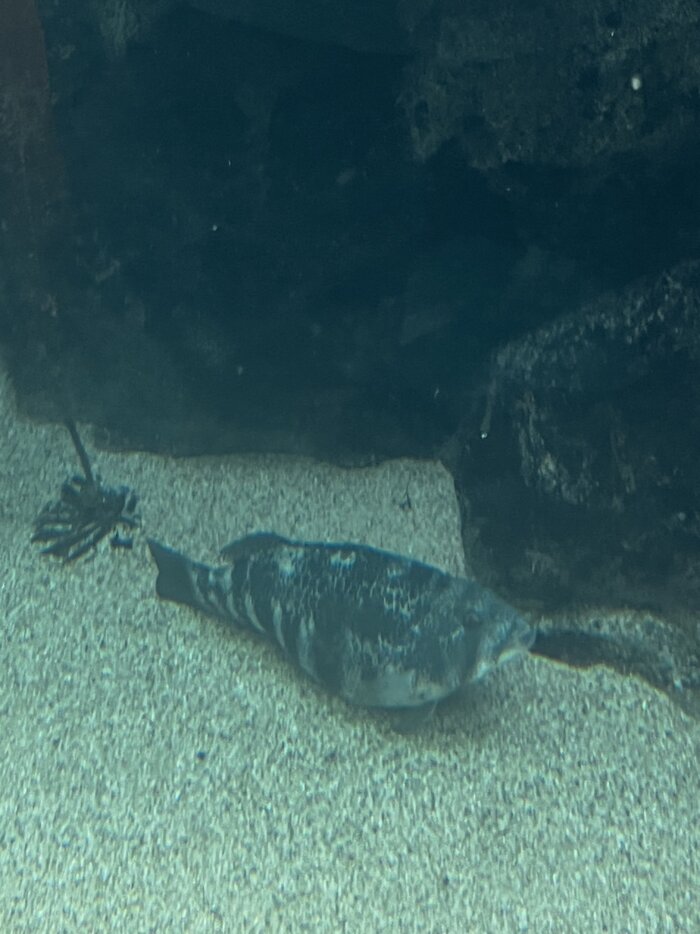 Hectic day but it was nice taking the family out and at least I got to see some toad bass, in weird places.
Toggle signature
Skiffer
Reactions: fishgrappler, Depresfish, Omarkayak and 30 others
Upvote 1

Heck of a day! Surprised you are up!!
Reactions: repo805
Upvote 0
P

I am very impressed with your stamina. I am getting tired just thinking about all your activities.
Reactions: Danthefishman and jeffkaiser
Upvote 0

Long day. You should try to sneak a rod in and try to hook one of those nuclear turd rollers.
Reactions: mrkrabs
Upvote 0

Wow. Great report and pics. Some Cuda and Phat Co's at Nados, and big Sandie at Sea World.
That's a full day indeed. Get some rest!

Yeah, impressive. I would have been on my couch with a Mai Tai taking a nap after the island deal. But, you ended strong. Getting mocked by sandbass is a good way to end the day.

My son asked where you sis was

Stud level achieved, I would have faked an injury
Toggle signature
Lurkmeister
Upvote 0

Hustler said:
My son asked where you sis was Toggle signature
Disclaimer: The opinions expressed are mostly Bullshit, should be taken with a gain of salt and most likely contain spelling and grammatical errors. Any issues regarding this comment should be directed to the WGARA Department. Thank you.
Reactions: mhanson59hb
Upvote 0

the SLIDER said:
Relax Belk. Your sister isn't that hot.

that was a herculean effort on your part. Well done

Heck, I was plumb tuckered out just reading that!

What a fun day!
Toggle signature
Go ahead, make my day...

Wow, whirlwind day! Can't imagine how you managed, but you sure did! That comic con barge reminded me of a song the easy listening station used to play in an office I once worked in. I'm not totally convinced I have the lyric correct but it was something like, "Precious and few are the moments we toucans share..." That easy listening station pushed me toward tendencies. Terrific report! Good fishin'!
Toggle signature
Sometimes you feel like you are absolutely fucked. But then you look at the situation again and it turns out you are only like 40% fucked. --Mingma Gbyabu Sherpa