so, i'm flying down to PV with a short layover at LAX. we board the plane and who do i see but none other than the world famous wahoodad, david choate! he will be on the constitution with jeff shapiro, francisco del mundo and david gee! 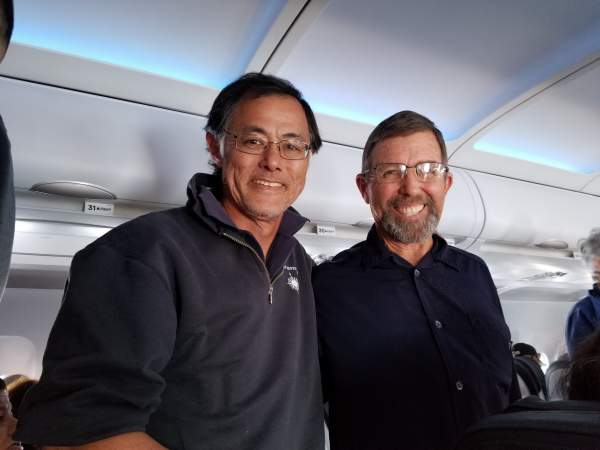 i will be joining marlas sportfishing on the el pescador. running the boat will be danny osuna, roberto osuna, first mate zanate and chef fernando macedo! 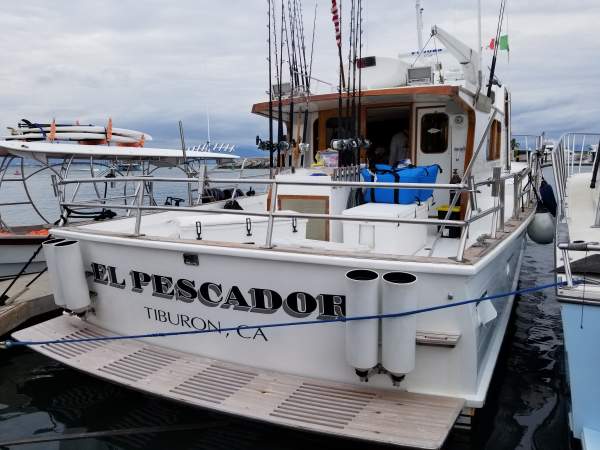 we arrive in puerto vallarta and pick up bohemias at the oxxo and wait. a marlas sportfishing employee picks us up at the airport and drives us to the dock, with a short detour for tequila at the local mega supermarket. after stowing our gear on the boat, we have dinner at oso, the restaurant at the top of the dock. with me are jonny nguyen, ed hayden, rich kubota, paul rowles and doc paul dennis. 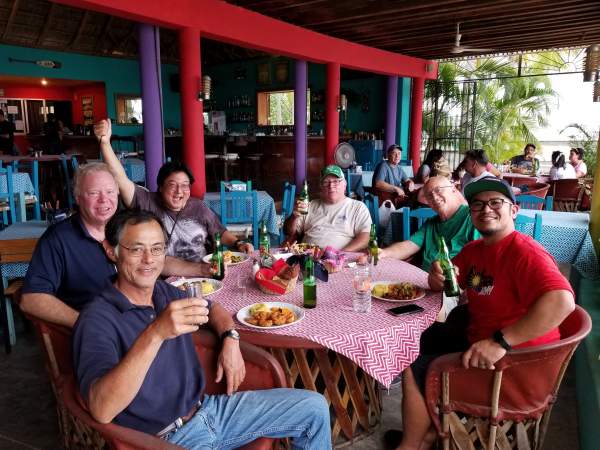 at 5pm, we are underway! 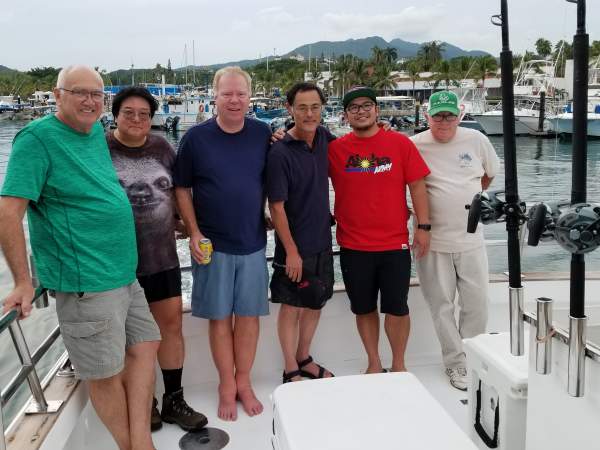 danny osuna knows me pretty well. for any fishing trip, it's nice to get a few fish in the box as soon as possible. we arrived at the islands at 5am and he has jig rods for us. there were big pargo everywhere. i had half a dozen vicious bites, but nothing stuck to the jig. of course, it was then that danny suggested that i take the covers off the hooks...... 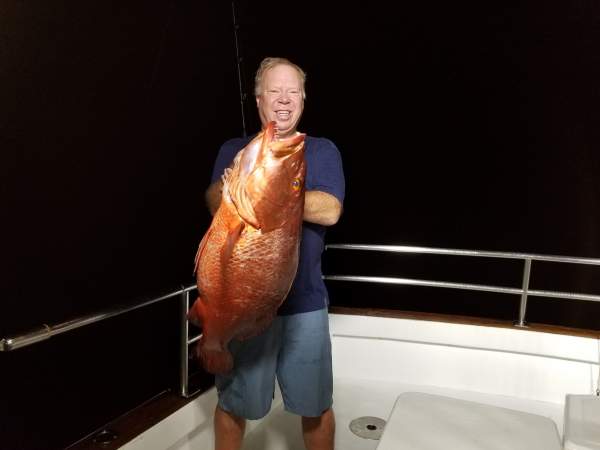 we settled back into yellowfin mode and saw fish busting everywhere. big ones. but no takers. lunch was pretty much the only thing we scored until late. 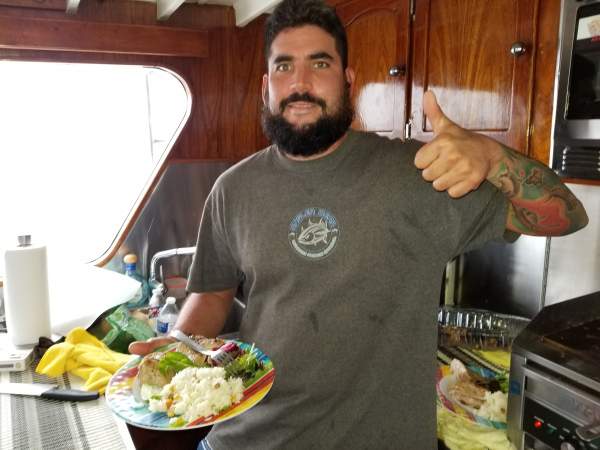 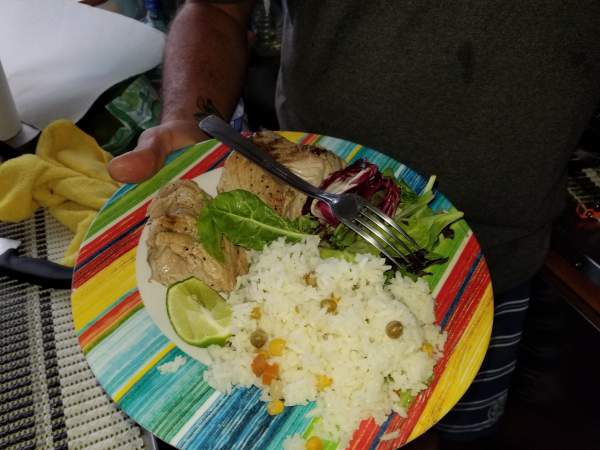 it was not until late that we actually hooked up. the first hit was jonny bravo! here's the first half of the fight.


he was doing well but the fish was starting to wear him down. towards the end, jon got really tired. this fish taped out at 180 pounds.


by the time rich hooked up, it was pouring. i couldn't risk video in the rain, so we just have a few photos. for the last 15 years, rich has been trying to catch a cow. on the first day of our trip, he got it. rich, congratulations! 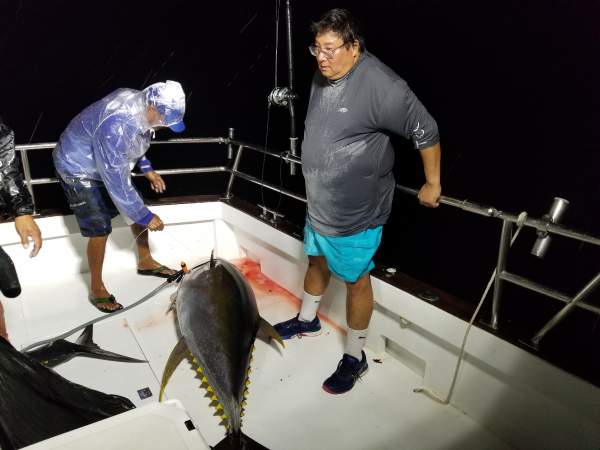 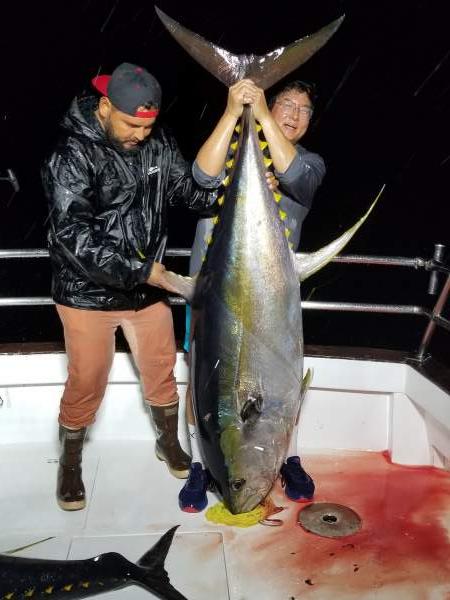 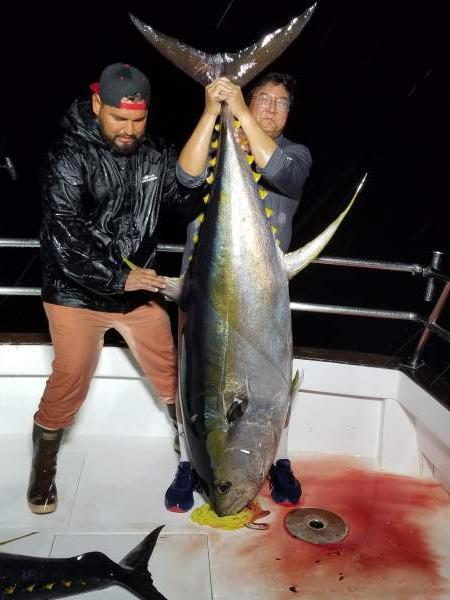 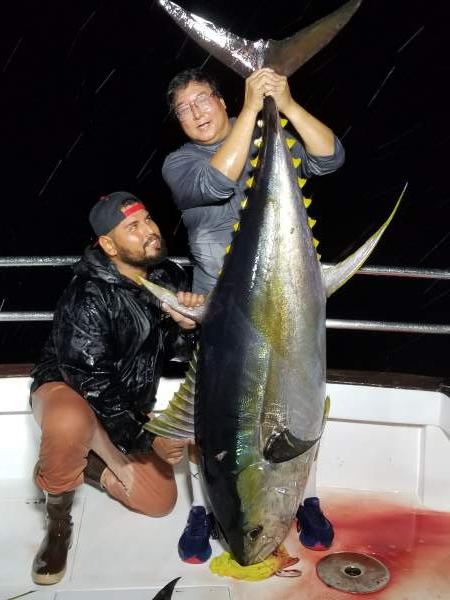 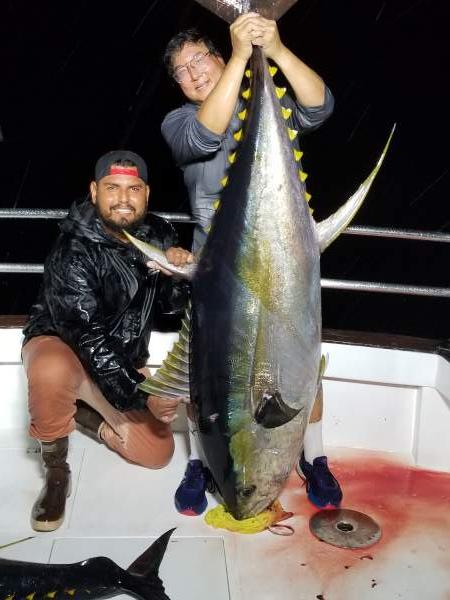 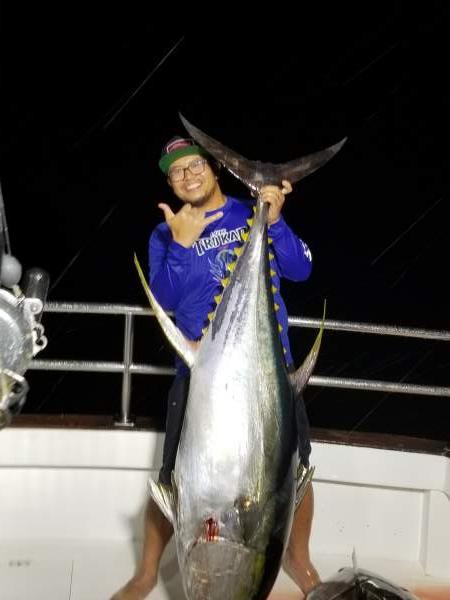 for all of the morning and most of the afternoon, it was fish busting out everywhere, but no biters. i'm tellin' you, this guy is great! 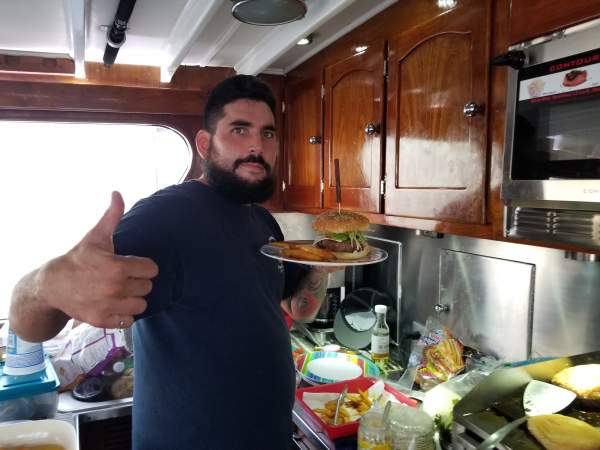 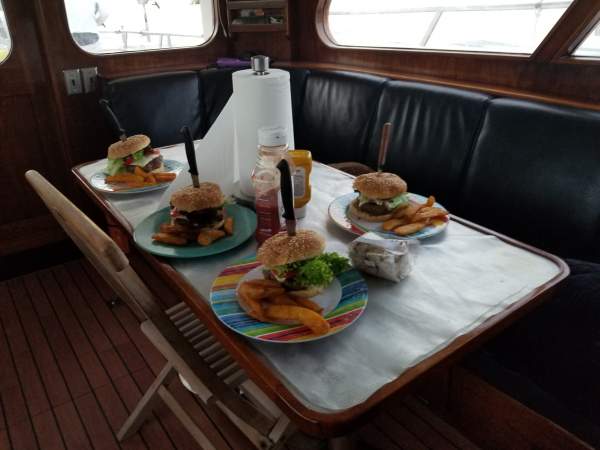 ed finally got an 80 pounder that stuck! 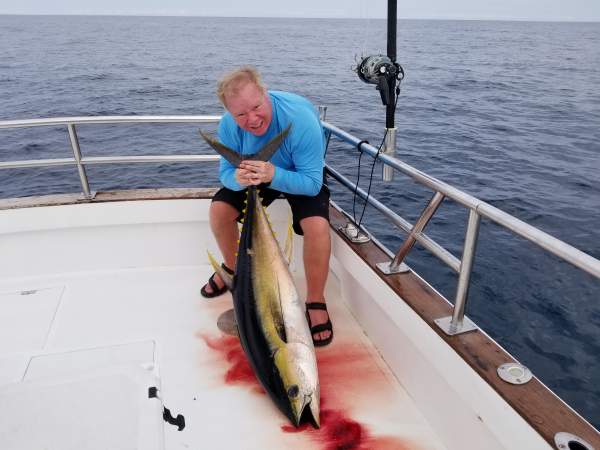 this evening was far different from the storms of the previous night! 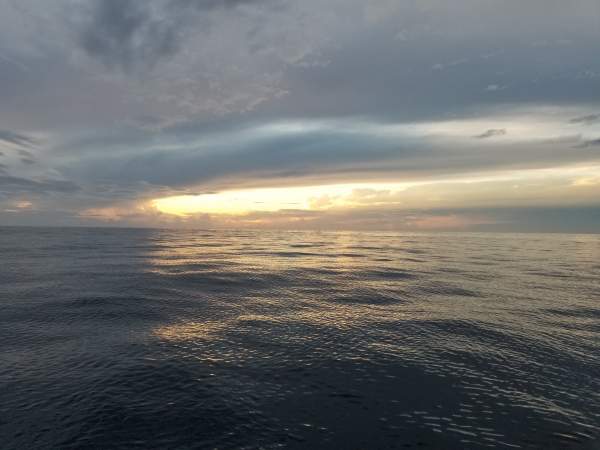 right at dusk, our chef hooked up on a 130 pound bait rod and handed it off to doc. then he grabbed the closest rod to him, which just happened to be one of those jig sticks. it was an high speed okuma tessoro 12S and an okuma pch 7.5 foot jig stick rated 12-25. and 60 seconds later, he hooked up again....... 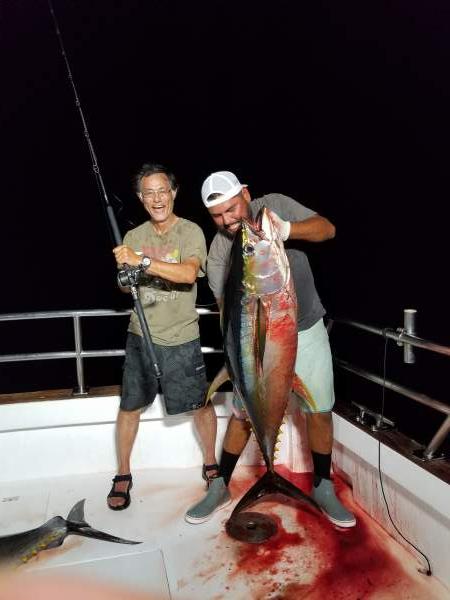 happy birthday to my brother, ed tani, and to my other brother, danny osuna!!!!! 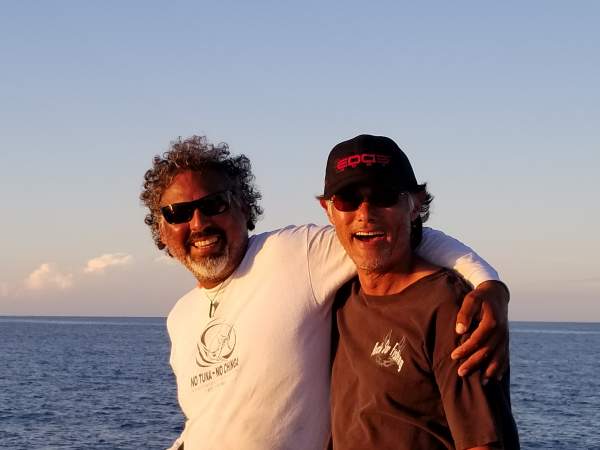 all day, fish jumping everywhere and no biters!

we get a double, late afternoon. both fish are fought!


both fish are gaffed!

finally up! it tapes out at 230 pounds. it felt like 330 pounds because it was dead and was getting dragged up sideways. one hook of the "double trouble" rig was in his mouth and the other hook was in his tail. 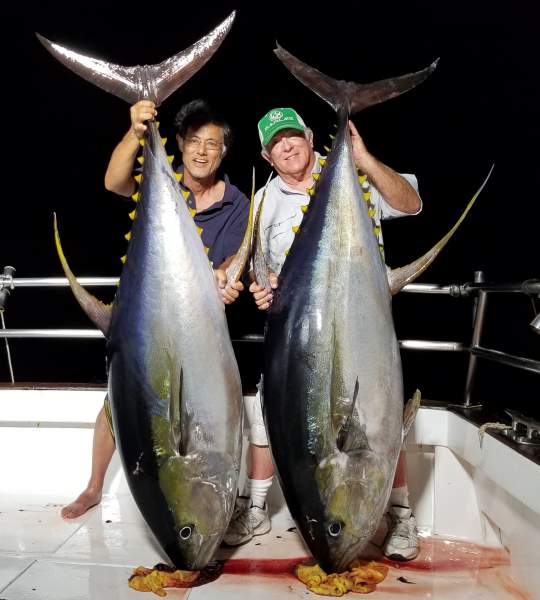 exhausted, we cleaned up, had dinner, and all collectively passed out around 9pm. while we were doing this, the crew was cutting up, vacuuming packing and freezing our fish until probably midnight. so, yes, these guys ARE probably the hardest working guys ever.

with the late bite, we got back to the harbor way later than usual, close to 8am. while the crew cleaned up the boat and packed our fish, we headed out to breakfast. the crew works so hard. we all tipped them extra! 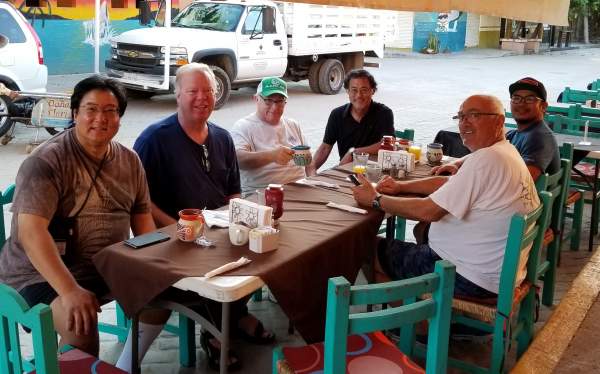 you've really gotta see that the osuna's run an incredible operation. danny and roberto had a plan. they stuck to it and it worked. zanate is always there to help. and even with a bad cold, fernando was always working. this was probably one of the most difficult trips for the crew that i have ever been on. catching fish late in the evening like this meant that the crew stayed up even later to process our fish. it literally doubled their workload.

as far as the actual boats go, the 55 foot delta that the osuna family is working on is still not ready, but it's getting close. until then, they are fortunate to have access to the 50 footer. larry lionetti's el pescador is an impressive platform to fish from. she's a 50 foot delta with a forward v-berth that sleeps 4 and a port cabin that sleeps 2. the lower bunks in the forward cabin are a little cramped, so the skinny guys have to sleep there, but it's not a problem. she is starting to show here age, but this vessel is obviously well cared for. there is plenty of fresh water, the hot water is hot, the air conditioning is cold, the drains all work, the heads work, the ventilation is good, the cushions are thick, and there is plenty of room to move around. everything on this boat is well maintained, and everything works. i know it may not sound like much, but these are things that you will definitely miss in boats that are not as well cared for!

these are still small boats, but it's amazing what you can do from this kind of platform with the right people at the helm. so that is trip number one down, three more trips - december, january and march - to go! stay tuned!
Expand signature
eddie's brother, grady white 258

great write up Alan!
such an awesome outfit...I can't wait to fish with those guys one day...
Expand signature
you can't trip a tripper

Awesome trip. Thanks for sharing

Great write-up Alan. I’ll be fishing with the Osunas in a couple of weeks. They do, in fact, run an excellent operation.

looks like a super fun trip. I'm heading home Tuesday and am looking forward to getting out there. Nice to hear lots of breaking fish as I will be spearing. Were they mostly in the area shown? anything on the other side/between 2nd and 3rd island? thnx for the report
Expand signature
La Cruz Huanacaxtle
K

Looks like a fantastic time and that was a terrific report!

In the first video where Johnny Bravo gets that 180 lb fish, the video shows him pulling the rod out of a rod holder and working around 3 other rods in rod holders. What were you guys fishing? Chunk bait? Is that one way of doing it? Just set out the chunk at a specific depth and stick the rod in a holder and wait till the clicker goes off?

We were fishing with caballitos north of the islands, either on the flyline or the balloon. We were always an the north side.
Expand signature
eddie's brother, grady white 258

Well done sir. Thanks for a great report.

Alan thanks for another outstanding report! Working in the rain and late harvests certainly can test the crew!

I am in PV now and will be posting up on Thursday about our Dorado/Sail/Marlin slayathon. This is my daughters first time here so lotsa babysitting!
Reactions: karlk1125