Fished an overnight on the PQ left at 8pm on Thursday, and we started fishing at about 1 am Friday didn't stop until after 4pm. All in all it was a fun trip. No big fish , they ranged from about 20 to maybe a stand out 75. We fished a hard long day, several different spots of fish with a couple that bit pretty good.
I started off the morning cranking a 250g FF on a triton 50w , non stop from 1 am until the sun came up, captain was calling out depths, I personally had marked my spectra every 50' so I knew pretty accurately what zone my jig was in, but to the captains amazement, and despite alot of effort on everyone's part nobody got bit in the dark. I spent the rest on the day fishing a fathom 15xnld with 30lb fluoro, mostly flylining, but a bit of sinker rigging. Hooked a small fish on a flylined bait pretty early on maybe 20lbs, a bit later I hooked a second fish on flyline, this was a much better fish. I put quite a bit of heat on it and after a couple minutes I pulled the hook. That kind of stopped my success for quite a while, I started getting a bit worried that somehow I wasn't going to get my second fish in the bag. Somewhere around 330 or so
(I didn't check the time at all through out the day) I hook another fish on a sinker rig ,this time feeling like it was getting late, and being a bit of a bitch, and really wanting my second fish in the bag , I backed off my drag a bit and this aunery little fucker took my ass around the boat a couple times, one time swimming on the surface about 30-40 feet from the boat all of the way from the Starboard stern to the bow, but at the end it was gaffed. Very shortly after that I hooked another fish on the sinker rig, knowing that I had my limit ,and wanting redemption from my embarrassment of basically getting my ass kicked by a high 40s fish. I absolutely put the wood to this fish, I told my buddy you wanna see how to kill fish on 30lb, cranked up the drag and beat the hell out this fish , less than 10 minutes and it was bleeding on the deck. Shortly after that it was time to head back. Good times with a bunch of cool people, I was with a group of I think 14 friends of friends. Food was good , and the deck hands worked there tired asses off. 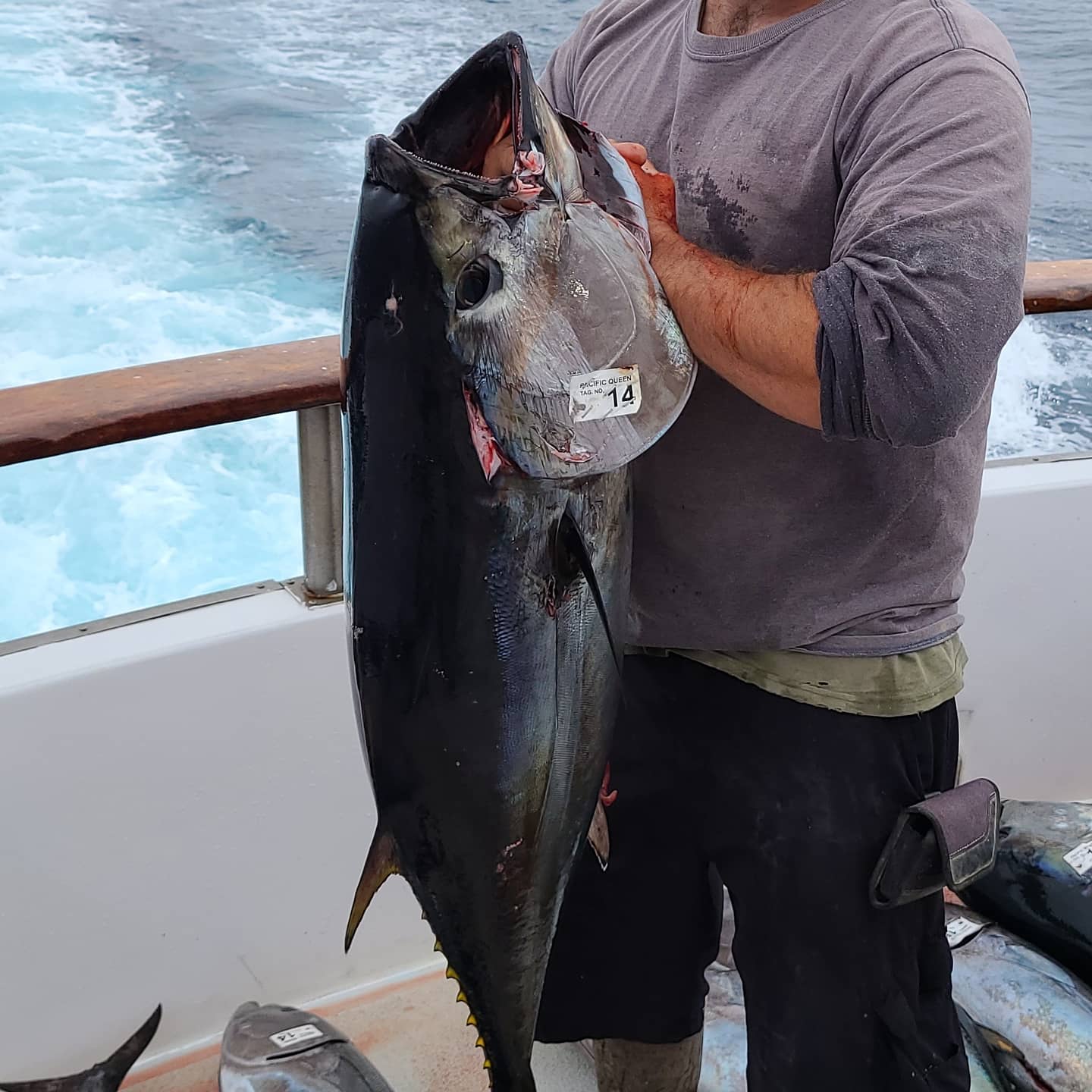 50#. good job. We were next to you about 1/4 mile. just you me and 3 other sporties, then it got crowded. The PQ is a kickass rig.
Reactions: Tuna Dreamer, Willdoggy and fly liner
Upvote 0

Those are some nice fish.
Overnighter. How cool.
Reactions: Tuna Dreamer and fly liner
Upvote 0

Sorry Josh, you look a bit like Opie from Sons of Anarchy.

I would say solid 50lbers nice fish ! Thanks for the report!
Toggle signature
Work to live and Live to fish!