Went out rock fishing with a group of friends/co-workers yesterday near Point Sal.


We had two really good drifts on the edge of a ridge in about 60-70ft of water.

One of our guys didn't quite have his sea legs all day. Did a fine job of chumming up the water and sleeping!

LIMTS OF JUMBO REDS AND x2 +10lb Lings.
All of which were hooked on a 5inch YELLLOW & ORANGE swim baits.
The fish were loaded with what looked like Mini Dungeness Crabs.

ALL DAY ONE CAST ONE FISH!


The Quality was not something I was used to! Every single fish that came over the side was +5 lbs.
Our rookie fisherman/co-worker landed a 14lb Ling on an Orange 9inch Swimbait an 5oz Lead Head.
I caught a 10lb 4oz Blue Ling on a 160gm Chart/Glow Flat Fall...

I cant remember the last time I had that much fun fishing Rock Fish!
Pics to come tonight when I'm off of work.

Conditions were amazing! A little windy with small swells in the morning. Laid down completely by the
time the boat was back on the trailer at 2PM.

& FOR YOU SALMON GUYS. VERY FEW IF ANY WERE CAUGHT.

DFW was out and about inspecting catch.

Mentioned maybe one or two caught all day. 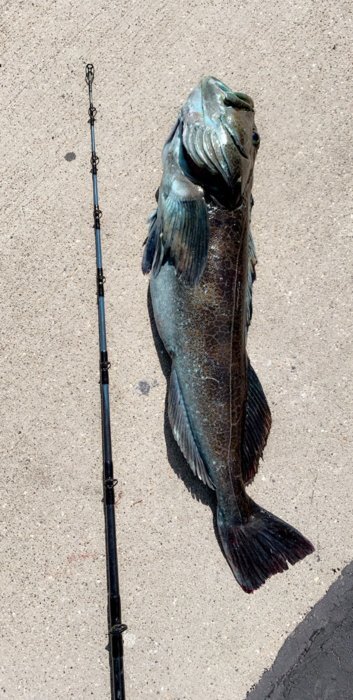 I think the fish wanted to die yesterday. We launched at leffingwell at 6 00 and we were back on the beach by 9 00 with the same quality. My dad was on the endeavour and fished near Cape San Martin for the same.
Nice report
Reactions: Mk6_Robbie
E

Nice, You out of morro bay somone there should be thinking Albacore, water is perfect right now
Reactions: justin perkins and Nathan Ley

Wow thanks for the report love fishing that spot we usually drift over the boiler that place produces fish for sure. Watch the wind one time it got us. Half hr from Port San Luis to get there and 3 and half hrs to get back.... Not fun

Expand signature
Fish Tacos for me...