My buddy grew a variety of hot peppers and brought a jar of PJ in to work for me. I made the mistake of sharing it with the crew. 20 mins later it was gone and we were asking how to get more.

I pulled some strings and for a sixer of Rebel Rouser it was game on. He brought over two grocery sacks full of that homegrown goodness and I contributed about a pound each of jalepenos and serranos. I also bought 2 cases of pint jars and two cases of 4oz jars. He brought one case of pint jars as well.

This is what we had 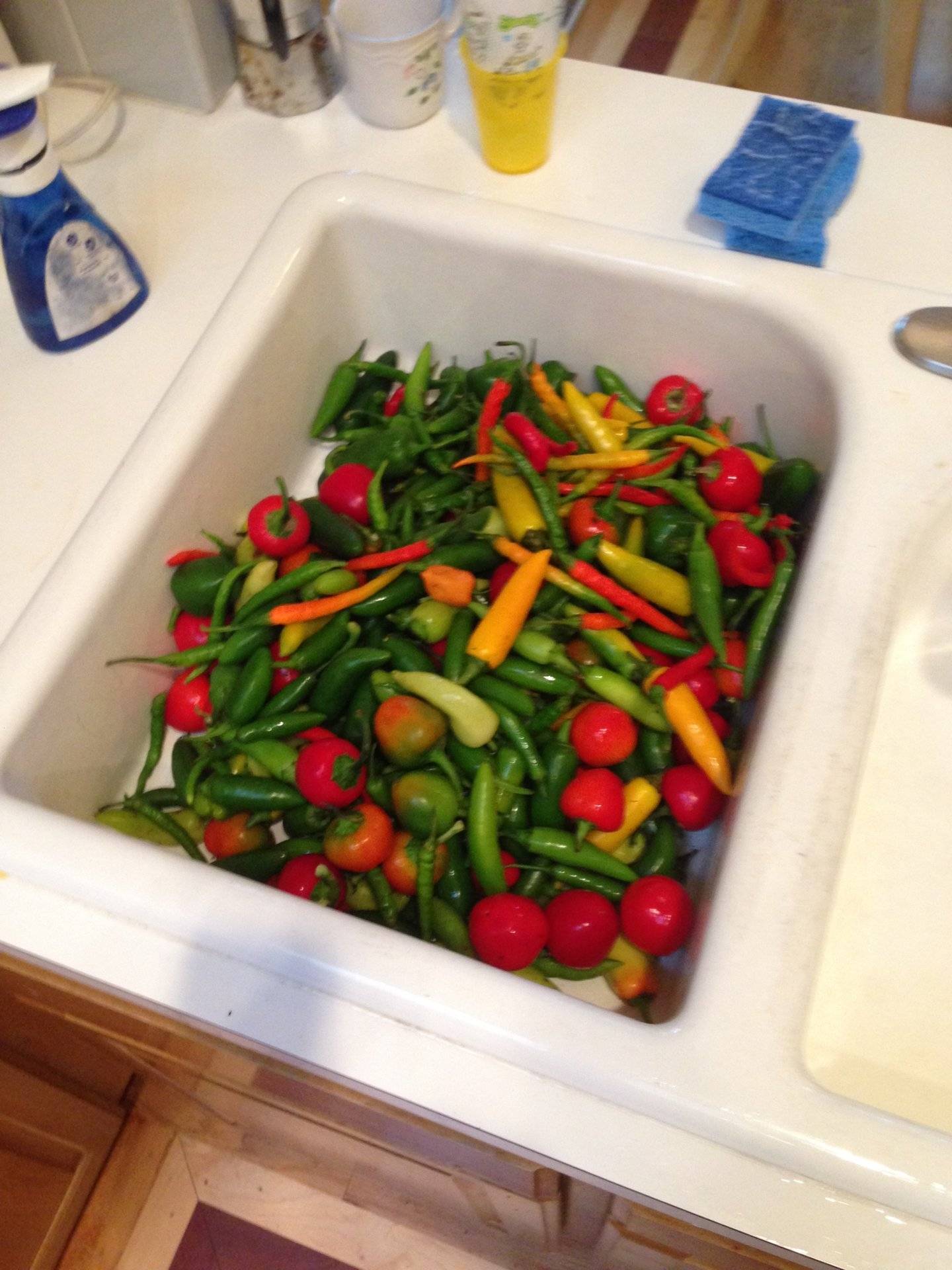 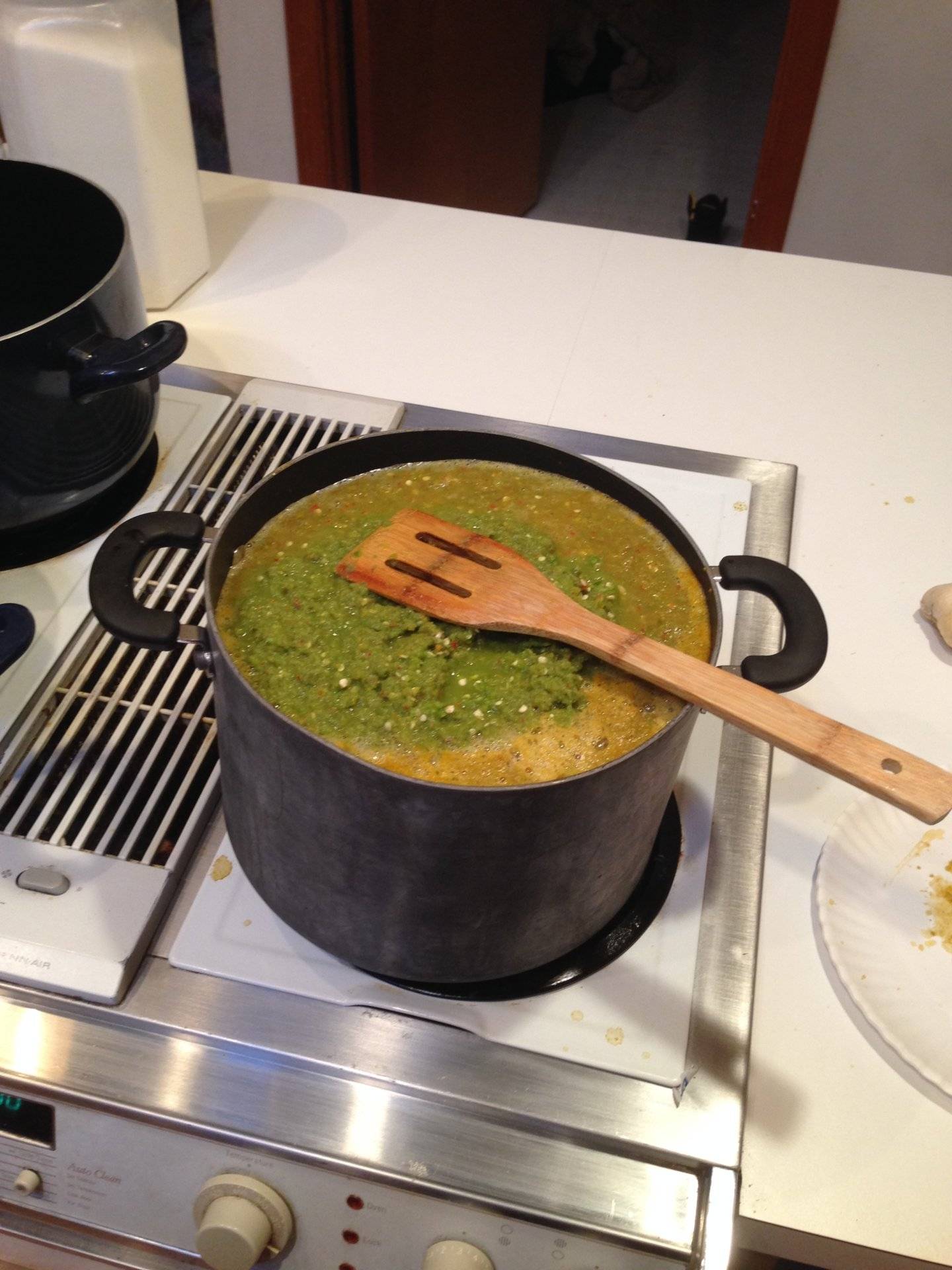 Boil it down before adding pectin and sugar. Fill the jars and quickly can. We ran them with lids on venting to atmosphere (no rattler) for 10mins. This is a little over 1/2 the bounty. 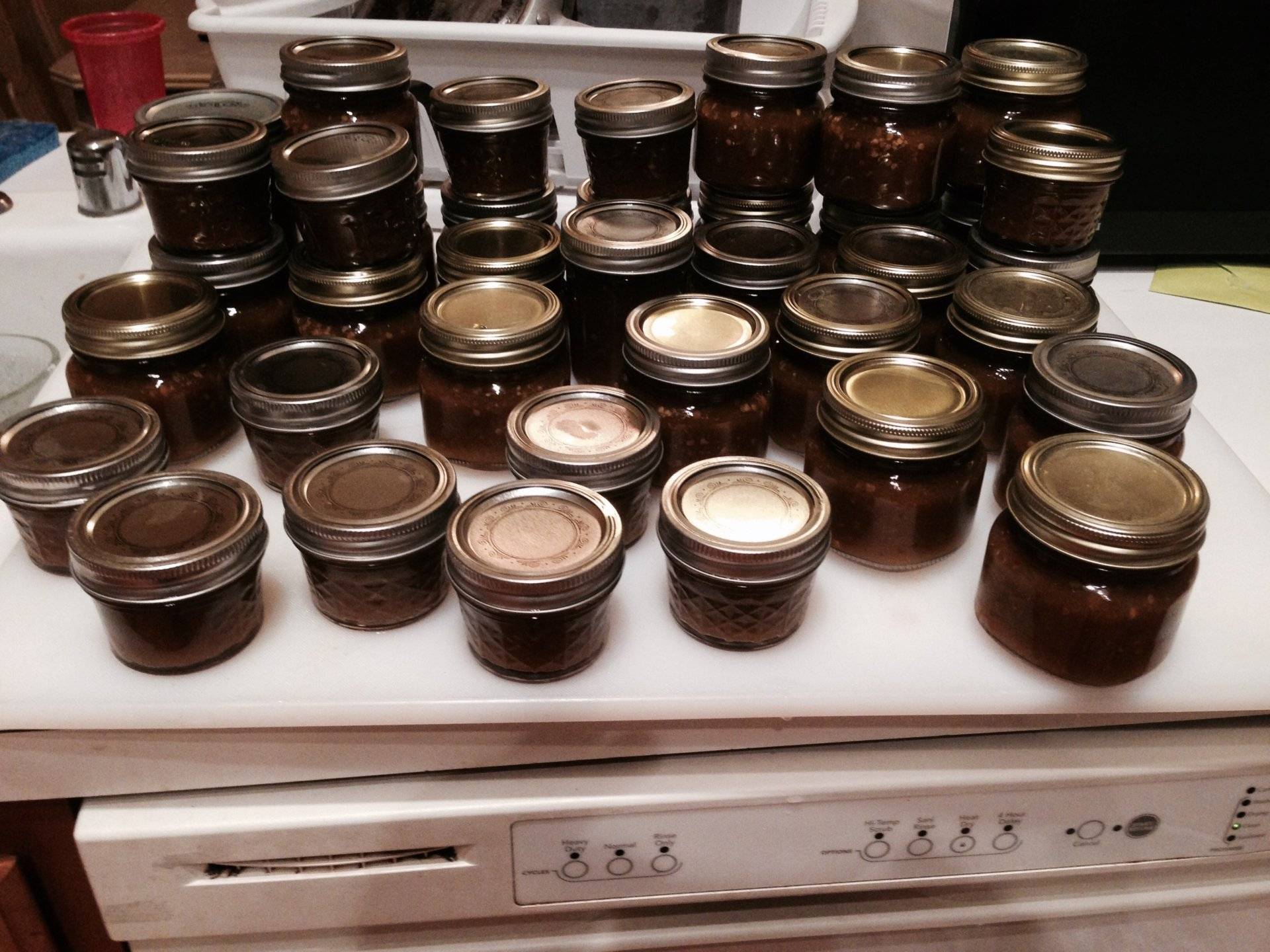 I can think of other uses besides with cream cheese and crackers like: generously spooned over seared TUNA, adding to BBQ sauce, etc. Chef Patrick could have a ball with this stuff!!!

Since he shared the recipe I will too. I'm sure there are others doing this but it's well worth the time. Obviously we exceeded the amounts shown below...

makes about 16 half pints


Puree peppers, garlic, and 1⁄2 to 1 cup of vinegar in a blender (in batches if necessary, depending on blender capacity). The goal here is to add enough vinegar to create a pourable puree. Bring puree and remaining vinegar to a simmer in a large soup pot. Simmer for 30- 40 minutes, stirring occasionally. Meanwhile, in a dry bowl, mix pectin with 1 cup sugar. After puree has simmered for 30-40 minutes and reduced slightly, add pectin/sugar mixture from bowl and thoroughly stir to dissolve. Increase heat and bring to a rapid boil that can’t be stirred down. Add remaining sugar to jelly mixture and return to a rapid boil for 1 minute, stirring constantly. Remove jelly from heat and skim off any foam (if desired). Stir food coloring into jelly if desired.

Quickly pour jelly into sterilized jars, leaving 1⁄4” of head space. Wipe the rim of the jars with a clean paper towel moistened with vinegar. Place lids onto jars and finger tighten bands to seal. Place jars in canner ensuring that
the lids are completely covered with water. Bring canner to a boil and process jars for 10 minutes. Turn off heat and allow canner cool for 15-20 minutes before removing jars from water. Allow jars to completely cool on a towel covered countertop (or at least until the lids seal).
Reactions: Odin7, bullshooter, WaveDancer and 1 other person

My wife is from Maryland and her family has a very similar recipe. I love this stuff! it has a multitude of uses. Thanks for sharing

Nineball said:
Chef Patrick could have a ball with this stuff!!!
Click to expand...

YES! Yes he could.
That looks great! Thanks for the recipe.

Did you wear a respirator for the boiling phase?
Reactions: bajabills

Make sure you wash your hands very well with diesel fuel or turpentine before fiddlin with the Mrs. I assure you this is not a mistake I ever want to repeat !!

robodad said:
Make sure you wash your hands very well with diesel fuel or turpentine before fiddlin with the Mrs. I assure you this is not a mistake I ever want to repeat !!

You and I must know a common person or I know someone else that happened to.... I heard about that on a fishing trip.

Downdraft took care of most of it

I made some hot pepper brine for some pickled green beans last summer and that shit was like tear gas. I ended up finishing the cooking process on the deck. Even the dog was crying.


Mpizzle said:
Did you wear a respirator for the boiling phase?
Click to expand...

Love that stuff.
Of course it's great on crackers with cream cheese but try smoking that cream cheese first... Fucking amazing.
Expand signature
If I had a dollar for every girl that found me unattractive, they would eventually find me attractive.

Elkfins said:
Love that stuff.
Of course it's great on crackers with cream cheese but try smoking that cream cheese first... Fucking amazing.
Click to expand...

Well sh&t, now I gotta makeshift a cold box off of the treager to accomplish that one!!!!!
JB had a thread on it. More to come.

Tonight is the girlfriend's birthday. Made her a dinner of Steak w/ Seared Scallops that are sitting in a pool of cream sauce made with @Nineball 's Pepper Jelly.
Fucking fantastic! Apparently winter has arrived up there.....
Expand signature
"What is the MLPA anyway? They are the meanest people ever!"

I'm going to rub some of that pepper jelly under the skin of my thanksgiving turkey.