First off I want to say that I am in no way affiliated with the resort or any of the brands I mention in this report, and am far from an expert on this type of fishing. I just wanted to post this in case others were on the fence on whether to give Panafishing a try during this unstable time.

I was originally booked to fish with Pierre in Pedasi on May 2020, but a total blockade on immigration to Panama during that time caused a reschedule to February 2021. Took my Covid test at Walgrens for free and headed out on 2/14 just ahead of the huge winter storm in Texas. Arrival at Tocumen after a short layover in Houston was no problem as they checked the test result paperwork in an organized fashion. We stayed at the Santa Maria Hotel (Marriot property) near the airport which I recommend. Carlos the Panafishing driver picked us up along with a father and son from Pennsylvania which were great lodgemates. It would only be the 4 of us since the other guests from Europe had canceled due to travel restrictions.

The lodge is well appointed with air conditioned rooms, WiFi, and pool along with a common outdoor area for dining and tackle prep. Pierre has by far the best selection of rental tackle and tackle for purchase I have ever seen at a fishing resort (including Stella’s and Blackhole Rods). You could easily travel with nothing and not miss a beat. Point of note about the fishing program; cooler fillers need not apply. This is a CATCH and RELEASE fishery with a focus on topwater. NO BAIT, NO TROLLING. Be prepared physically and mentally to earn every fish you catch.

The fishing was slow by Pierre’s standards but I managed two nice roosters on a popper and stickbait (190-150 mm), along with a few jack crevalle. We got into a great topwater frenzy the second day for the biggest Sierra Mackerel I have ever seen. The exotic list got checked with an African Pompano. The slow pitch Jigging was very slow for me only yielding a few small amberjack.

On the way home, we tested at the Tocumen airport ($50.00 each) and had no issues with customs or immigration. I did remove the spools from my reels and put them in checked luggage (reels themselves were carried on). Pierre along with being a great fisherman is a great host solving any issue that comes up. The rest of the crew was great too (Freddy and Melissa cooking + Kieren and Pedras on transport). The food was world class and the drink selection was outstanding.

We’ll be back next year to give it another go with better fishing conditions hopefully. If you can get away and don’t mind dealing with a bit of testing, contact Pierre as this is arguably the best season which is typically booked solid until May. Due to cancelations from Europe, he is unusually available for short notice bookings. 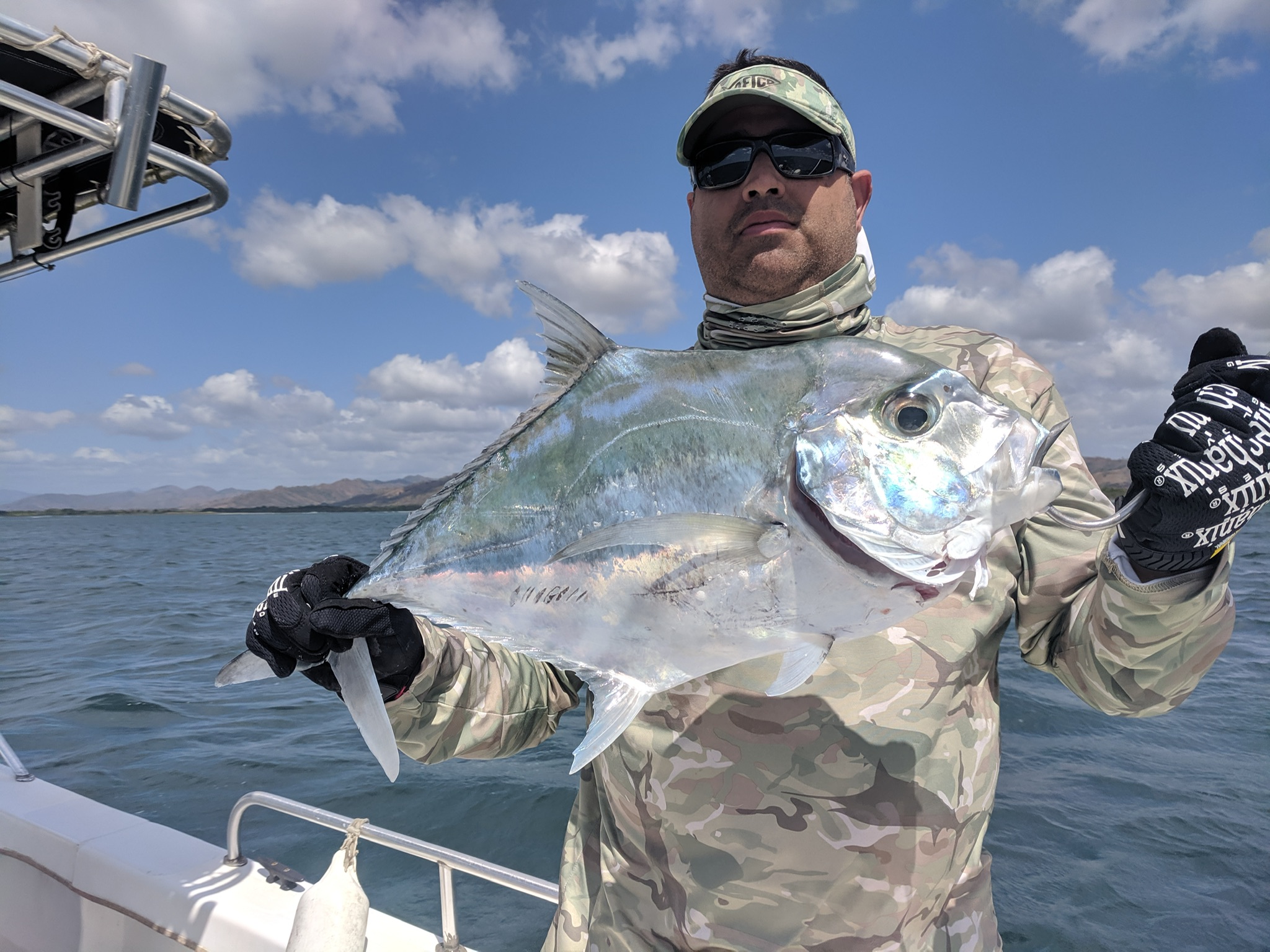 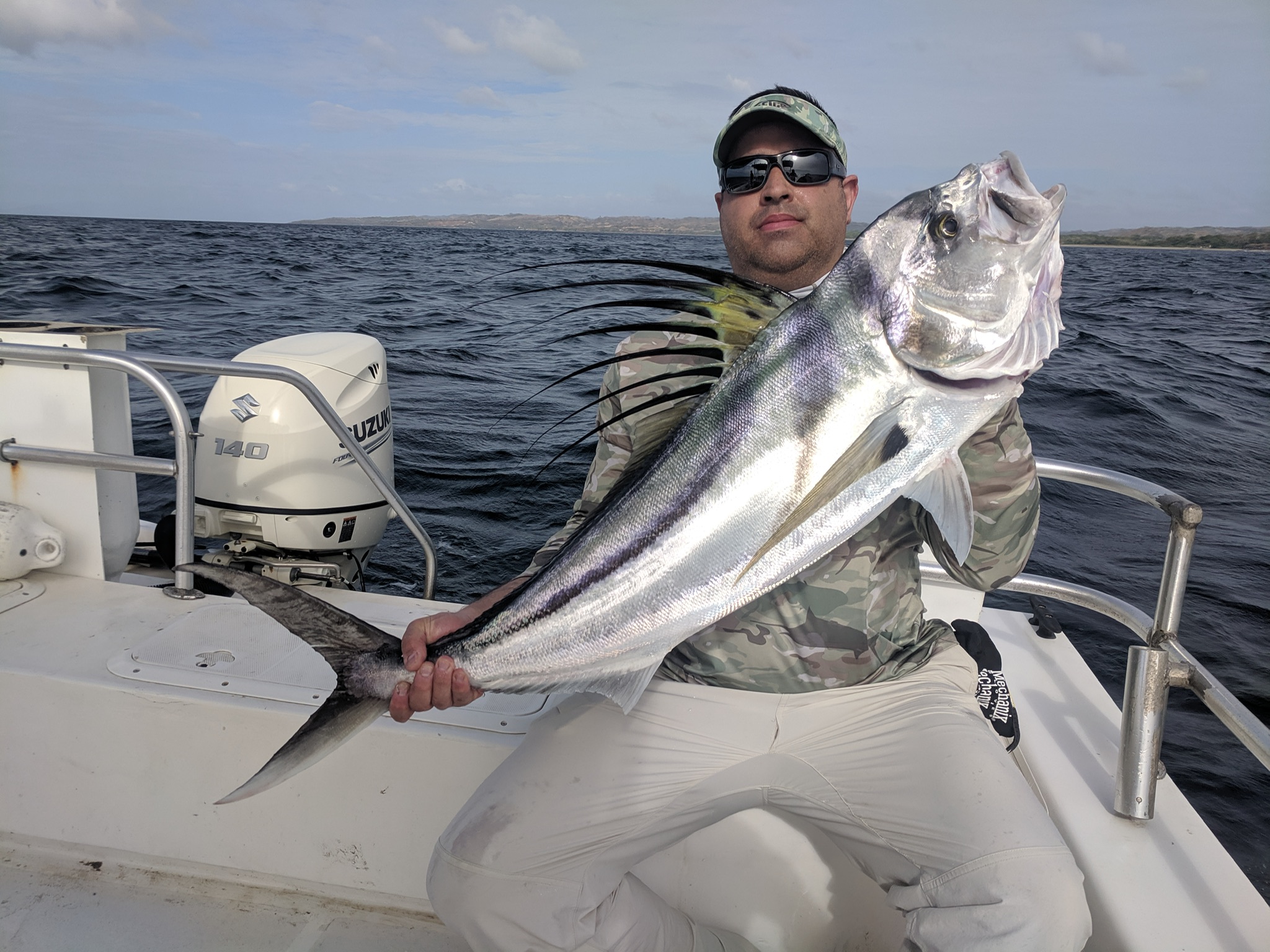 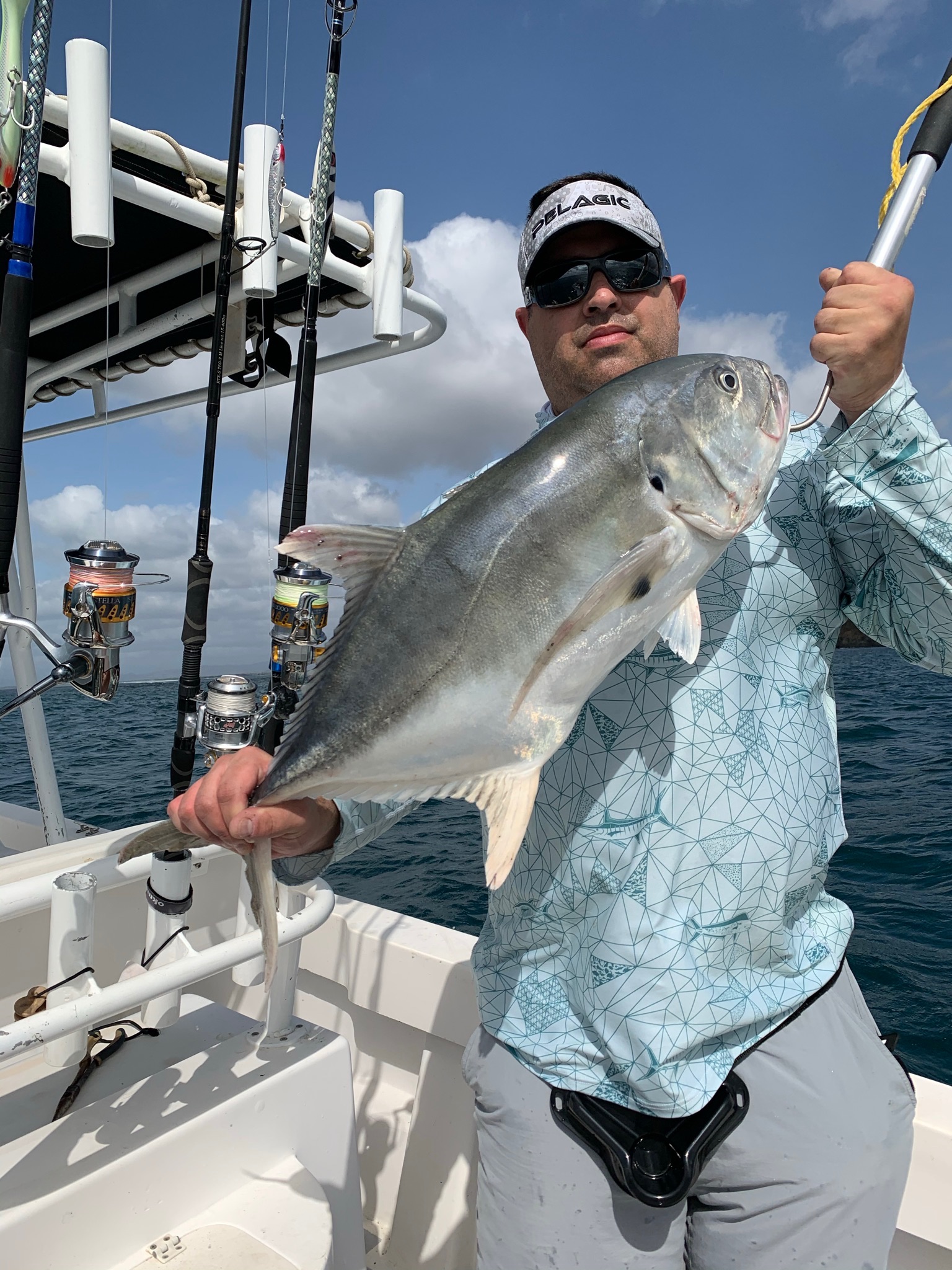 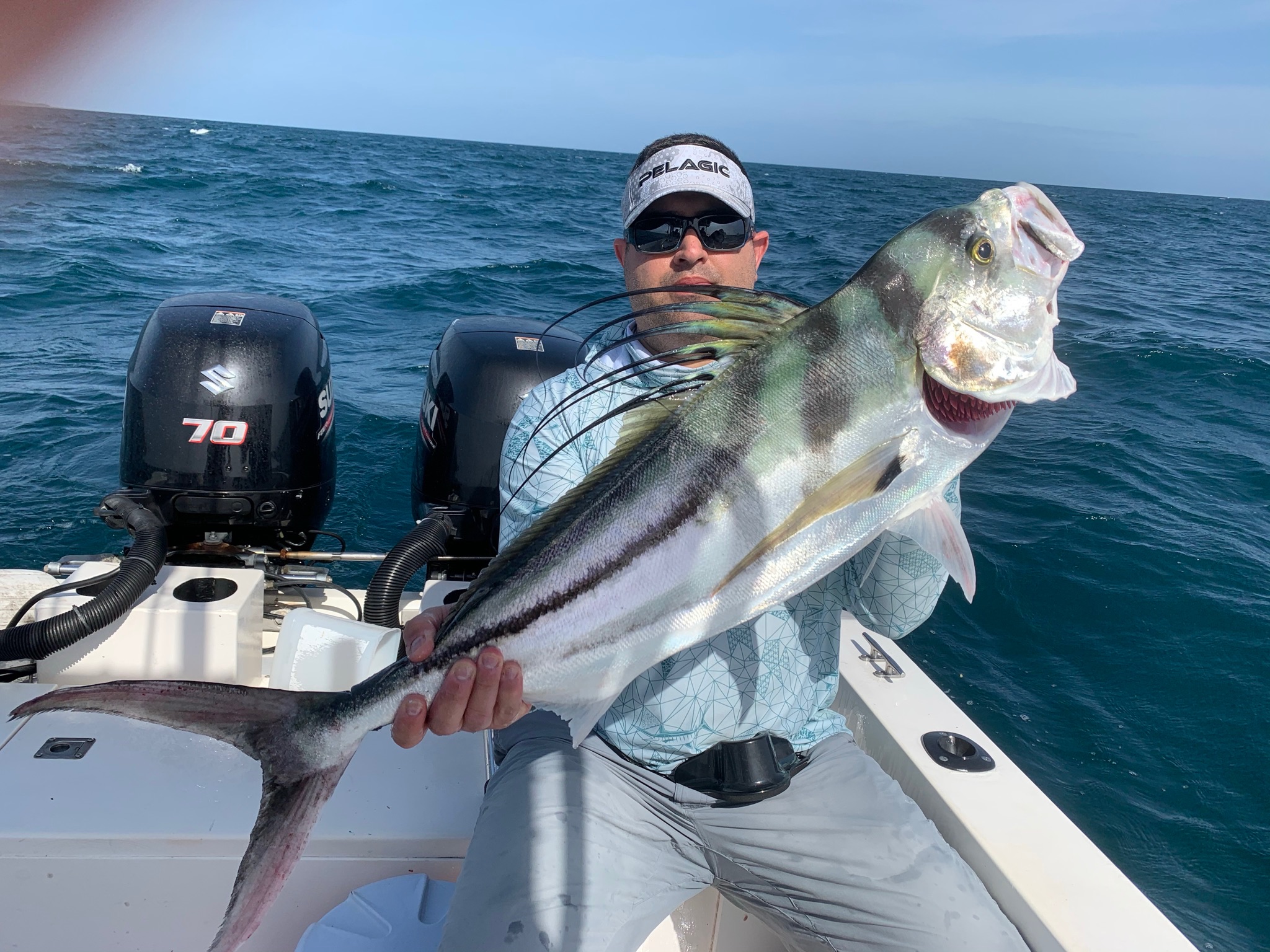 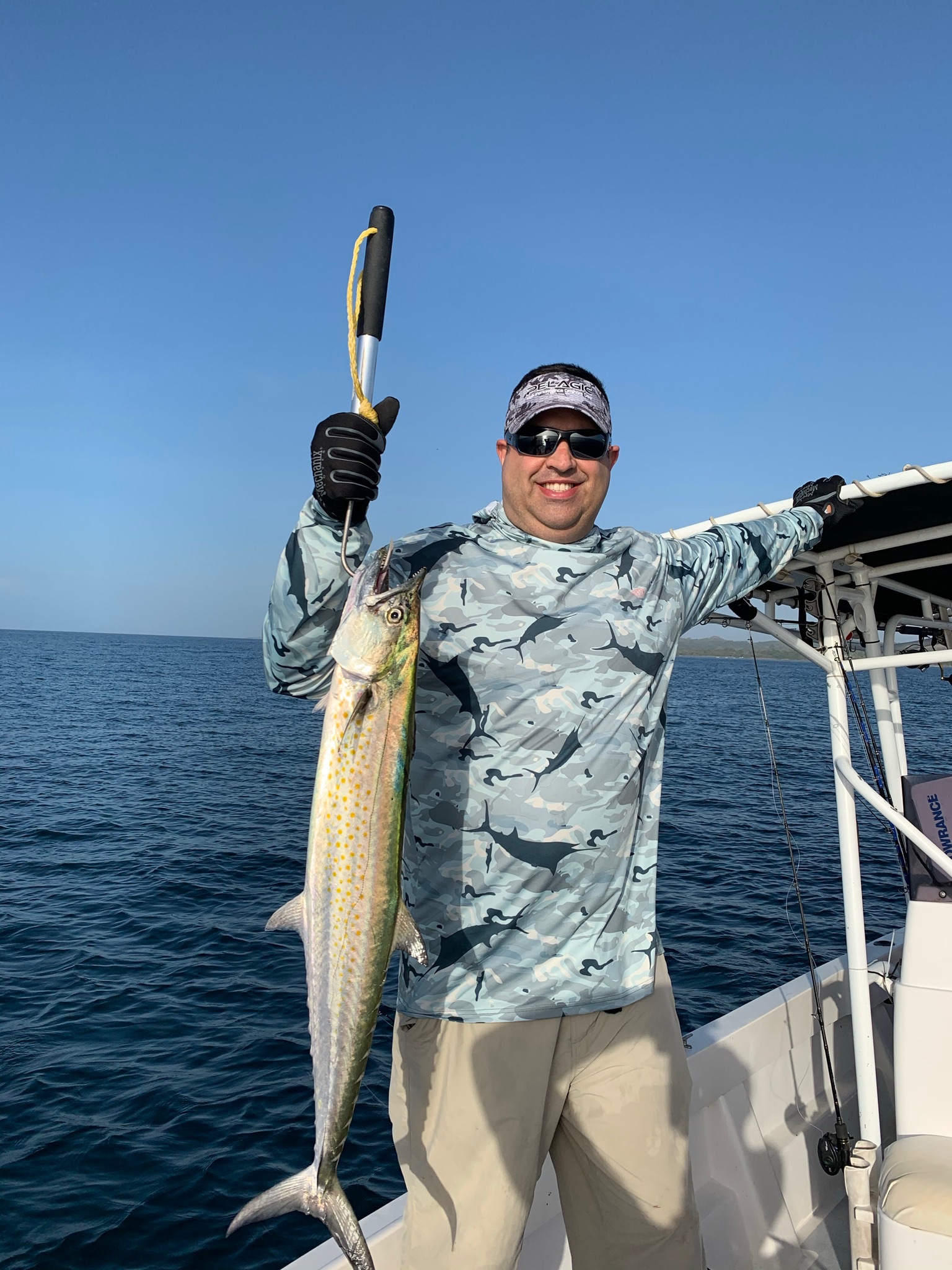 Great report. Big fan of the minimal (no rod tube) mode when traveling to Latin America, abroad.
You have your travel kit really sorted. Would like to see your packing solutions.
Also, how long was the drive from the airport to the lodge?
Thanks in advance.
Toggle signature
"It's not fish ye're buyin', it's men's lives."
—Sir Walter Scott
Upvote 0 Downvote

Thanks for the kind words. I use the Pelican im3100 storm case and did not incur any oversize luggage fees. Honestly I recommend only bringing reels and renting rods from Pierre if you don’t already have good travel rods.

Everything else went into a Patgonia 100L rolling duffel. Also no overage fees.

The trip to and from Panama City was between 4 and 5 hours along good roads. Going through Panama City on the way home was closer to 5 due to getting stuck in afternoon traffic. Included in the roadtrip were great views of the Panama Canal and a stop for lunch at a good restaurant called Xoko. We also stopped for restroom breaks and shopping at roadside stands (e.g. Fresh Fruits, Cold Coconut Water, etc.). I preferred it to the additional flight from Panama City to David most other lodges require.
Reactions: twotrack
Upvote 0 Downvote

Here is a link to the Fisherman rods in case anyone is having trouble finding them.

Thanks for the report. I miss fishing there. Pierre is very knowledgeable fisherman as well as great person.
Upvote 0 Downvote

Agreed Kil. A true gentleman and very accommodating. If you can get him on the boat with you, it is a real treat to see a master in action. I learned a lot about slow pitch Jigging in his area just by watching what he was doing. Hopefully next time I’ll be better prepared to make the most of that technique.
Upvote 0 Downvote
K

We met school of small rooster and caught and released about 20 -30 roosters one day.
Good grouper fishing on jigs with slow pitch jigging rods. Pierre joined our boat a couple of times.

Great report. What was the deal with testing upon return to the US? You mentioned that you tested at Tocumen. Where in the airport and how long before your flight did you get there to test? Thanks!
Upvote 0 Downvote

Boat
Wish I Had One

pascuale said:
Great report. What was the deal with testing upon return to the US? You mentioned that you tested at Tocumen. Where in the airport and how long before your flight did you get there to test? Thanks!
Click to expand...

My understanding is that testing is located on ground floor by rental cars. Info is two weeks old so it may have moved.
Upvote 1 Downvote
Show hidden low quality content
You must log in or register to reply here.