Great report and congratulations on you PB!!! Fish of a lifetime for most!!
Upvote 0

Way to get a PB only to break it the same night. Hell of a post!
Upvote 0
S

Here's the finished product from Five Star Fish Processing. They are fantastic and the fish looks incredible. You can keep it with them in the freezer and take a bit at a time. I'll post some pics tomorrow, my neighbor is a chef and is making a huge spread for my neighbors!! My fishing buddy Gus is going to smoke the collars for me. 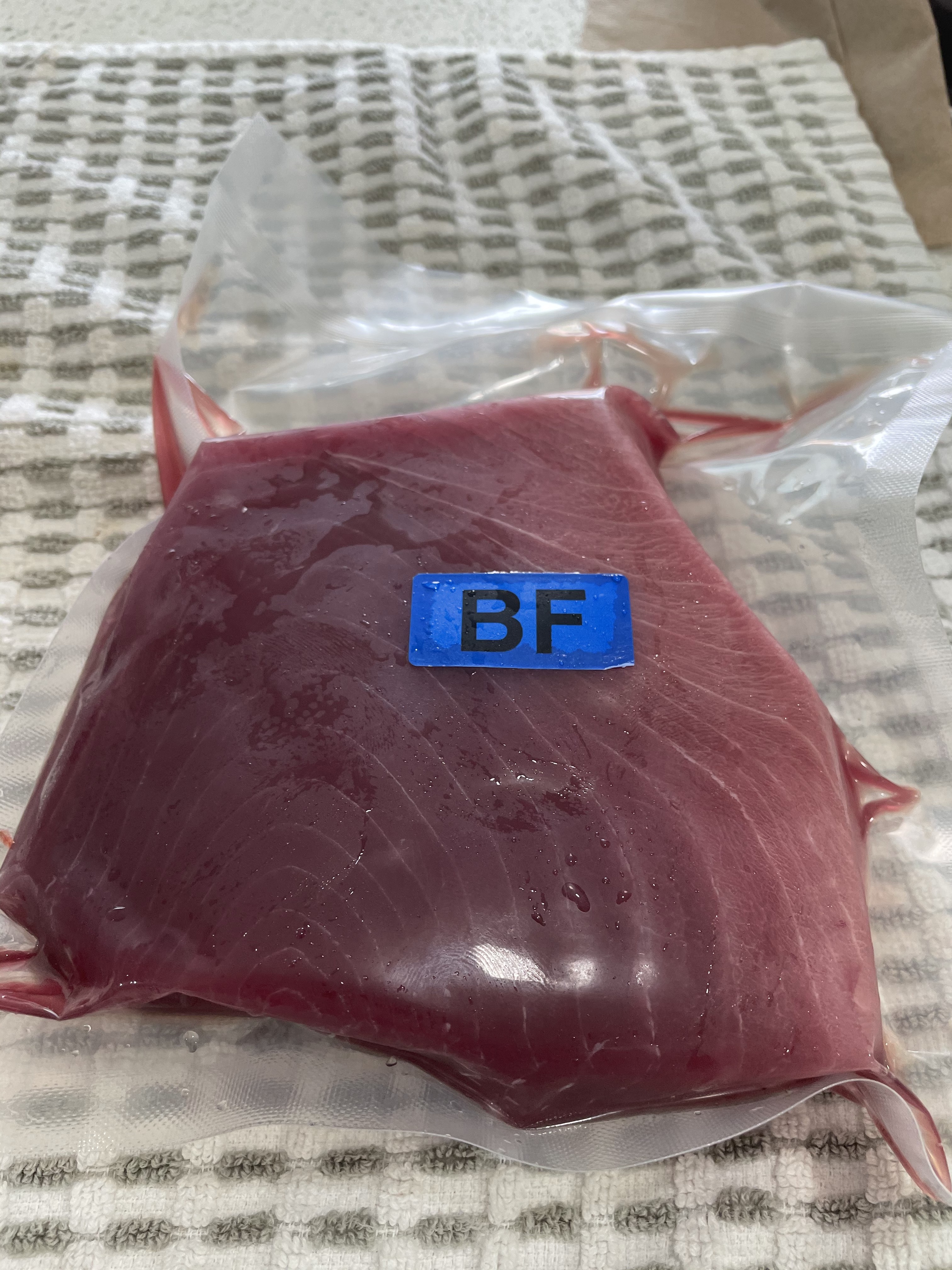 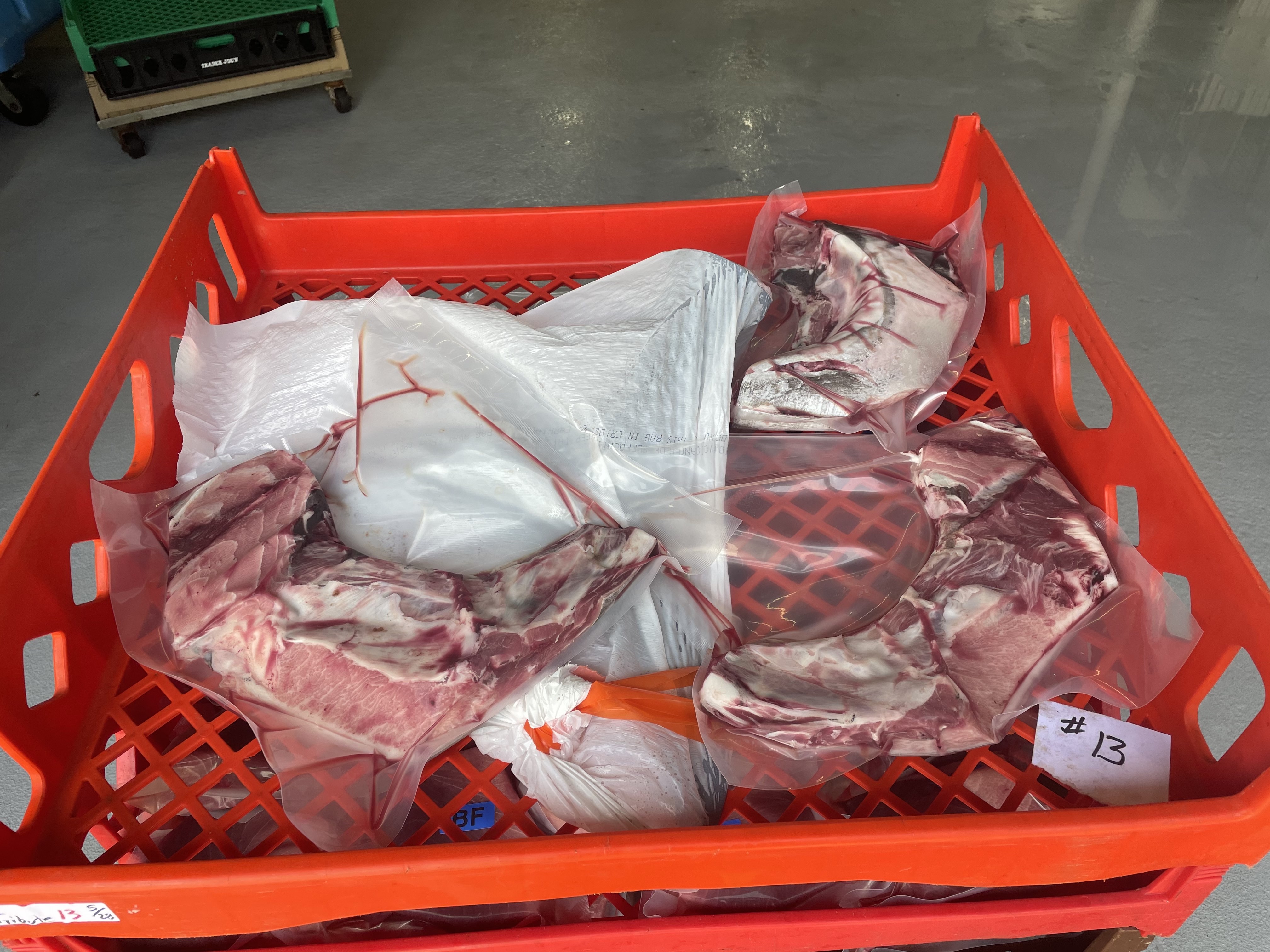 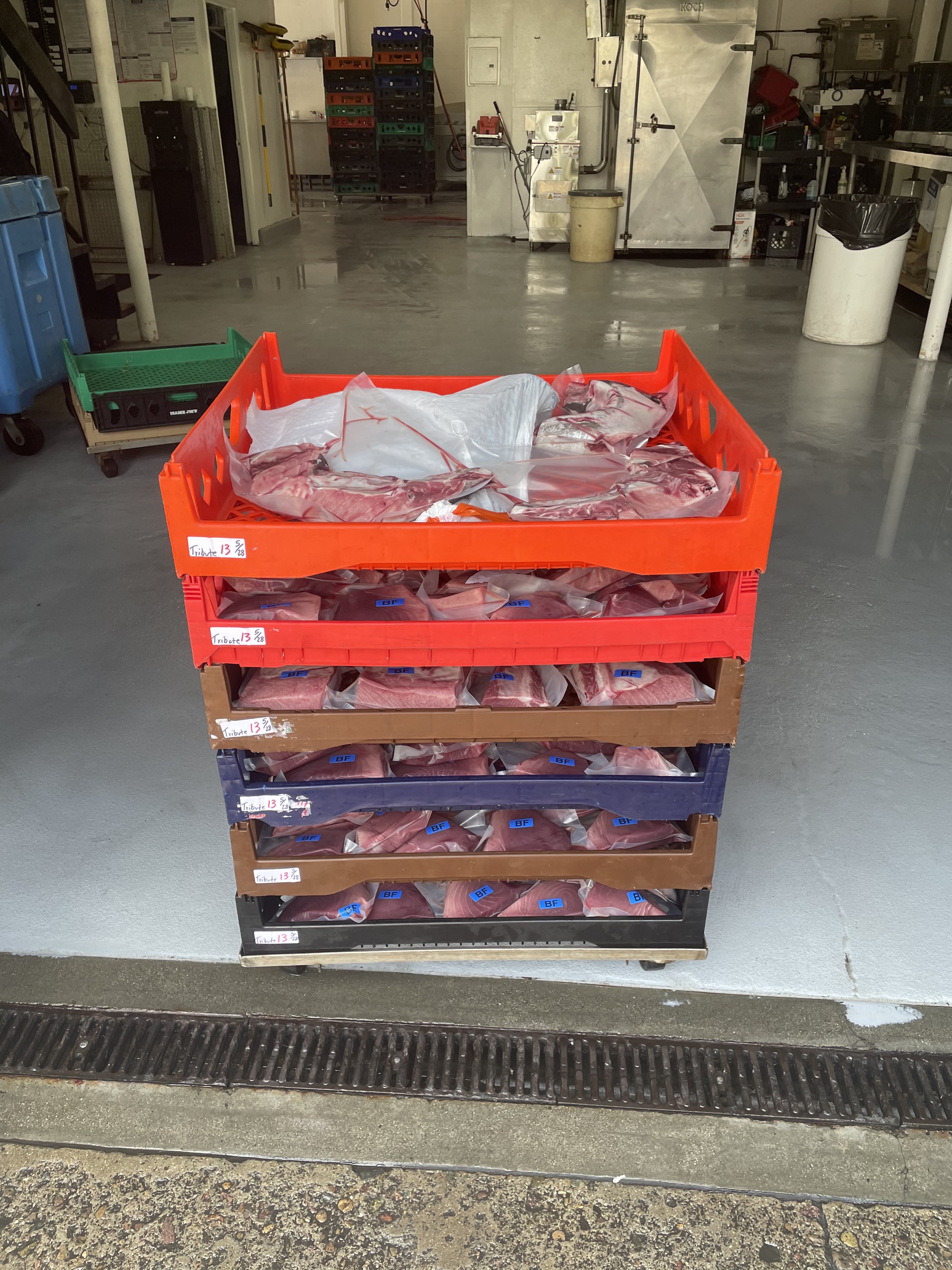 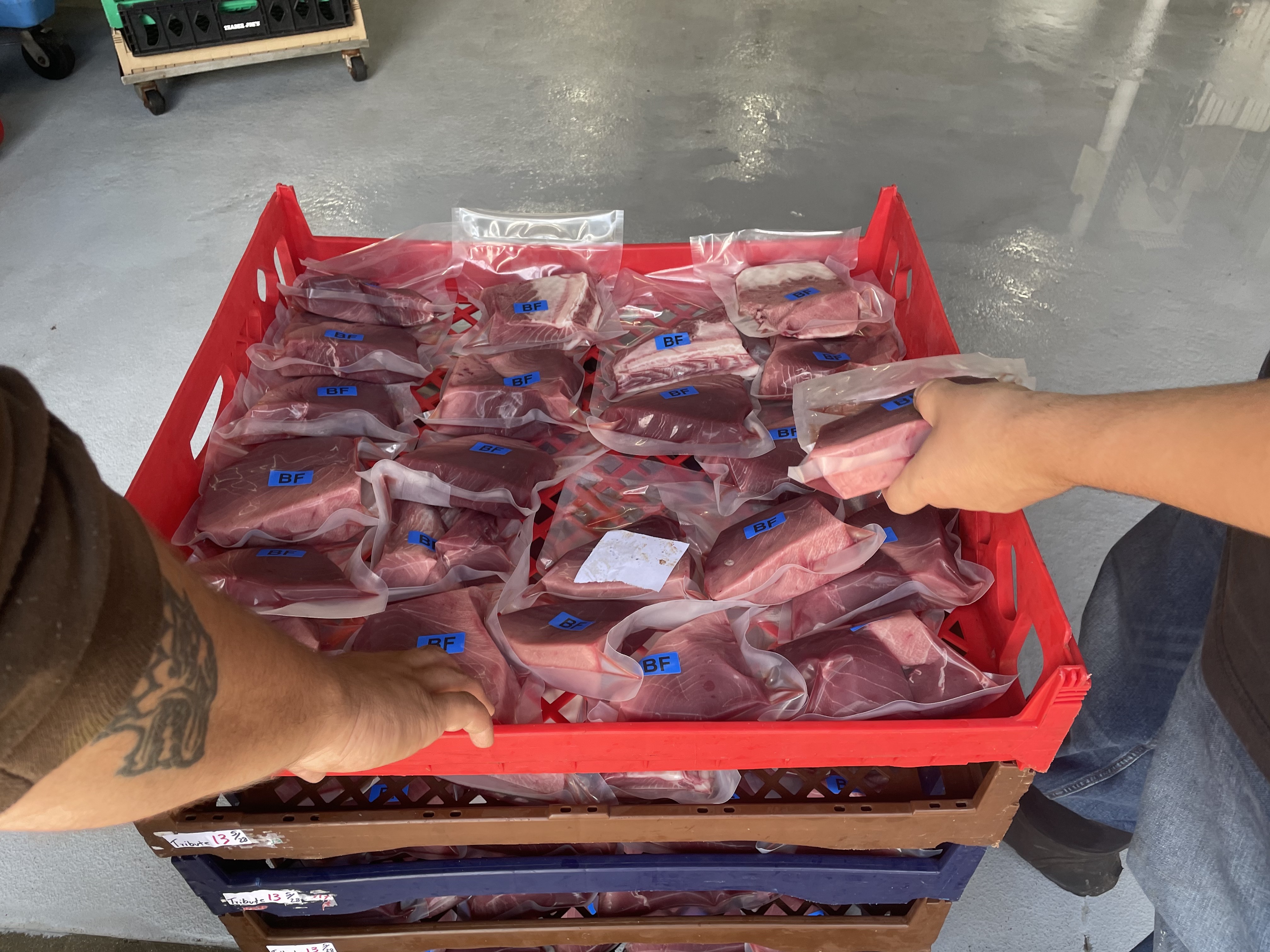 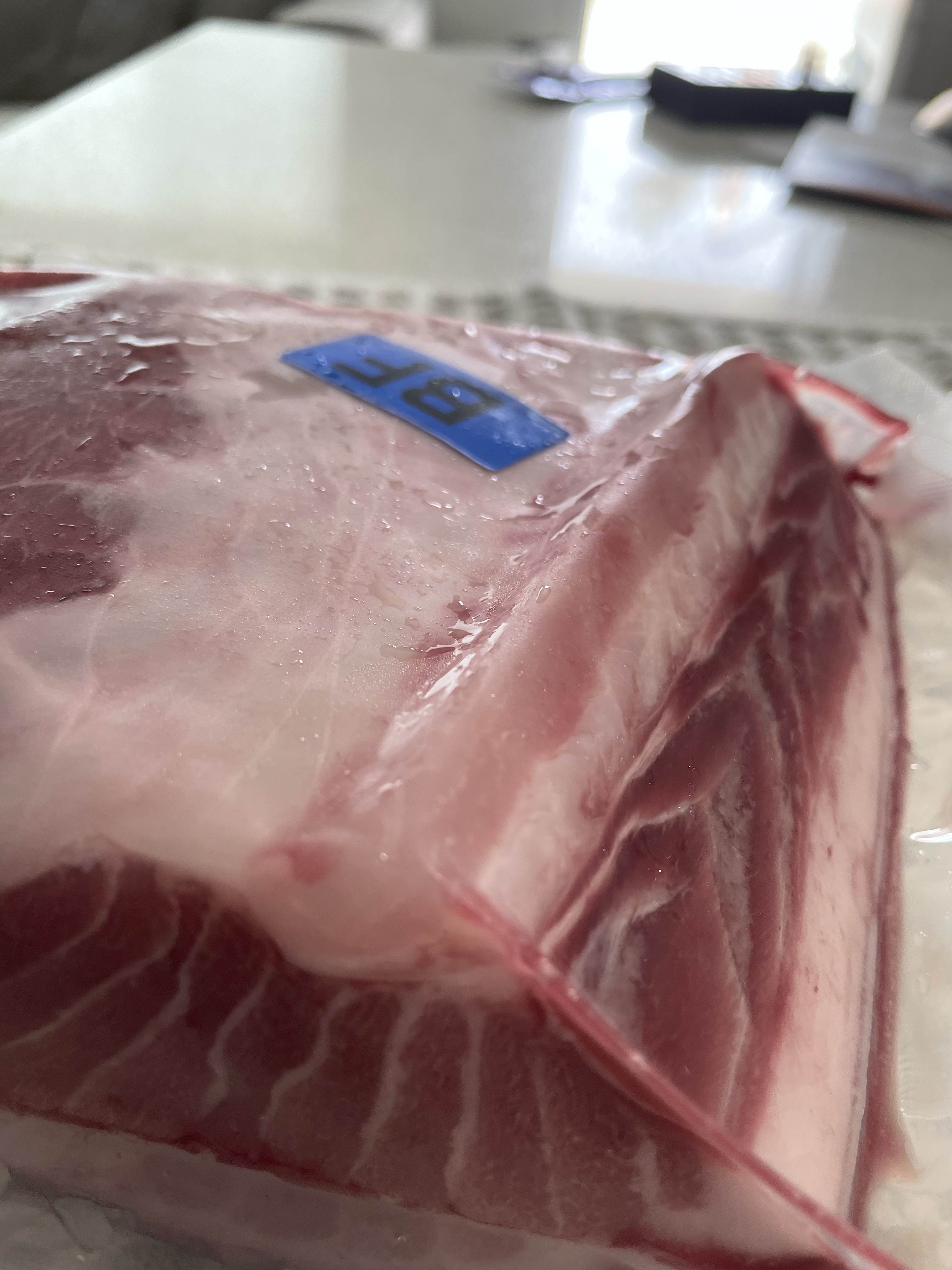 Hank, it's really cool that you show appreciation for all the people that help in your success....including the tackle shop folks, who are part of the "behind the scenes" folks. I would bet that you are a great guy to share the rail with. Thanks for the wonderful report, and congratulations!
Reactions: jiggermyster, dougbenc, mhanson59hb and 3 others
Upvote 0

Awesome write up! Thx for all the info on the how's and what time

. Really kicked up my stoke for my trip on the tribute this coming Sunday! I'll be sure to give a report once I'm at the dock. I'm tired of chasing these pesky fish on my own boat it's way tougher than I'd anticipated

SDSailandFish said:
Here's the finished product from Five Star Fish Processing. They are fantastic and the fish looks incredible. You can keep it with them in the freezer and take a bit at a time. I'll post some pics tomorrow, my neighbor is a chef and is making a huge spread for my neighbors!! My fishing buddy Gus is going to smoke the collars for me.

That's a good looking slab of chūtoro there.

(If you're thinking you might have more than you'll use, the guys and gals at your local FD like tuna too!)
Toggle signature
Clay,
dyholi!
Reactions: SDBAY
Upvote 0

Congratulations on the PB. That awesome
Toggle signature
It ain’t to godam bukooo
Upvote 0

SDSailandFish said:
What an amazing trip! First off, thank you so much to the captain and crew of the Tribute. What an incredibly well oiled machine. Also thank you to the Bloody Decks community. If it were not for reading all of the comments and posts I would have most likely not come home with these fish.
Booked the Tribute Pizza Port trip (overnight) about two weeks ago and saw the numbers on the fish counts and posts looking like lots of blue fin, started to get really excited until....reports dried up and the weather was not the best early week and wondering if it's going to be worth the $$ to chase the few blue fin being caught. Fortunately, the weather cleared and we got in line for the 8PM departure. The crew was very inviting and I made many new fishing buddies on the trip. I had a rental 60lb setup with a Shimano 250g flat fall that was rigged by the guys at Seaforth with some bad ass assist hooks and crimped 180lb leader. Thank you to the tackle shop at Seaforth they had great recommendations.
I had one slice of free pizza and one half price Pizza Port beer and hit the sack. Lots of folks up drinking and eating pizza when I woke up a few hours later ready to fish. On the ride out had two fantastic fishermen show me how to use the lever drag and two speed reel. Everyone was great and worked for the most part as a team.
I rigged all of my gear in the parking lot so I was ready around midnight to start dropping my flat fall. After reading many posts I decided on a plan of dropping the flat fall until daylight or until my arm fell off. There were only about 15 of us out around midnight and it seemed very slow for the first hour and a half. The captain hailed us to say there were fish down deep around 250' of water so those of us out were mostly dropping flat falls. My buddy Gus hooked the first fish around 1:30am and as we drifted and rotated down the rail I went around three times and Gus was still fighting his fish. Gaffs come out and BAM, it's a 130lb blue fin on the deck. I didn't even have time to say congrats or celebrate as I was focused on one thing.
Once again, I read a Bloody Deck report last week from someone saying they did not give up on the flat fall and had a bite at the last minute after jigging all night.
My first bite was at about 2:30am and it felt big. The deckhands raced over to check my drag and Tyler walked along side me and gave me directions as I worked my first blue fin to the boat in about 20 minutes. BAM, 120lb blue fin hits the deck!!! My PB before this was a 36lb Mako I caught on my sailboat on the troll. My arms are tired and I could not believe how tough it was to reel this thing in. Same thing, no celebration - right back on the rail.
It was about 4:30am and I was thinking about getting a coffee and taking a short break when a lot of the folks decided to go in for coffee. I looked at Gus and said "we've got to take advantage of the free rail space" and the two of us went to town on the flat falls. 10 minutes later on the drop I feel a very strong set and pull. This one is BIG, I'm on my rental rod and having a very difficult time stopping this fish and am making very little ground on it. This drift I was going down DEEP and had about 400' of line out when this thing took the Shimano flat fall. I fought the fish for about 15 minutes and realized I was not going to land it by myself. Tyler was right there and I asked for help as Tyler went to town on this beast. We traded off about four more times.
At one point, folks were on the bow as Tyler was fighting this beast and they kept on letting tons of line out were not reeling up or letting us by fighting this beast. After about an hour fight, we had a tangle on the bow and the line went under the F'n boat!! Fortunately, the fish was tired and somehow the deckhands were able to use a lead sinker to release it from whatever it was caught on and held the line by hand while they spliced it back on and continued fighting this thing.
Well over an hour and Tyler man handles this giant and the gaffs are stuck!!!!!!
From the boat measurements they estimated 185lbs. Bled/gutted was over 160.

Congradts again, great job and report! That one pic of the tuna from 5 star, is that bone on top? I do not understand!? Anyone comment on this?
Toggle signature
All bleeding stops eventually.
Reactions: jiggermyster
Upvote 0

tunakillerjoe1 said:
Congradts again, great job and report! That one pic of the tuna from 5 star, is that bone on top? I do not understand!? Anyone comment on this?
Click to expand...

Looks like the vacuum sealed edge of the bag.
Toggle signature
Clay,
dyholi!
Upvote 0
Show hidden low quality content
You must log in or register to reply here.