Left Tuesday morning September 10th aboard the PQ on a 3 day. Checked in, shot the shit, and loaded up about 10:15. Lots of tackle storage and a friendly bunch of people. Headed to the bait barge about 11am and started rigging gear.

Captain Gavin called us all to the bow during the bait load and after the safety talk got into rigging and the plan. 20-25lb floro and a size 2 or 4 hook belly hooked for yellowfin and 40-50lb with a #1 for Bluefin. Then heavy gear for Flatfalls. We continued rigging up, boat baited up, lunch was served, and I took a short nap as we continued towards the fishing grounds (diesel engines put me to sleep).

We started fishing just after 3pm and it was totally insane. Yellowfin were slamming every bait that hit the water in the aft starboard corner chum spot. I boated 5 right away, then I handed a few more off. Most on 30lb, and a couple on 20 after my 30lb needed re-rigged. Then took a short break to re-tie leaders and tie new hooks on. Then I was back at it. The yellowfin were a nice grade, 15 to 25lb.

Line size seemed to matter less than hook size (4 or 2) and a well placed cast. I hooked fish on 20, 30, and 40 with small hooks and a well placed cast. Several guys that were awesome casters or more willing to get into the crowd hooked twice what I did. By 6:30PM the boat was just a few fish short of a 1 day limit when the bite died off.

We all had a great dinner and re-rigged as needed to start the morning fresh. Plan was to move a bit and find some Bluefin.

Next morning started with a stop on smaller Bluefin that quickly turned into yellowfin. Action was just like the night before, wide open yellowfin with a good cast. I even got one on 60lb but went back to lighter line because it was more fun.
I tagged a few more and handed a few off. Bite slowed so we went looking for Bluefin again.

Late afternoon Captain Gavin found a school of nice 40 to 50+lb Bluefin. Bite was a descent Bluefin bite, never wide open but some good moments. Yellowfin were also mixed in and added to the action. I picked up 2 Bluefin on 40lb and a #1 hook and handed off a few yellowfin. A 66lb Bluefin and a 90++lb Bluefin were the two standouts.

Towards dark a few bluefin hit jigs dropped down. Jig type didn't seem to matter as long as it was shiny. After the bite died we went back in for more bait, then back out to the same(ish) spot.

Last day was slower but we still had decent action off and on. I boated 2 more 40++lb Bluefin on 30lb and a #2 hook plus tagged a couple more and handed off some yellowfin. The last day the yellowfin were a nicer 20 to 35lb grade.

By afternoon the fish holds were totally, yes totally, full so the crew were filleting all the fish caught and putting them in the freezer downstairs. The Captain finally shut us down when they completely ran out of room to put fish.

Some of the yellowfin really pulled like bigger fish. The Bluefin I've caught this year all pulled like hell and have been totally squirrelly. Hook size was very important, most of the fish were hooked on #4 and #2 hooks (I straightened a few). I did have a #1 on my 40lb outfit and caught several fish that way. A few fish were hooked on jigs, not all Flatfalls or colt snipers.

The boat is big and rides well 2 bunk rooms is different but I like it. The crew was awesome! Great group of fishermen, some first timers, some outstanding fishermen, a mix of personalities, but really good people. My bro-in-law finally caught his first Bluefin after 3 years of going with me, now he's really hooked! He celebrated with a fine cigar and we shared a sip of Scotch that evening. I would do this trip all over again in a heartbeat! 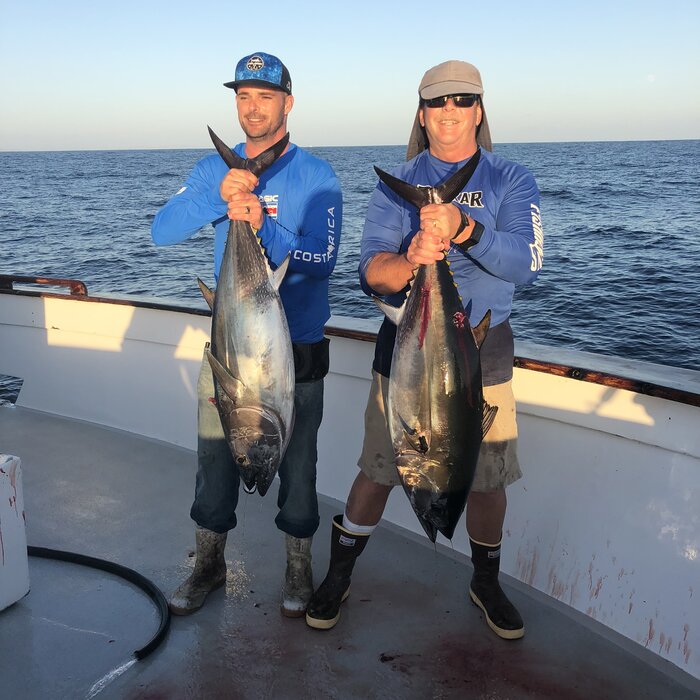 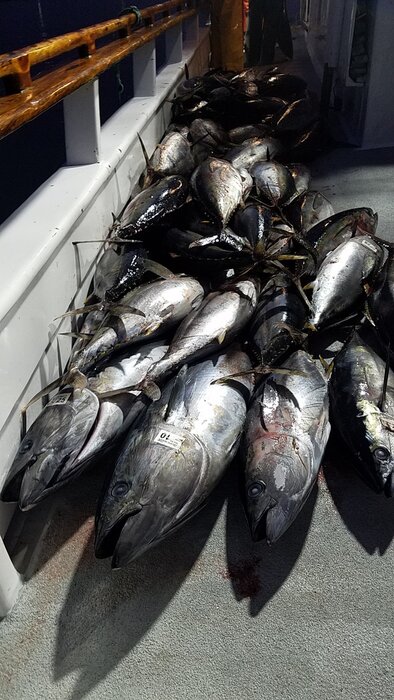 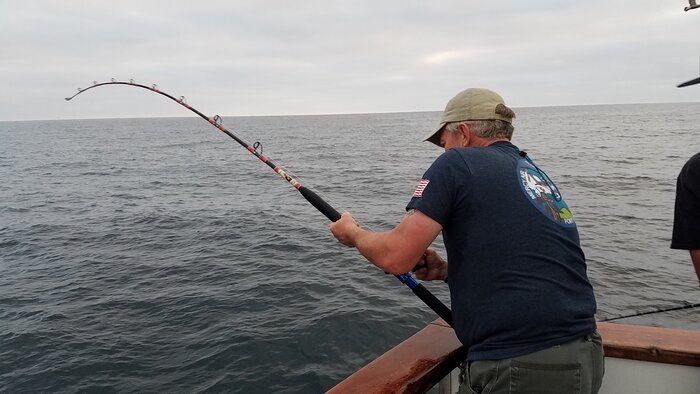 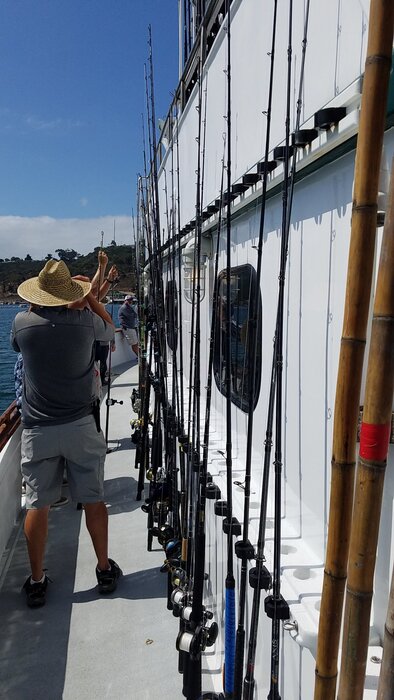 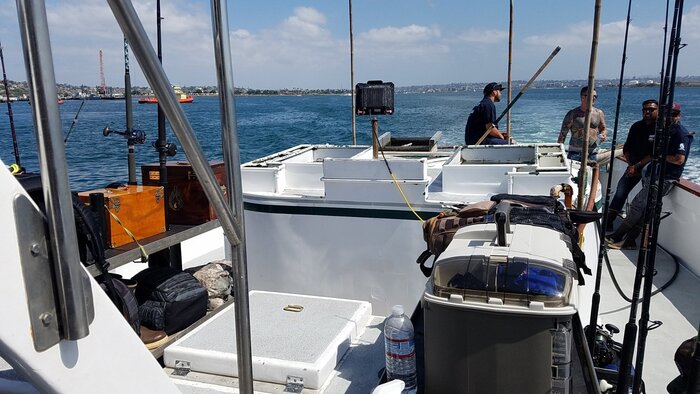 Olddog8 said:
I would do this trip all over again in a heartbeat!
Click to expand...

Awesome stuff, you guys crushed it.

I should add that not all the fish were caught with a well placed cast. Plenty were caught by people just dropping in, not as many but plenty. A hot Bait that either swam straight out or straight down (not under the boat) produced many bites for people. There were times I must of went through 20 Baits to get one that wouldn't swim back under the boat. Keeping your line tight helped entice Baits to swim away but all the Bait bunched under the boat was a magnet to most hooked Baits.

I screwed up many a cast that turned into tuna because my Bait decided to shoot straight down (like I said, down not under the boat) I caught 2 of the Bluefin and several yellowfin this way. A majority of the Bluefin and many yellowfin were also caught on a longer soak. And, dumb ass luck is a powerful thing...
Last edited: Sep 14, 2019
Expand signature
I retired, now I have less time...