I don’t fish much so here’s my long post to hopefully help others, this blog helped me a ton before this trip. I hadn’t fished since 2013 when I got BFT limits on the Pride with Capt Greg Gawitt (was an awesome trip). A wife, couple jobs, 2 kids, and 8 years later my dad convinced me to get back out there with him to get a piece of this historic bite that’s going on. As a kid I had a ton of trips under my belt at the local paddies and 3/4 island trips but not a lot of tuna experience. Frankly, braided line with floro is completely new to me. Back in the day I had always just fly lined bait with straight mono. Needless to say, I spent a ton of time watching YouTube and reading this blog to sharpen up to not ruin both my chances or others around me to get one. For gear, I only had a Sealine 20 and Saltist 35 paired with a 7’ Penn Carnage (Med), but picked up a Penn 40 NLD2 and 6’6” Penn Carnage 50-130 for this trip. Leading up to the trip I saw the massive tuna the PQ was pulling in and knew I would be under gunned so I rented a 100# rig, and was impressed with the landing’s rental quality, was a Calstar rod w/ Talica reel.

I have never flat fall fished before, and I picked up two 300g flat fall jigs and spent time replacing the stock hooks with some owner assist hooks & new swivels and split rings. Mind you, I don’t go often so didn’t want to spend as much dough as I really wanted to. My dad was going to bring everything I could ever need and more with him on the trip so I knew I would be covered with tackle. I planned to use a pink Nomad Buffalo at night, and a Shimano Butterfly zebra to use in the early in the morning when light started to show.

To prepare I put 25# straight mono on my sealine 20 and put it on a Californian rod my dad loaned me. On my Saltist 35 I put 65# braid w/ 100 yds of 40# mono. On my 40 NLD I put 80# braid. My plan was to use the Penn 40 for sinker rigs, so I marked my line similar to how we used to mark our towline on the USCG 47’ motor lifeboats. A black mark for 50’ , a red Mark for 100’ , red & black for 150’ , 2 reds for 200’ and so on and so forth. I marked up to 500’ (I knew that was excessive but figured why the hell not to be safe). I used red and black sharpies and made each mark about 2 inches long with about an inch gap between each. In the end, I loved it but the red sharpie kinda turned my white braid a slight pink hue by the end of the trip (oh well) might go a different route next time but don’t think it’s a big deal because it was really helpful and easy to know my depth.

Now to the trip. We got to the grounds and started fishing at 11:30ish, I was surprised by how early we got there. Overall at night we made 6-8 stops (give or take), we took 1-2 fish on a few stops, and zero on some too. Most of the night fish were in the 100-160# range. I had a tough time being it was my first time flat falling. I was using the rental rig, and had no idea how much mono they put on for top shot so I was just guessing my depth. I got tangled with others, sometimes my fault, and others not my fault just kinda par for the course it seemed. One person had a tuna take a huge circle around about three of us who had zero chance to avoid so I ended up cutting my mono to give him the best shot to land it. Every stop though, we would get a couple people hooked up and the tuna would stop biting. So it was pretty quiet fishing while the others fought theirs. I heard the Tady TSP was the hot jig (didn’t catch the color). In the morning, someone got a 160# on 80lb flyline with 1/0 hook. I kept trying sinker rigs all morning and learned from Bobby the deckhand that I was dropping it too quick. The entire crew of the PQ were some salty guys that straight hustled and kicked ass all day. Fishing went pretty quiet from 11am-2pm. We saw some boils throughout the day but they weren’t very hungry. I changed gears and went to my 65/40 with rig to flyline with floro but had shit luck with my bait.

Later in the afternoon I was getting pretty frustrated because I’m rusty and kept effing up at the critical times. Dropping my bait at the tank, or being late to the rail to get the bait in the right spot at the right time with all the other anglers. But I think the real secret was the galley cook Dave’s dinner. His Cornish game hen with artichoke wine sauce was phenomenal. I think the bluefin loved the scent because right after dinner I finally hooked up on some school fish, my first a 30# and my second a 15#. I was using my sealine 20 with 25lb mono. It ended up being one of the last stops of the trip. I started butt hooking closer to the tail and my two fish were back to back with the bait swimming straight and strong. I was using a ringed circle hook, I think #2 but not sure because it was my dad’s container that wasn’t labeled.

Here’s a crazy story, while I was hooked up with my first fish I was at the bow after going through all the mayhem at the stern and was happy to be away from everyone and was praying my light mono would hold up thinking it might be my last and only shot to get one. Right then someone casts their bait right over me, and with my hot emotions to get this one, I gave him a hard time and told him he should be at the stern. He seemed pretty upset too and said he was just taking orders to be there. After I landed my fish I grabbed a beer and went up to him to apologize for my raw emotions. He proceeds to tell me that right before that he hooked a fish and it ripped his rod into the water and he lost it. Man did I feel like an ass. About 5 min later someone comes up to him asking if he lost his rod, he’s like “yeah” (kinda mad and wondering if they’re going to crack jokes or something), this kid’s like I think they have it on the bow. This guy got tangled in his line and Johnny the deckhand ended up pulling his rod and reel from the water, bait was still on the hook and everything. We could not believe what we just saw, crazy!

The PQ had what I think was a marine gear failure in the afternoon and we were on one engine. I don’t think the crew was eager to hunt for the big ones the last night before our return. People wanted to fish that night, but I’m sure if I were in their shoes with a 3-day trip on deck the next day I’m sure I’d make the same decision. All in all, it was a great trip and I’m gonna get back out more often now. Good luck out there! 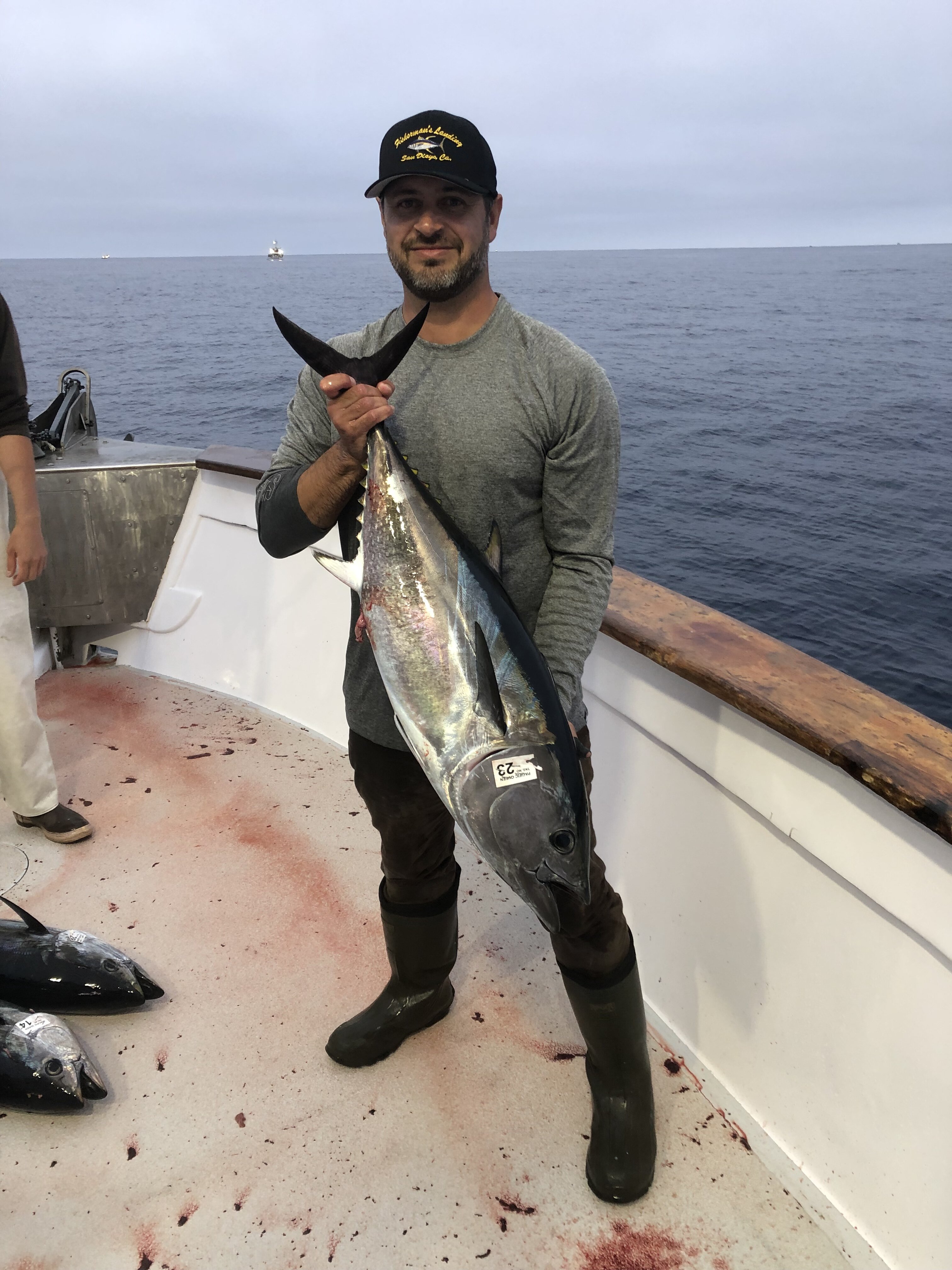 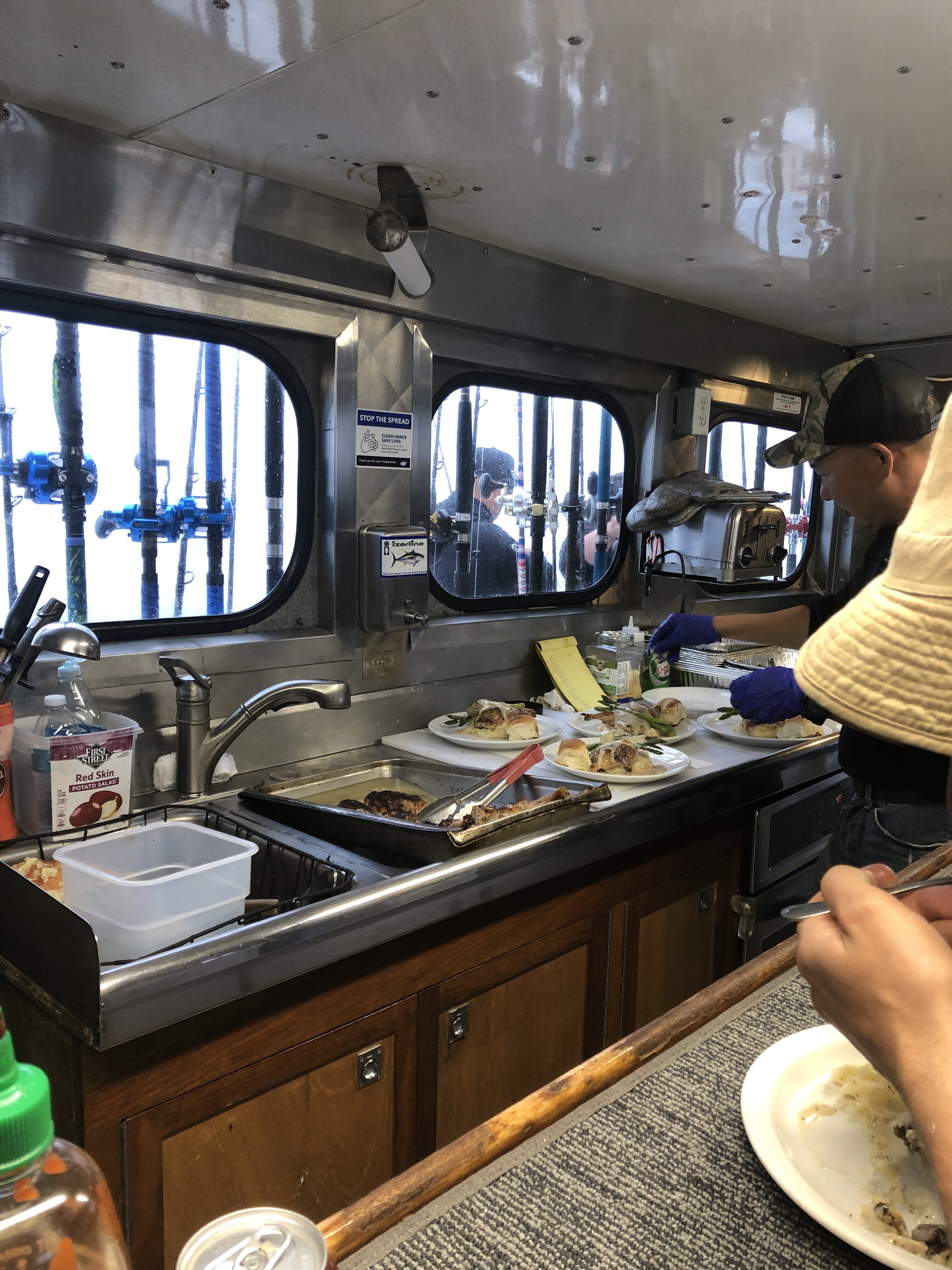 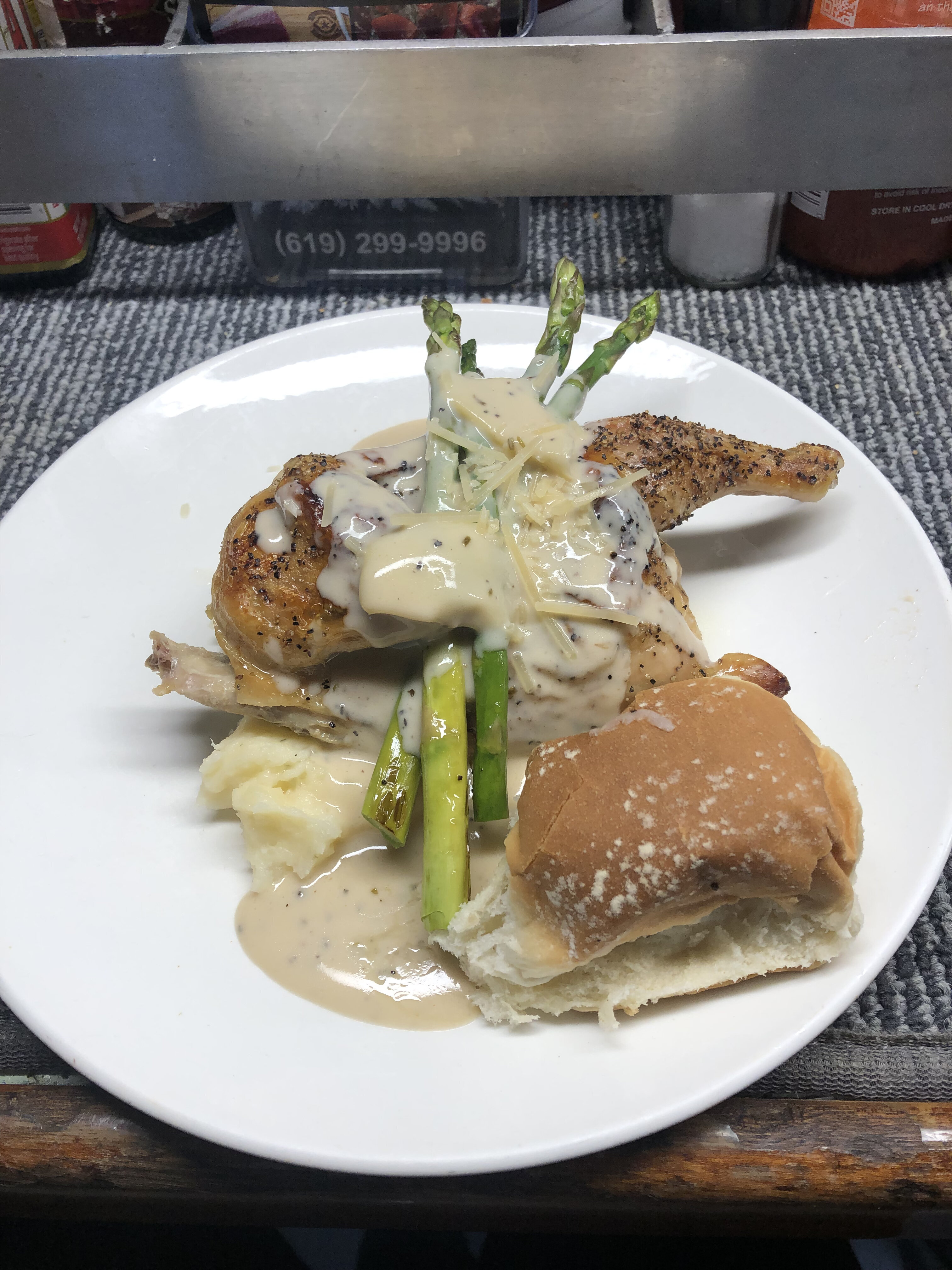 Welcome Aboard. Great Report and pics, info and NICE FISH

Few times over the years seen the Newbies..Beer in one hand, rod and reel in other, reel in gear, drag too tight and KAWHEEEEEE off to the deep goes the rig, beer saved. The facial expression=WTF
Upvote 0
S

I like your fishing story . I love it. I had been there before . { that s a newbies story }
I m happy for you on the fish
Go fishing
Steve P
Upvote 0

Good write up and it was cool to hear how you persevered and got some fish, and also about the other fellow's set-up being recovered. Ooh, and cornish game hens--I liked those even before I saw Eraserhead!

Good fishin'!
BDC OK
Toggle signature
Sometimes you feel like you are absolutely fucked. But then you look at the situation again and it turns out you are only like 40% fucked. --Mingma Gbyabu Sherpa

There we go Fresh one!!
Toggle signature
JC
Upvote 0

Great write up... glad you got one!
Upvote 0

Thanks for the report. Looks like you guys had a ton fun. Dave makes some great food.
Upvote 0
Show hidden low quality content