jumped on the Pacific Islander last night with Captain Steve and headed out to the islands with a full boat of 30 nice folks. We had live squid and anchovies for bait and there had been seabass caught almost every day. I took 3 rings with me. 1) Fathom 25N/Calstar 800M(dropper loop and sliding sinker). 2) Lexa 400/Phenix Abyss 909H(hookup bait). 3) Progear V20/Phenix Black Diamond 909H(Lead head) . I had all of them set up with 30lb flouro to my spectra. As soon as we left the harbor, the "Rodeo Ride" started wind and waves the whole way. All through the night, you would hear the engines throttle down followed by the rise of the bow and subsequent slam afterwards. I tried to get some sleep and had thoughts of how miserable the next day might be ! However, when I woke up at about 4:30, things had smoothed out considerably as we got some island shelter. Folks dragged out of the bunks and we dropped the hook at our first spot.

We sat there for an extended time with no bites. Everyone was fishing dropper loops with squid. The usual overnight boats were in the same area as well and one of the Big Players !

After awhile, the captain decided to go look around. He stopped on a spot and decided to drift on it. I grabbed a dead squid of the cutting board and threw it out on a 1.5 oz leadhead (there was a fair amount of current). It never reached the bottom as I got a solid pick up. Put the reel in gear and it was game on. The fish took me around the boat once and half way back around before he settled straight up and down. Soon I had color and a nice yellow came aboard for me. 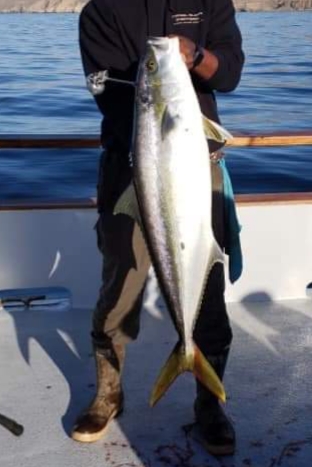 A couple of other guys hooked up and this time we got some Seabass on board. 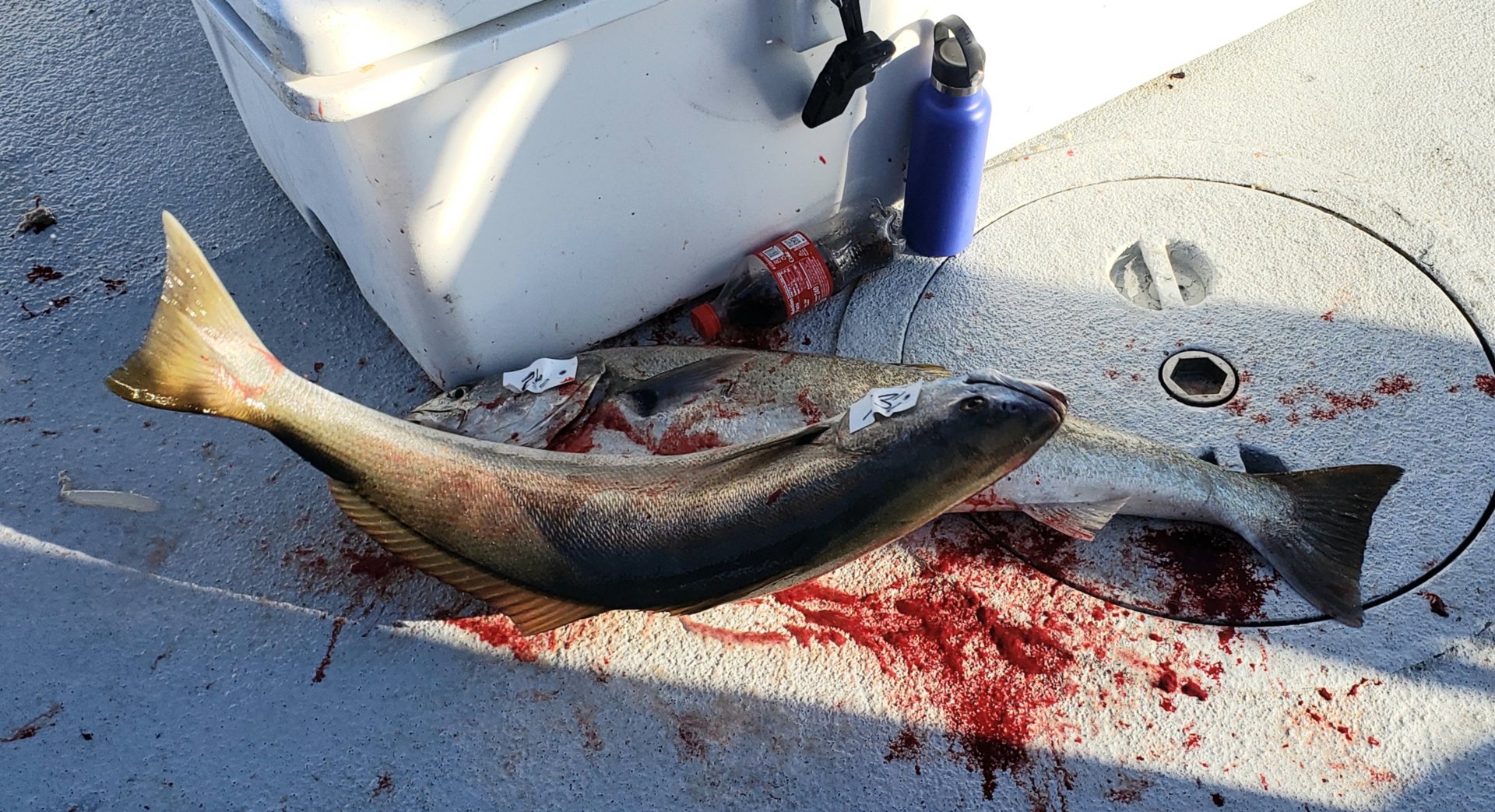 Things slowed down and we ended up doing some bottom fishing on some shallow stones as it was quite windy off the island. Chuckleheads, Blue bass, and Sugar bass were wide open and the sacks were getting filled quickly. Also some big Whitefish were coming over the rail as well as the occasional sheephead. We did get 1 bonus seabass which a guy caught on a paddle tail swimbait. We were coming up on mid day when the captain got back on the hunt for the exotics. We anchored up on a spot and tossed out a squid on a 1/2oz slider rig. The current took my bait out away from the boat an I soon felt a little peck like a whitefish. Another peck. I tightened up and on the next peck I wound down and set the hook. There was a guy next to me who set the hook on a fish also. These were no whitefish as they immediately started taking drag. We both did a quick dance to get around each other and our fish went their separate ways. I got my fish to color an it was a nice croaker ! I was stoked as it's been a few years since I've been able to get one on the boat. The other guys fish ended up being another yellowtail.

We drifted a few more spots, one being straight soupfin sharks with about 4 being brought to the boat and about the same amount breaking people off. We also got into some monster sheephead. Some of the biggest I've seen with several models landed.

We hooked a few more seabass and the last drift gave up one last yellow and seabass before we had to head home.

We had to work hard for our exotics but the crew was great and Capt Steve fished hard. Everyone came home with plenty of fish. I ended up with a limit of rockfish, two sheephead, a yellow, a seabass , and a nice sole so we'll be eating well for a bit.
Take care ! 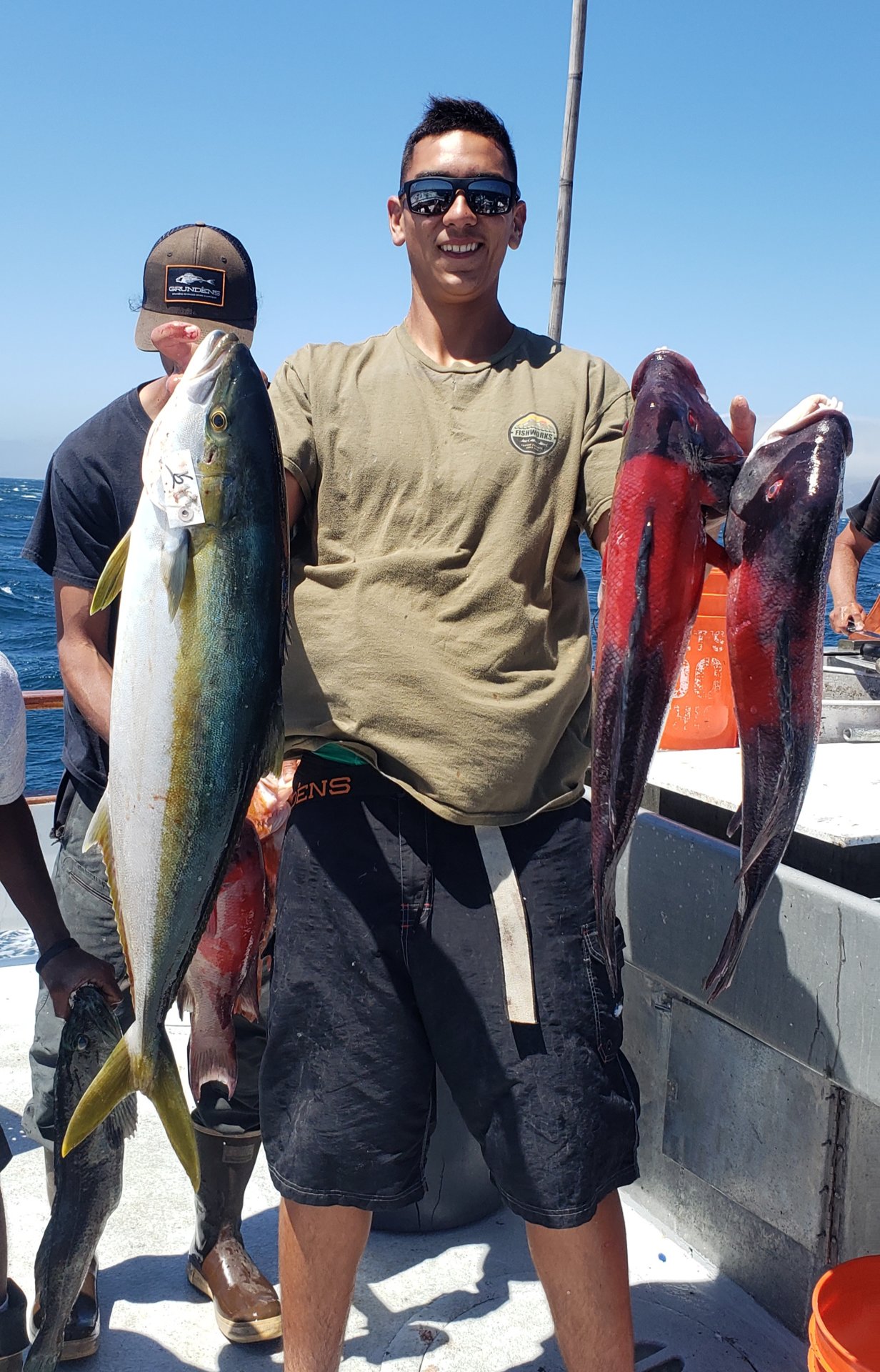 Note: The boat has a RSW. Fish get bled and placed in cooler during the bite and then drooped in the hold during the lull. These pics were taken as fish were waiting the be cut. 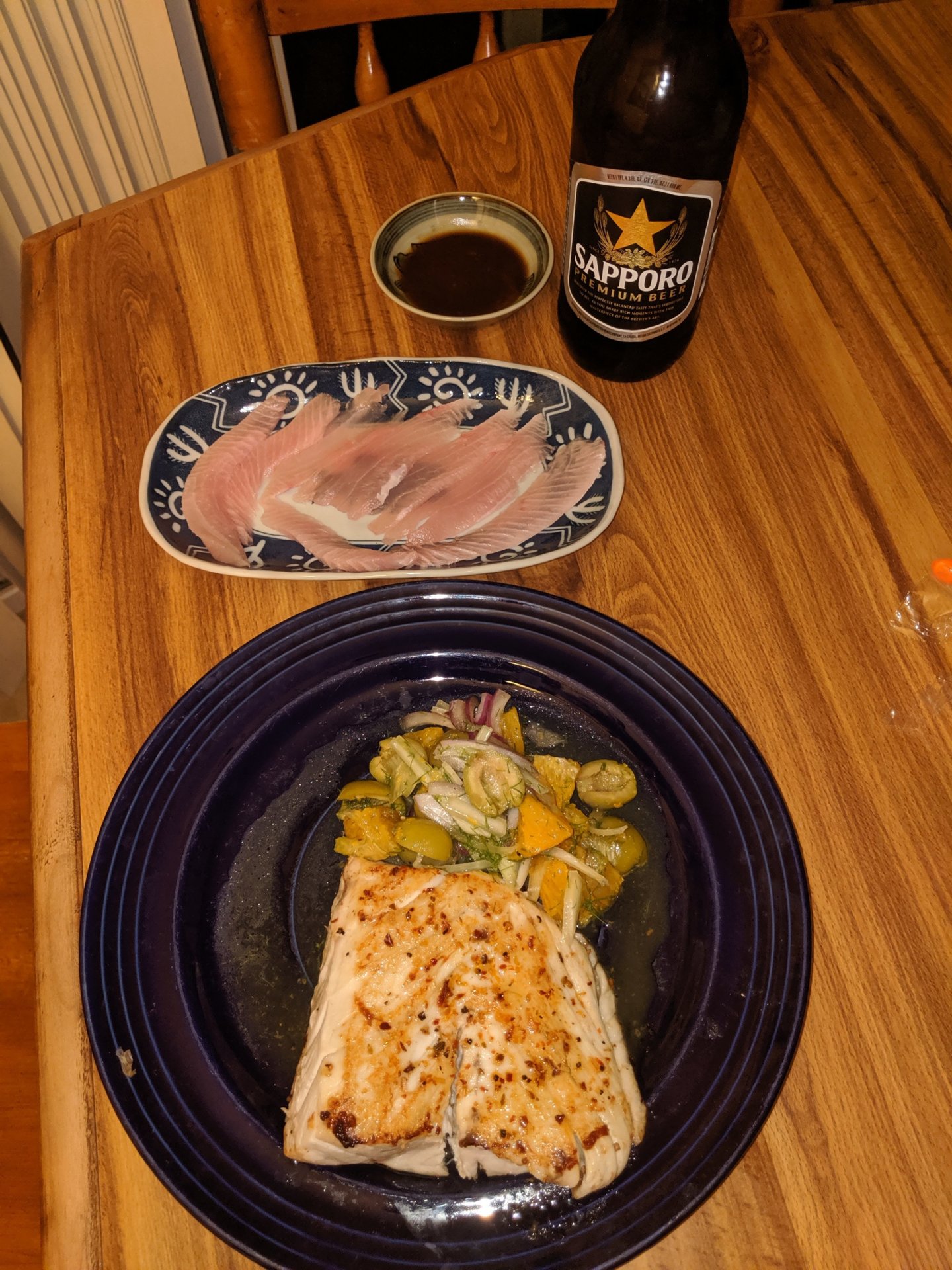