Thursday night I believe we left Seaforth at around 8:30 and to be honest I can’t even remember if the boat stopped for bait or if they were loaded up. I was too excited for the hot bite so I threw my stuff on the bunk and instantly started tying up. I want to say boat was baited already. Heading south towards Ensenada I decided to crash early along with most people on the boat.

Boom! Just like that we are woken up at 3:30am Friday by night Capt Charlie saying “Let’s catch some cows”. Dropping flatfalls and knife jigs people are already starting to get bit at least 3,4 or 5 going at all times. Some casualties but most people landed their fish 50-140lb. Don’t remember how many and you’ll know why shortly. My buddy Tom landed two that early morning around 40lb and 60lb on his virgin Tac 25 and grafighter. Great way to break in a setup! No bites for me yet 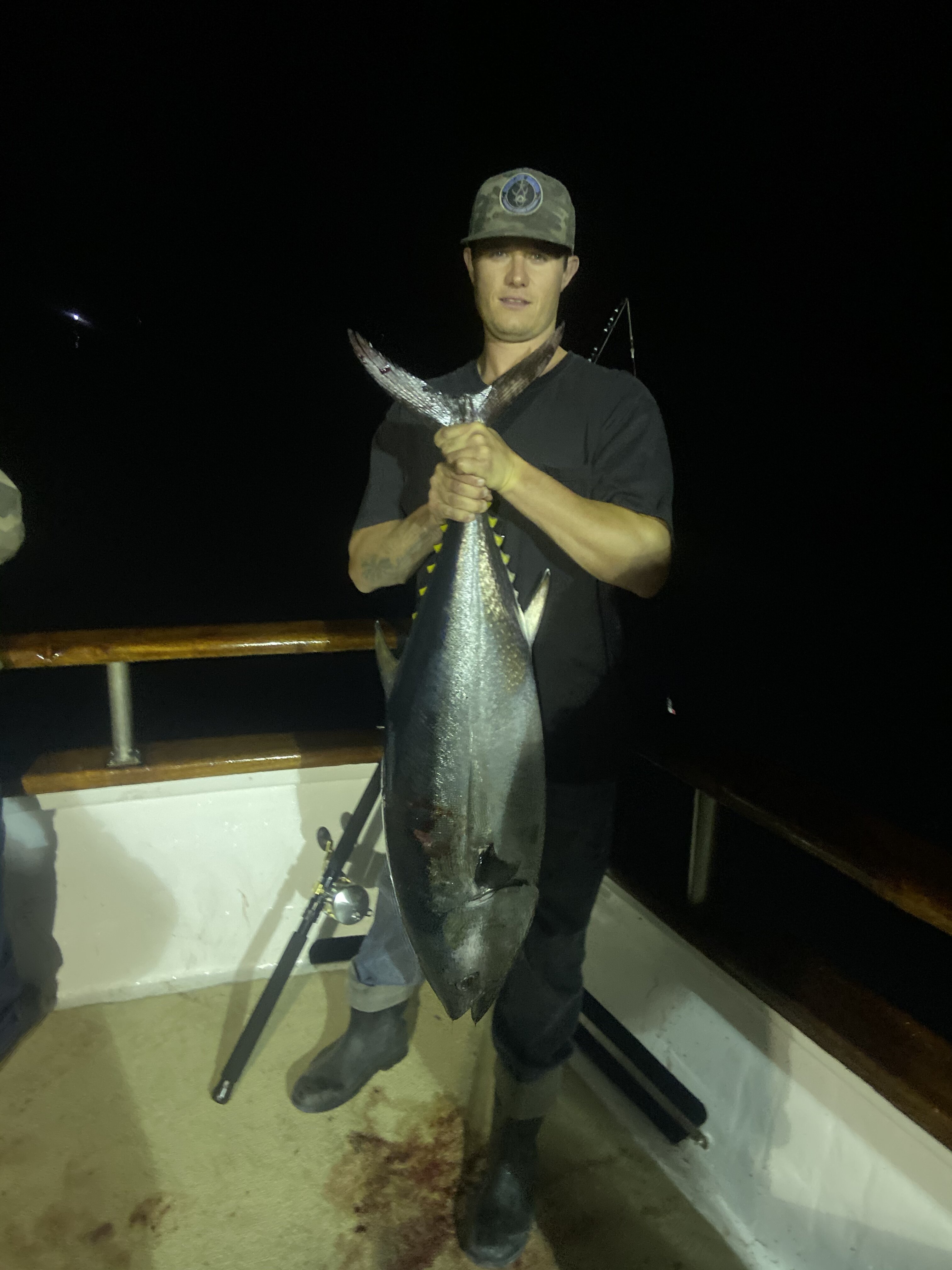 Sun starts to come up and they are still biting pretty well but now it’s the sinker rig 50lb and 60lb. Few still getting hit on the jigs here and there but mostly dropping 180-300ft on the sinker rig. My other buddy Keegan decided to flyline with 40lb and got picked up by a easily 120-130lber and man it tore him a new one lol this one was mean but gaffed after 2 hours. Had some help from Mitch but Keegan killed it. Shortly after that Chartermaster Dave hooks a bigger bitch on a knife jig 60lb and
gaffed after 1.5 hours. Taped at 187lb weighed in at like 160 something after gilled and gutted. Noon comes around still not a single bite for me. I still ate breakfast and lunch but went straight back out the rail instantly for my opportunity.
Keegan’s fish on 40lb 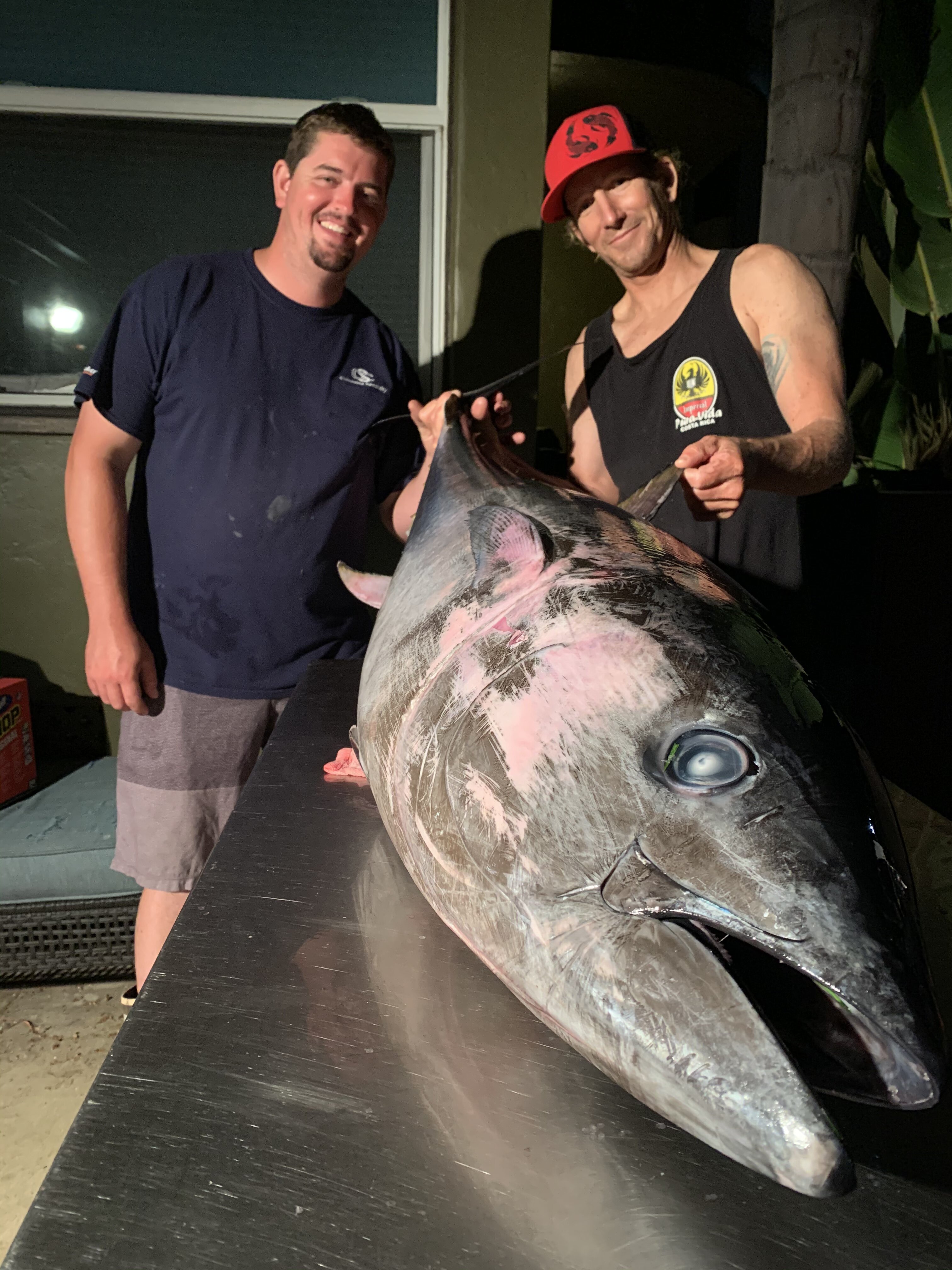 Moving on stop by stop fish are still being hooked here and there all freakin day long. I’d called it a short plunker drift. I’m getting frustrated but keeping my head held high it’s bluefin I know how they are. At this point it’s about dark and almost everybody on the boat has had a fish, some 2 or 3, or at least a bite or even bent for a few seconds before the hook pulled. Not me, still have not been touched. I eat dinner, I’m heated inside, I’m back on the rail. I did not fuck around all day long was very persistent so eager to get one over a 100. PB at the moment was 50lb. I move back to flatfalls until about 10:30 until I couldn’t stand up anymore and hit the sack pissed!


This is the flatfall I threw the first half of the trip and couldn’t get bit on it on 100lb setup. Mark recommended rigging our jigs this way 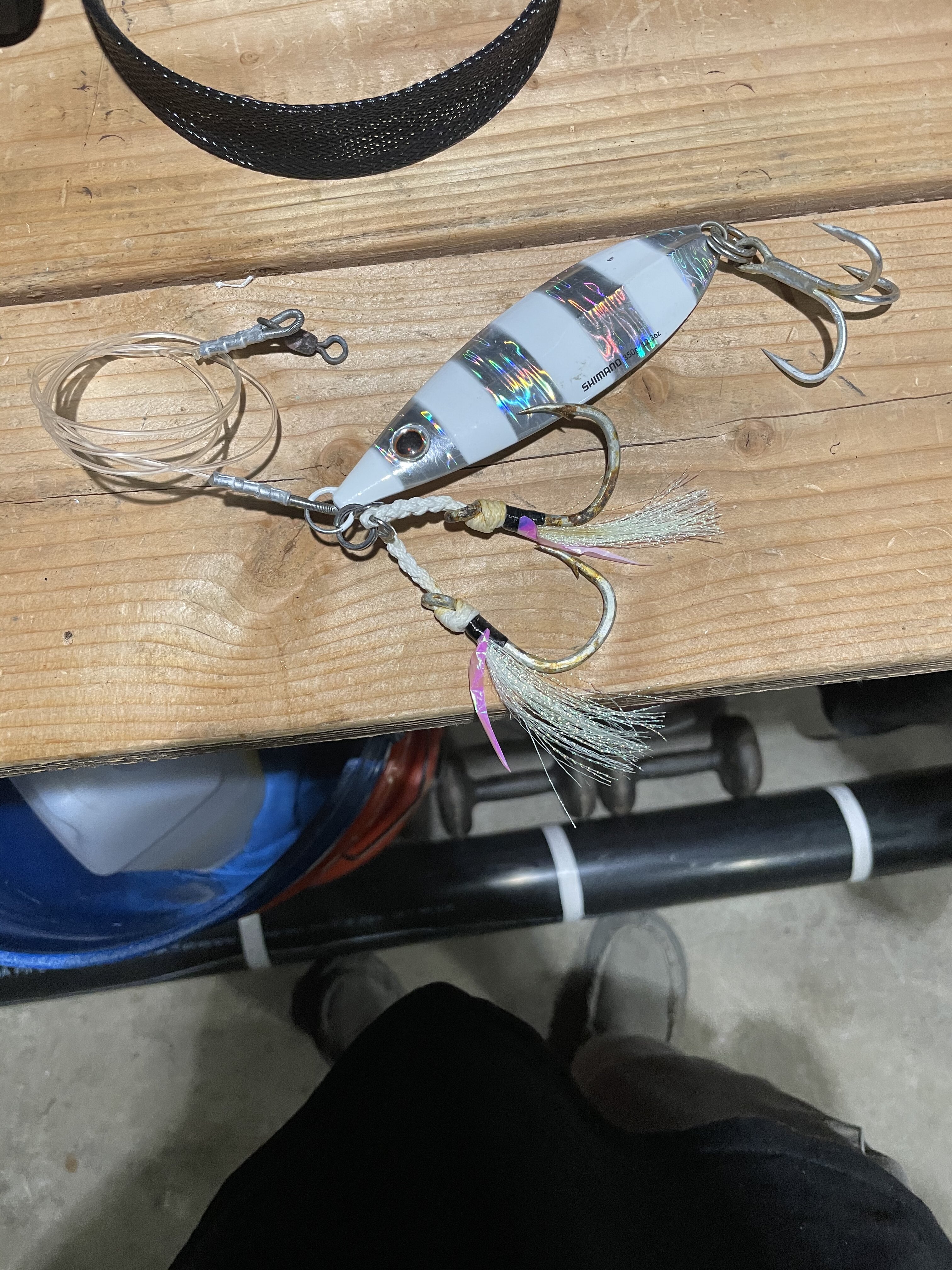 Boom! Again woken up Saturday morning except at 12am this time. I’m up along with 5 other people. Everybody else is dead asleep from brute bft. 12:30am comes along I’m bit on retrieve! I was fucken heated from the Friday skunk and I look at my buddy Dan-O and tell him “ I’m fucken killing this thing”. 44lber straight to the boat in 2 minutes. I pulled hard to relieve anger. I had dropped down to my 60lb with a smaller jig 160 gram. I moved the factory assist hooks to the top (I know trash) with a single hook on bottom 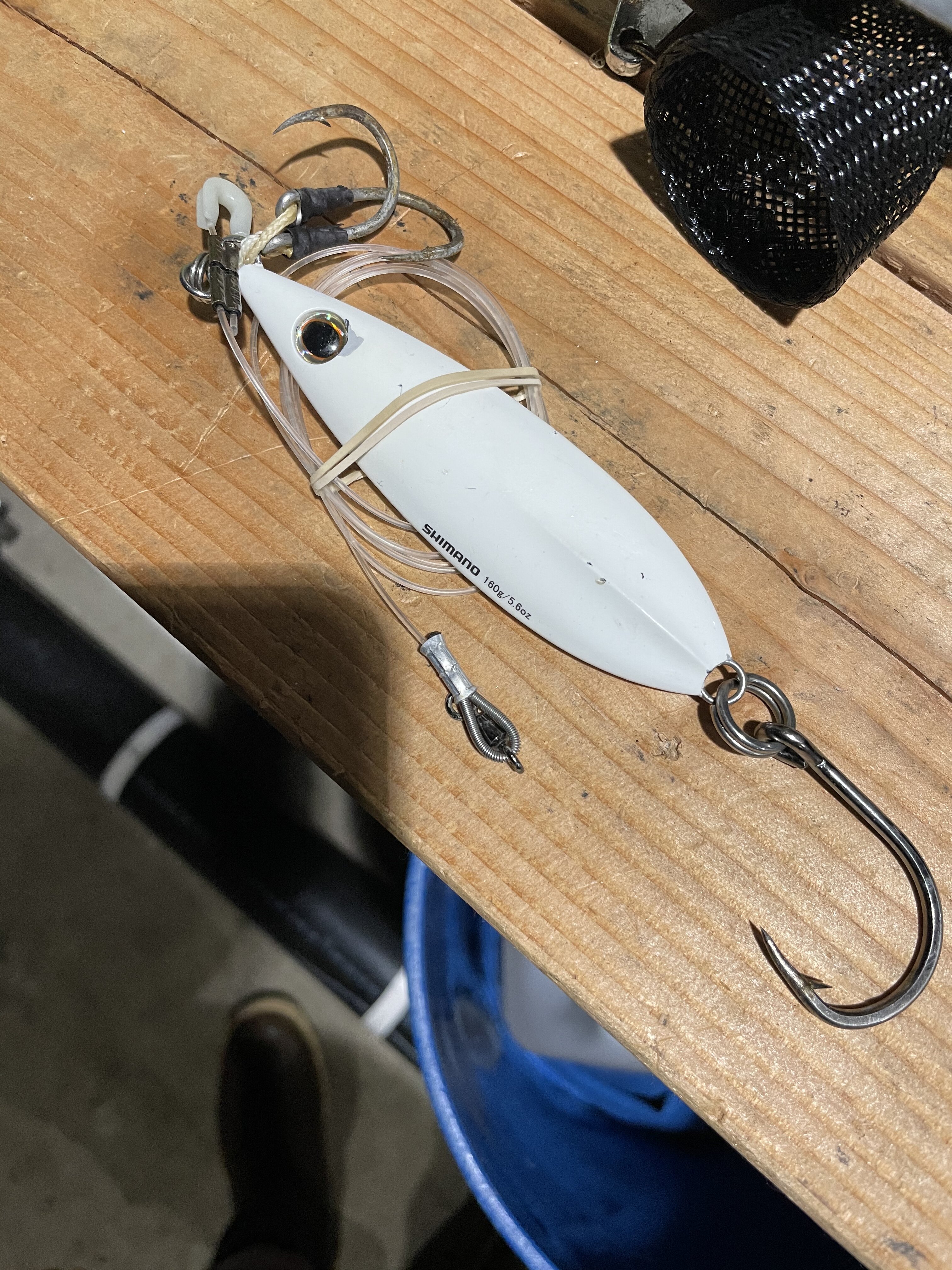 Now I’m wide awake excited I got my skunk off at least and cracked my first smile in a while! We moved a couple spots 2:30am comes and Charlie says alright guys wind in nothing hanging out here anymore. Im taking to my buddy Trevor and bullshitting winding Im not paying attention and rod hits the rail. Biter! I felt this one instantly it was much bigger. Hooked at the starboard stern corner, up the boat halfway starboard side, back down to port side stern corner, gaffed in under 10 minutes. 105lbs. Somebody needs to tell me how that happened? I couldn’t believe how quickly I got it in. I pulled hard but 105lb bft is still 105lb. I used my makaira 15t with a seeker 6480xh factory black steel. 60lb mono tied to swivel on 200lb leader on the same white 160 gram flatfall. I was finally rewarded with my trip digit fish after fishing from 3am Friday to 3am Sat basically nonstop with a couple power naps. I guess I just got the nice bft that wanted to die! I’m just absolutely beat from fishing all day which is why I don’t remember much of what went on the previous morning. 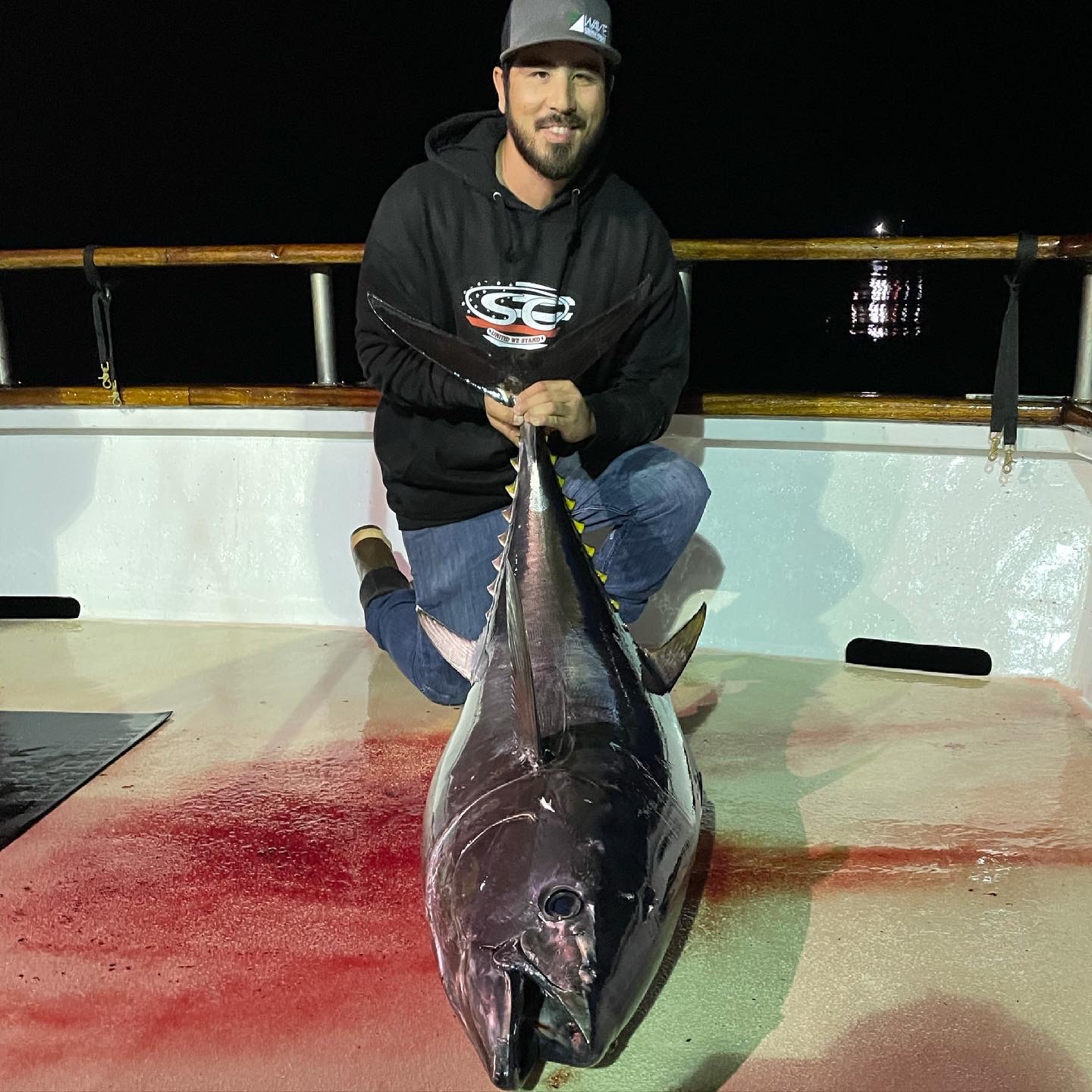 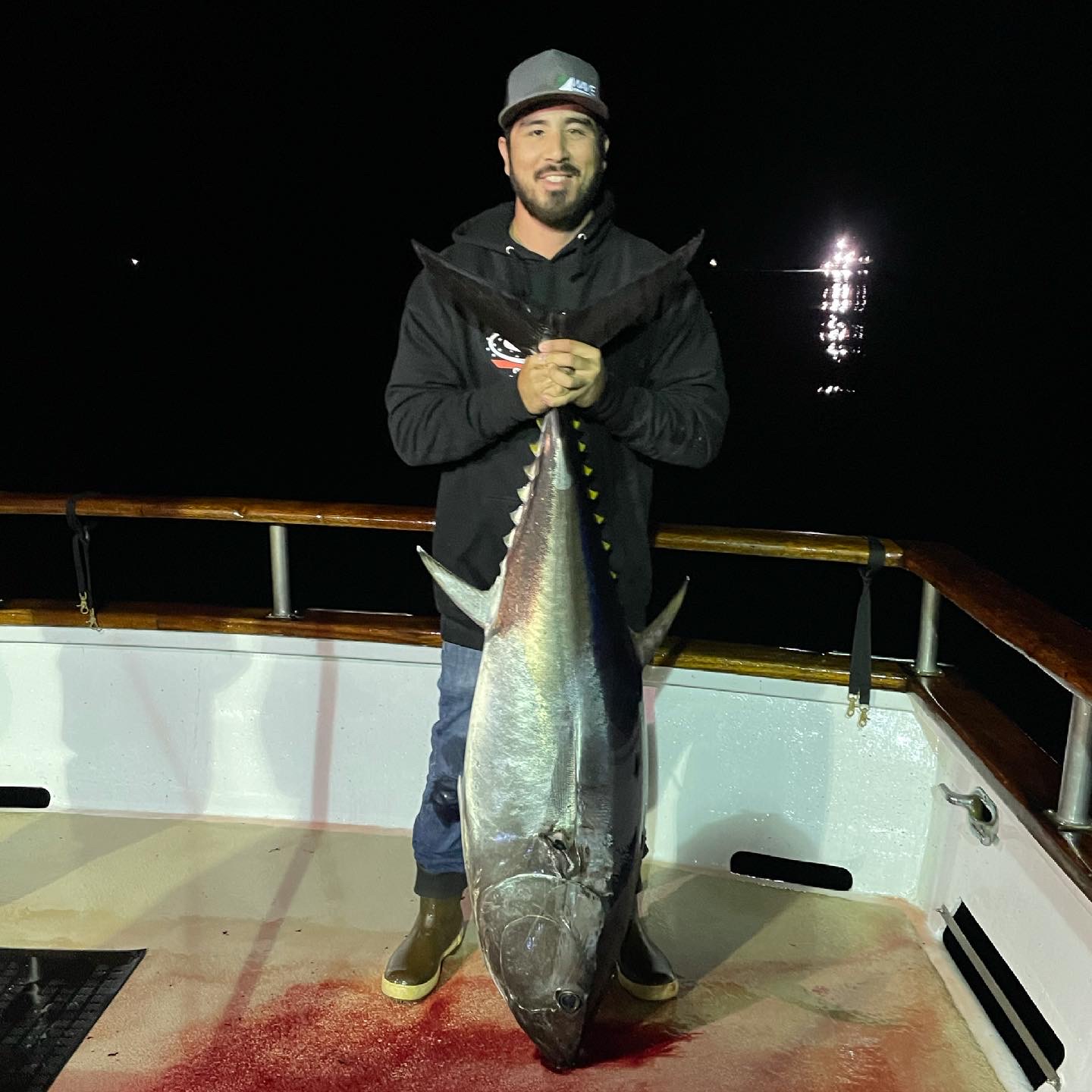 boat ended up with around 50 bft and a few yellows. We were blessed with beautiful weather. One trip I won’t forget 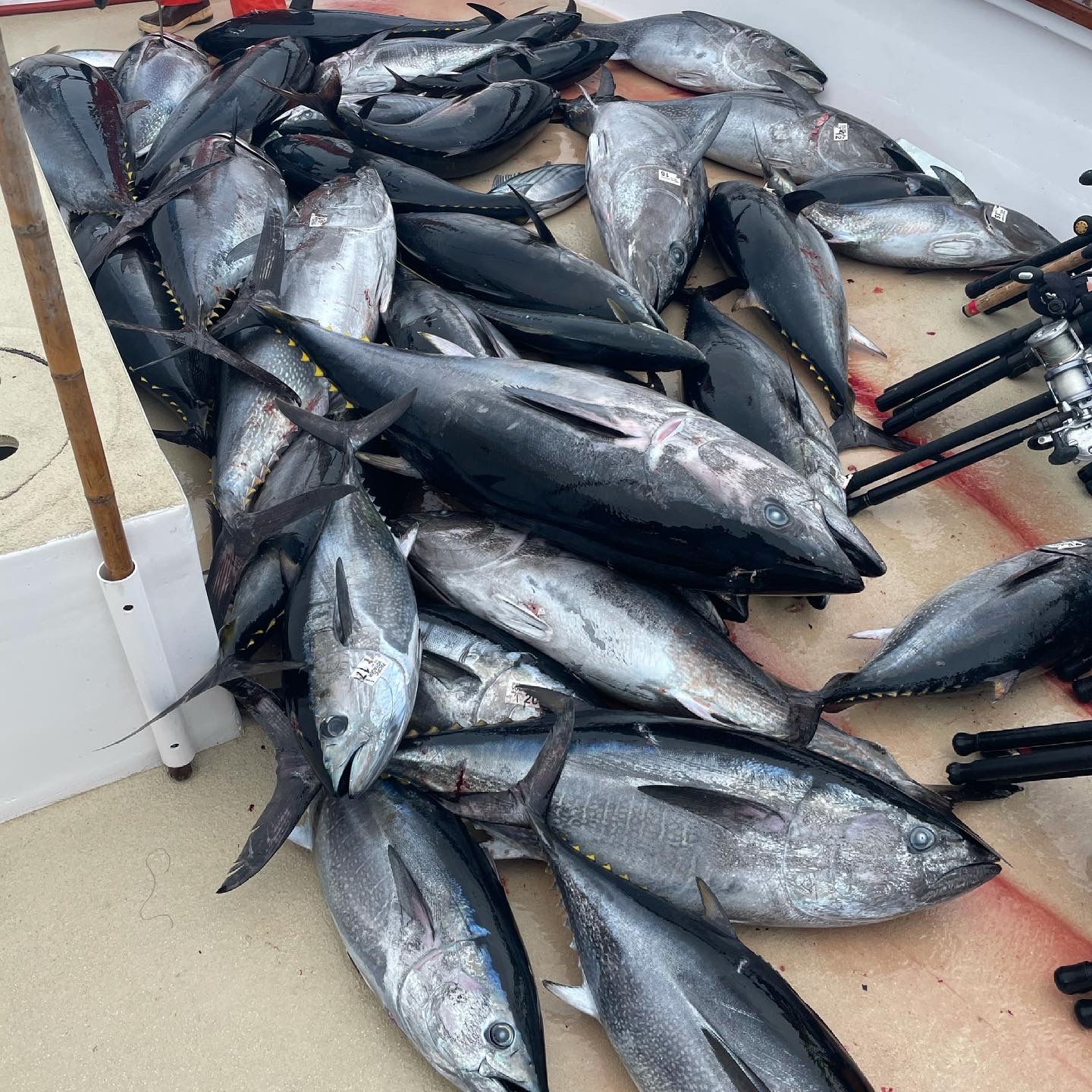 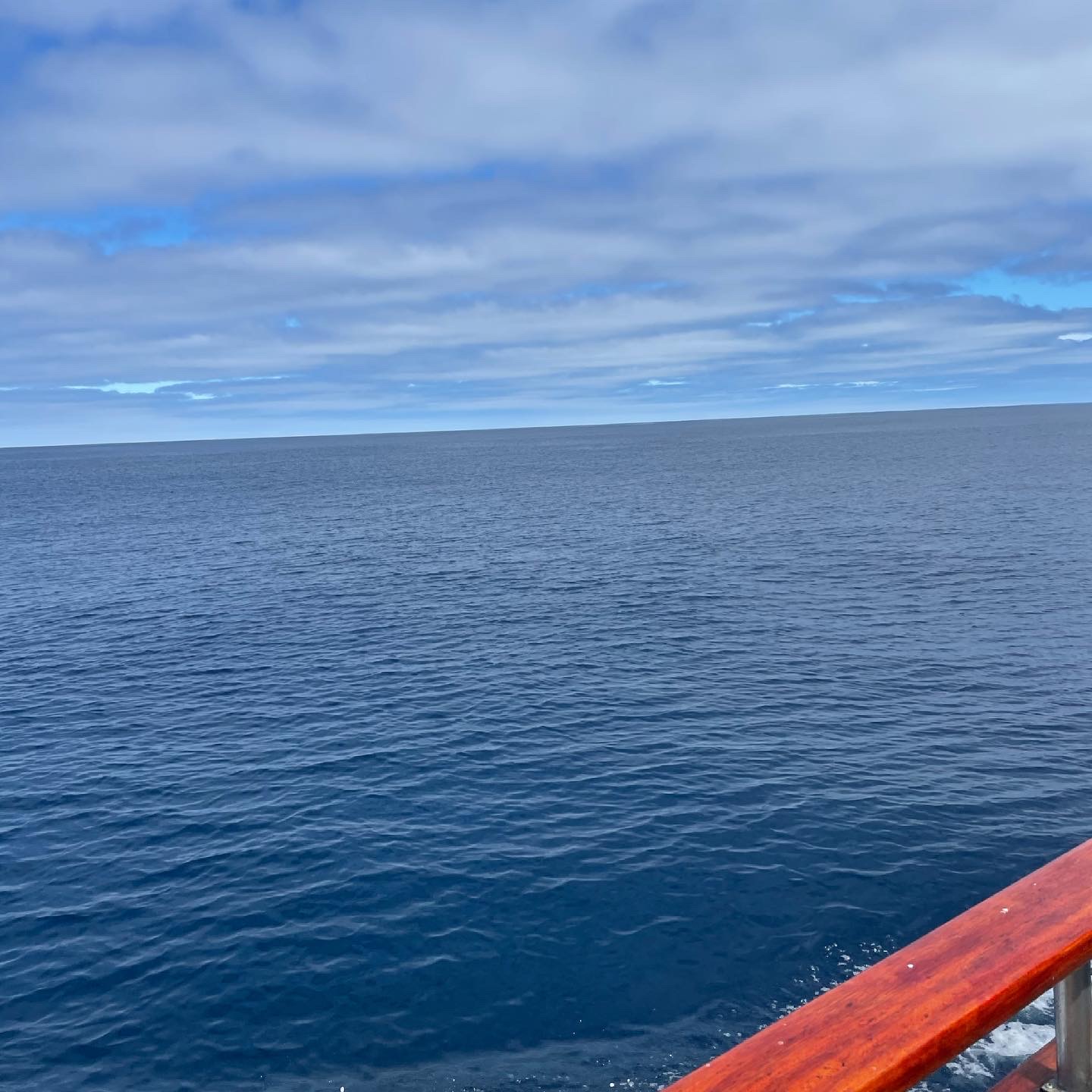 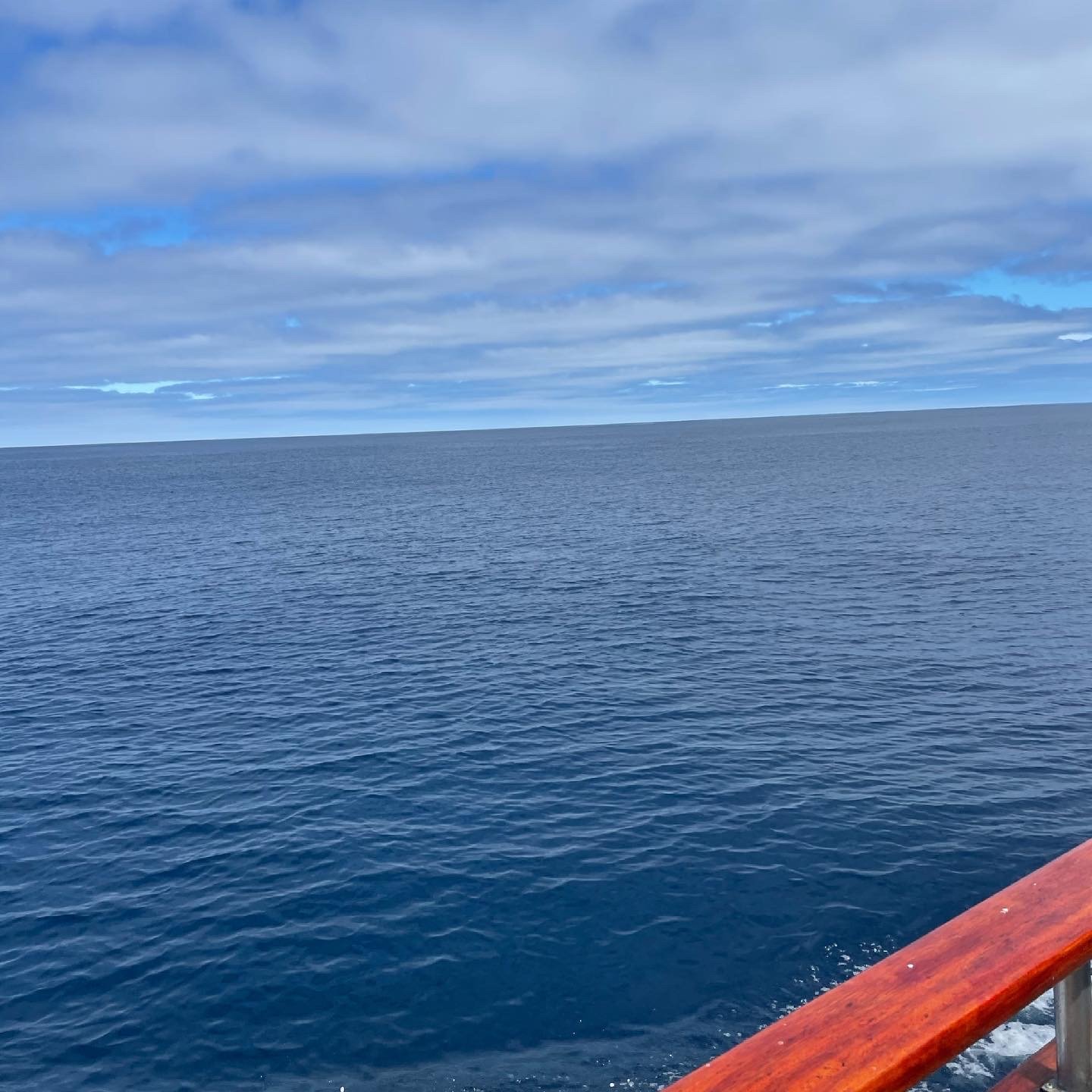 Nice write up. Seems like you have to come prepared to fish 24/7.
Toggle signature

Nice going! Those conditions sure look a lot different than what we experienced on Memorial Day weekend!
Toggle signature
When I was your age, Pluto was a planet.
Reactions: terryc., MattFred1414 and Josh_11
Upvote 0

Josh, don't know how to reply to a reply? Yes it paid off! 120#, 125# and 185# on a 300 gram SK jig! All Personal Bests for me. I'm still pretty new to your San Diego fishery. I have posted this pic so many times now I think the moderators are going to ban me! Still smiling 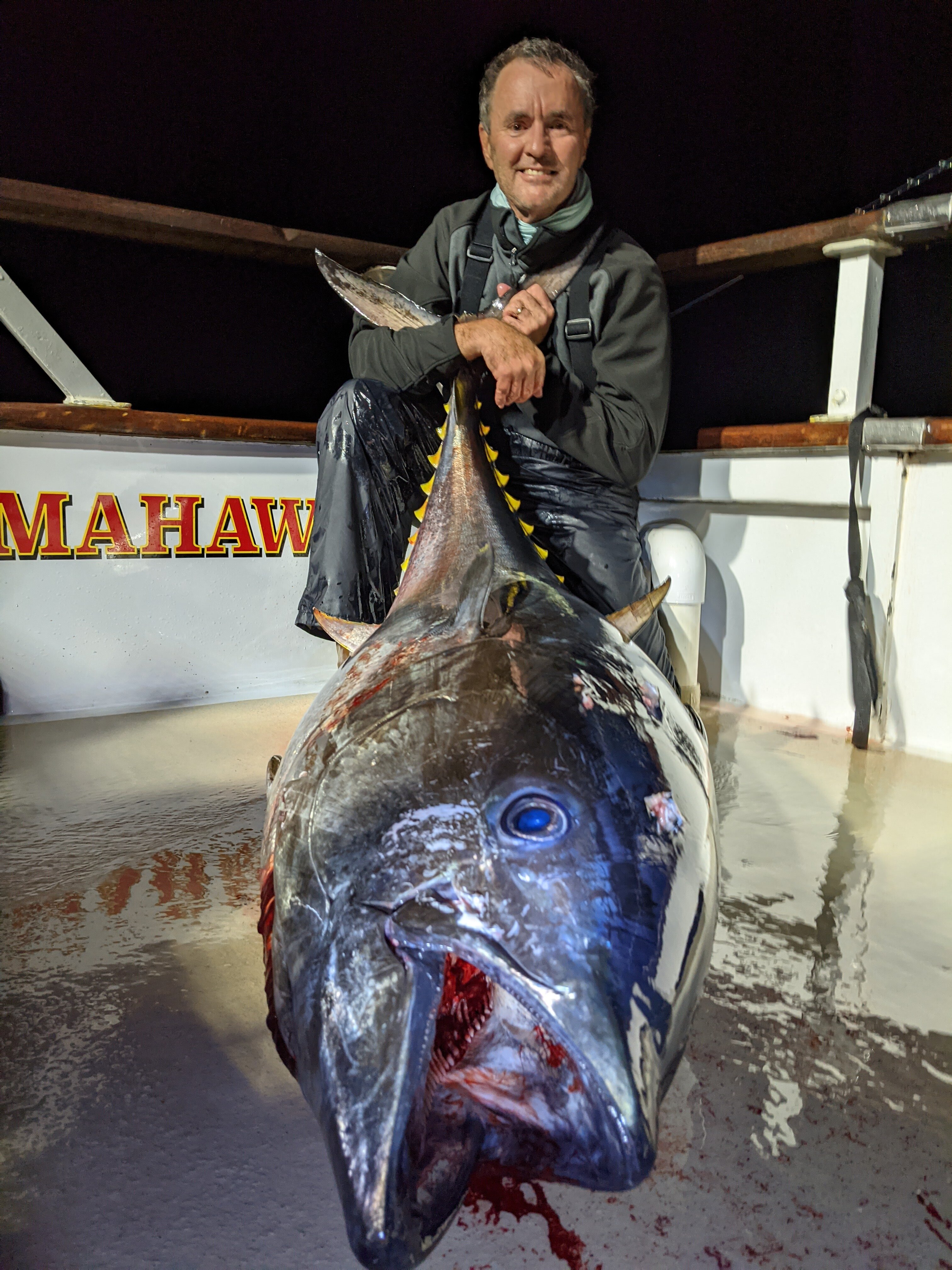 Congrats on the PB! Way to stick it out. Great detailed report.
Reactions: Josh_11
Upvote 0

It was a fun trip. The weather was beautiful, the fish were biting, the food was good, the crew did an excellent job and it was a great group of guys to fish with. It has been several days now and I am still sore and tired.
Reactions: One_Leg, Tom123, TOTW and 2 others
Upvote 0

GREAT REPORT and pics Josh and NICE FISH everyone. Way to stick it out and get bit Josh. Damn Bluefin...

Josh, don't know how to reply to a reply? Yes it paid off! 120#, 125# and 185# on a 300 gram SK jig! All Personal Bests for me. I'm still pretty new to your San Diego fishery. I have posted this pic so many times now I think the moderators are going to ban me! Still smiling

That’s a killer photo dude. What to do with all that meat now!

I caught a 105# on Memorial Day and got it to the gaff in under 20 minutes. I think if you put the hurt on them you can get them to the boat. My setup was smaller (Speedmaster 16ii on a 8’2” 30-80# Phenix axis 100# to the jig).
My other fish got to the gaff in under ten minutes. I think you just have to pull hard on them. But what do I know after two bluefin lmfao
Reactions: kbray001, terryc. and Josh_11
Upvote 0

Man, you really deserved that fish! And who cares if it didn't take that long. Kill em fast so they don't kill you!

Big congratulations on your trip! Nice report, way to hang in there. And you will find after another couple of dozen big tuna that every one is an individual. Night fishing especially, many seem to be easily disoriented. Back a couple of decades ago when we were catching big yellowfin in the small hours, some were what we called "kamikazi" because they seemed to charge the boat, coming to the lights like moths. A couple of 300 pounders were caught in less than ten minutes. And sub-200's we would often have to put skiffs into the water to chase them in the daytime. You never can tell.
Reactions: JamesZ, Tunahead, Tom123 and 4 others
Upvote 0
D

Great write up! Welcome to the BFT club. The fish and the fishermen are all weird. It's what we do.......
Toggle signature
Yale Combs

Congrats on your BFT! Thanks for sharing your report. Good job on fishing hard and it paid off.
Reactions: Josh_11
Upvote 0

Thanks for the nice write up. Nice photos with the calm ocean.
Upvote 0
Show hidden low quality content
You must log in or register to reply here.