Outgoing Tide and a Slug

My brother's time in town is coming to a close soon so we are hitting it whenever time permits. The water is still not quite right (I.e. beach pitch, surge, wind, kelp/grass, and water temp), but we had a small window today, and yesterday, where some opportunities materialized. It is a weird time right now as the Corbina are here, just not in the numbers I am hoping we see soon. The spotties are all over, but, as the name suggests, the bite is spotty. However, both species of slugs are in. We switched it up a bit on rigs and tried to focus on the bigger fish, only. My bro had no real surf fishing experience prior to his visit a few weeks ago. As of this writing he has now caught the biggest spotty my surf fish buddies have ever seen (in addition to several good ones), got (2) perch over 12" (one was well over), and now has (2) Corbina over 22" (and several more under the 20" mark).

This visit he has been picking up how to read water, find good baits, and is beginning to excel at casting where the fish will be, not where they are. Previously, he was pounding a spot a bit too much, like I did when I started. However, my incessant yammering about picking a spot has really paid off. He out-fished me two days in a row, and did so in emphatic fashion. Yesterday he put up a slab perch, (2) nice Corbina, and (3) Yellowfin Croaker in pretty bad conditions. I got skunked and nearly broke my rod slamming it in the water when I would miss a fish ... several times. It is hard to describe how bad my day was. I was finding big fish, was able to get close, and then would absolutely blow it either by spooking the fish on my cast, or jack hammering the bait out of the fish's mouth on a bass-show hook set. Just rookie ball. I completely fell apart, and my tantrums increased in severity throughout the day. Pretty sure some tourists aren't coming back to San Diego after the show I gave them. But, I was both stoked for him and proud of him when he was landing fish. Seeing your brother get that stoked on catching a good Corbina is pretty cool.

Today the ass-kicking and tantrums continued. My brother hooked the bigger Corbina pictured below (1st pic) about 15 minutes into our session, and played it about perfect. It was a slug, in every sense. Well past my 22" mark and just a tank. Similar to my fish last week, it went west after he hooked it on a blistering run into deeper water. He turned it, but it went ballistic in the skinny water ripping off a few good runs prior to beaching. Awesome. He then landed an absolute slug of a perch, unfortunately not pictured. Not sure how long it was, but it was as big a perch as I have ever seen where we usually fish. I finally got a decent spotty at the very end of the session, but the route was on as he landed a nice Yellowfin shortly thereafter. Conditions were cleaning up in the evening as the wind died, but we had to bail.

Fish were caught on sand crabs, but the bigger crabs were working better for some reason. Fun stuff. Again, not Bluefin or cool Offshore stuff, but tough to beat when you are boat-less and short on time. Go get em. 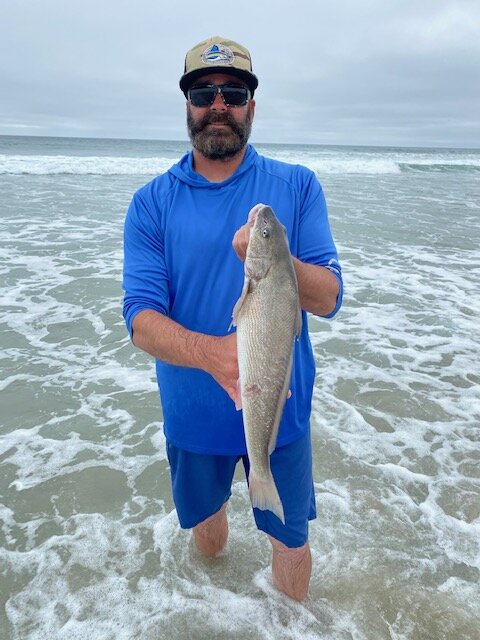 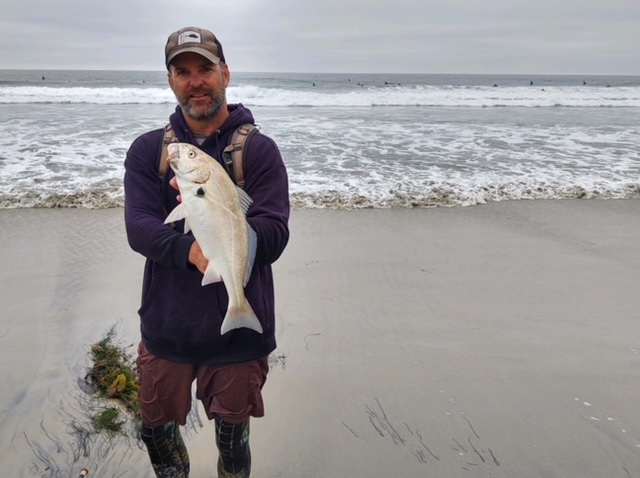 Anello said:
Fish were caught on sand crabs, but the bigger crabs were working better for some reason. Fun stuff. Again, not Bluefin or cool Offshore stuff, but tough to beat when you are boat-less and short on time. Go get em.
Click to expand...

Catching any fish is a good thing, good report, nice fish, thank you for sharing!

Let'a have a better day today, than we had the other time.
Reactions: Anello and Crib
Upvote 0

I have been surf fishing Torre Pines with the sand crabs and all I can catch are some short surf perch and aquarium size corbina, so I can definitely appreciate catching those better fish when they start snapping.
Reactions: Crib and Anello
Upvote 0

Reactions: Anello and Crib
Upvote 0
Show hidden low quality content
You must log in or register to reply here.

A Couple Slugs at High Tide

A Few Decent Ones This Week

Upvote 0
C
Um Guys, Get out there, their biting

THIS is what Fishing is ALL ABOUT