Once in a lifetime….

They say you may be lucky enough to have a “once in a lifetime dog”. I must say I am fortunate enough to have the pleasure of owning one. Casey is 12 1/2 years old. A few weeks ago I thought I was going to have to put him down. He wasn’t eating, was really lethargic and had a cough. What he did eat he would puke within the hour.

A few trips to the vet revealed a possible tumor on his spleen and kidney failure. I almost put him down 3 weeks ago before leaving for a Wisconsin archery WT hunt. Glad my wife talked me out of it. I really wanted to hunt him for the pheasant opener when I got back and get him “one last bird”

I’ve been in the IV for the last several days and he is a machine. Killed 4 roosters and missed one, along with a few wild flushes from my pup who has caused some errors and still learning without honoring Casey’s point. The joys of training a new dog.

I’ve heard it said upland hunters measure their lives by their dogs. Casey is my 6th gun dog. Everything he’s has ever done was to please me. By far the best dog I have ever had the pleasure of hunting over.

If my pup becomes half the dog he is I’ll be thrilled. 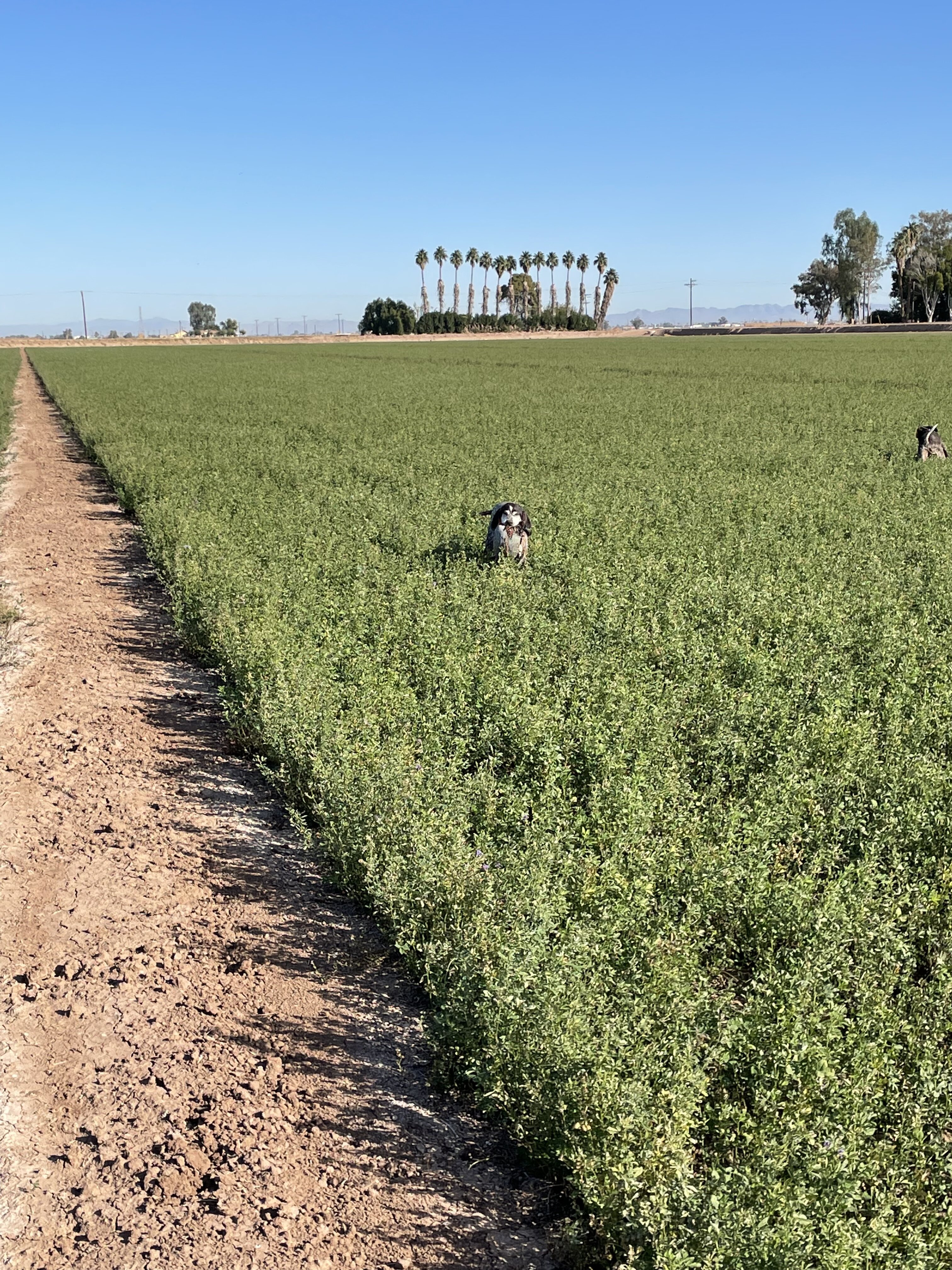 Reactions: the SLIDER, mark johnsen, jiggermyster and 18 others
Upvote 1

I lucked out with #1. Trained him through HRCH and MH. I’d rather watch him do his thing than actually shoot birds myself. I pretty much retired the shotgun when I retired him. His last “hunts” (shot a pigeon out of the barn and planted one other for him in the upland field) are only 2 of tons of memories he gave me.

His last bird and last prime ribeye. 10 years ago next May 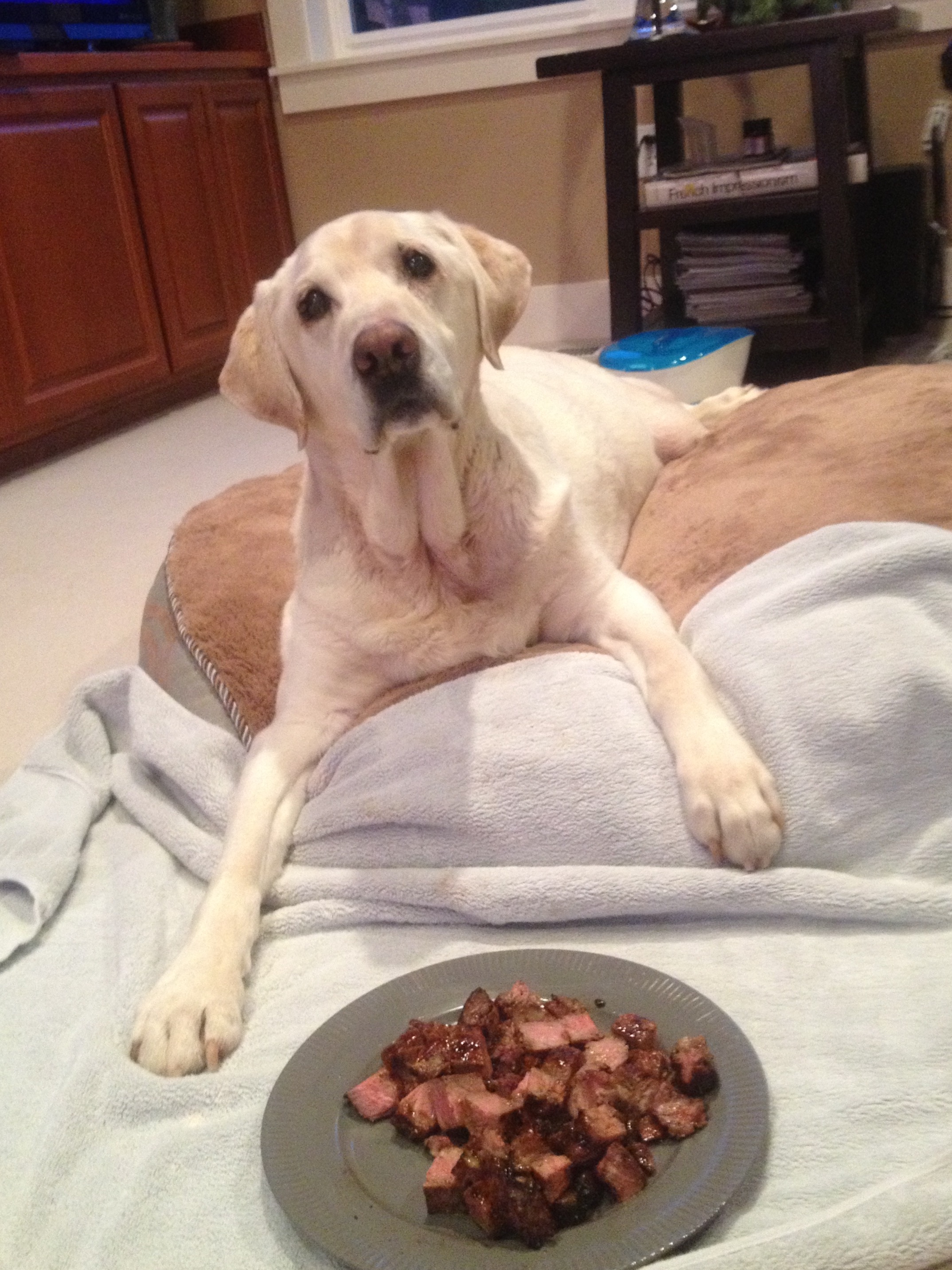 I've got a 17 year old lab mix and a 6 month old GSP pup. I can't believe the amount of life that little pup has given my old girl.
It's true about measuring your life by your dogs.
Thanks-
Reactions: popx5, wdlfbio and jer dog
Upvote 0

Last bird… Tuesday morning Case pointed this rooster. He was running the dike 200 yards ahead of me in a hayfield. When he got 20 yards from the end of the field he turned right and locked up. Couple minutes later I got there and this rooster flushed. I hit him so hard it looked like a feather pillow exploded. Damn bird kept flying to the next field which was freshly cut a good 1/2 mile and landed. We went to the truck and drove over to the adjoining field and case locked up again on the wounded rooster.

Early this morning Case passed. He ate a good thanksgiving dinner with all the fixings, but I could tell he was near the end. At 12:30 this morning the finest dog I’ve ever seen died in my arms. RIP buddy…. So sorry for your loss Pop. Dogs become real members of our families...especially one so fine as Casey. I have read many of your posts over the years, here and on other forums. I know what a passion upland hunting with your dogs is for you. From what I have read in that time it seems you are a solid family man too. You have my respect! I believe we will see our beloved pets again one day because God is good. I pray for peace, comfort and healing for you and your family in this season. Treasure the memories and enjoy the next journey with the new pup! God bless, Mark
Reactions: popx5
Upvote 0

So Friday morning my original plan was to be back in the IV by 8:00 and continue looking for roosters. Instead, I was at the vets to drop off Case to be creamated. I arrived at the vets office at 0750 and could visualize case ready to run a field. All excited to get the “ hunt em up “ command. I always waited till 8:00 to let him loose. At 8:01 the receptionist unlocked the door. I hate when people are late. I’ve always buried or taken my dogs to a special place in the woods, marsh or desert after they died. I’m going to spread Casey’s ashes at various place I remember him doing something exceptional. A long retrieve on a cripple, tracking and cornering a crafty old rooster, pinning a covey of running chukar against a rock outcropping. So many bad ass memories.

After dropping him off I went home to grab a few more things ant Otis, my pup.

Friday evening we entered the same field Case pointed his last rooster. Otis is having a ball. Pointing dickie birds and chasing butterflies. Honestly my mind is thinking of Case the whole time.

Otis is locked up for the 10th time, but this one’s different. He’s solid and his lips curled. I can tell he’s found a real one. He’s taking long deep breaths, soaking up the sweet scent.

As I approach, he slowly creeps. His head is high and his nose is pointed directly into the wind. We slowly walk side by side a good 40 yards, and a rooster explodes at our feet.

I shoot a Belgian Browning superposed superlight in .20 ga. It was my father’s. As I come to shoulder and slide the safety, it won’t release. It’s happened before and I’m pissed. At times, if the selector for the barrels is not all the way placed on the selected barrel, the safety won’t slide off.

The rooster gains his freedom, but Otis learned a great lesson. There’s more in a hayfield than dickie birds and butterflies.

The next few days, Otis finds and points many hens.

Today, he graduated kindergarten and entered the first grade…

The first field we entered, he goes on point a good 80-100 yards ahead of me. As I approach, I see the curled lip. He’s solid. A hen flushes and he breaks. A few seconds later he locks up again and as I approach, a rooster explodes. No safety failure this time and I crush his first rooster.

Ten minutes later, he locks up again. Another rooster.

We killed 2 roosters in 25 minutes.

It got really windy in the afternoon so I decided to work him on marking and retrieved dove. He did a great job. 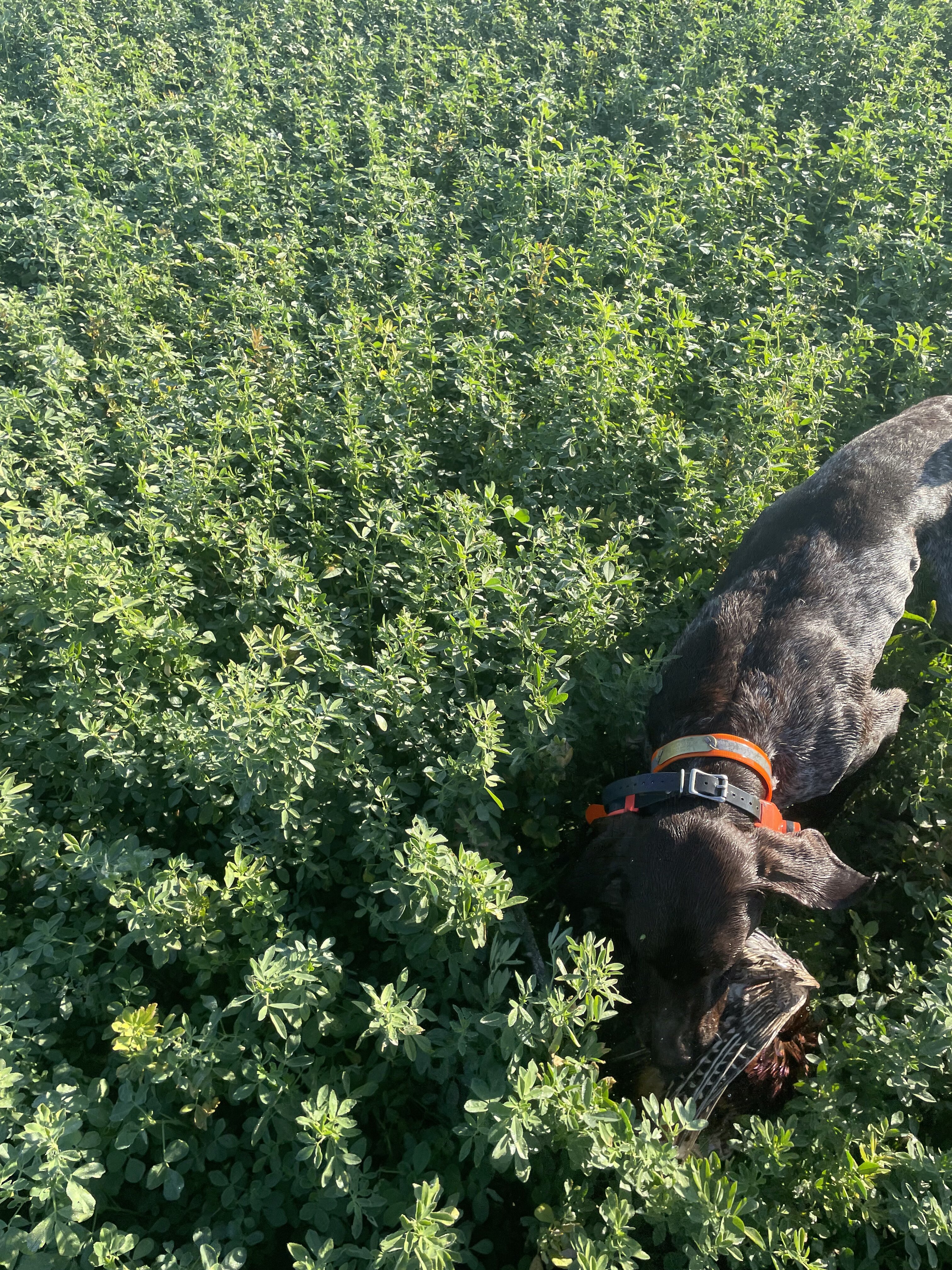 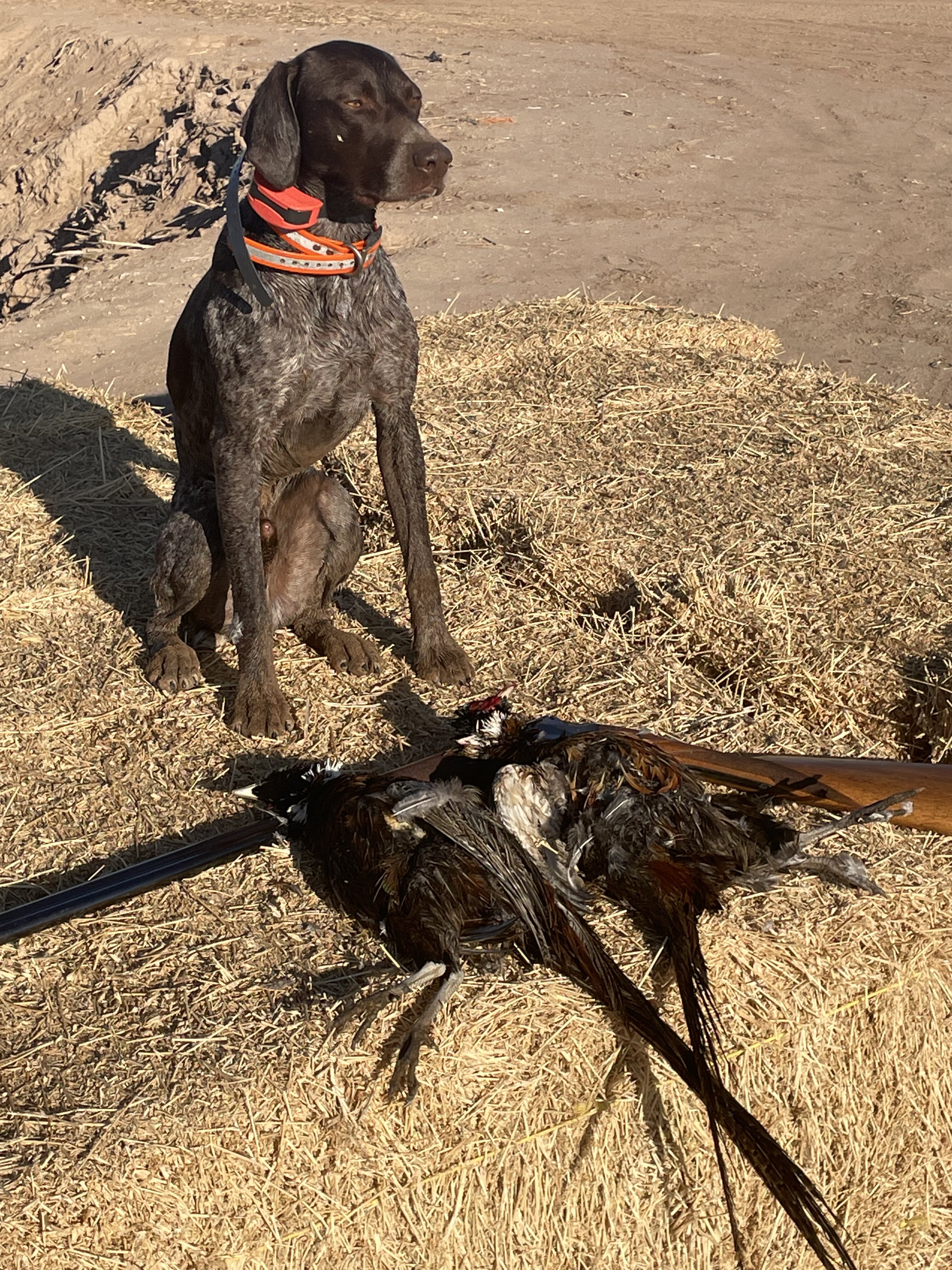 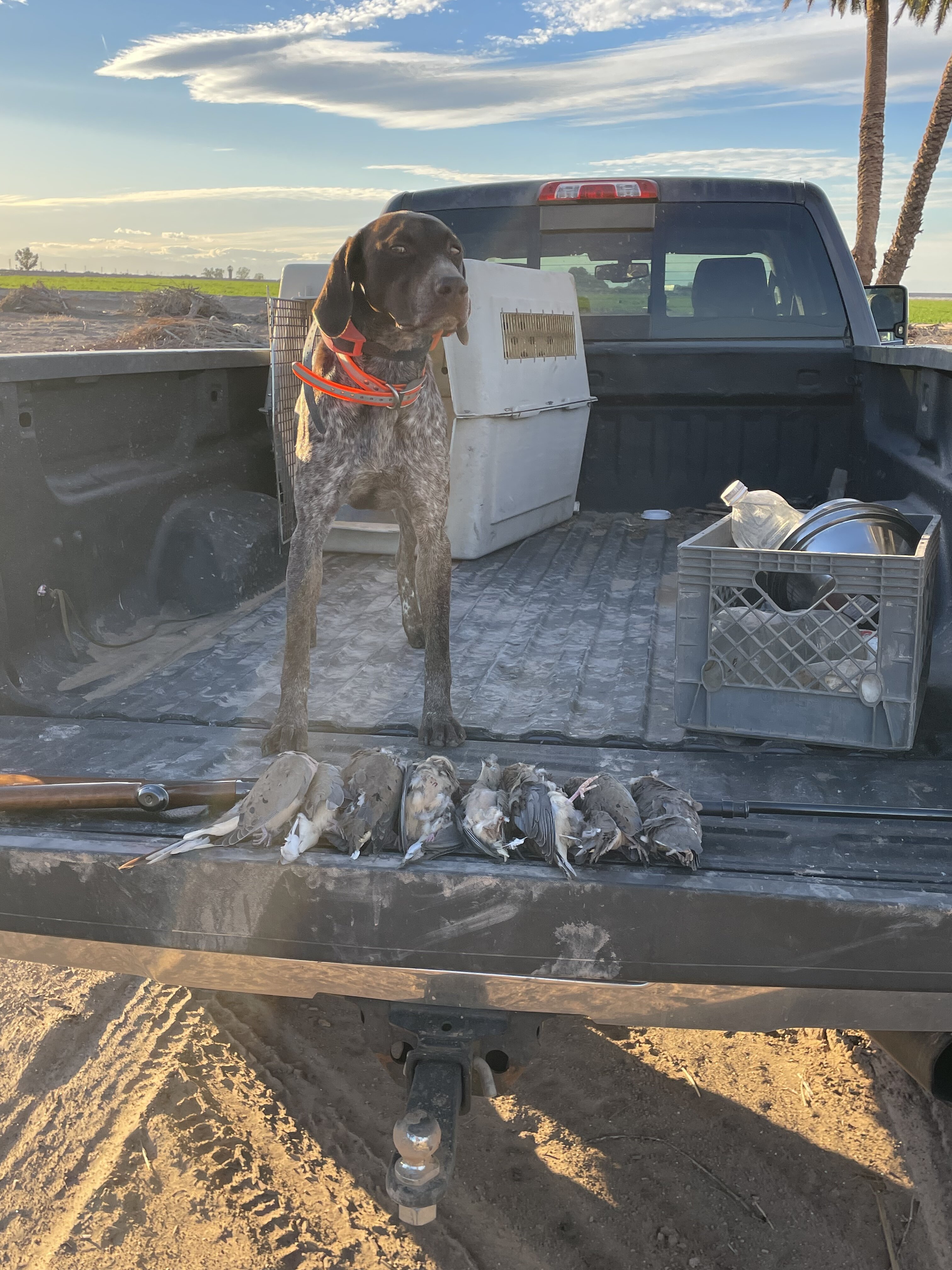 Waterfowl (back to Idaho)