So I had a score to settle with the ifs and what’s and why’s that left me before I would fall asleep since the last time.

My last somewhat extended trip for a larger grade model was on the Poseidon on a 1.75 day trip. We limited, but I lost a larger grade fish on the sinker rig that the skipper (who helped fight it) estimated was a good 150 plus fish. That was late June and a lot of replay this and that was still plaguing me. I signed up about a month ago for this two day trip. Factoring in that mid October is a good time of year, late Summer / early Fall if you will….water temps steady. Happy with my roll of the dice. Then that mother F’rr rolled in last weekend. Trips were cancelled and Tanner and Cortez banks showing 25 plus knots and seas above 15 feet. It was a let down but the forecast showed some cleaning up 10/12 and hopefully by 10/13 it would lay down some.

My support system…my wife, dropped me off at H&M Wed at 5:30pm. She now saw first hand the first obstacle to overcome in any trip, the parking and unloading circus. I was happy to say the least as she dropped me curbside at the landing. I checked in at the window and off down the dock I trundled. Stood in line for a bit as the boat was off getting fuel and bait.

I was stoked as this was a Seeker sponsored trip. We loaded up and I was happy to score a middle bunk through some creative understanding of their manifest signing in system. Junior was our skipper and a great crew on board. We left at or around 7pm. We had the usual in galley briefing and then Junior handed it over to Dennis from Seeker. From the moment Dennis started talking I knew this was a good guy. His genuine approach to telling everyone that he was there to help in anyway possible was so sincere. He raffled off a nice bait stick, had hats for everyone and then engaged in great conversation outside the galley. He busted out the spring scale to assist everyone in setting drags correctly if they wanted it. Not once during the trip did he push anyone on product, he was like a Yoda on knowledge of anything to do with fishing and offered help anytime he could.

So anyway we were underway, first couple of hours smooth and then about 2am we hit outer waters and shite conditions. Woke up to grey light Thursday and pitching and rolling but I knew it would get better through the day. Some great ppl on board..Marty and his boss Brenda, Donny and his son Donny jr. It was Donny jr’s 12th birthday so I made mental note that if I hook up he gets called. Marty made it happen around 11am on Thursday morning with a 15lb bluefin he handed off to the young man. Only other fish caught that Thursday was lingcod since we were on a high spot on the banks.

We had dinner and the seas calmed, the moon was out, weird gold / brown glow to it. I was now ready for what I came for. I knew this night would be all about the flat fall / knife rig game. I was happy to be where I was, engaged in good conversation with Dennis, Marty and Donny Sr. Life is good.

12.30 am Dennis gets picked up, being the pro he is gets his fish in and we are all happy after it comes over the rail. It’s easily over a 120lb fish. One other passenger hooks up after and it comes aboard. I’m at the middle of the stern, dropping and a grinding and finally, I’m tight!! I’m using a knife jig with the hooks swapped out and an avet hx raptor two speed with Graftech rail rod. It starts out good and up to the bow we go, back to the stern we go, starboard side, port side and off the bow again. We go over the anchor once to starboard side and back over to port side. At this stage my back his spasming so I hand off for 5 mins. Take it back again and now the skipper, Junior is up front to assist as is Dennis….my fish has decided it’s a good time to pay attention to two other lines in the water and try it’s hand at making spaghetti noodles with the white braid that’s there. Junior and Dennis are hanging over the bow making sense of the mess and my line goes slack for a second and then loads up again….wind, wind, wind are yelled and I do so…2 mins later the gaffs are in and the lifting starts followed by the “whumphf” of the fish on the deck. I cannot put into words the feelings now going through my mind…I started fishing at nine years of age in Ireland and now at 50 have a fish that took 30 mins to land and bring on the deck.

As the seconds go by and reality sinks in both Junior and Dennis turn to me smiling and ask me do you realize what just happened? How the Fuck would I know I says to myself in my head…I’ve got a bluefin kicking ay my feet and a pure adrenaline rush….snapping back to reality I ask what? Junior explains that while trying to deal with the tangle the fish spat the knife jig, momentarily was a free swimmer but since the jig was still glowing spun and inhaled it again. He told me he has never seen anything like that. I just stood and smiled, looked to the heavens and a tear rolled down….the ones you love and miss so much are always looking out.

It took me about 30 mins to come down from that state of mind that goes along with something that you’ve dreamed about…it was accelerated by the visceral call for gaff! Gaff!! gaff!…..Marty had hooked a larger model that decided it would be a good idea to come to the boat green in about 7 minutes and politely present itself for a sticking. I was walking past this commotion to the bow to retrieve my cut off jig when a voice inside said time to pay it forward. I grabbed a gaff and on direction from those that knew better stuck what was the third gaff in the fish. Never have I felt such pure power and stress in seconds as the gaff now started to go down through my hands as I was holding it…seconds later and the coordinated count of 1, 2, 3, commenced for two times and the fish hit the deck.

We finished the trip with I think 5 bluefin and a lingcod. Dennis, Marty and myself decided to split our fish amongst everyone. 31ppl on the boat and a lot had driven from 20 mins to 9 hours away. It was all that I’ve been dreaming about and tonight there are no if’s, what’s and why‘s…now for next year that’s a different story.
Toggle signature
Irishman

Fishing is fishing...but what the mind catches is unreal and very hard to translate into words.
Reactions: FLLR1, fishymeister, Y E T I and 27 others
Upvote 2 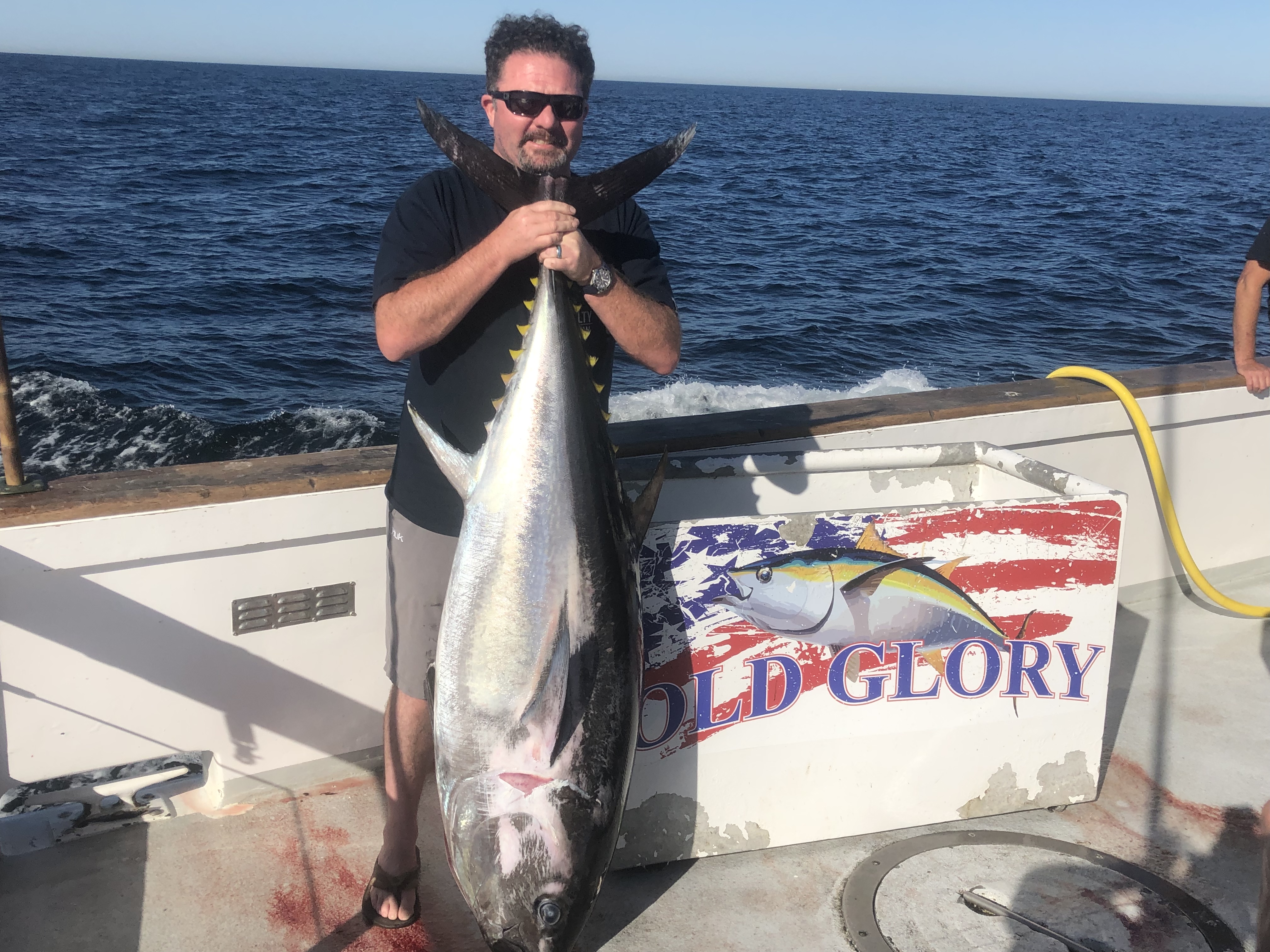 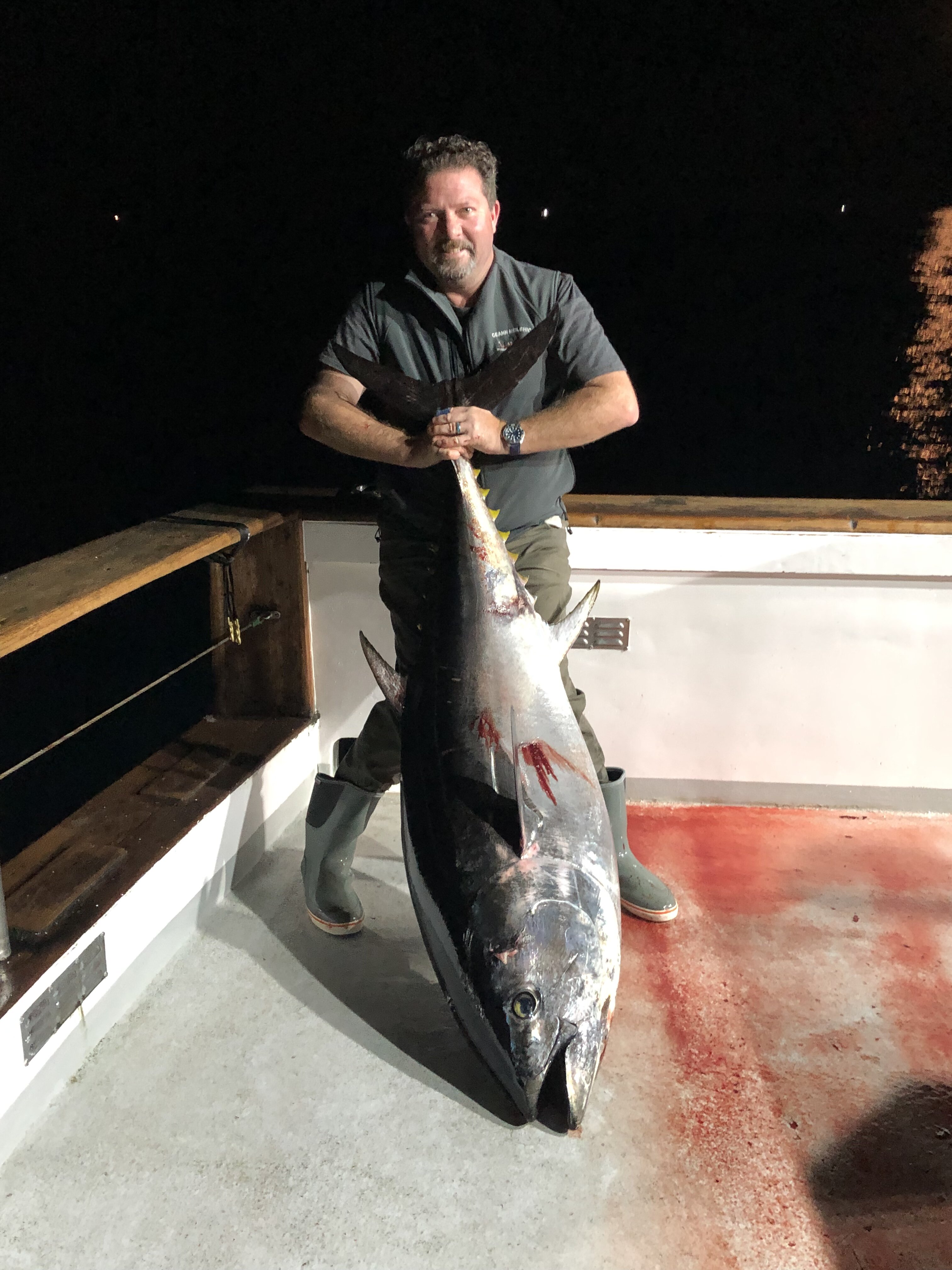 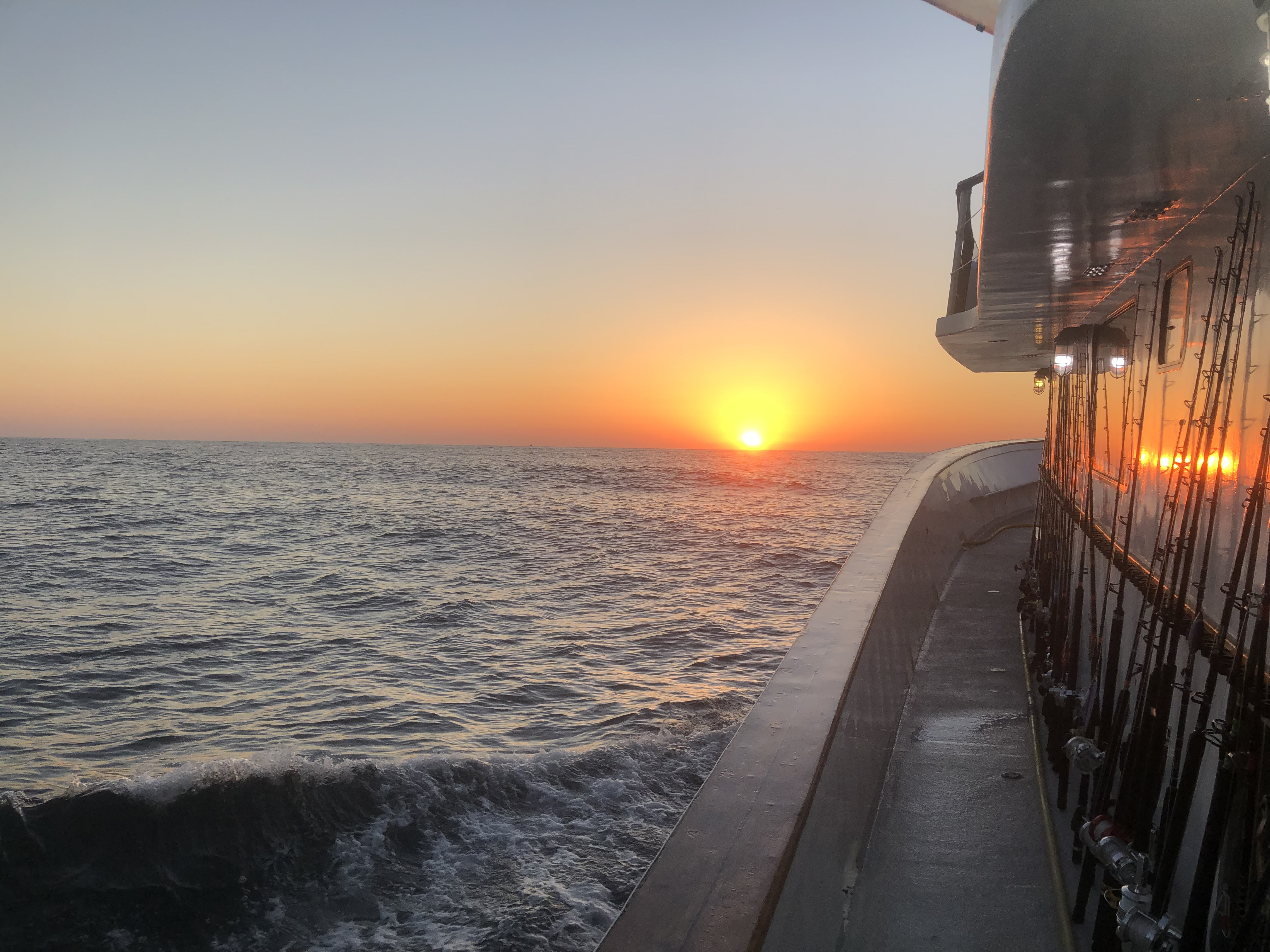 Fishing is fishing...but what the mind catches is unreal and very hard to translate into words.
Reactions: fishymeister, bajaspearo, Charlesregan and 25 others
Upvote 0

Every trip has a story and yours is a special one congratulations
Reactions: Tunahead and watersdeep
Upvote 0

Congrats on that fish! Seems like that first jumbo is always the hardest. No idea how Junior could be so certain of that “rebite” scenario without a camera in the water but it sure makes for a good story!
Reactions: Tunahead
Upvote 0

Fishing is fishing...but what the mind catches is unreal and very hard to translate into words.
Reactions: Tunahead
Upvote 0 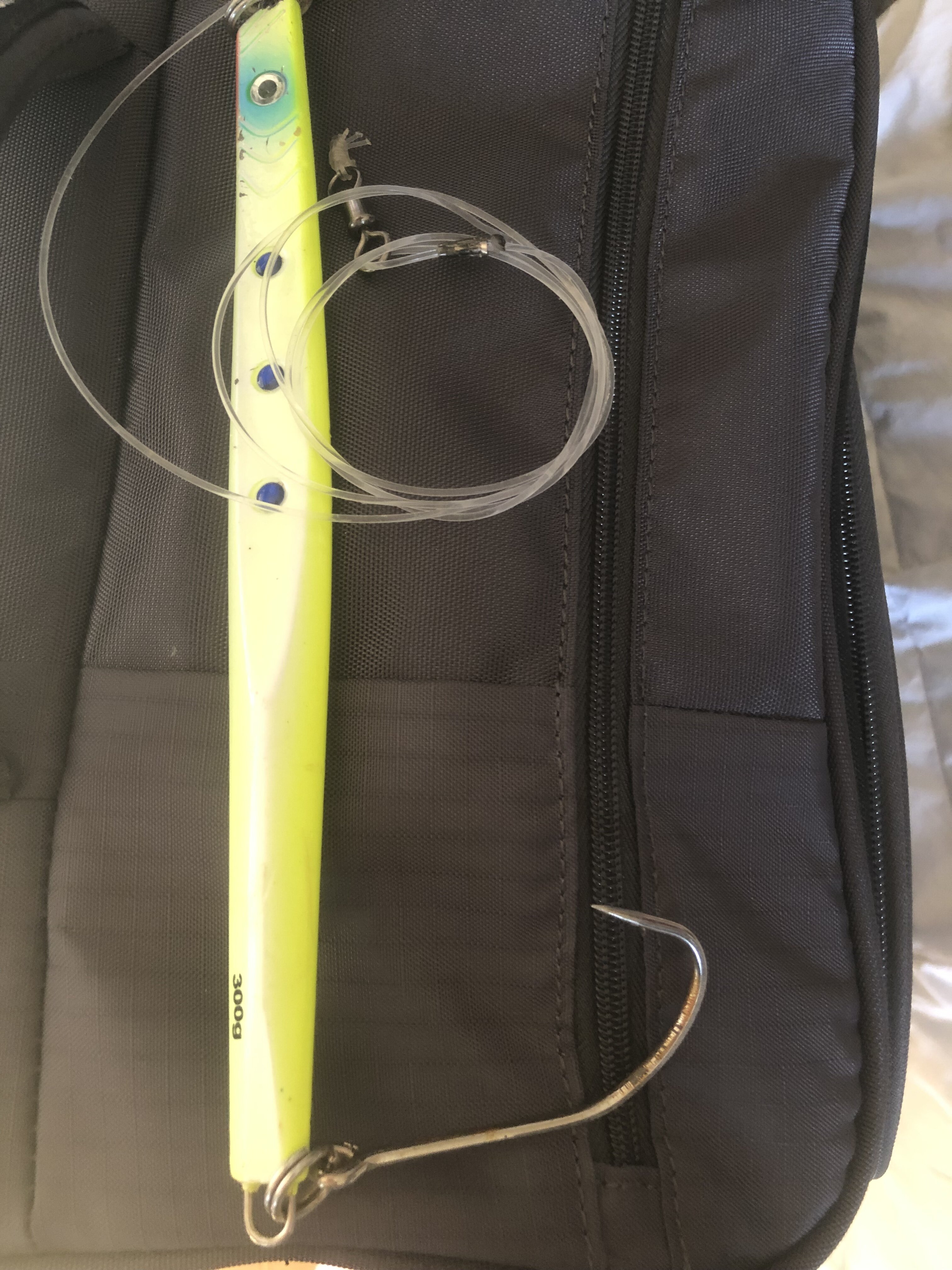 Fishing is fishing...but what the mind catches is unreal and very hard to translate into words.
Reactions: Anders1, pacificscout, Tunahead and 2 others
Upvote 0

what did your first paragraph mean?
Upvote 0

Great play by play and way share he bounty you will be rewarded down the road.
Toggle signature

Awesome report/pics and read Alan. Glad
you got what you went for! SUCCESS!

Solid work, and glad it all worked out.
Upvote 0

Great job and congrats . I love that feeling . I hope you learned your lesson on those skinny little hooks ! Lol !
Upvote 0

It was about the constant replay in my head as to loosing the large fish on my 1.75 day…..what could I have done better???

mike82 said:
what did your first paragraph mean?
Click to expand...

Nice write up. Nicer that you shared the bounty with others.
Upvote 0

Nice story. I enjoyed this!
Upvote 0