As we move through October, we are beginning to see a better grade of both yellowtail and dorado moving into the waters surrounding Isla Cedros. This stands in contrast to the fact that our late summer fishing was focused primarily on larger concentrations of school-sized fish in respect to both of those species.

Although they were greater in number, the larger and more solitary bruisers that are dreamed of by anglers visiting Cedros are a welcome sight. Most of them are weighing in at over 40 pounds and were likely pushed northward by hurricanes and tropical storm activity much further south. These fish may not be as prolific as the schoolies, but they provide far more rod-bending delight to any angler who is lucky enough to hook up with one of them.

Among those fortunate enough to get a piece of this action was veteran salt and freshwater angler, Gary Griffin, who was paying his third visit to Cedros Island, along with his friends, Rick Lea, and his son, Charlie.

Griffin commented, “This was our third trip to the Island, and it was a great trip in every way. The entire staff is extremely professional, and obviously loves what they are doing. On the first day, we landed on Cedros at about 11:00 am and were already out on the water by 12:30.

We immediately got into the yellowtail, and ended up with three limits of five fish each by 2:30 in the afternoon. On the next day, even more yellowtail, as well as limits of good-sized dorado.”

Griffin concluded with the tongue-in-cheek comment, “It was really a perfect trip, but I hate giving such a positive report, I wouldn’t want it to reduce our chances of getting another reservation next season.“ 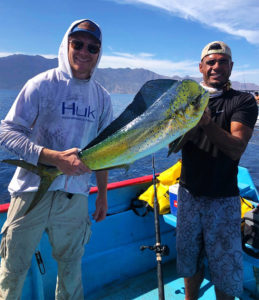 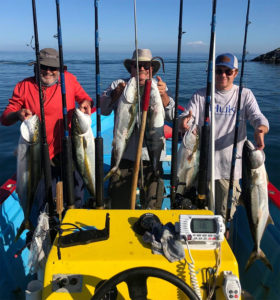 Aiken commented, “We caught most of the bigger fish just outside past the airport. We fished with some iron, but most of the big ones ended up biting on one of the live mackerel that we were slow-trolling near the surface.” 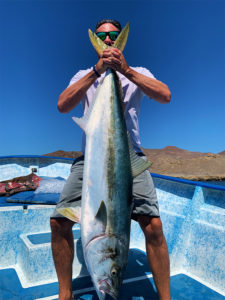 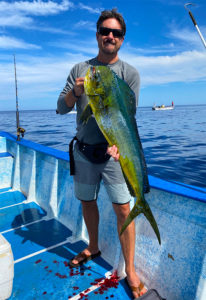 Chad Carruth flew down to Cedros with his dad, Vance, and his 11-year old son to give him an opportunity to learn what saltwater sportfishing is all about.

Carruth reported, “Thank you so much for such an amazing trip. It was the trip of a lifetime for my son, Sean. We were able to catch a bunch of big yellowtail, California sheephead, and the biggest calico bass that I have ever seen!”

He continued, “We caught the yellowtail while trolling live bait and by jigging blue and white irons. The big sheephead loved the cut bonito that we dropped to the bottom, along with a few of the calico bass. We also caught the biggest yellowtail of the trip that day.” 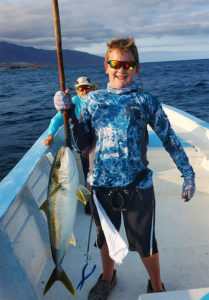 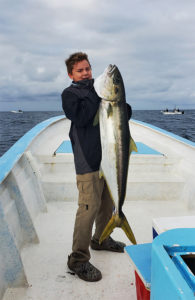 Carruth concluded, “This was the third trip to Cedros for my dad and me, but with Sean along, it turned into a classic fishing adventure, which was thoroughly enjoyed by 3 generations of fishermen from our family. It was an awesome trip!”

One thing is certain, if the mild and sunny weather continues and more warm water keeps making its way northward, 2021 may turn out to be a banner year for the happy anglers visiting Isla Cedros.
Reactions: marlyn, jiggermyster, diseasedscrotum and 6 others
Upvote 1

Can’t wait til my boy is old enough. Definitely a trip I want to take him on. Nice report and good pics.
Upvote 0

My wife and i will be there Oct 30, any Of you guys headed there at that time?
Toggle signature
I CATCH IT. I KILL IT. I CLEAN IT. I DON'T DELIVER IT!
Upvote 0
Show hidden low quality content