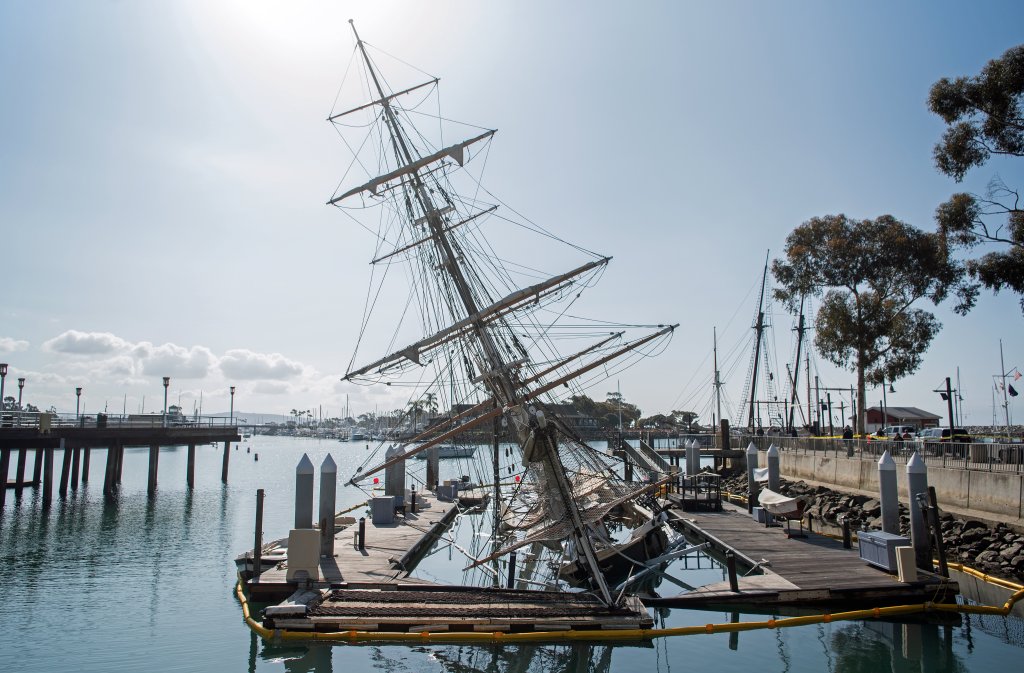 It was not clear Sunday what caused the ship to sink. 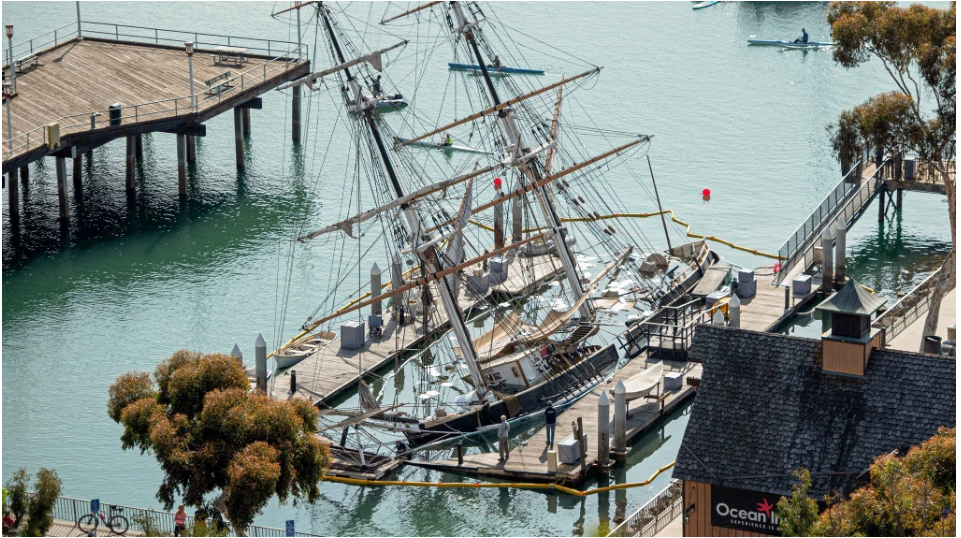 Now I love our Prezzz!!!

That's and easy answer, it's water in the hull, or else someone put to much shit in it!

Ducker!
Expand signature
Remember: Don't make us old people mad. We don't like being old in the first place, so it doesn't take much to piss us off!
G

I like the quote from Mr. Goldbacher. Lol
Expand signature
"What is the MLPA anyway? They are the meanest people ever!"

Source/Credit: Copied and pasted from the OCRegister

The Pilgrim, a decades-long icon at the Ocean Institute, listed starboard over the weekend and began sinking in Dana Point Harbor.

Officials were informed at 5:15 a.m. Sunday, March 29, that the beloved vessel, which served as an inspiring real-world classroom to hundreds of thousands of students and visitors, heeled overnight in the slip at the Ocean Institute’s dock.

The ship — a full-scale replica of the ship immortalized by Richard Henry Dana in his classic book ‘Two Years Before the Mast’ — was a favorite during the Ocean Institute’s Tall Ships Festival.


It was not clear Sunday what caused the ship to sink.

Sheriff’s Harbor Patrol Lt. Chris Corn said institute officials had been battling a slow leak, but it was said to be under control. He spoke with Dan Goldbacher, director of Maritime and Facilities, who told him that the leak was managed with a pump.

“Something was different than it was yesterday,” Goldbacher said on Sunday.

Institute officials said they have been vigilant in the ship’s maintenance, and the Pilgrim underwent regular out-of-the water and underwater inspections. In 2016, it was hauled out for survey and repairs and in October 2019, the institute began fundraising to support the haul out and repairs scheduled to take place in January. The haul out was postponed until June due to overload at the shipyard, said Wendy Marshall, executive director of the institute. Meanwhile, the institute has maintained its certifications with the U.S. Coast Guard.

Now, Marshall said, the ship is likely beyond repair.

“We are sad to bid farewell to this iconic vessel which has been such an important part of the Ocean Institute’s programs and to the children they served,” she said.

The Pilgrim is valued at $6 million.

By midday, the ship’s crew were pumping out the remaining fuel from the tanks and working with deputies and a local sea tow company to get the Pilgrim upright. The ship will be lifted by airbags. Officials will determine if it can be towed to a shipyard.

As with any sinking vessel, Corn said, a typically small amount of fuel gets into the water and will evaporate. Officials from the U.S. Coast Guard and the Department of Fish and Wildlife were also there to monitor the recovery.

News of the Pilgrim’s demise spread throughout the harbor, through the city and to thousands of the institute’s supporters early Sunday.

In 21 years of teaching at Cardon Conejo School in Westlake Village, “The Pilgrim was my constant” said Sadhana Sharma, who has taken more than 500 students, including her own son and daughter, to the ship’s living history program and was just on the Pilgrim on March 10.

On that night, she said, “I stayed up the whole night, a silent shadow on the bow. That night was Pilgrim’s last full moon. I loved every moment on it with the heart of a lover, a story keeper,” photographing “every nuance of light, the wind and the ripples of water.”

Said Mike Killebrew, Dana Point’s city manager: “Heartbreaking. I’m at a loss for words, “The overnight stay on it was a life experience. All of our three kids still talk about it.”

By 9 a.m. more than 100 people were lining the sea wall near the dock.

“People have been lined up for hours,” said Corn, who also was devastated to see the ship sinking. “With the parking lots closed off (due to coronavirus restrictions), people have been coming on bicycles and walking their dogs.”

Harbor Patrol deputies also had a patrol boat out keeping paddleboarders and kayakers at a distance from the sinking ship.

Institute officials last week put out a plea for help after coronavirus restrictions shut it down. The nonprofit was just ready to unveil its $1 million new live shark tank exhibit and hold its annual fundraiser. School field trips are also canceled cutting off more than 60 percent of its needed revenues.

Each September, the Pilgrim and maritime history are celebrated in the institute’s annual Tall Ships Festival.

Since the Pilgrim went into service, more than 400,000 fourth and fifth-graders from throughout Southern California spent nights on the Pilgrim as part of a living history program every fall. Students learned about early California development and the area’s maritime history.

“We put them into challenging roles where they learned to become leaders,” said Goldbacher. “They became mates on each cruise. Like sailors in the 1830s everyone had to be on the same page to make the ship work. They learned how to rig the ship, prepare meals and row boats into the harbor to get hides. It showed them they had to push themselves to accomplish goals.”

The institute’s replica Pilgrim was modeled after the original ship of the same name built in 1825 at a cost of $50,000. The purpose of its 1834 voyage was to participate in the California cattle hide trade for the ship’s Boston owners, Bryant and Sturgis.

The Ocean Institute’s Pilgrim began life in 1945 as a three-masted schooner plying the Baltic coastal trade out of Denmark. In 1975, it was sailed to Lisbon, Portugal by Captain Ray Wallace, the noted marine architect, where it was converted to the present rig.

Skip Wehan, who was the Pilgrim’s captain, still remembers the day the Pilgrim sailed into Dana Point Harbor in September 1981.

“I’m shocked and so sad,” Martinez said. “We will all treasure those memories and the opportunities it provided my students and myself.”

Jim Serpa, former supervising ranger at Doheny State Beach, would get water for his exhibit’s aquariums next to the Pilgrim.

“I’d sit and listen to the children’s activities on board the Pilgrim and I’d think, “I would only have dreamed about that when I was a little kid, and how lucky they were,’” he said. “So, if it can’t be saved for them that is tragic for all the future kids that will miss out.”
Expand signature

Sad. We just visited the Pligrim a month or so ago at the Ocean Institute open house. It is a classic tall ship that hopefully can be salvaged.

So bummed! Was so glad my son got to do an overnight on her.
BTW "Two Years Before The Mast" is one of my favorites. A great read.

Bummed. Both our kids did the overnight thing on her.

I am told from reliable source the Pilgrim had major termite damage.
Reactions: BiggestT

Seems like a flex seal commercial opportunity like no other... you just slap it on an off you go!
Expand signature
Yellow tail, Lobster tail, Split tail it's all good!!!

This was from a buddy about last summer.


our 4th graders did the tour in late Sept and the crew suddenly announced that there was a pump issue below that made it not safe to spend the night, so the kids had to sleep on land.


My guess is they had some slow leaks, with what's going on no one checked the bilges or pumps ... The end.

““Something was different than it was yesterday,” Goldbacher said on Sunday.“

Yeah, the f’n Pilgrim was not as tall as it used to be. Duh.

Wooden ships can be rebuilt plank by plank, frame by frame. It is not a total loss unless there is no desire to raise it , get it to a decent yard and rebuild it. Just a matter of funds for those poor Supervisors of Orange County.